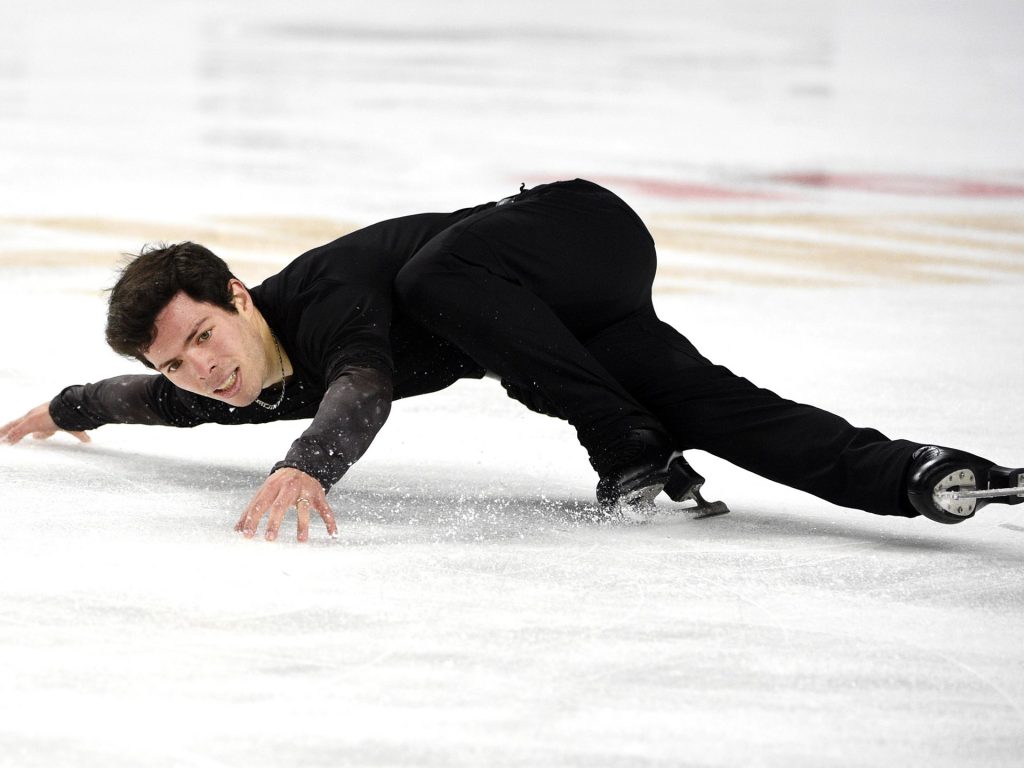 It’s true, these are different times, but nobody on the planet prepares for a world figure skating championship the way Keegan Messing does. Nobody.

The rope-climbing, ladder-ascending, pole-clinging, Lazy Boy-toting, Husky-loving, old car-tinkerer and iceberg paddler of a mountain man from Alaska had to resort to new tricks during a pandemic. The gym was closed for ages. Even when it reopened, Messing viewed it suspiciously. So he set up his own off-ice training circuit at home.

But it is hardly like Michael Marinaro’s “sweet” gym in Oakville. When Messing needed to lift weights, he hoisted car batteries – each weighing 36 pounds, one in each hand, doing one-legged squats. Other times, when he needed a different weight, he grabbed a chainsaw and heaved it aloft, too, while doing one-legged squats. There is a photo of him somewhere on the internet doing this.

He calls them “random odds and ends devices for weights.” He also snagged a rubber mat from the rink so he could do jumps off-ice, without having to land on hard concrete. The 5-foot-4 skater would almost hit the ceiling.

His opponents perhaps need to bear all of this in mind. They will encounter a 29-year-old with steel in his veins. And a sense of adventure.

Up there in Alaska, he has no television on which to watch competitions. No Wifi, either. He sees skater videos on his mobile phone, but is careful not to run up enormous costs on it. He admits he has “a nasty habit” of forgetting about all the upcoming competitions (unless he is in it).  Indeed, he stands alone in his snowbank. (It snowed a foot last week, another four inches a night ago. Still he’s holding himself back from skiing in the mountains, his biggest task in the offing.)

He says since November, he spent some of his time building an ice rink in his backyard. He doubled the usual size of it, but because his yard slopes downward at the back, he built up about two feet of ice at one end. He built ramps, too, all the better to launch himself from. A “crashed ice course,” he said. “I built some pretty sweet features out there.”

When he was named to the world championship team, he told himself: “Well, it looks like I’m not going to be able to do any of these features, yet. So it’s like I’m really taking this world spot seriously. I’m definitely putting some of my wild side on the low burner.”

Wild indeed. Although he has never won a Canadian title – always a top contender, mind – he snagged the lone Canadian men’s spot for the world championships in Stockholm, Sweden next week. There was no national championship to draw upon, only a virtual qualifying event that Messing couldn’t access because of logistics. So Skate Canada asked for remote videos of contenders’ short programs and a jump or two.

Messing was quite prepared to tape an entire practice session, showing them not only the quads he could land, but the ones he could not, just to be fair. He’s that kind of guy. But Skate Canada knew the subject well enough. It seemed to be a contest between Roman Sadovsky, last year’s Canadian champion, Messing’s bro, Nam Nguyen, who had won two Canadian titles and Messing, who has won medals at international events with big scores.

Last year, Canada had only one spot for men at the world championship in Montreal. Nguyen got that spot. But then the event was cancelled.

Messing said he was ecstatic to get the lone men’s spot for this year’s version of the global contest. He found out on Feb. 24. “There was a lot of mixed emotions, honestly, getting the spot.” He thought and hoped Nguyen would get it. The twosome, separated by thousands of miles, were on the phone sometimes twice daily, discussing it all. “Nam and I were both on Team Nam for the spot,” Messing said.

“So when I got it, he had nothing but support for me getting it, and I was also in the spot: ‘Oh man I thought you were going to get it, but I’m going to push this through and we’re going to do this together [in spirit].”

Getting the spot meant a lot to Messing, who used to skate for the United States, winning silver at junior nationals, with his best finish at the senior level being seventh. He shifted allegiance to Canada, his mother having been born in Edmonton, for the 2014-2015 season. “It showed me that Canada believes in me to go make a good performance, and at the end of things, to get two spots for the Olympics,” he said.

He’s not going for personal glory. A top-10 finish will give Canada two men’s spots for the 2022 Olympics. For Canada, Messing had an eighth-place finish at his first worlds (while finishing sixth in the short program) and 15th two years ago. He would not have gone to Montreal, if the event had gone ahead.

However, Messing stands alone in one thing: he is the only Canadian skater who was able to do an international competition at all this past COVID-damaged season. The Grand Prix events – the ones that did take place – turned into mostly domestic competitions. But Messing, living in Alaska, made it to Skate America where he took the bronze medal behind world champion Nathan Chen. There, he earned a healthy 92.40 points for the short program, although his top short-program score of 96.34 came at the previous Skate America, when he was also third.

When he won the bronze at Skate America last October, he dedicated it to his Canadian teammates who didn’t get an international (or even a real national) competition at all. He hasn’t seen any members of the Canadian team in more than a year.

“Going to worlds and seeing the team, I’m ecstatic,” he said. “I can’t wait to go there, see them, catch up, and really skate for them, skate to make them proud.

“I got to say, skating for the team at Skate America, it was one of the best things I feel I could have done. I took the ice, and even rewatching the video, I can see right before I took my pose, I could see it in my face, where I saw the team: “This is for you guys.’

“They have been going to the rink. They have been training their butts off for these competitions and getting the rug taken out from under them time and time again. And for them to be keeping their heads up, and still pursuing the sport with what they’re doing, I’ve got to hand it to them. They are being incredibly strong people that I really, really admire. And I am just very honored that I get to compete side by side with them.”

Messing is the first to cheer on his teammates. He always goes to as many events in other disciplines as possible. He applauds his opponents. He is a rare beast.

He is going to the world championships as a happy man. Beaming with happiness. Stoked at what life has given him. He and his wife, Lane, are expecting a child on July 4. (Lane, couldn’t you speed it up and have the baby on Canada Day, July 1?) They debated on whether to start trying. It was a hard decision. Now, Messing says, he can’t even imagine it being a hard decision.

“It’s everything I’ve always wanted,” he said. “I’m so excited for what’s to come and the challenges it will bring. I really feel like I’ve got more life left in my skating and I can’t wait to express it through skating.”

He already knows what a happy family life can bring to his skating. After he proposed to girlfriend Lane in October 2018, he went on to win a silver medal at Skate Canada International, and skated as if inspired. “I feel like it’s a very similar feeling,” he said. “I have this family backing me up. I have this wholesome feeling going into this competition, with this feeling of: ‘I can’t be brought down.’ I’m ready to take anything on…Right now, I’m over the moon. I even train harder than ever and I’m just happy on day to day life.“

That makes him dangerous. And he feels he’s ready for his mission, close to the top shape of his career right now. He’s only lacking a quad Lutz, a jump he’s been playing with for years. He says he’s trying it and landing it, but it’s not where he wants it to be to put it into a competitive program. His quad toes are humming. So is his triple Axel. He has reworked the program to put another triple-triple combo in it.

“Honestly this program we are bringing to worlds is going to be the most confident high-scoring program that we are ever going into worlds with,” he said. “I’m feeling very confident with our program and with my skating ability right now, even compared to season past, when I was a little bit younger.

“I’m hoping that old age and treachery will have its way here.”