You are here: Home / Archives for world figure skating championships 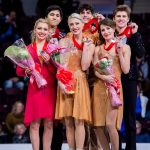 At last, the hammer came down. There will be no world figure skating championships this year, for the first time in 59 years when a plane crash killed the U.S. team and scuttled the most important event of the year. The Quebec health ministry decided to spare spectators and competitors and officials and […]

It was telling: Kirsten Moore-Towers burst into an ugly cry against the chest of her partner, Michael Marinaro, as soon as they took their final pose after the short program at the world championships in Milan on Wednesday. Surely they were tears of joy? They had just nailed it, big time: triple twist, whopper of […]

Just as Kaetlyn Osmond was about to make her way to the world figure skating championships in Helsinki – only her third – the value of silver, down in the doldrums on world markets, began to pick up. The ticker tapes of the world began to spin in the right direction. It’s good news for […]

BOSTON, Ma. There is only one thing certain about the pair event. It is unpredictable. Certainties are never certainties here. Banks don’t deal in this currency. The scales of justice are forever tipped in the direction of the fearless and the brave. And apparently, that’s what Meagan Duhamel and Eric Radford are: mindfully, powerfully adept […]

Perfection is a tough goal. When Meagan Duhamel came off the ice after the pair free skate at the world championships, she said: “I don’t know if it’s enough.” Well, it was. Duhamel and Radford won the first world pair championship for Canada since Jamie Sale and David Pelletier 14 years ago, with points to […]