You are here: Home / Uncategorized / Ilyushechkina and Moscovitch: skating for the Maple Leaf
Tweet
0 Shares

Lubov Ilyushechkina is glowing. Positively glowing.
She and her pair partner Dylan Moscovitch will go to Skate Canada next week as a completely Canadian duo. On Sept. 21, she became a Canadian citizen.
“It was definitely a big day for me,” Ilyushechkina said. “Being Canadian means being warm and friendly. And I also associate Canadians with being very friendly. I always felt supported and welcome and now I am proud to call myself Canadian.” 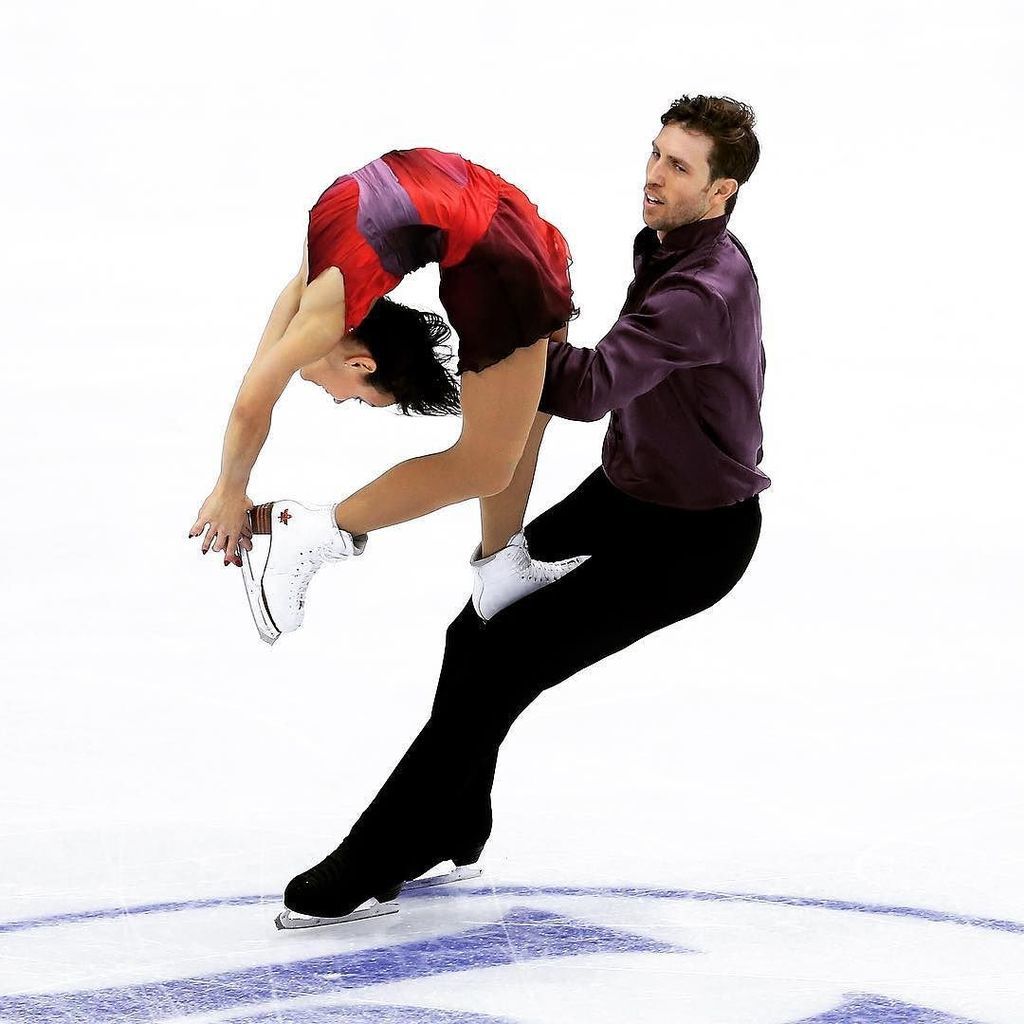 She’s changed, personally, since she came to Canada from Russia to skate with Moscovitch after the Sochi Games.  “I started thinking more about people,” she said. “I became more open and more talkative.” She has more friends, she said.
“It was one of the proudest moments of my life,” she said on an Instagram post with Moscovitch, posted during Citizenship Week. “To be Canadian means to be warm and friendly.”
“To look after your neighbour,” Moscovitch said.
“To be accepting,” she said.
“To be inclusive,” he said.
“To do things right,” she said.
“To be concerned with issues domestically and abroad,” he said.
Her new Canadian citizenship will allow Ilyushechkina to represent Canada at the Olympics next February. It’s been years in coming, but it arrived just in time. While Moscovitch has been to an Olympics before, Ilyushechkina has not. “I can see the level of excitement is higher at our rink,” she said. “It is, too, for me, but I try not to get overthinking.”
The twosome started off their new penny of a season a few weeks ago at Finlandia Trophy, where they finished fourth overall, and third in the free skate. The reigning Olympic silver medalists, Ksenia Stolbova and Fedor Klimov had a nightmare of a free skate, a meltdown in fact. and finished behind the Canadians in that portion, but they outfinished Ilyushechkina and Moscovitch by 1.48 points overall.
Ilyushechkina and Moscovitch were buoyed by their sixth-place finish at the world championships last March – the top-finishing Canadian pair – but Finlandia wasn’t their finest moment. It was not a meltdown, but as Moscovitch put it: “sloppy.” That performance gave them a kick, as they realized they had left points on the table that they could easily have snatched. They’ve bucked up since.
“It kind of set us on track for where we need to be leading into the Grand Prix,” Moscovitch said. “Since coming back, I would say we stepped it up quite a bit. In terms of the quality of our training and just our mentality and approach day to day, I think we’re getting ready properly for Skate Canada.”
They were fit enough in Finlandia, but their training wasn’t. Too many details lost, too many silly mistakes. Some are expected early in the season. Some just not what they planned.
Their triple twists were a little tight in both programs. They got no marks at all for a pair spin in the free. And they had some jump issues, an underrotation here, a double there, and two-foot landing, too. Now they want to ensure they do enough rotations in the pair spins, make the changes smooth. “ It was just a reminder for us to hold our standards to a higher level while we are doing our run-throughs,” said  Moscovitch. They have been working on evolving the sharpness and clarity of movements in both programs.
Movement is extraordinarily important in their short program, to “In the Air Tonight,” by Phil Collins, a routine choreographed by David Wilson and Marie-France Dubreuil. The movement is contemporary (are we surprised if Dubreuil is in the mix?) It has an edge to it.

“The short program is kind of speaking for us,” Ilyushechkina said. The words: “I’ve been dreaming of this moment all my life, oh lord,” rings a bell with them. “It’s a phrase that outlines our work and living towards the Olympics,” she said.
The free? Fasten your seatbelts for some angst as they skate to “At This Moment,” by Billie Vera and the Beaters. While Wilson enthusiastically presented the music for both programs, Sandra Bezic has also had a hand in choreographing this number. It’s a step up from last year’s routines, with more drama, a story about a relationship that is falling apart. “It’s about unsureness and love and a little frustration and trying again,” Ilyushechkina said.
“My side of the story is that I’m trying a little harder to hold it together and Lubov’s side of the story is trying, but she kind of knows that it’s not going to work.” There’s a back and forth, until they realize that it’s not going to happen. A relationship on the rocks.
Neither of them knew this song from the 1980s. “It’s another step up for us, another movement in the direction of growth,” Moscovitch said.

Both routines have the potential to become phenomenally emotional and beautiful to an audience. It’s all there. You can see it from the Finlandia skeleton.
In Finlandia, Ilyushechkina and Moscovith landed a throw triple Salchow as their fourth element in the free skate – but the program has been choreographed to allow a throw quad Salchow. Interestingly enough, Iyushechkina had never done a throw Salchow in any of her programs in the past. She’s learned it as a new element to her.
For the past couple of years, the team has been training throw quad Lutz, but mostly as a training routine. They never inserted it into a program. But this spring, they turned to the throw quad Salchow. And they’ve landed them. There are videos to prove it.
“We just thought it would be a good tactic to work on the Salchow, seeing that our Lutz is our short program triple,” Moscovitch said. “And sometimes the quad can make the triple a little funky.”
Back in late August, at the national team camp, Moscovitch said the move was “a work in progress,” but it’s coming along. “When it’s ready in the run-through, it will go for sure [in the free],” he said. “We’re hoping we can get it in early in the season to get some mileage on it. The goal is to have it in the program for the better part of the season.”
They worked on it a bit last year, but did only throw triple Salchows. They tried a throw quad twice, but they weren’t realistic back then. “This spring is when we really started putting some real work into it,” he said.
Now that they’ve been skating together for more than three years, their ability to work together has gelled. “It’s an interesting relationship,” Moscovitch said. “I don’t know if there are many sports where a man and a woman are in that kind of a relationship – at that level of trust. It’s a very unique kind of experience. It puts a unique set of strains on a relationship and I think over time, we’ve gotten better at it. It’s one of the main keys to becoming a successful pair skater – to manage those stressors and those challenges when you’re skating with someone every single day and physically relying on them.”
Yes, pair skaters are a different breed. And this pair has a new joy behind it all.