You are here: Home / Archives for Dylan Moscovitch 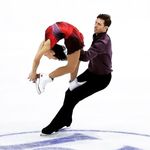 Lubov Ilyushechkina is glowing. Positively glowing. She and her pair partner Dylan Moscovitch will go to Skate Canada next week as a completely Canadian duo. On Sept. 21, she became a Canadian citizen. “It was definitely a big day for me,” Ilyushechkina said. “Being Canadian means being warm and friendly. And I also associate Canadians […]

In the early morning light – say 7 a.m –  a battalion of choreographers showed up at the Powerade Centre in Brampton, Ont. Their job? To create moving, arresting, complicated routines for the sixth Margaret Garrison Ice Show. In one day. In all, 29 choreographers lent their talents to this show. This show held extra […]

Obstacles, there have been many. Successes? More each day. Russian-born Lubov Ilyushechkina and her Canadian pair partner, Dylan Moscovitch have come a long way from the time last spring when they matched forces, first without a coach, and perhaps with little hope that Russia would release their 2009 world junior pair champion. But now […]

It wasn’t easy for Meagan Duhamel and Eric Radford, even though they won the Four Continents championship title by 18 points. The week seemed long. By the time they finished the free skate, they felt quite tired. Perhaps that’s why they missed that triple Lutz, with Duhamel stumbling and Radford hopping, something they rarely do […]