You are here: Home / Blog / Hardly Birds of a Feather
Tweet
0 Shares 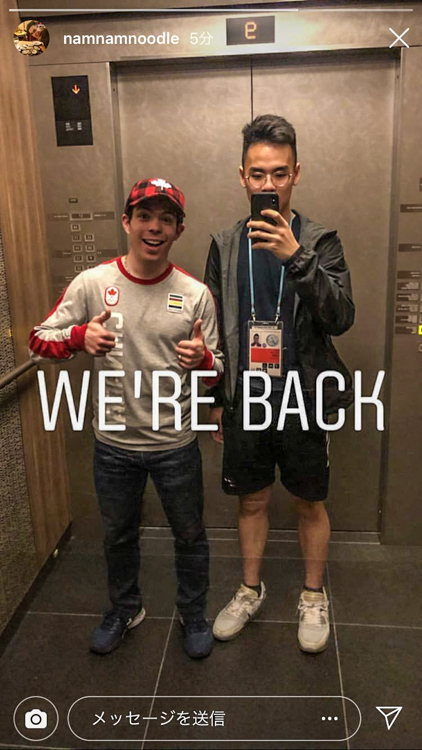 Ever see the internet photos of the cats curled up with canaries, cozy and all? Fawns and owls cavorting happily with dogs? Chimpanzees stroking kittens? Heifers licking up turtles with long tongues, happy as clams?

Count Nam Nguyen, the son of Vietnamese boat people and Keegan Messing, man of the north woods, in with those images. Over the past year, they have become the Two Musketeers, unlikely friends, making each others’ lives richer. And better.

“Oh god, I don’t even know where to start,” said Messing, when broached with the question of their amigoship.

They live 4097 miles (or 6,593 kilometres) apart, if you’re driving. It’s a trip that would take 72 hours and 48 minutes non-stop from Toronto to Anchorage, Alaska. Now that isn’t even close to reasonable, so the Trippi trip advisor suggests a drive with six overnight stops through Wisconsin and up through Saskatoon to Edmonton and points further north. In other words, these two don’t live next door to each other.

“It’s such an odd relationship,” said Messing. “We are really not alike, and that’s the funniest part: that we are very different people.”

“I honestly think what we have is pretty cool,” Nguyen said. “It’s kind of rare to find that in the skating world today. And I know a lot of people are thinking that it’s staged. I’m telling you, it’s not staged.”

He thinks they formed a bond over the past skating season because both had been assigned to all of the same competitions, all the same Grand Prix . “It’s been a great experience,” Nguyen said. “It’s helped me to get into the mood for competition. And hopefully, I do the same for him.

“He’s such a great guy, honestly,” said Nguyen of his other self. “I’m so lucky to have him around. We push each other to do our best. It’s really a great feeling.”

Nguyen said Messing first of all is a great “sportsman.”

We will never forget the sight of Messing applauding Nguyen’s fiery skate at the 2019 nationals, where Messing finished third behind him. “We all work too hard every day for this sport for us to even have an inkling of thinking ill of one another,” Messing said.

And Nguyen was aware of all that. “It’s incredible,” Nguyen said. “I learned a lot from him in that sense. I think that has helped me open up a little bit to people around me. I used to be just to myself, and not liking to communicate with others. But with him, because he is so out there, some of that has rubbed off on me, and he’s great to be around.” 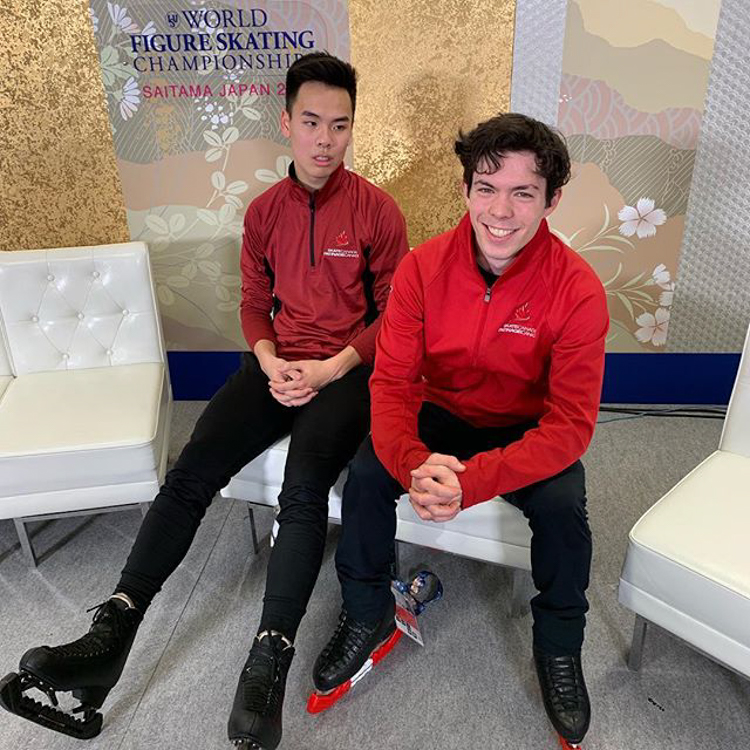 Nguyen said their friendship is based on jokes. Silliness. They are both hams, appreciative of the funny-bone side of life.  “Goofiness,” said Nguyen’s coach, Robert Burk, watching it all with amusement.

Messing was in Toronto recently to compete against Nguyen at the North York Summer Skate and the frolic continued unabated. Messing arrived three days early. The two of them spent almost every day, all day together.

They went for sushi together before the competition started. And then they went shopping, ostensibly to buy plain black outfits to compete in, because neither had a costume ready yet. They went to the most giant of all giant malls, Vaughan Mills in North York.

“I don’t do well in malls,” Messing admitted. “I get the anxiety when I go to malls or shopping centres, because I don’t like it. There are too many people. There is too much going on.“

One of his favourite things is to go out in the woods on a hike and do an overnight in a tent. Two weeks before Messing’s August 3 wedding to Lane Hodson, he and some friends went on camping trips. Both weekends. One was going up 3 ½ miles, up 3,000 feet to get to the top of the mountain next to a lake. They camped overnight. The following weekend, they trekked 24 miles in two days with full overnight packs. “It rained on us all day Saturday,” Messing said. “That’s not uncommon for Alaska. There are times when it will rain for a week. It’s not like the downpours you get here, but it’s this consistent rain. It just soaks everything.”

They have rain flies to go over their backpacks. Messing made sure to get his wife a really good rain jacket because she really doesn’t like the rain. He does, although once you get wet, it’s miserable, he said. “There’s nothing fun about getting wet, And all day. When you get to the point when your hands get soaked and they are starting to prune, and your face gets wet, that’s when it’s not fun anymore.”

Would he ever see Nguyen doing such things? “No, no, no, no,” Messing said. “Not ever. He doesn’t even want to come to Alaska because he knows I’m going to drag him somewhere.”

Messing invited almost the entire national team to his wedding. But they, including Nguyen, sent their regrets. Mind, it’s a 12-hour flight up to Alaska with a simple transfer, and not all the time are the transfers simple. “But with preseason and training, I almost couldn’t make it to my own wedding,” Messing said. “So I really don’t blame any of them. The day of, I was getting best wishes from the whole team. It was pretty special.” 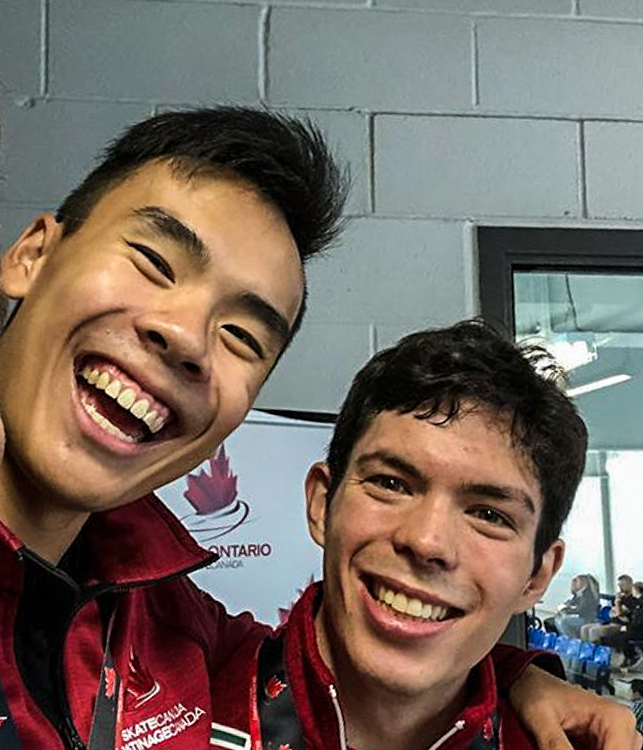 Back to Vaughan Mills, where there are no mountain paths or lakes, or streams. Or bears.

Nguyen wanted to go look at shoes. “What are you doing, buddy?” Messing said. He glanced down at a shiny pair. “These shoes? I don’t get it. They are not practical. I don’t understand.” (Take a close look at the shoes Messing wore for his wedding in my previous story.)

“I’m trying to teach him how to shop for NOT-camping gear,” Nguyen said. “Like for regular people.”

“But this guy is such a baby. He went to Legoland,” Nguyen said. “This guy is just eyeballing this thing, this Stars Wars kit. I don’t follow Star Wars. But he clearly is a big fan of it.”

It was expensive. Messing wanted to split the cost with Nguyen. “I thought he was joking, but he was dead serious,” Nguyen said. “I was like, kiddo, are you crazy? You are out of your mind!” Nguyen talked him down off that cliff.

Then they went to a clothing store. Nguyen said he made Messing try on “really cool clothing.”

“Look at him,” Nguyen said. “He’s so handsome. He looks like a regular human being. He doesn’t look like a creep!”

Messing wanted to veer off to an outdoors store. “[Nguyen] is like: ‘I feel so uncomfortable,’” Messing said. “’I don’t know anything. ‘I was like: ‘Look at this model. This rain jacket has this factor and this factor that will keep you warm.”

Not for Nguyen. “I try to make him less of an Alaskan,” Nguyen said. “There’s nothing wrong with that, but I think if you are in Toronto, you should not look like a hunter. I think he should look a little bit like, with the crowd that’s around us.”

They arrived at the Summer Skate with two appropriate black costumes. There are no boundaries with them. “There is no line of distraction,” Nguyen said. “Before yesterday and today’s programs, we were throwing balls and hitting the lights and causing a mess.”

Messing skated the free program just before Nguyen, and they passed each other on the ice. Nguyen was going for a high-five with his sidekick, but then Messing looked at him, with his fist up. “Oh, rock-paper-scissors,” Nguyen thought. It was something new they had adopted at this trip. Nguyen quickly obliged.

Messing won it, for the first time. “Maybe that’s why I didn’t skate too well,” Nguyen said.

“This is the first time I won, so that’s why I got really happy,” Messing said. “He was kicking my butt today.”

There are so many things and inside jokes between these unlikely cronies.

“There’s nothing bad I can say, even if I wanted to,” Nguyen said. “Like I could just go on and on about how great this guy is.”

Friends indeed. They are scheduled for no competitions together this year, other than national-related events or maybe Four Continents. Only one Canadian man gets to go to the world championships this year in Montreal. They will be up against each other for that one spot. But to be sure, they will be applauding each other, like best chums would.