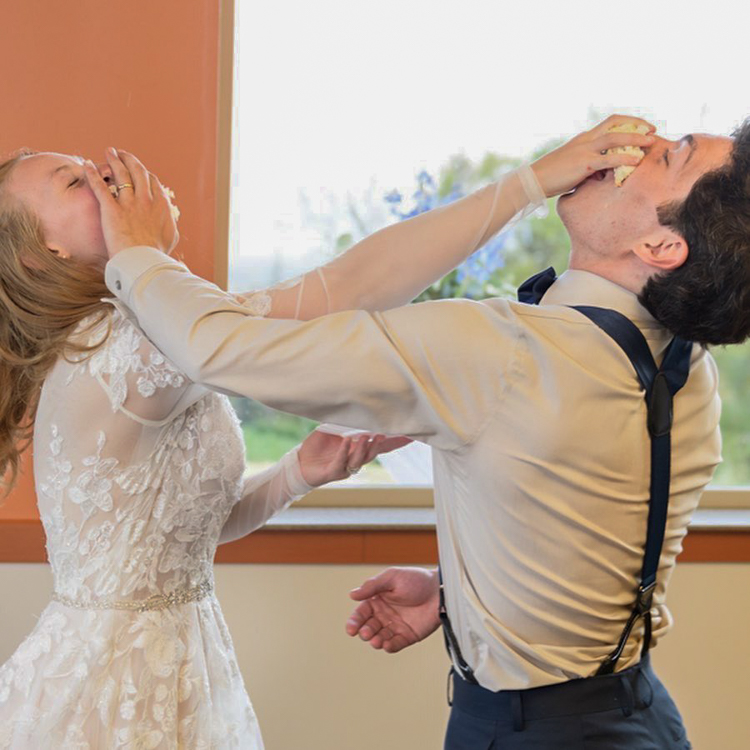 The 27-year-old Alaskan took a giant life step on Aug. 3 when he married Lane Hodson in a Messing-like ceremony in Anchorage, Alaska. And his programs this year reflect his joy and the change in him.

Did we see Ed Sheeran’s “Perfect” coming? Of course! The words all make sense:

“I found a love for me

Well I found a girl beautiful and sweet

I never knew you were the someone waiting for me

‘Cause we were just kids when we fell in love

Not knowing what it was

I will not give you up this time.

But darling, just kiss me slow, you heart is all I own

And in your eyes, you’re holding mine.”

The loveliness of the song goes on. Perfect for this hiking, canoeing, camping twosome. And looking at them, believe every word of it. And it’s his short program this year. And it was also the music for their first dance at their wedding. Every word is a tribute to where Messing is in his life right now.

“It’s been one of the busiest summers I’ve ever had,” Messing said at the North York Summer Skate, where he debuted both programs. “It’s mainly been just wedding planning. They take a lot to plan. A lot more than I ever thought. I thought it was about just getting this and that and you’re done. What do you mean you have to put the food on something? The caterers don’t bring that? You need plates to put food on? You need something to eat with? I guess you need something to put drinks in. And people need chairs?

“I got to a point the week before the wedding, I just started closing my eyes and just handing her [Lane] the card. I didn’t want to know any more.”

Messing figures his fiancé organized 85 per cent of the wedding, because he just happened to be in peak early season training, with all the difficult strength exercises. “It was very difficult to do while planning a wedding,” he said. “I would get home and she’d go: “Okay, let’s talk about seating charts.’

“But I couldn’t even think about anything. I was so tired and hungry. Just getting your mind back to a thinking state was so hard. I felt bad about dropping the ball.”

Messing’s father, Bob, a fireman, officiated at the wedding. “He just went online and did a practice test, and it said: ‘You are registered,’” Messing said. “And he was like: ‘Uh, okay. Thank you.’”

“He did an amazing job,” Messing said. “Especially with a week and a half notice. We were looking at hiring someone, but we didn’t want someone we didn’t know to do it. “ 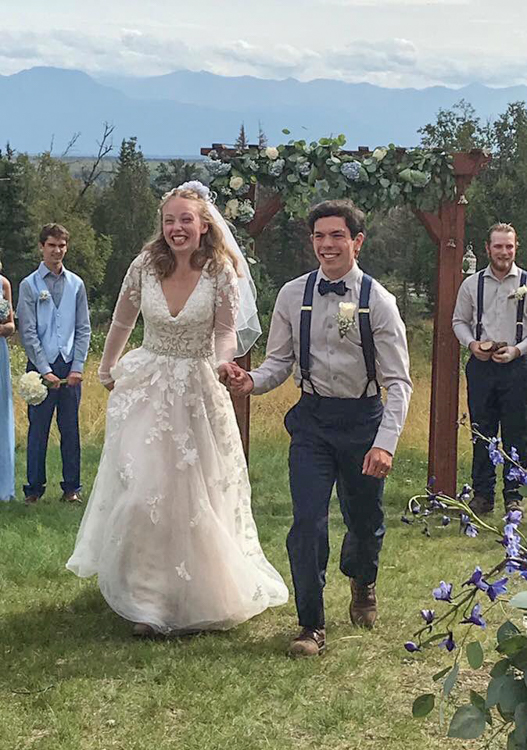 What Messing did do was cut the music for their first dance, using his skating skills for the wedding. For this, he turned to the “Perfect Duet” performed by Ed Sheeran and Beyonce. The exchange of voices and genders worked perfectly: part of the way through, Beyonce sings: “Well, I found a boy.” It was a 4 ½ minute song, but Messing cut it down to 3 ½ minutes.

So how to dance to this? He and Lane had never done a slow-dance together before. When they go out, they listen to fun bands. And they swing dance. “I swing her around, we have fun and we dance to the upbeat music,” he said.

But when they started dancing at the wedding, all fell magically into place. “Everything just kind of lined up,” he said. “I was able to spin her around and we were able to do how we normally dance, just slow it down. And it was just so perfect.” Of course.

Just as Lane came into the hold position for the dance, she spotted a 4-year-old nephew peeing in the bushes. “I turned around, and sure enough, there was a little baby butt in the woods, and he’s peeing into the forest,” Messing said. “Because it’s what we do.”

At the end, the guests tossed all of Messing’s stuffed animals thrown to him at skating competitions at the newlyweds. Messing had sent one of his old skate blades, specifically one he had used in his first Grand Prix, to his brother to have it fashioned into a knife to cut the cake. “I’m hoping to use it for years to come, honestly, like cut my apples with it,” he said.

“The wedding was fantastic,” Messing said. “It was better than either of us could ever have hoped for. We’re calling it the HodMess wedding. Because her name was Hodson and mine is Messing. And so it was a hot mess of a wedding. Because we thought just like nothing is going to go right. We don’t even know what’s happening any more.

They had a schedule. Sort of. “All the times on our schedule had ‘ish’ next to it,” Messing said. “Like tenish, eleven-thirtyish. And that’s really how it all happened. You just go with the flow of things. “

Both are happy beyond happiness. “Seeing her walk down the aisle was like…yeah,” Messing said. “I didn’t realize I was going to cry like a little baby. I cried. I’ve never seen her smile that big for that long.

“I almost cried when I got named to the [2018] Olympic team, but I bit my lip super hard and I didn’t cry.” Messing said. “But there was no stopping this. This was something special.”

They had no time for a honeymoon. It was tough enough to schedule a wedding in their lives. Three days after the wedding, Messing performed the Ed Sheeran short program in an arena, with a couple of coaches who knew it had also been the music for their first dance. “It feels so right,” Messing said. “Everything about the program feels so right about the way it works. And the way it goes, my mind is not really on my skating when I do it. It’s honestly on memories of how we danced and how happy I am with how my life is right now.

“I know it sounds really cheesy, but this was the first time I ever did not feel alone on the ice,” Messing said.

He ends the program with his hands on his heart.

The free program is to one of his favourite songs. Choreographer Lance Vipond just happened to stumble on it and suggested it to Messing, not knowing the song’s history with the skater. There were no arguments. “Oh it would be awesome!” Messing said. “I love this song.”

But when he started to listen to it, he began to wonder it if could work because “it’s so different from anything I’ve ever tried to skate to before.”

The music doesn’t sound like hard rock in the beginning: it’s slow, instrumental, but it builds. The beginning section has a long piece to music that calls for long, flowing lines, and then Axl Rose begins to sing. And when it does, the music builds. Back to instrumental for footwork near the end, and then it explodes into hard rock with guitar. The program ends with back-to-back spins, something else Messing, a very talented spinner, hasn’t done before.

For now, Messing is on pins and needles about getting the feel of “November Rain” across. “I feel like that’s going to be one of my biggest nerves out there is that half-way point through the program where I do take a little rest and get decently self-conscious out there with myself,” he said. “I’m not doing what I’m comfortable with. And I really want to see the video footage to hopefully grow in more confidence so that I can express myself through a different style.”

It’s what growth is. Yes, it will be a different Keegan Messing.

He can’t wait to see how these programs evolve, and how people will react. He will compete at the U.S. International Classic, Skate America and Cup of China. And hopefully the Grand Prix Final in Turin. Last year, he was the first alternate to the Grand Prix Final, but got in late in the game when Yuzuru Hanyu had to cancel.

And he’s bursting to deliver that new short program. “I really feel like the short program will make people cry,” he said. “Honestly.

“If people really understand the meaning behind it, I think it will even make me cry.”