You are here: Home / Blog / Gilles and Poirier: on a Quest for the Sun
Tweet
0 Shares

“Now they only block the sun.

They rain and snow on everyone.

So many things I would have done,

But clouds got in my way.”

Indeed. Piper Gilles and Paul Poirier will skate to these Joni Mitchell words next week at the world figure skating championships in Stockholm, Sweden. No doubt, for them in the season of a pandemic, art has become life.

From the brighter side of the clouds during last season, Gilles and Poirier polished up their resumes and made them shine like never before. They won a gold medal at Skate Canada International defeating Madison Hubbell and Zachary Donohue, who were world silver medalists in 2018 and bronze medalists in 2019.

At Rostelcom Cup, the Canadians finished second to world silver medalists Viktoria Sinitsina and Nikita Katsalapov, qualifying themselves for the Grand Prix Final for the first time in five years.

They finished off their season with a silver medal at Four Continents Championships, finishing three points behind Americans Madison Chock and Evan Bates, and ahead of Hubbell and Donohue. Their score of 210.18 was their international best, their benchmark now.

Their “Both Sides Now” free dance was to have enchanted Canadian audiences at the world championships in Montreal, but was cancelled, just as the first wave of the COVID-19 pandemic arrived. Since then, Gilles and Poirier have been struggling to find sunshine in a parade of dark clouds.

When they compete at the world championships in Stockholm, Sweden next week, it will be their first competition in 14 months.

“We were really disappointed and bummed out that we couldn’t compete [at the world championships in Montreal],” Poirier said. “The cancellation of the worlds was also happening at the same time as the first wave of the pandemic was really revving up. And that was something that was affecting everyone. The disappointment of losing worlds combined with going from normal life to full lockdown at home, it’s hard to separate those things necessarily. It wasn’t just the cancellation of worlds. It was essentially everything in our lives went on pause. Our training went on pause. Just to go out and see people, our friends and family, stopped as well.”

While all of this was going on, Poirier buried himself in his studies. Gilles began to read books. She bought a road bike, and rode it. “I loved it as a kid, but I hadn’t really picked it up as an adult,” she said. “It kind of gave me a little bit of freedom and it helped me stay fit as well. It helped me get away from life a little bit. Also, I wasn’t a big reader and now I’ve continued reading as an adult. I’ve really enjoyed almost challenging myself, because I always found reading to be taxing and now I enjoy it.”

When they could, they diligently prepared for competitions that continued to be cancelled. After the cancellation of Skate Canada International in late October, the team was all at sixes and sevens. “We really struggled with investing ourselves 100 per cent into competition, because we just had this fear that everything would get cancelled at the last minute,” Poirier said.

They continued to train, but wondered if their time would be better spent just giving up on 2020-2021, and focusing on the important 2022 Olympic season instead. Then the national championship was cancelled. No chance to repeat their Canadian title from the year before. By the end of January, their training had become lacklustre. They reached a crossroads.

They sat down and after a little chat among themselves, decided that they had to put themselves in the mindset that the world championships in Stockholm were going to happen. Forget the uncertainty. In their minds, it was to be a reality.

They’ve had this mindset the past month and a half. They knew there was always the odd chance something could derail their plans, but they needed to train at their best.

Their goal last season was to finish on the podium at the world championships in Montreal. They’ve feel they’ve done the training necessary to do just that this time, too.

While they have had no international competitions for feedback, they had Canadian judges at home take a look at their routines to make sure they are on the right track. “We’ve had lots of people view our programs and give us little pointers to focus on, just dotting all our Is and crossing all out Ts before we get to worlds and leaving no points on the table,” Poirier said.

Fortunately for them, they are using both programs from last season, when they had plenty of feedback. Based on that, they made many changes to the programs before the Montreal world championships. They changed about a third of their free dance before Montreal, with the end being quite new. It was seen on video at Skate Canada Challenge, an event they won by 16.42 points. Both Sides Now II has never been done in front of an audience.

“We know that the vehicles are strong and that they work and there are no big structural issues to the program,” Poirier said. “I think the challenge this season has really been to keep the programs fresh so that we’re emotionally invested in what we’re doing and that the story is believable. “

All along, the prospect of the 2022 Olympics in Beijing has kept their heads up, and kept them motivated. But every day of the past year has required mental strength. “I think a lot of athletes feel we are in this weird situation where every day, it could change,” Gilles said. “You are almost preparing yourself for the worst, but trying to look forward. We know that the Olympic Games is coming up, so having that long-time goal helps us come in and train.”

An uncertainty looms about everything they do. This is something they must manage. “In some ways, the easiest part is to just show up and skate,” Poirier said.

The upcoming world championships are an enigma. It will be difficult to know what the event will feel like or look like, or whether anyone has an advantage or disadvantage. Nobody knows what restrictions anyone has trained under. 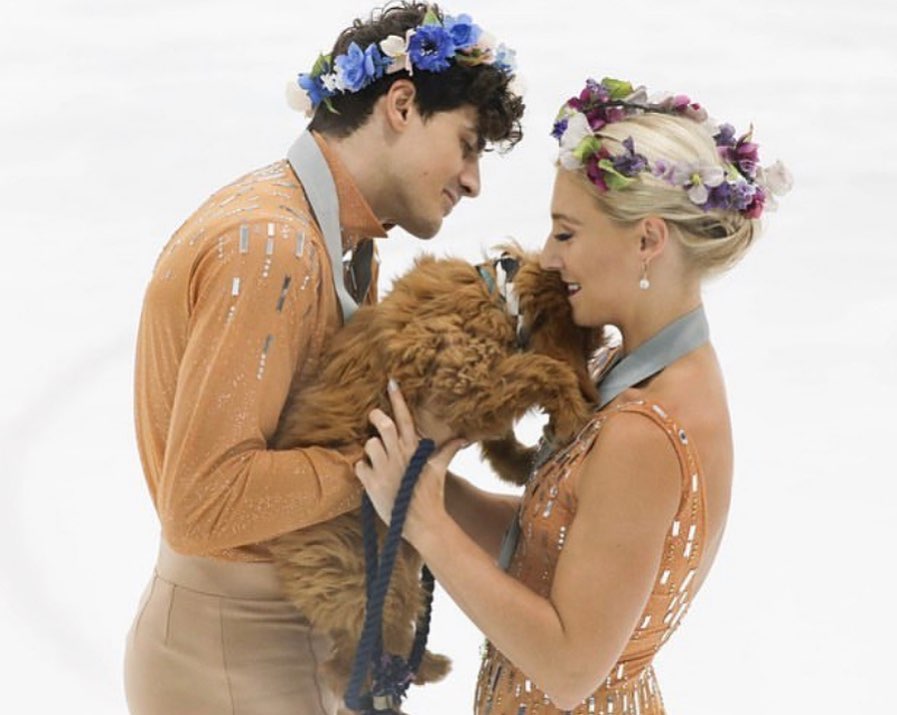 As Joni would say:

I’ve looked at life from both sides now

From win and lose and still somehow

I really don’t know life at all.”