You are here: Home / Blog / Gilles and Poirier: At Last
Tweet
0 Shares 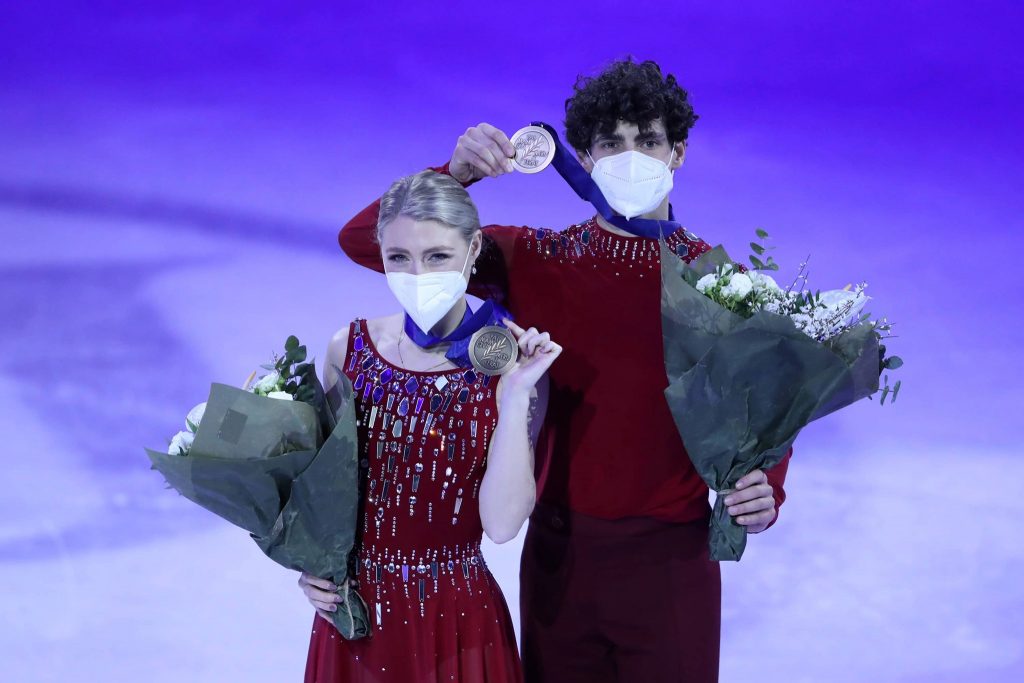 Sweet dreams are made of these.

In ice dancing on Saturday, it was everything that led up to the bronze medal – only .36 points away from a silver – won by Piper Gilles and Paul Poirier at the world figure skating championships. Although they won the bronze medal, they finished second in the free dance.

“It took me 12 years, but here we are!” Poirier said on twitter.

Viktoria Sinitsina and Nikita Katsalapov of Russia won the gold medal, as Russia almost made a sweep of medals, with Russians winning gold in the pairs (Russians were first and third) and also taking all spots of the podium in the women’s event. Russians finished fifth and eighth in the men’s event.

But it was easier for them than many others. Some Russians had as many as 10 competitions during this pandemic season. Other than Keegan Messing, Canadian skaters had no competitions at all for the past year, just a virtual one in which they pulled up their energy like socks and emoted away in front of a camera.

The Americans have managed two major events, Skate America, and U.S. nationals. Nobody even knows who the Canadian champions are right now. Canada doesn’t have 2021 champions, only 2020 champions.

Gilles and Poirier hardly knew what they were in for, felt it hard to train this season, had to buck themselves up to get in the mode a couple of months ago. And what they brought to Stockholm with them were their poignant routines, calling up Joni Mitchell to work her magic as they tried to work theirs.

Their free dance,, to Mitchell’s “Both Sides Now,” must be considered a classic now, their signature piece. And who thought they could ever top their free dance from the previous year to “Vincent?”

“Vincent” opened the door. “Both Sides Now” has allowed them to step through it. When the marks came up – a whopping 130.98 points for the free and 214.35 overall – the inner flutters began. Tears came.

Gilles and Poirier’s previous high international marks were 126.26 for the free at the Four Continents championship and 210.18 for a final mark.

Poirier said he was at a loss for words. Stockholm was their eighth world championship together and they’ve hovered between sixth and eighth place for a long time. “Essentially since 2014,” Poirier said. “Just the pent-up frustration of so many years, and being able to accomplish this feels like such a nice release, and once we’ve had time to process it as well…I think it will feel more real.”

It will become real when they go home, he said, and see the coaches that did not come with them: Carol and Jon Lane and their family and friends. Coach Juris Razguliaevs accompanied them to Sweden. Between them, they dream up the magic and create these vehicles.

“What we were able to accomplish today is the product of so many people’s efforts and we want to be able to celebrate them with them,” Poirier said.

Gilles and Poirier skated before most of the heavyweights, with only Alexandra Stepanova and Ivan Bukin before them. These Russians scored 125.75 for the free, 208.77 in total. The Canadians were safely ahead of them. But the rest?

Madison Chock and Evan Bates, two-time U.S. champions, had already climbed the ladders Gilles and Poirier couldn’t climb, especially when they moved to the Ice Academy of Montreal, run by Marie-France Dubreuil and Patrice Lauzon. Under their influence, Chock and Bates blossomed.

They won silver and bronze medals at the world championships in 2015 and 2016.

When they finished, Chock was beaming. “She looked at me and I was like: ‘I didn’t skate as well as you did, babe,’” Bates told her.

“There were certainly a few seconds in the program where I made some technical errors that were obviously costly, and honestly I’m quite disappointed about it.”

Their faces fell when they saw the marks: 127.54 for the free, 212.69 for the total. Scores that obviously set them behind the Canadians. With two skaters left to go, they knew they wouldn’t be on the podium.

“But this is kind of what we love about the sport,” Bates said. “If it was a guaranteed thing every time that we could just show up and win the gold medal, then it would be very easy and fun. But the real pleasure I think comes from working really hard, getting knocked down and coming back stronger. We’ve been through a lot of those moments and I think this is one moment in particular that is quite disappointing for us, but we’re certainly going to come back next season stronger and with the same goals in mind.”

The reigning U.S. champions, Madison Hubbell and Zachary Donohue brought their best material to the table, a beautiful rendition of Leonard Cohen’s “Hallelujah,” sung by K.D. Lang. And oops they got a level two on their circular step sequence with some rocky steps.

When those marks came up, Gilles and Poirier had the measure of Hubbell and Donohue by 1.12 points in the free dance. But then the Americans finished ahead of them overall by only .36 points.

Ironically, Donohue used to skate with Gilles years ago. As members of the U.S. team, they won gold in Junior Grand Prix events, won the junior national dance title in 2010, just before their partnership dissolved. Gilles teamed up with Poirier in 2011 and got her Canadian citizenship on Dec. 17, 2013, the idea being they’d get it before the Sochi Olympics. But they didn’t make that team.

“We’re feeling a strange mixture of emotions right now,” said Hubbell. “There is relief that this competition is over and proud of how we handled this week and the stress of international competition after a year.”

But, she admits, there is also a bit of dissatisfaction that they did not win gold – they were 6.46 points away from that. “Right now, I’m a little numb,” she said. “In a few minutes, I’m sure I will be bouncing off the walls excited.”

This event could have served as their chance to win the world title, because absent were the reigning champions Gabriella Papadakis and Guillaume Cizeron of France, generally considered unbeatable. With all of the uncertainties of the current season, the French decided to use their time to prepare for the Olympic Games.

However, the Russian team that won on Saturday had already defeated the French in what proved to be their final competition last season, the 2020 European championship. They had finished behind the French by only .05 points in the rhythm dance, and then they won the free dance, taking the title by .14 points.  Papadakis and Cizeron hadn’t been defeated since the 2018 Olympics when Canadian Tessa Virtue and Scott Moir edged past them. And they won a couple of world titles before Virtue and Moir came back.

The Russians, skating not to their routine of last year, but one from the previous year: “Songs my Mother Taught Me,” won with decisive numbers, with the blessing of judges from Canada, Switzerland, China (judge Fend Huang was suspended for a year for showing national bias during the pair event at the 2018 Olympics, but he is back), United States, Spain, Russia, Lithuania, Britain and France.

The Russians were 2.04 points ahead of second-place Gilles and Poirier in the free dance, and ahead of Hubbell and Donohue by 4.36 points overall.

Sinitsina and Katsalapov had never won a world title before. They teamed up in 2014, and ran into lots of problems, either injuries, or mistakes in events. Twizzles were Katsalapov’s Achilles. In their free dance on Saturday, the twizzles turned without a hitch and they got level fours.

“I don’t know what to say right now,” Sinitsina said afterward. “I just want to smile and cry. This is a very unique world championship and the emotions are overwhelming. I had my eyes wet before the performance and they are still wet after. I am really grateful to Nikita for his huge support.”

Katsalapov said he left all of his emotions on the ice. “I’m totally empty and it’s really amazing,” he said. “If I had the emotions, I would still be screaming. “

He said winning the European championships last year gave them a boost, but success in the future wasn’t a given. “It is not like we fly to the heaven and cannot come down,” he said. “We start to work twice as hard, because we know we can do even better.”

Now they have. They have hit their target.