These days, with the Olympics looming, Tessa Virtue and Scott Moir prepare by attending team seminars. And there they see their own accomplishments from the past: their youthful gold medal at the Vancouver Olympics and their silver medal from the Sochi Games.
“We see pictures of old Tessa and Scott,” Moir said. “We see the 2010 version, which are two kids we barely know.” 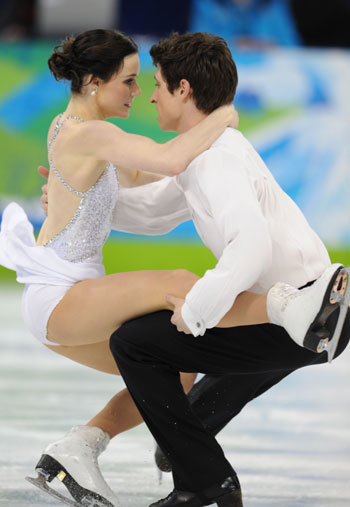 They were the youngest Olympic dance champions when they won in Vancouver, she being 20, he 22. They were the first dancers to score a component score of 10.0 (at the 2009 Skate Canada International). First, first, first. We could go on.
Medals and victories aside, Virtue and Moir haven’t stopped pushing their own limits since that Olympic win (which by the way was their Olympic debut.) Cases in point: their two programs this season. Latin is the prescribed rhythm for the short dance this season, but they’ve been there, done that. In both of their routines this year, they felt their routines had to be special. They had to stand out. As Moir says, “It’s very likely…our last kick at the can.”
They wracked their brains at how to differentiate themselves. “It’s daunting, making music choices for the season,” Moir said. “We wanted to have programs we really connected with. We want to go out and have a blast. It’s really not much more complicated than that. We love to skate. We love to skate with each other. And we’re showing that with three pretty iconic pieces of rock music with a Latin twist, which also is kind of super cool.”
Who could imagine skating Latin rhythms to the Rolling Stones, the Eagles and Carlos Santana? It came from the mind of Marie-France Dubreuil, just to throw a little twist into the genre. Besides, Dubreuil is a genius at translating Latin movement onto the ice. “It’s not just about wearing skates and doing what you do on the ballroom floor,” Virtue said. “It’s really connecting it to edge work and making it just glide and use your body in the way that connects down onto the floor is really complimentary to what we do on the ice.
“We’ve never worked with anyone who was able to do that.”

Dubreuil’s partner in life and on the ice, Patrice Lauzon is also a wizard with technique. It helps that Moir has always been a huge classic rock fan. It’s a dream come true for him to mix it up with these artists.

Dubrueil and Lauzon doing Latin in 2006.

Virtue and Moir had once considered skating to the Eagles for an exhibition performance. They never dreamed “Hotel California” could become part of a competitive program. But here it is, in all of its 1976 glory.
“We’re both kind of old souls,” Virtue said. “Especially when it comes to music. It’s not all that surprising that we connect to music from that generation.”
“They’re pretty epic songs,” Moir said. “Yes, they’re before our time, but obviously they’ve withstood the test of time. They are still kind of the best music. That’s the generation that we connect to the most. I think what’s funny is that some of the younger teams we skate with probably think we were around when those songs were out, because they think we’re dinosaurs. We let them think that we have that much experience.”

That being said, Virtue and Moir have a special place in their hearts for last year’s short dance to Prince. “Prince is very close to our hearts,” Moir said. “We love to skate to it. It was a special program. I don’t think we’ve said by to that Prince program for sure. It will poke its head up once in a while.” 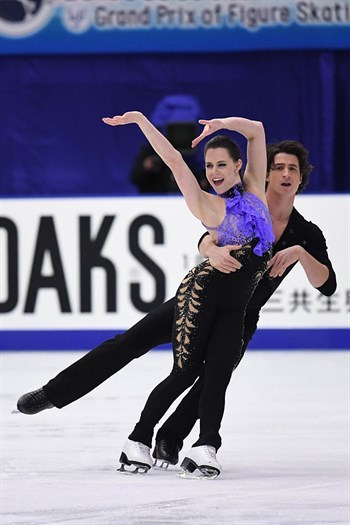 Prince
Still, it’s very hard to compare anything to what they’ve done in the past to what they are doing this year. They press on, always. They are still spending time working on technique, to change their patterns of movement. There is no standing still. “There is so much in the way we prepare that is so different,” Moir said. “”That’s what makes it so special. We had no interest in coming back and doing the same thing.”
Strangely enough, even though they have been Olympic champions and silver medalists and world champions, Virtue and Moir have never prepared for a season the way they do in Montreal, backed by their everything-but-on-the ice team, B2Ten.They mention them at every turn. They are now subscribed to a very sophisticated approach to elite training. “It’s going to pay dividends,” Moir said.
They’ve already had one outing, at Autumn Classic and “I’m glad it doesn’t feel like it did last year,” Moir admitted. “To be honest, the first time out is always nerve-wracking. It doesn’t matter if you are in your 20th year together, or your first, you’ve got to break that ice.”
He and Virtue were nervous for the short program at Autumn Classic a month ago. However, last year, their first start back after a two-year sabbatical was heart-stopping. “I don’t think I’ve ever felt like that, and that includes the Olympic Games,” Moir said. “There was a lot of pressure. I wasn’t quite sure how to handle it. I kidded myself that it was just going to be like another snow. And it absolutely wasn’t.”
This year, however, they understand a little more how to control the nerves in a competitive environment. It’s why they did a two-year plan to return. “Hopefully we can ride some of that momentum from last year while picking up that little bit of experience on the way,” Moir said.
The most difficult part of their first event was NOT to see it through an outsider’s eyes. Those eyes expect to see a continuation of the level at which they skated at the world championships last March in Helsinki, where they won the gold medal – and the programs had been developed and nuanced and prepared.  “We really had to wrap our heads around that,” Virtue said. “There was some pressure to create magic and to give people what they expect to see.”
In other words, the public wanted to see their Olympic program at its Olympic level of development.  Instead, the team had to focus inwards and realize how it fit into their Olympic season and what could they learn from it. Note: their performance at Autumn Classic last year didn’t come close to their performance, even at their next event, Skate Canada. It grew. A lot.
At Autumn Classic a month ago, their free dance to Moulin Rouge had been so prepared, their expectations of performance were high. And while it was a strong first outing, it wasn’t what they had envisioned. It wasn’t quite what they had been training at home. They still have to learn how to compete the program. They have already injected more power and speed into the performance we’ll see in Regina.

Even though they’ve been together for 20 years, they’ve never competed in Regina, although they have done Stars On Ice tours there. Regina is also the headquarters for Hillberg & Berk, a jewelry company that Virtue has aligned herself with. Some of her designs with them are just launching. She’ll be able to check out their new offices and see her new pieces of jewelry in stores.
Their first Skate Canada was in Victoria, B.C. in 2006. It was special because they competed against Marie-France Dubeuil and Patrice Lauzon and shared a podium with them, although the people who would become their coaches, defeated them.

“We just looked up to them so much,” Moir said. “They always looked out for us and were mentors to us. That really stands out to us to be on a podium with them at such a young age, was a pleasure. It really was a great start to our senior Grand Prix days. “
Dubreuil and Lauzon are still taking them by the hand. But mostly, Virtue and Moir never tire of skating. Not a little bit. Moir expected the fun to wear off after a while. It hasn’t. And that’s what will drive them to Pyeongchang.