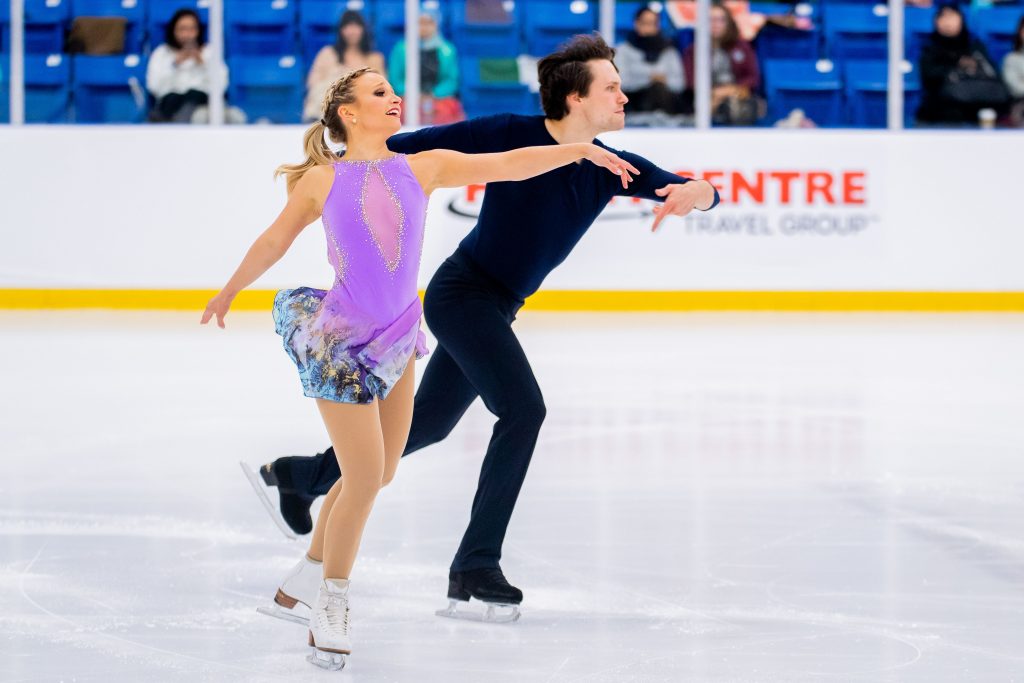 For two-time Canadian pair champions Kirsten Moore-Towers and Michael Marinaro, it was tricky this season: should they make the attempt to get new programs, even though there was a chance they would be seldom seen? And should they stray onto sacred ground and use music from other skaters they revered?

The answers were yes and yes.

The wider world saw their decisions laid bare at the Skate Canada Challenge – qualifying event to the Canadian championships next month – over the past two days. And they were winning routines, although perhaps not as glorious as they want them to be.

Because of COVID, they were forced to make these decisions on the socially distanced Zoom or some other internet gathering service. Some skaters had kept their routines from last season. Others had changed one of them.

“It came down to [the fact that for] Mike and I, the creation is our favourite part of skating,” Moore-Towers said on a conference call. “The few weeks we spend with Julie [Marcotte] creating shapes and different movement and making a story and living it though our skating has evolved into our favourite part of skating. Because of that, we weren’t thinking to give up a year of being able to get that back.”

But it was particularly tough to settle on “The Blower’s Daughter,” by Irish folk singer Damien Rice. It was a song featured in the 2004 movie “Closer,” starring Julia Roberts and Natalie Portman and Jude Law. The movie is a love tragedy, just perfect for beautiful shapes and interpretation.

But it was the music used to wondrous effect by three-time Canadian pair champions Jessica Dube and Bryce Davison, so good they used it not only for the 2006-2007 season but also the following one, too, when its poignant feels led to them winning a world bronze medal.

“Mike and I were at impressionable ages when they did that performance,” Moore-Towers said. “And we loved it. We were such huge fans of them. Because of that, we weren’t sure we wanted to use that piece of music. It was sort of untouchable. You should sort of leave it done.”

But they listened, and the music in all of its beautiful painful softness was like a magnet. They couldn’t help themselves. They reasoned the whole thing could be so different because Dube and Davison couldn’t use lyrics at the time, and Moore-Towers and Marinaro can. “So we felt we could put our own spin on it, and do it a little differently and maybe it would be more of a flatter idea – that we liked theirs so much, we wanted to put our own spin on it. We’re hoping we’ve done that. We hope that people will enjoy it the second time around.”

Mind, Dube and Davison did that routine 12-13 years ago. Best to call it up to remember. And you find that it has the same effect that it did then: moving, every minute of it. Theirs was a routine with a lot of power. But music guru Hugo Chouinard and partner Karl Hugo composed part of the routine to make it “a 100 per cent unique” creation for Moore-Towers and Marinaro. So now it is their own.

Parts that were weaved into the original piece are from 2:00 to 2:30 on the video used for Challenge, as well as the soft introduction of a woman’s voice between 3:43 and 4:13. So expertly purled together, who could tell? Such is the magic of Chouinard/Hugo.

At Challenge, Moore-Towers and Marinaro won the free skate with 135.18 points, well ahead of second-placed Lori-Ann Matte and Thierry Ferland, at 113.39, and a throw triple Lutz in the mix. Best not to forget that last year’s national silver medalists Evelyn Walsh and Trennt Michaud missed the Challenge event because Walsh sprained an ankle during training, and they were unable to get a video together by the deadline.

Third were future stars Brooke McIntosh, only 16 and her new partner Benjamin Mimar, 20. Despite they fact they are new together, and training through the restrictions of a pandemic, they were a sniff behind Matte and Ferland with 111.51 points. And they unleashed a HUGE triple twist (level 2), all before getting level fours for all three lifts. They landed both of their throws with positive GOE and looked the part of skating to Robbie Williams’ “Your Song” which never gets old.

Deanna Stellato, at age 37 (and 21 years old than McIntosh), and Maxime Deschamps, 29, unleashed a powerful routine with extremely difficult lifts (all three of them rated level four), lost ground after being second in the short program – because they suffered two falls in the free, both on their throws. They were fourth in the free skate but held onto third place overall over McIntosh and Mimar by 3.96 points.

Moore-Towers and Marinaro grabbed the overall lead by the throat, winning with a total of 206.22 points, 33.80 points ahead of all the rest. No contest.

But don’t expect to see a repeat performance next month at nationals: Moore-Towers and Marinaro skated the video four weeks ago, and have since changed about 40 per cent of the routine. Marinaro hopes for 15 to 20 more points next time out.

Moore-Towers and Marinaro also easily won the short program and therein lie another test for themselves, pushing themselves in directions they had not gone before. They skated to “Gimme All Your Love,” a blues rock performed by Alabama Shakes, headed up by Brittany Howard, in an unusual piece with changes of tempo,  a song that bounces back and forth from strong aggressive beats to quiet spots.

“It’s different for us,” Moore-Towers said. “We’re always trying to expand our horizons and push the limits of what we’re capable of, because we do feel we are still growing and it’s tough.

“It’s not a style we’re used to. It’s still evolving and changing as we train it each day. It’s a little bit more rock and sultry, a little sexier than we normally do. We like it a lot. It’s super fun to train.”

Audrey Carle, 14, a novice women’s singles skater last year and Gabriel Farand, 19, who had been a pre-novice men’s single champion in 2014 and a silver medalist the next year at the novice level – teamed up to win the junior pair event at Challenge. They train alongside Moore-Towers and Marinaro in Oakville, Ont.

It was a scramble for the top four teams who finished within five points of each other. Carle and Farand won with 130.45 points, although they finished third in the free with a just a few too many mistakes. They skated to “Goodbye Yellow Brick Road, and did attempt a throw triple Salchow that was deemed underrotated. They won the short program with a program that showed off their beautiful lines and expressiveness.

Kelly Ann Laurin and Loucas Ethier finished second overall, after placing 2nd in the short, and fourth in the long (they fell out of a difficult back outside death spiral).

Meghan Fredette and William St.-Louis, who towers above the rest of the skating world at 6-foot-6, finished third overall, while being third in the short program and winning the free. They are a new team this year.

Fourth were Emy Carignan, only 14, and Bryan Pierro, 20, after being fourth in the short program and second in the free.

Behind all of this scrambling was Patricia Andrew, 15, and Steven Adcock, 25, who delivered amazing, soaring triple twists despite the fact that they are a new team this season.

Only two men attempted triple Axels in the junior men’s short program. One of them, Rio Morita from the Tracy Wilson-David Wilson and Ernest Pryhitka stable, landed it on two feet. The other, Wesley Chiu also lost GOE points on his.

Morita, 16, landed an easy triple Luz, a triple flip-triple toe loop and got the elusive level four for his step sequence for 63.59 points.

Chiu, 15, who has been landing quads in practice for coaches Keegan and Eileen Murphy in British Columbia, exhaled when he finished, disappointed that he had flipped out of his triple flip and doubled a Lutz. He ended up fifth with 57.47 points. But Chiu has climbed out of the nether spots before.

The elegant Shohei Law, 15, was second with 61.62 points, with a triple Lutz and a triple loop- double toe loop and level fours for his steps and both of his spins.

Ravi Walia’s red-headed charge Matthew Newnham, 17, is in third place with 60.50 points and with his coat tails flying, got level fours for all of his elements, too, skating to “One Day More.” He was fifth last year in junior men at nationals.

Fourth was ball-of-fire Brendon Wong, a 14-year-old that skated to “Terracotta Warriors,” a very drum-centred piece of music. He ended up with 57.59 points.

The very promising Alec Guinzbourg, 16, now with Lee Barkell at the Granite Club in Toronto, finished sixth with an uncharacteristic mistake, stepping and turning between this triple flip combination. Skating to “Human” by Rag’N’Bone Man, he has 57.32 points. He was the junior bronze medalist last year and has had a lot of experience on the Junior Grand Prix.