You are here: Home / Uncategorized / Tepin: Queen of all she surveys
Tweet
0 Shares

Hello boys and girls. I’ve had a lovely vacation over the summer, and now will return with a horse racing story to take the rust off my writing mind. Have no fear, there will soon by lots of figure skating stories to come. But for now, we’ll have a little fun with a female racehorse that is becoming unbeatable. All photos below are mine.
With every race, with every rush to the line, the legend of Tepin, a 5-year-old mare with a coat the colour of deep oiled bronze, is growing apace.
On Saturday at Woodbine Racetrack in Toronto, breaking from the outside post eight, Tepin won her eighth consecutive race, the $1-million Woodbine Mile. Never mind that she hadn’t raced in three months. Never mind that she was the only mare in a field of powerful males. Tepin ran like Tepin does. She’s the tops. She’s the queen. And she knows it. She keeps proving it. 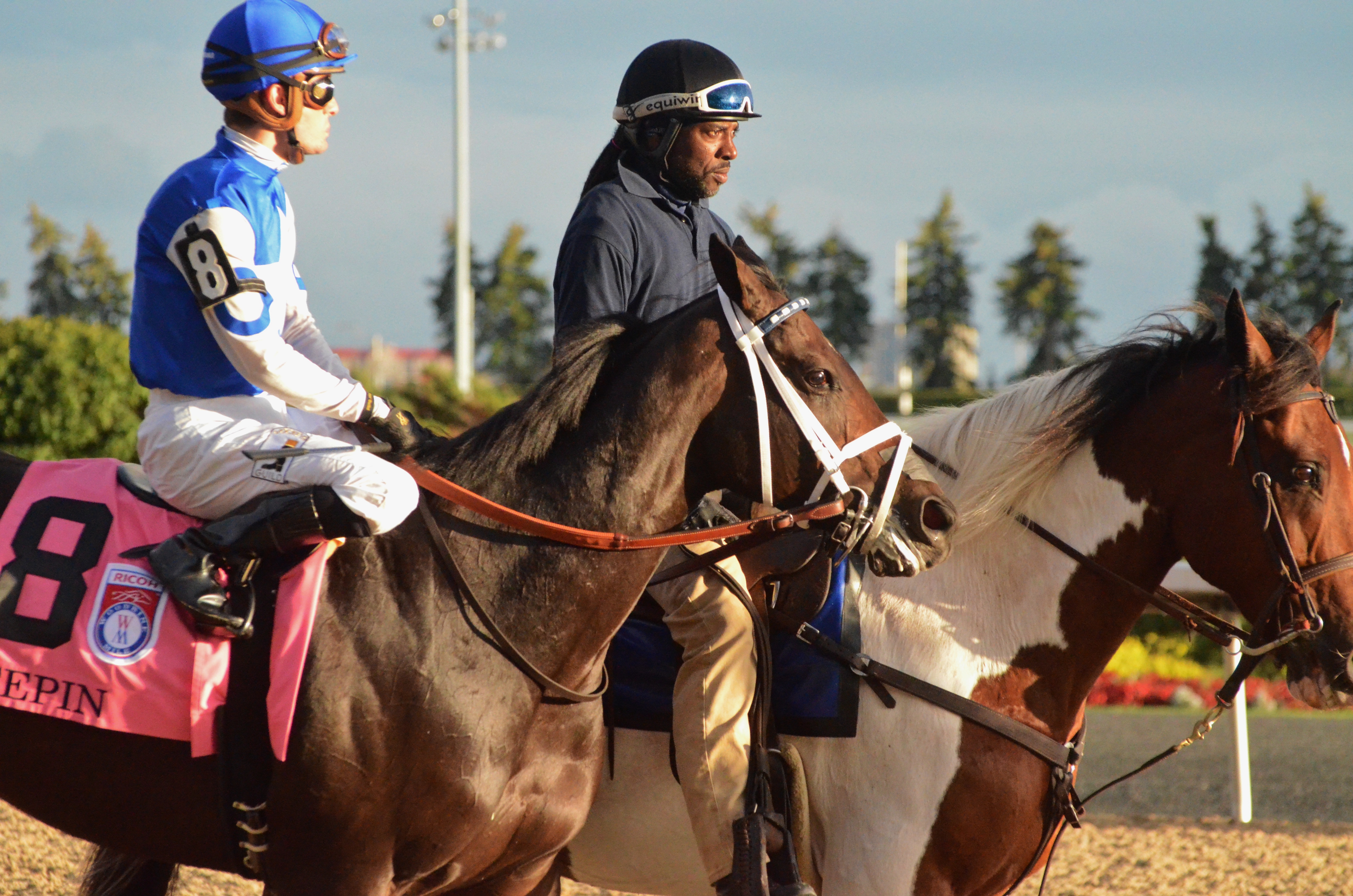 Tepin, the heavy 2 to 5 favourite, won by only half a length, turning back the challenges of earnest 23 to 1 local longshot Tower of Texas and the dangerous British steed Mutakayyef, thundering ever closer. But they had no chance. Eurico Rosa da Silva, riding Tower of Texas, said his 5-year-old gelding was gaining on Tepin, but he had nowhere to go in the stretch, blocked. “When I had room, he kicked on so strong, but the filly already had a couple of lengths on me,” he said. “It’s really hard to make up ground on a good horse.”
Mutakayyef’s rider, Dane O’Neill, he of the piercing eyes, said “We could have done with a stronger pace, but we’d never have beaten the filly. She’s exceptional and she’s right back on song to do what she did today. …She had the race won. We weren’t gaining. She’d done enough and she knew that.” 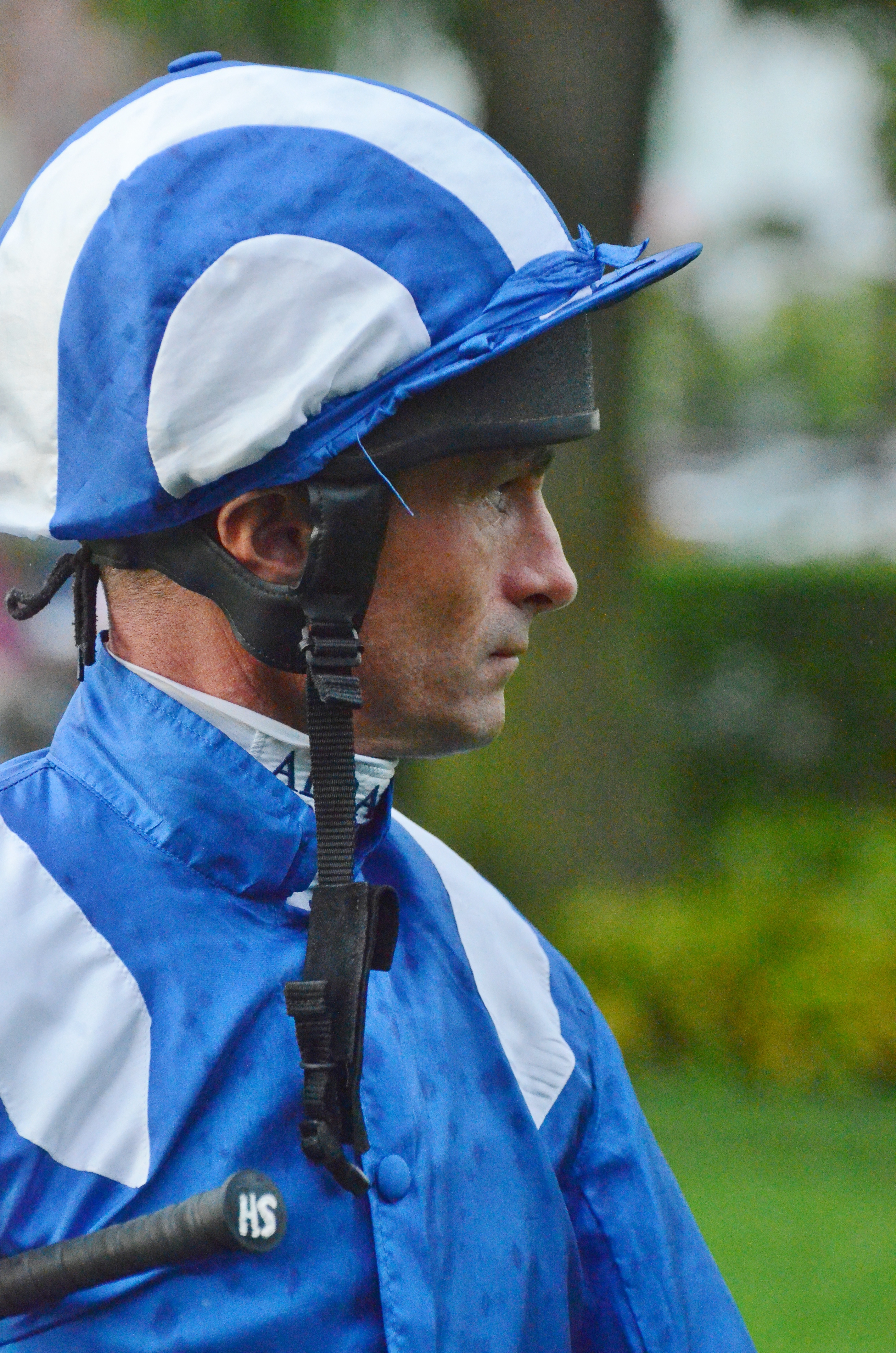 Tepin’s connections know she got a little tired in the final stages, that she needed that race after missing the racing wars for so long, that you can’t just get fully fit off workouts, as rollicking as they may be. And that she won on heart.
And we all saw something we had never seen at a racetrack before. As Tepin returned to the winner’s circle, a large group of spectators on the upper deck of the grandstand began to chant loudly: “Tepin! Tepin! Tepin! Tepin!”
“I’ve never been a part of something like that,” said assistant trainer Norm Casse.”Even when we won at Royal Ascot. It was a pretty emotional moment.”
Never heard such chanting before, said jockey Julien Laparoux, a French-born but U.S. based jockey, who also won an earlier stakes race on the card with Rainha Da Bateria in the $300,000 Canadian Stakes. Laparoux obviously finds trips to Woodbine rewarding. He won another $1-million race, the Queen’s Plate in July with Sir Dudley Digges. 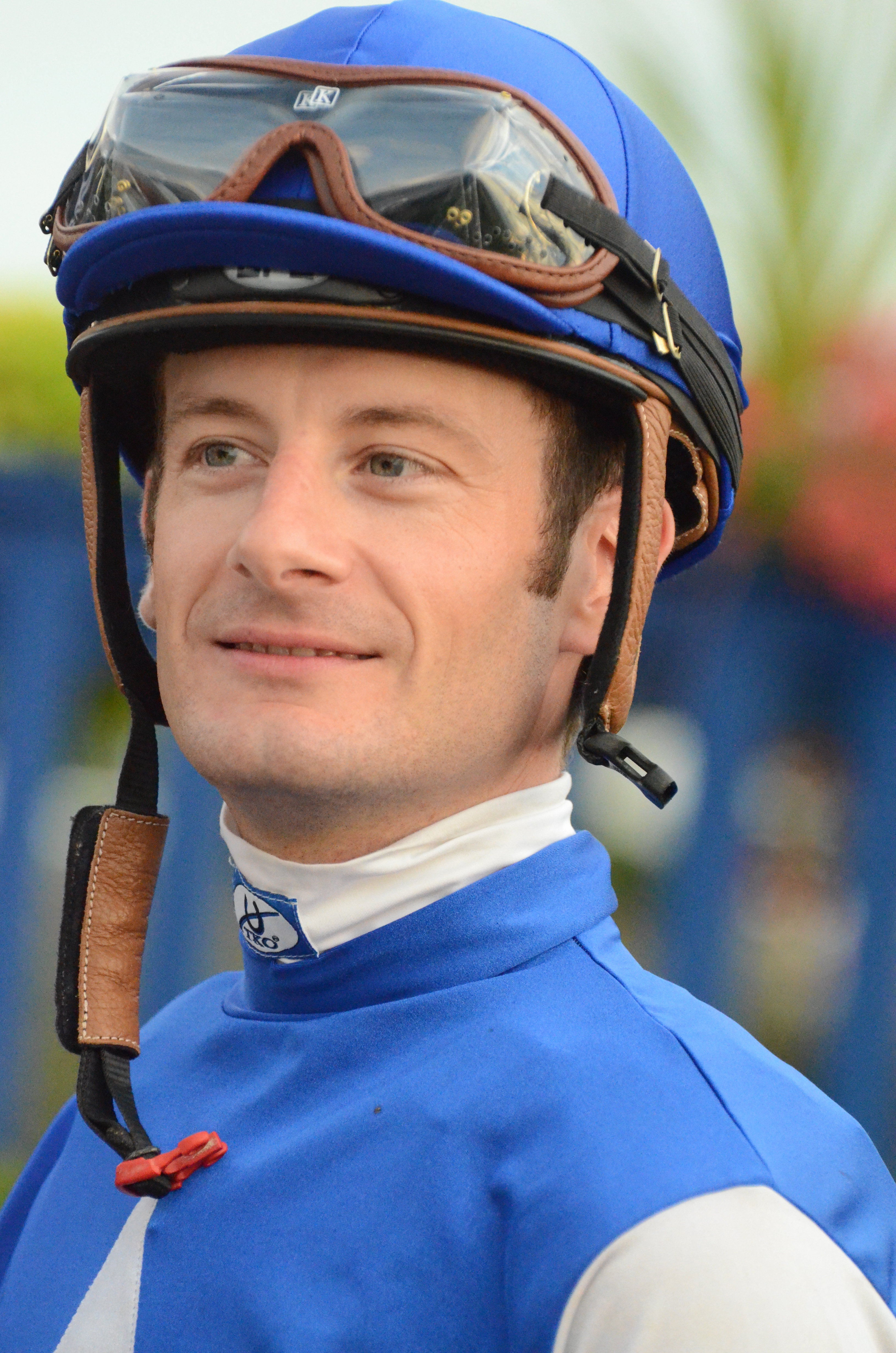 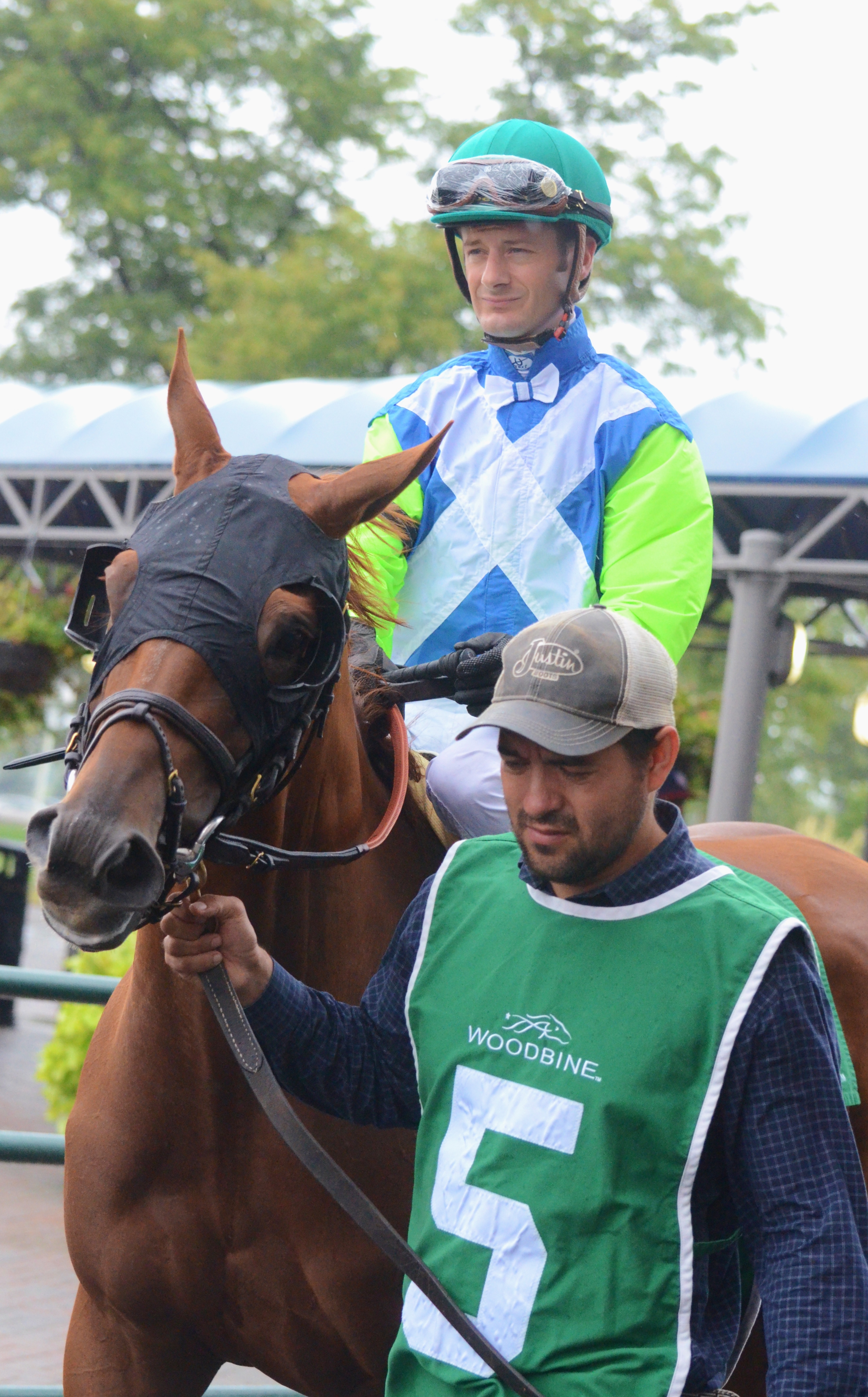 Laparoux with Rainha Da Bateria before the Canadian Stakes

“It’s been for a while now that we can see how people react,” Laparoux said. “When you talk about Tepin, she has a big fan club. At Churchill [Downs, in Louisville, Ky.] everybody came to take pictures of her. So I think it’s been a week since my twitter has been going crazy, since Tepin got into this race. Everybody loves her and it’s great. It’s good for racing and she is good for racing. It’s been great for everybody.” 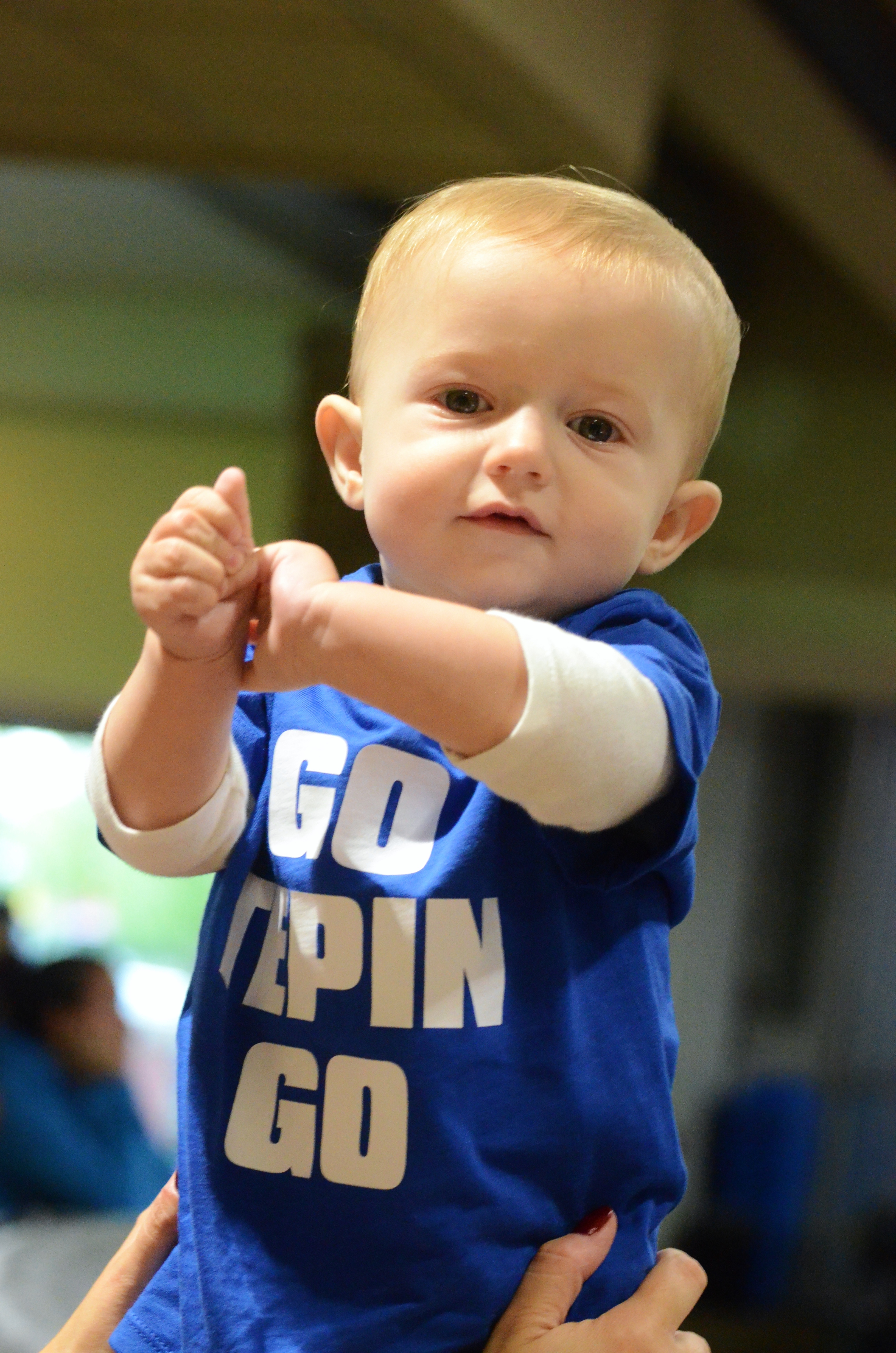 How great? Tepin picked up $600,000, and now has won about $4-million (U.S.) for her owner Robert Masterson, a retired chief executive officer of several worldwide service companies. And Saturday at Woodbine? People wagered $9,638,444 on the 12 races on the card, and completely smashed the previous Woodbine Mile day record of $7,187,062. It’s the fifth highest wagering total ever for a Wooodbine card. All accomplished on a dismal day with steady rain falling. Tepin is good for business, indeed.
Tepin’s appearance at Woodbine was a homecoming of sorts. Her trainer, Mark Casse, has been Canada’s top trainer 10 times, so successful at attracting moneyed owners to buy horses for him, and at building up a group of loyal employees that has made it possible for Casse to open up stables at major tracks in the United States, too. Casse still has a large and lively division at Woodbine, where he is still the leading trainer, even though he has been here physically only about a half dozen times this season.
Casse tried his best to get to Woodbine on Saturday – he’s been attending the Keeneland yearling sales in Kentucky, where he is stocking up on the next generation of top racehorses. He had planned on taking a small plane from Kentucky to Toronto, but felt uncomfortable about pending storms.
That left his son Norman Casse to handle the duties at Woodbine. He’s an assistant to his father, but he has been so much a part of Tepin’s career, that he was more than capable of stepping into the role. 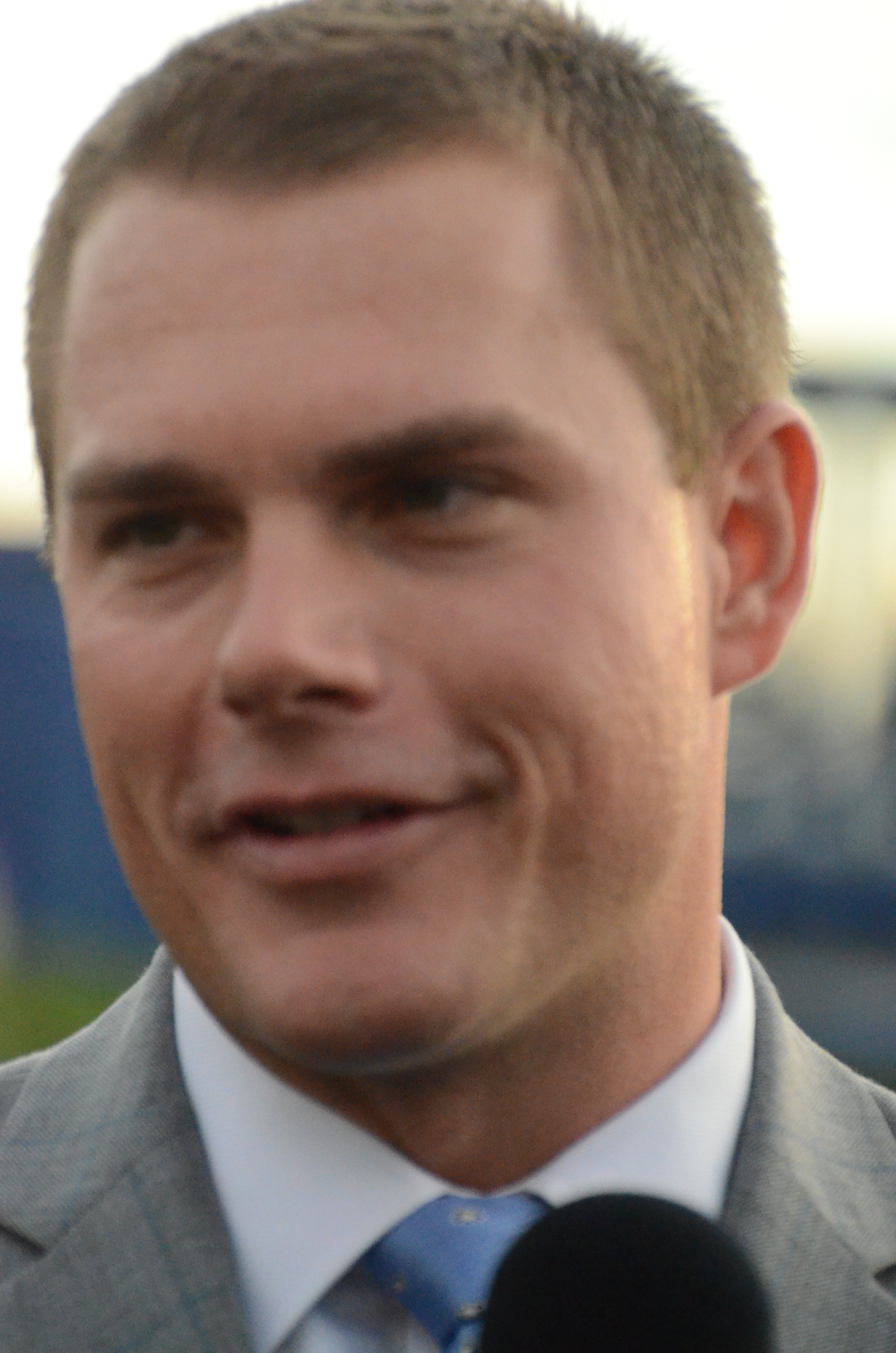 Norm initially showed no interest in his father’s career, but when he changed his mind, he learned by working with the best horses and people in the business. Casse fast-tracked his son.
“This was a real special moment,” said Norm, of winning the Woodbine Mile, a race he feels is Woodbine’s marquis race. And besides, Mark Casse has won just about every race there is to win at Woodbine – except the Woodbine Mile.
“I can’t remember a time when I wasn’t coming to Woodbine,” Norm said. “When I first started in horse racing, I came to Woodbine and this is where I learned everything. And to bring a top horse to win it, it is really, really nice.”
As for Tepin, he’s been by her side for her entire career, as soon as she came to the Churchill division of his father’s stable that he oversees. “I got to know her. I got to know what makes her tick. I know the little things we need to do to get her ready for a big race.” 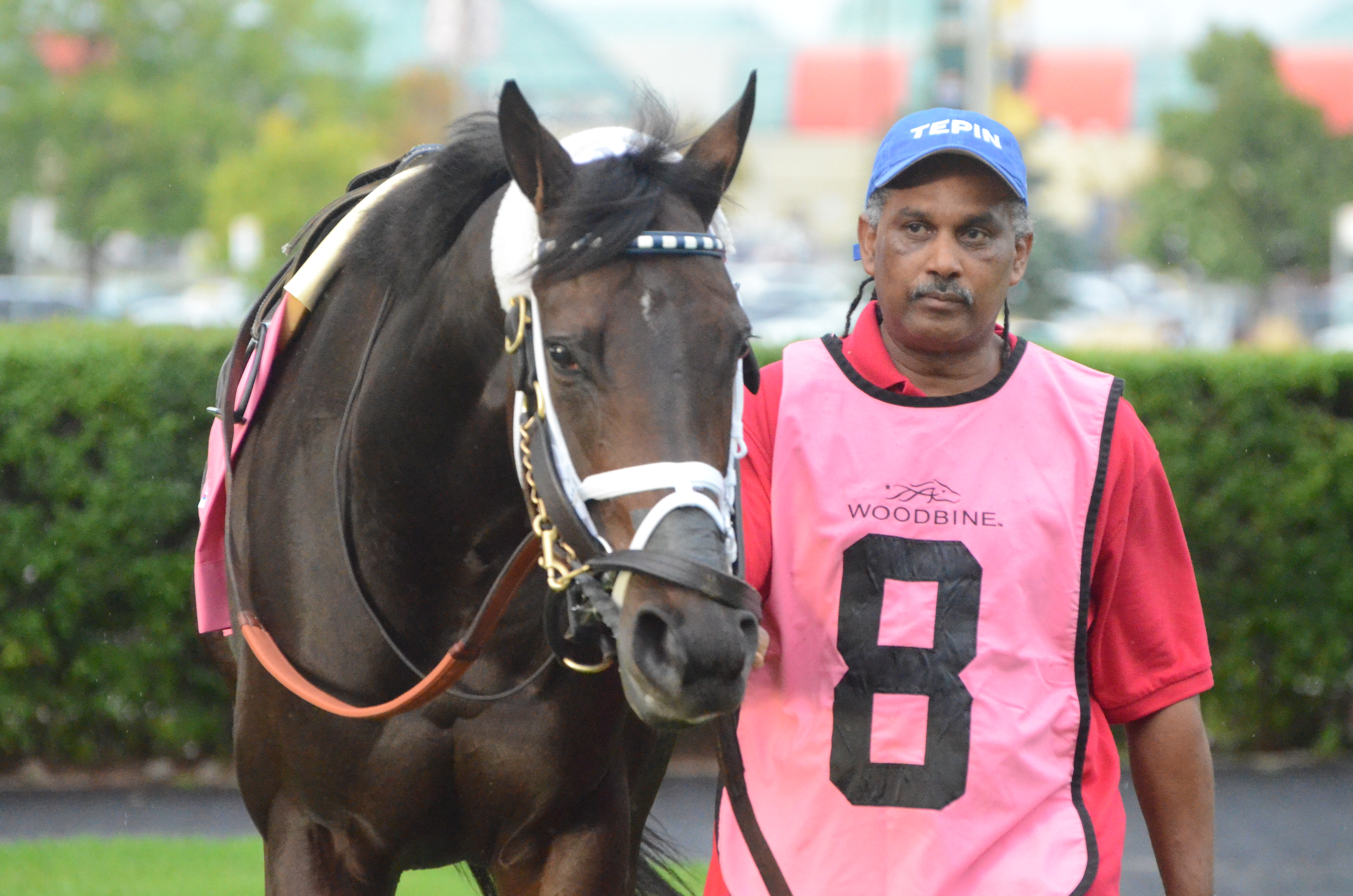 The big question mark about Tepin was whether or not she was sharp enough after such a long layoff to win the Woodbine Mile. Her previous start was in the Queen Anne Stakes at Royal Ascot racecourse in England June 14. Tepin overcame everything – soft turf, etc. – and won by half a length. While Mark Casse feels the hot summer in New York didn’t suit her, Norm feels that the long trip back from England hurt her more. She had a very long van ride across a body of water to get to Amsterdam from England. She boarded a plane to New York, and stayed four days in quarantine. Then she travelled to Belmont racetrack in New York, jumped on another van to Churchill Downs, and then headed back north to Saratoga in upstate New York. “I think any of us would have been wiped,” Norm said.
The Casse stable intended to run Tepin in a stakes race at Saratoga, but her works were lacklustre. They backed off on her training, and then got her ready through some impressive works for the race in Canada. Tepin had never run in Canada. 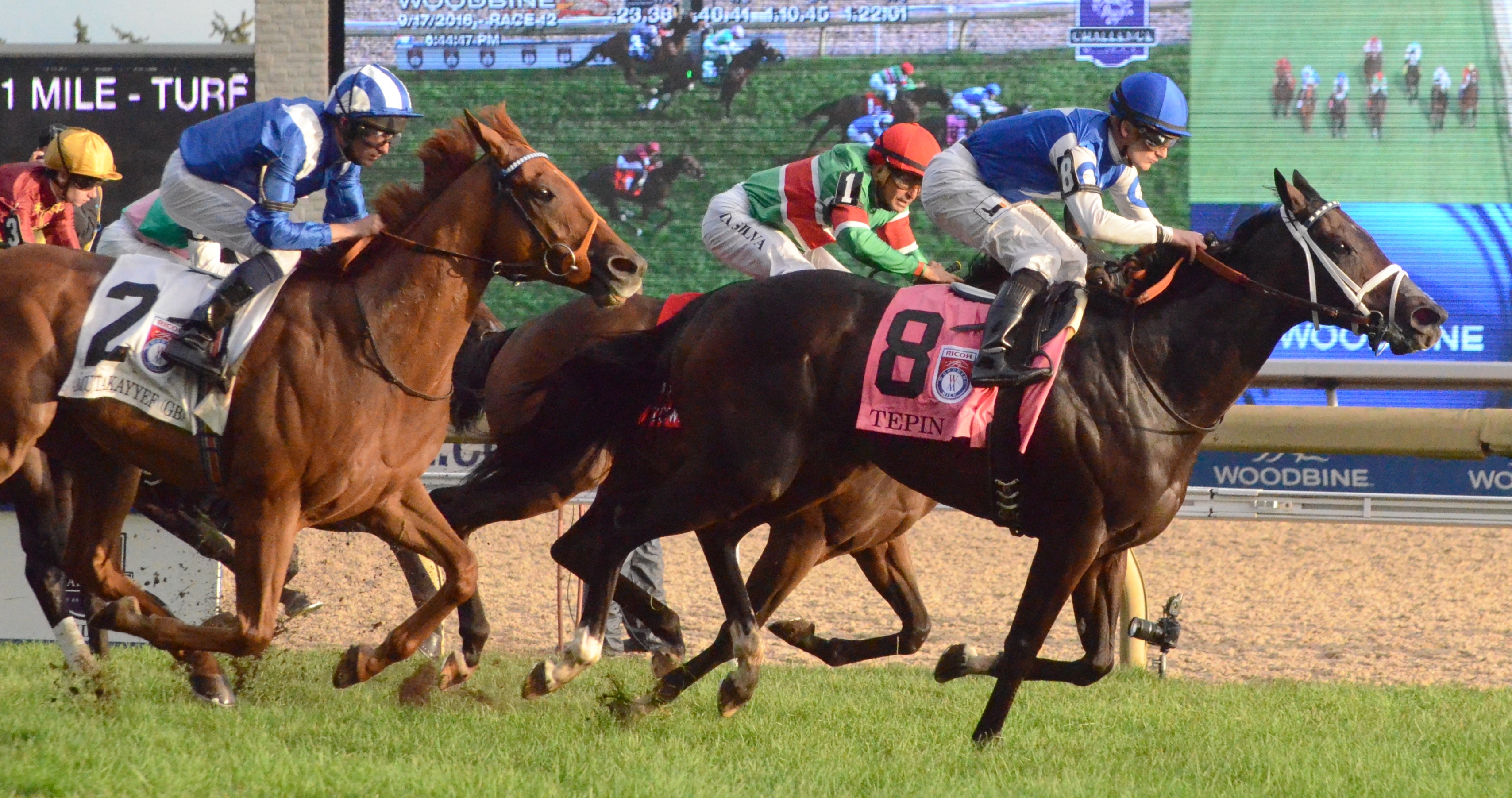 Now, the grinding win in the Woodbine Mile sets her up for her ultimate goal of winning another Breeders’ Cup race. (She won the Breeders’ Cup Mile last year against males, even though she could have run in the Fillies and Mares Turf division.) The Woodbine Mile was designated as a Breeders’ Cup win-and-you’re-in race, so Tepin gets a trip to these world championships of horse racing at Santa Anita in California in November.
First, owner Robert Masterson would like to see her run one more time before that, to keep her on her toes. There are two options: the tough Shadwell Mile at Keeneland racecourse in Kentucky. (Last year’s Woodbine Mile winner, Mondialiste skipped this year’s race to prepare for the Breeders’ Cup in the Shadwell). There, she would run up against males again. The other choice would be to run her against her own gender in the First Lady Stakes at Keeneland in mid-October.
Tepin won the First Lady last year. Laparoux has won it four times. Norm feels Laparoux has been a key to Tepin’s success. “If you look at her form, he may be the biggest change that we made with her,” she said. With Laparoux riding her, she’s been defeated only twice, and by very narrow margins.
Laparoux says the biggest change in Tepin since he started riding her is that she is a racehorse with confidence. “She’s more relaxed,” he said. “It’s almost like she knows she’s going to go and win the race. She’s so much confident, she makes me more confident.”
Because he’s won eight consecutive races on her, he’s very aware that he doesn’t want to snap the streak. “You don’t want to lose any more,” he said. “She’s been winning so much.”
Norm says Tepin showed heart in winning the Woodbine Mile. “She laid it all out on the line,” he said. “She was exhausted afterwards. I had my reservations coming into the race. I thought we had her cranked up, but I wasn’t 100 per cent confident. But now she’ll move forward. And she’ll run a better race next time.” 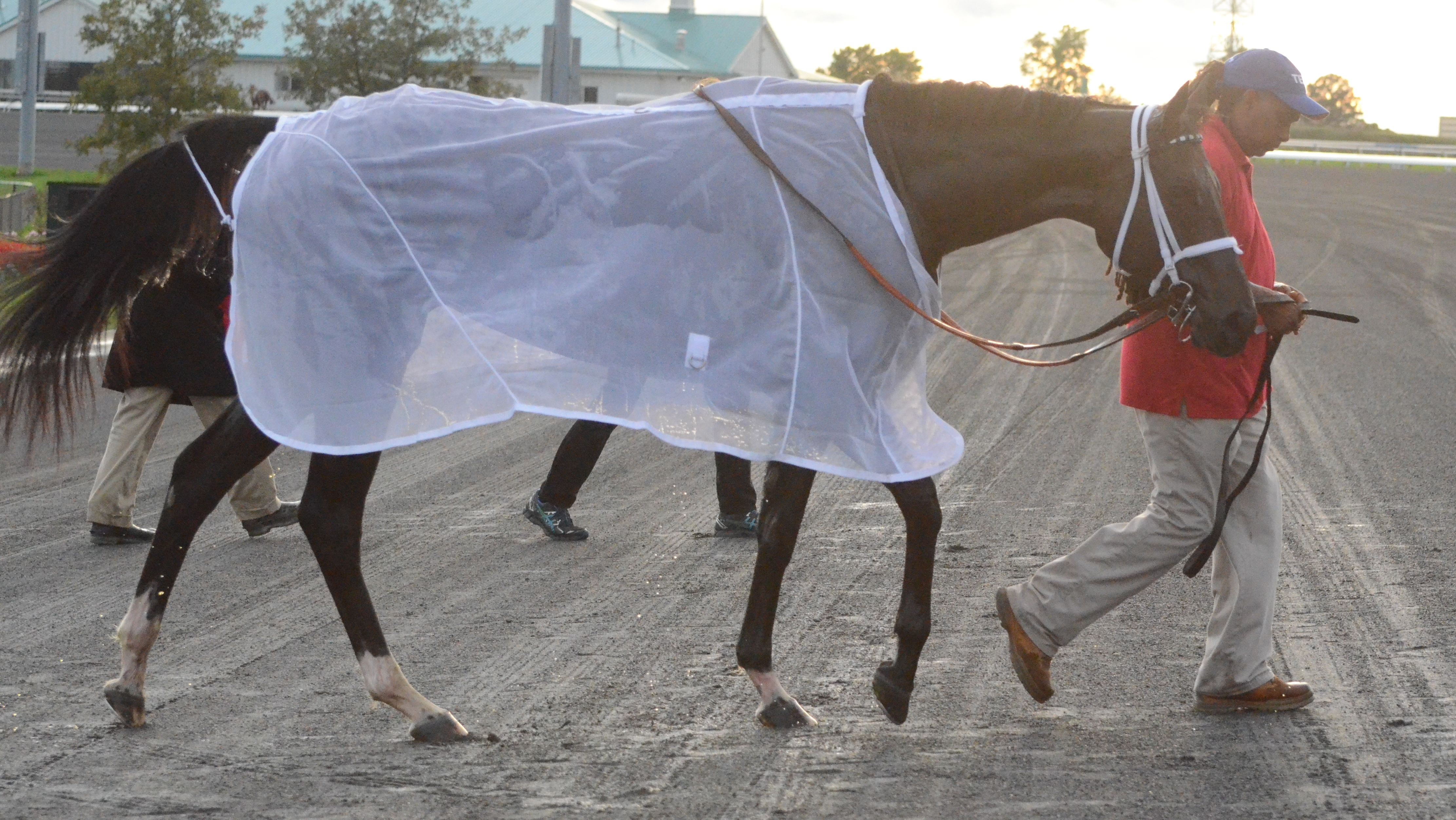 Tepin in her negligee

And that should make her opponents very worried indeed.