You are here: Home / Archives for Conrad Orzel 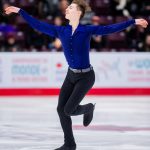 Reigning Canadian champion Roman Sadovsky found it hard to watch himself, remotely, at home in front of a screen, competing at the Skate Canada Challenge – which being that the national championships have been cancelled due to COVID-19 – remains the closest thing to it. When Sadovsky performed his virtual routines about six weeks […]

One thing leads to another. Keegan Messing finished fifth at the Canadian championships last season. That landed him on the national team. That meant he got some financial help for training. And it means that this season, he is actually a full-time skater. Skate Canada photo All of these upticks in his personal situation rolled […]

OTTAWA Stephen Gogolev looks like somebody’s lost little brother who wandered up on the medal podium for junior men, slipping out unnoticed from the cheap seats, looking for ice cream. But no. The 12-year-old with the shy glance won the darned thing. He could have taken his opponents out by the knees, because he stood […]