You are here: Home / Uncategorized / Shepherd Clark: a jewel of a figure
Tweet
0 Shares

Make way, all you Yuzuru Hanyus and Nathan Chens and Javier Fernandezes, and hey, even Evgeny Plushenkos. The real  hero of the World Figure Championships, held this week in Toronto, is Gillis Grafstrom.
Grafstrom, a poetic Swede who was a three-time Olympic champion (1920, 1924, and 1928), a painter, an etcher and by trade an architect, created the mind-numbing intricacies of the Swiss S (the bracket stop bracket- and it’s the “stop” part that is the killer) competed at the World Figure Championships this week. 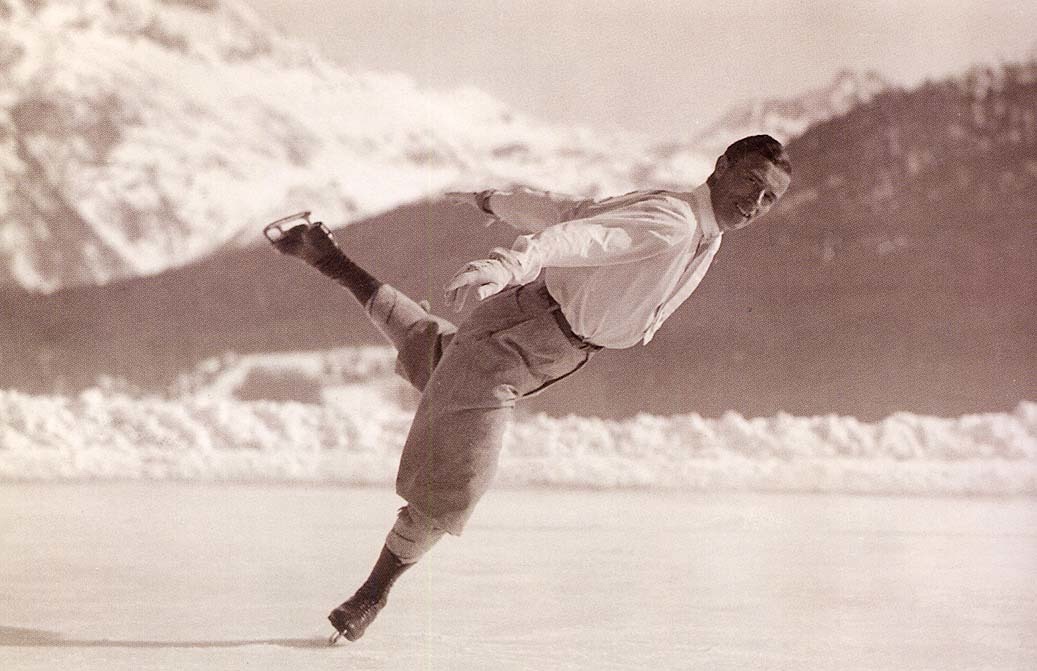 Gilles Grafstrom. Nuff said.
Gilles Grafstrom’s creations (He said he had designed about 50 figures at one time) have brought the sweat out on the brow of competitor Shepherd Clark, a former world junior silver medalist who competed 10 times at U.S. championships as a senior. Now 45, he’s testing his mettle on a side of the sport that disappeared 25 years ago. And that in his early days, he could have done without.
This week, competitors were required to trace that Swiss S, a special figure that had never been competed at a world championship. Control of the blade has never been so important.
At least, Clark competed at a time when figures were part of the game. Clark skated the next-to-last figure ever competed at a U.S. championship. Paul Wylie skated the last one. And the organizing masochists made it the hardest figure they could find: a left forward paragraph loop.
“It was the freakiest one,” Clark said. “It’s extremely difficult. It sounds like backward would be harder, but it’s easier to have flow on a backward edge, even though it’s difficult. When you go forward, you have to have nerves of steel to do it.”
Clark thought his figure was good, strong, decent. It wasn’t his best, he admits. But he was happy with it. And thought he’d never be doing these things again.
Clark stopped competing in 2003. Thirteen years ago. “I find it surreal that I’m here, competing in figures at a world championship for figures,” he said with a hearty laugh.
In the beginning, figures were not Clark’s friend. He was so bad at them when he was a young boy, that even at regional competitions, examiners would stop him in mid figure. They wouldn’t even look at his entire test. They’d stop it. No more, they said.
Please.
“It was the ultimate failure in figure skating,” Clark said.
So Clark began drawing his figures on a piece of paper. Remarkably, his hand made the same mistakes that his feet had made on the ice. But somehow, it all helped Clark figure it out. He moved from his hometown of Atlanta to Denver, Colo., to work with Don Laws, who had coached Scott Hamilton, and then eventually to Colorado Springs to work with Christa and Carlo Fassi. By this time, Clark was winning figures. He’d win short programs. He’d win free programs. His figures career had changed like night into day.
Obviously, Clark has changed his opinion of them. “I’ve always thought that figures should be included in the Olympics as a separate event,” he said. “It has a rich Olympic history. It’s the creating of art on the ice. It has several art genres all wrapped into one. I think you can make an argument that it is one of the hardest art forms in the world, if not the most difficult. It’s creating pictures with your whole body, balancing on a blade and as I like to say, dancing on a crystal in a jeweled sport.”
Grafstrom fits into all of this perfectly. In fact, Clark is a big fan of a man who died 78 years ago, when he was only 44. All you need to see is the photo of Grafstrom in a 1929 photo, seemingly skating into the clouds, a white fedora perched jauntily on his head, his free leg outstretched behind him, his arms just so. Picture Clark in a fedora. You can. 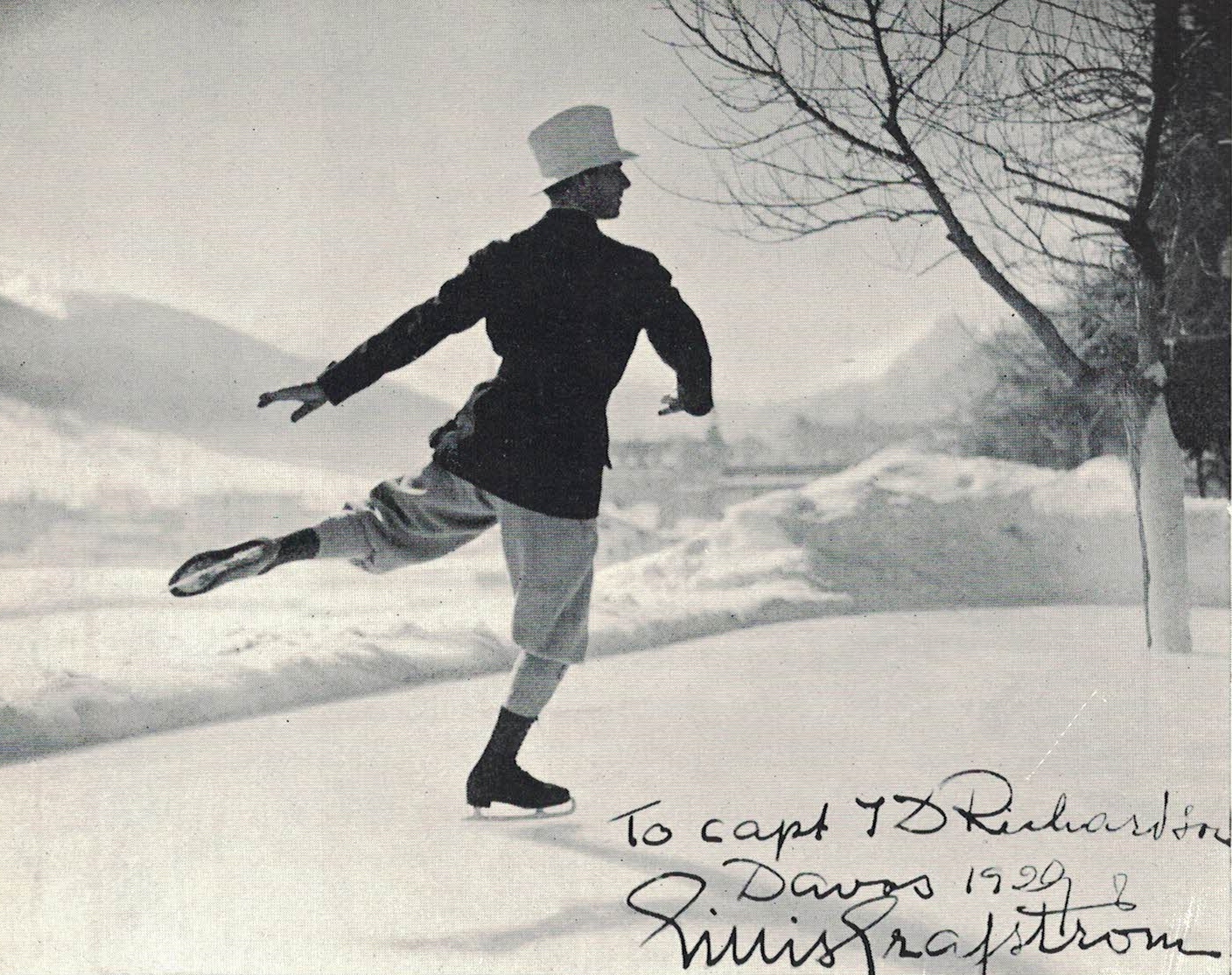 Gilles Grafstrom, poetry in motion.
“Gilles  Grafstrom had a very interesting personal style,” said Clark, who has one, too. “The way he dressed. The way he moved on the ice. He didn’t do all those world championships, but would come into the Olympics every four years and dominate. He had an extraordinary talent for balancing like a cat.” (At the 1924 Olympics, Grafstrom traveled around the last three loops of his loop figure in a crack in the ice that was about an inch deep. No other skater could have accomplished it.)
Grafstrom once worked with Norwegian skating star Sonja Henie, who was powerfully good at figures, too. “She was an amazing athlete,” Clark said. “People sort of glossed over that. We never really knew. I never got to see Trixi Schuba’s figures. I remember Don Laws and Christa and Carlo Fassi talking to me about Trixi Schuba. And I hadn’t met her.”

Gilles Grafstrom with Sonja Henie
Clark finally met Schuba last year at the inaugural World Figure Championships last year in Lake Placid, N.Y. where she attended as a judge. And she’s here in Toronto, too, pouring over the tracings. “I was just amazed that I was meeting this sort of mystical person I had heard about,” Clark said. “I never saw her figures, but she had accomplished something that no one else in the world had accomplished.”
Clark refers to another of the judges, Tim Wood, as an American male version of Schuba. “His technique is really interesting,” said Clark, who worked with him on practice day. “It’s not what I learned. He’s showing this to all the skaters so it is not lost. 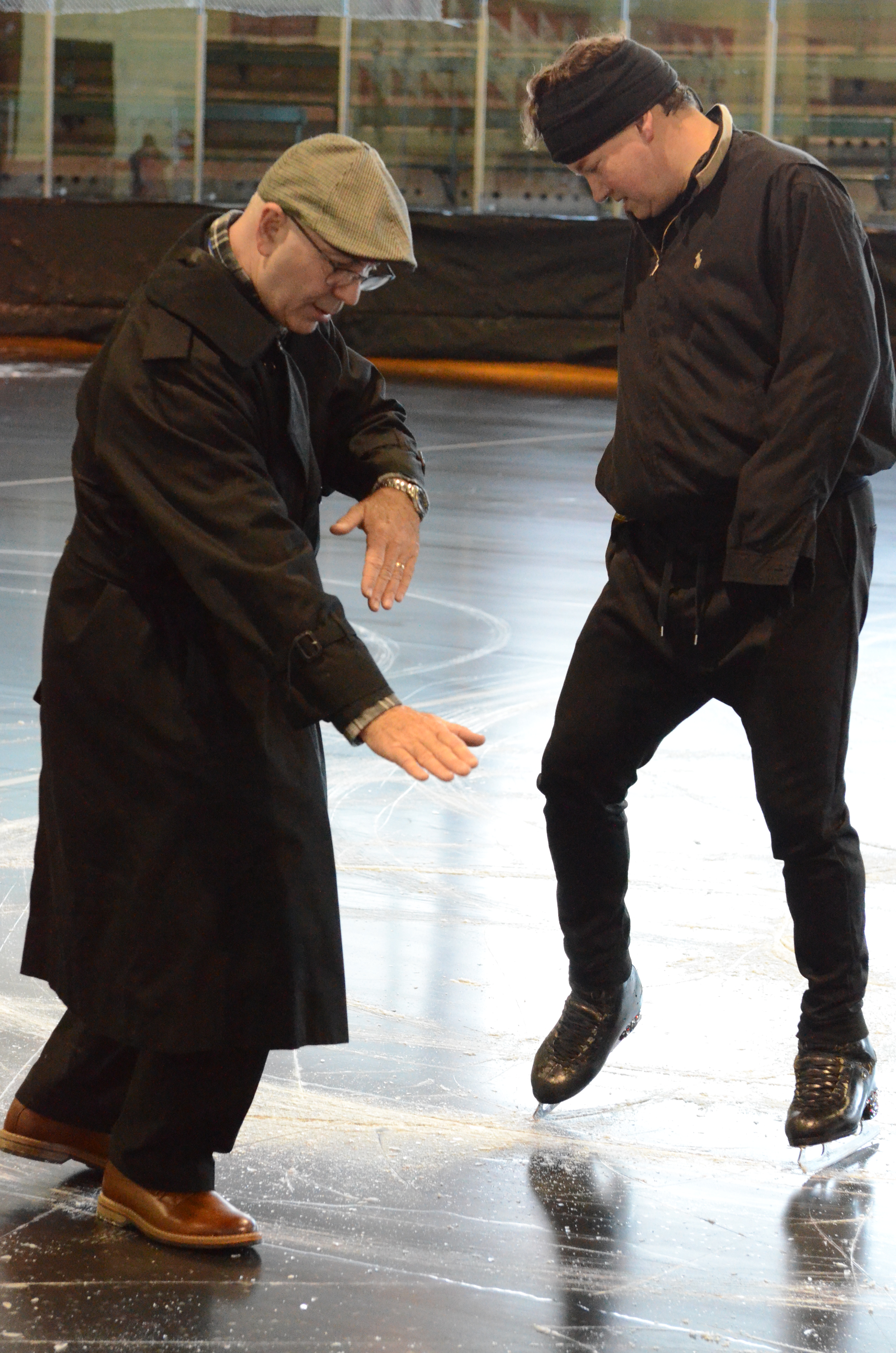 Shepherd Clark and Tim Wood
“I like the fact that we’re doing figures for the first time in competition that haven’t been done in 100 years. So people are having to learn something that no one who is ever alive ever did in competition.”
And that Swiss S that Grafstrom has inflicted on this brave, new world? There are 24 turns to a Swiss S., Clark said. The ice gets pretty rough by the final swish of a Swiss S.
And all that talk of jewels and such? Well, Clark is a jeweler by trade, among a host of other pursuits. He creates paintings encrusted in jewels. The heels of his skating boots are bejeweled. An entrepreneur, he also has a soft spot for a cause, for charities, for people that need a hand up, for a sport that needs a hand up, too. He designs jewelry to help raise money. 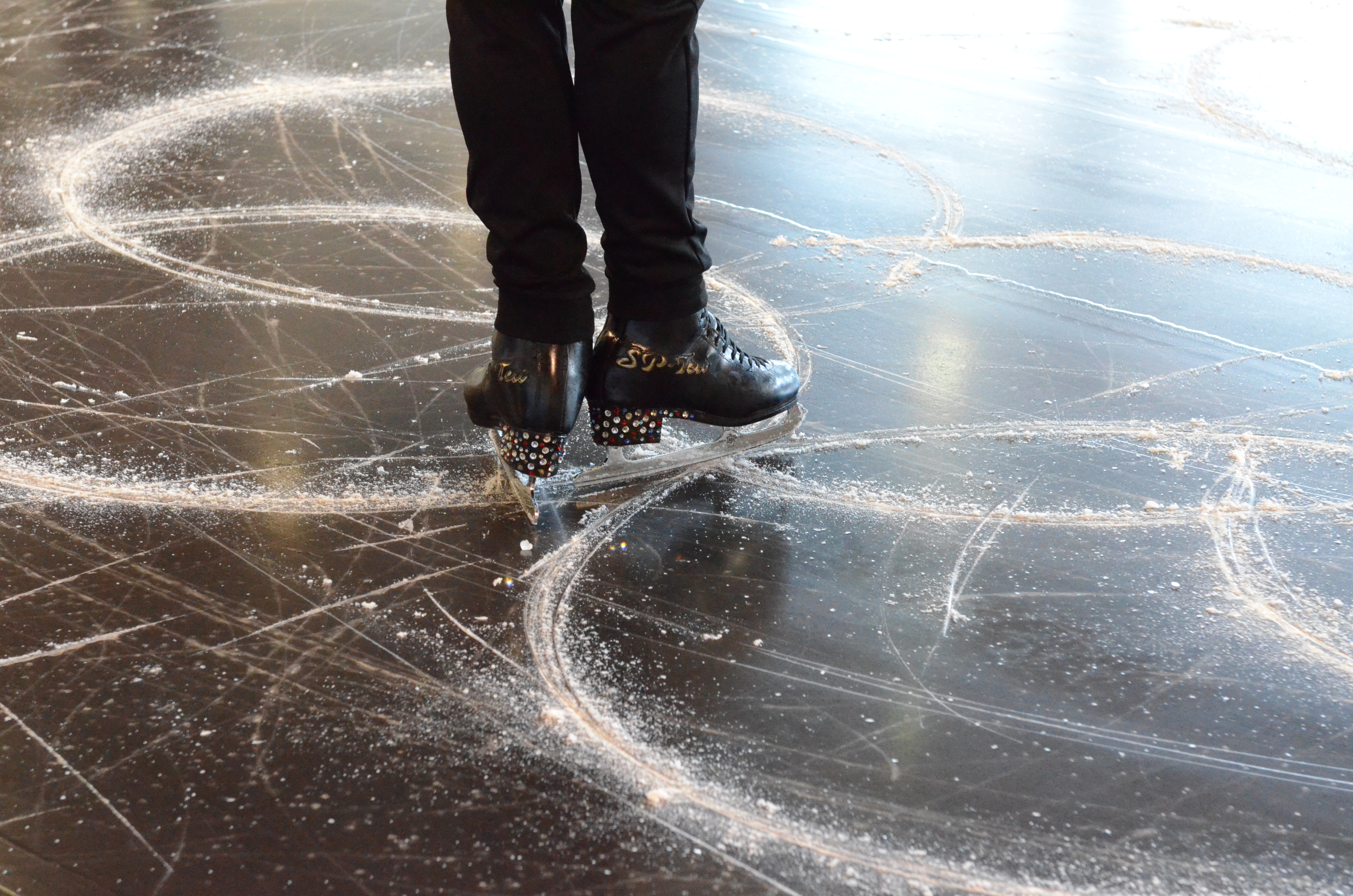 Clark’s sparkly heels
He’s currently working to put together a television series based out of Los Angeles. It has a jewel theme, of course.  It’s a story about an eccentric jeweler who shepherds people, generates money to do good in a challenging economy. It sounds like Clark, himself.
“It’s people who reflect light,” Clark said. “People are precious.”
Clark, a silver medalist at the first world championship last year, took another silver on Wednesday after producing a creative figure with infinite interwoven curves. In other words, the Olympic rings.