Yes, Stephen Gogolev is still only 12 years old, a ghost-like little form who expresses his intent on the ice. 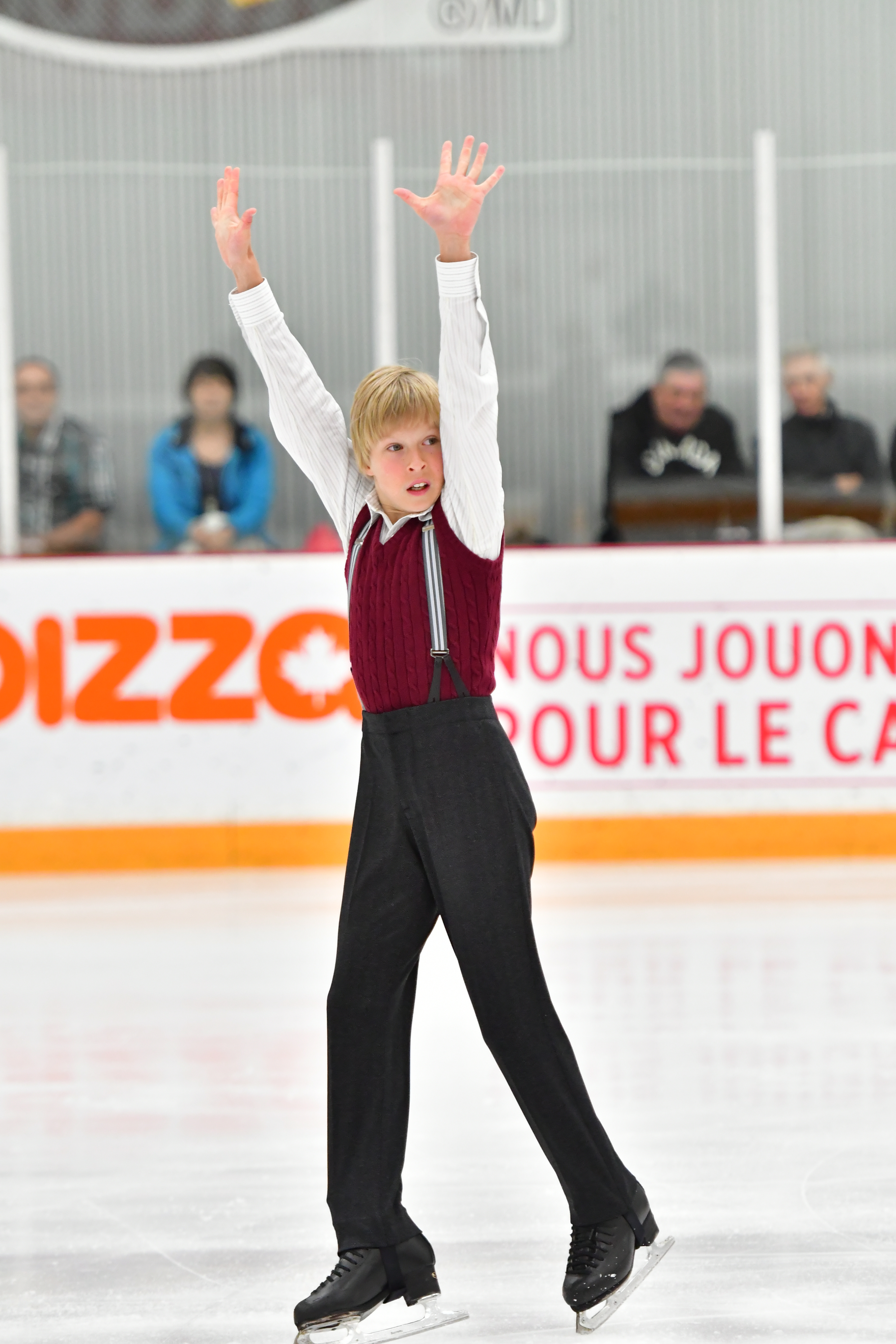 Photo by Danielle Earl
He’ll be 13 in December, too young yet for the Junior Grand Prix circuit, but nationally, he’s making the huge leap from junior to senior. “It was kind of an easy decision,” says coach Brian Orser. “But now if you’re going to skate with the big boys, you’ve GOT TO SKATE WITH THE BIG BOYS.”
In other words, step it up to that level.  So far, Gogolev is handling that part and it’s really only pre-season. At Minto Skate earlier this month, he won the senior men’s event over Roman Sadovsky, Nam Nguyen (fifth at the 2015 world championships), Bennet Toman, and Olympian Liam Firus. He defeated Canadian bronze medalist Nicolas Nadeau in the short program. Nadeau didn’t compete in the long.
Nguyen is 19. Sadovsky is 18. Messing is 25. Bennet Toman, who will represent Canada at the U.S. International Skating Classic next month, is 20. He has a couple of quads in his bag, too. Nadeau will be 20 next month.
Last Friday, Gogolev also finished second overall in the Thornhill Summer Skate behind Nguyen, although the wonderkid had to come from behind after a short program that left him in fifth place. He won the free skate, as he had at Minto. At the Ottawa event, he had emerged with 218.28 points overall. Thornhill? 227.94, about 10 points behind Nguyen.
At Thornhill, Gogolev tried two quads in his free program for the first time.  He’d done only one in Minto. He landed the first one, a formidable, big quad Salchow-triple toe loop, and then sat down on the second solo quad Salchow. However, he dusted that miscue off, and didn’t put a foot wrong afterwards. The jumps kept coming. And coming. (At the Canadian championships last year, when he won the junior title over Conrad Orzel, Gogolev  attempted no quads in the short, and only one in the long. His winning score was 210.06 points.)

Interestingly enough, Gogolev’s scores in the past two competitions would have made him eligible for the world SENIOR championships last year. The threshold for the free was 64 technical points. At Minto, Gogolev earned 76.96 points. At Thornhill, he dazzled, with 92.90 points.
So now, it’s time to run boy, run. “This world is not made for you,” goes the song by French singer/songwriter, video director Yohann Lemoine, whose stage name is Woodkid. “This ride is a journey/The secret side of you.” The song is part of the Golden Age album; to Lemoine, childhood is a golden age. And Gogolev is still in it.
Lemoine wrote the words for the song with another perspective in mind. But they fit Gogolev’s quest this year. And cleverly, it has become the music for Gogolev’s short program. With its neofolk sound, it’s a different approach for the youngster.

“Tomorrow is another day,” chants Woodkid.
“And you won’t have to hide away.
You’ll be a man, boy.
But for now, it’s time to run. It’s time to run.”
Orser always seems to have an answer for every push, every problem and this run of Gogolev’s . He’s a creative coach, says Oula Jaaskelainen, who represented Finland at the 1992 Olympics and is now a coach in South Africa. He trained with Orser at the Mariposa Skating Club.
Jaaskelainen sees Orser’s passion, and sees the mind constantly at work. There is never one answer to a problem. He finds a way.
Orser’s answer to his plan for the progress of his young protégé was to send him for five days to Montreal  to work with Patrice Lauzon, Romain Haguenauer and Marie-France Dubrueil. “It was one of the best things we did,” Orser said. “He did power stuff. Stuff he can learn with us, but he just needed a change.”
Gogolev earlier had connected with Lauzon during a Skate Canada development camp. And what great fun: Shoma Uno was training in Montreal at the same time during this summer’s sojourn. “They were doing edge class with the dancers and they were just telling me that he’s such a better skater,” Orser said. “That sort of validates what we do.”
In the free program, Gogolev is going with the classics, to a medley from the Mozart movie, “Amadeus.” In the free, Gogolev is Amadeus, at least musically. Mozart was a prodigy, too. He wrote his first symphony at age eight.
Not only has Orser and friends bumped up Gogolev’s technical content, they have also been working to bring out his performance side. “But for 12, that’s hard,” Orser said. “I just go back to when I skated. It took a while for me to start putting it out there. You can’t fake it. Then, maybe just let the edges be your voice. His speed is so much better than last year.”
Spins? He does a donut spin that sinks low into a sit spin. Beautiful.
And the jumps are bigger. His quad Salchows are a tour de force. He did not attempt a quad toe loop in Thornhill, because Orser put that jump temporarily on the back burner. “He was having a few little injury things,” Orser said. (At Minto, his second jump was a triple toe loop). But Gogolev can do a quad Lutz very well. He’s landed all of the quads: toe, Salchow, flip, loop, Lutz.
Although his quad toe loop is on sabbatical, it was quite good too. “We’ll get it in next,” Orser said. “So now that he has the two quads, then maybe it will be three quads.”
“All these kids are pushing the envelope,” sighed Messing, the elder statesman of these summer events.  “They’re pushing us old guys around.”
So Gogolev, his blond hair drifting in the wind, is running as fast as he can. “Running is a victory,” the Woodkid song goes. “Beauty lies beyond the hills.”