You are here: Home / Uncategorized / Queen: Love of My Life
Tweet
0 Shares

Okay, boys ands girls, indulge me.
I did a posting some time ago of my discovery of Queen and Freddie Mercury, especially as they tie to figure skating, because ever since vocals were allowed, so many people have turned to the emotional, theatrical, endlessly creative and varied work of the foursome from England. 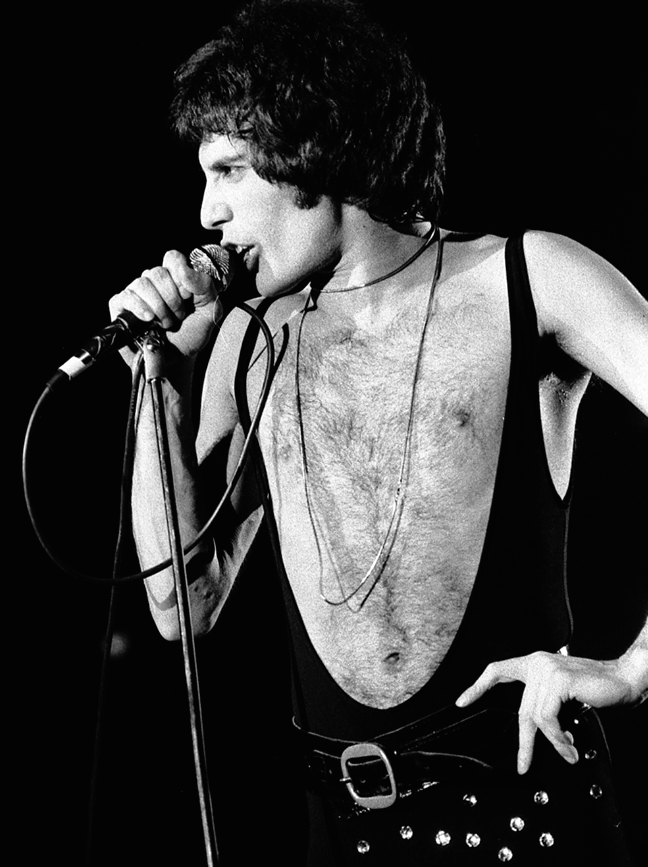 Freddie died almost 26 years ago of AIDS, and bass player John Deacon retired to become a recluse a few years after the loss of the lead singer, declaring that Queen wasn’t Queen without him. And so there are two. And last night they were in Toronto, a little longer in the tooth and a little greyer (well, a lot, actually) but they hadn’t lost a step. And I was there to finally see it all, to see Brian May’s fingers pluck his Red Special guitar, the one he made with his father as a teen out of wood from an old fireplace and a table, and a motorcycle and his mother’s knitting needles. And he’s still using it. It’s a shiny wondrous thing, with its own guards. And Roger Taylor is still beating powerfully away at his drums with a cool vengeance. He wears hearing aids now. 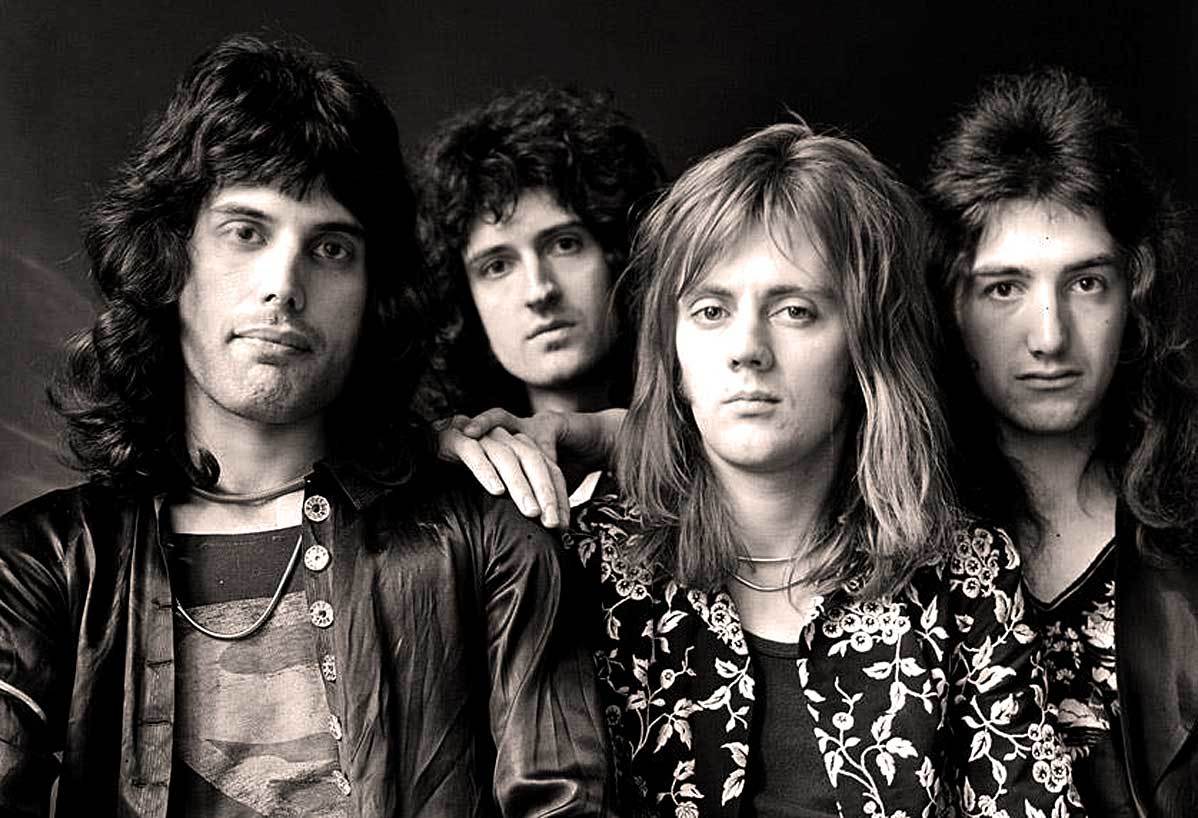 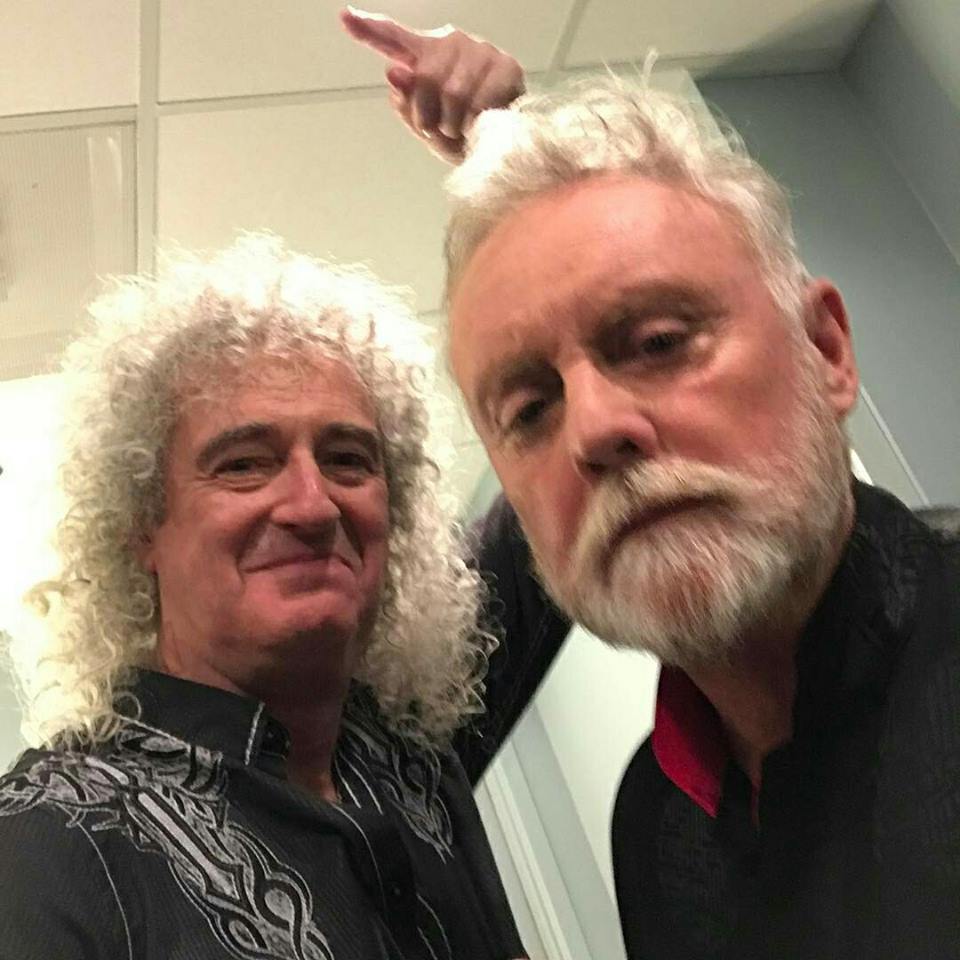 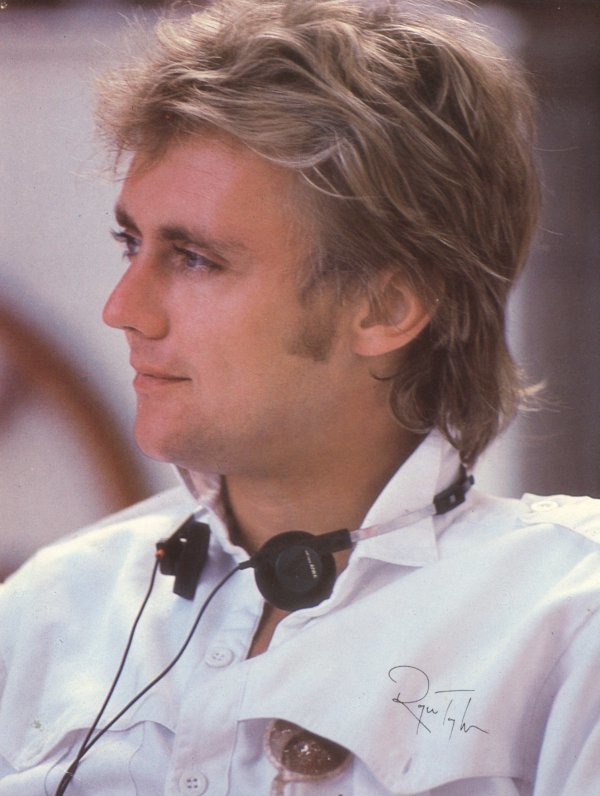 Roger Taylor in his younger days.
I’ve been waiting for this two-hour show for months. As always these days, there are throngs of people walking the streets of downtown Toronto, but members of this crowd on this day sported many Queen t-shirts. I knew where they were headed. I stopped for dinner at a local eatery around the corner from the Air Canada Centre and heard the barman tell a patron that yes, Queen was in town, and the clientele tended to be mothers bringing their daughters. What? Really? Okay, Queen was popular in the 1970s and 1980s, but their music is timeless. And in this newest incarnation, 35-year-old Adam Lambert, he of American Idol fame, is fronting them. (Brian May turned 70 the next day, and we all sang happy birthday to him. Taylor will turn 68 next week. If Freddie had lived, he would be approaching 71.)
And let’s not forget Deacon, the quiet one, the latest member to join, the youngest one. He will be 66 in another month.
The Air Canada Centre was packed. A sellout crowd, with people of all ages and more security than I’ve ever seen there. The concert was to begin at 8 p.m., but didn’t actually start for another 45 to 50 minutes. People stayed in their seats, piqued by an occasional burst of dried ice mist from the end of the stage, shaped like May’s Red Special guitar. (Queen does seem to like to launch their shows with lots of fire and brimstone and rising clouds of vapor. It’s great and somehow very Freddie!)  It all heightened the suspense. It was a successful tease. I felt wound tighter than a yo-yo ball.
For the longest time, we could hear rumblings of music from behind an enormous stage that featured a large curved wall, supposedly made out of pieces of metal riveted together with life-sized letters of QUEEN emblazoned across the front. At my first sighting of this, I knew I was in the right place, that it wasn’t just any other visit to the Air Canada Centre.
Suddenly, this enormous “tin” stage started to heave from its moorings, then drop back down with a mighty bang. Again and again as if it was so heavy, forces couldn’t quite lift it. But Frank could.

Frank is the name May and friends have given to the robot that graced the cover of their “News of the World” album, released in 1977 that includes the hits “We Will Rock You” and “We Are the Champions.” Of course, it’s the 40th anniversary of the album release. On the album cover, the robot is fearsome, a giant intelligent force that has scooped up the dead bodies of all four Queen members, with blood dripping from a metal hinged finger. That scene always scared the wits out of me. I never wanted to look at it. 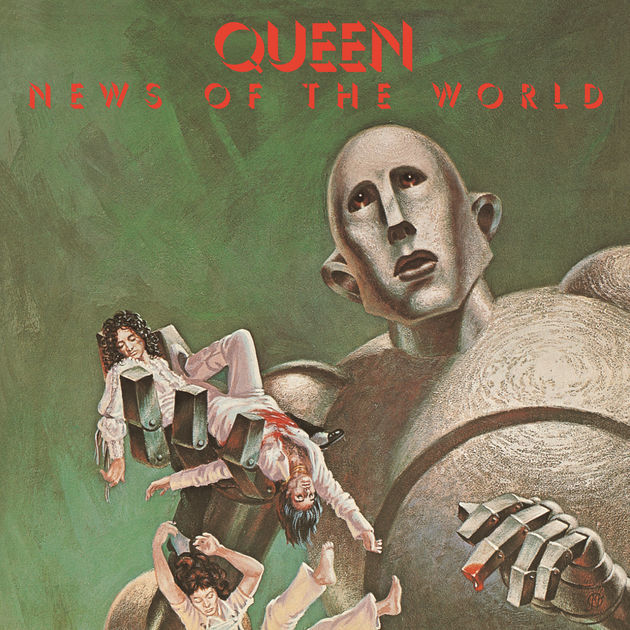 But the Frank on this tour seems a handy accomplice to Queen. Rather a treat. Suddenly and loudly, his giant metal hand “broke” through the wall of steel, allowing Frank and his purple eyes to peer through. (Queen loves the dramatic. Queen members never just stand around and jiggle on stage. They create. It has to be big and glam.) You are never entirely sure whether or not Frank’s big fist is going to come out and grab you, as he has done others in the past. The crowd fell silent as this fist meandered in and out of the hole that Frank had made.
Suddenly, Frank’s hands clamped against the sides of the stage and lifted it up to reveal Queen and Lambert. And when I saw them, for the first time in my life, I felt tears welling up in my eyes and yes, even the odd one running down my cheeks. Sorry. No control over this. Thankfully, it was dark, save the light illuminating the stage.
Well, really, I had shed all of my hard-won dollars for a ticket to see May and Taylor. Just those two, to be sure. Lambert eventually brought up “the pink elephant in the room” (dressed in a three-piece pink suit with lofty heels, all sparkly). And this elephant is of course the argument that Queen is not Queen without the powerful voice and persona of Freddie. I buy that.
There will never be another Freddie. It’s not possible. Yes, Lambert has a powerful voice, a miraculous voice that hit notes uncommon to man (Freddie’s notes). In Toronto, he was brilliant in “Under Pressure.” (Roger Taylor’s husky voice filled in for David Bowie), “Radio Ga Ga”, “I Want to Break Free” and “Who Wants to Live Forever.” He rocked those tunes. He was quite effective in “Bohemian Rhapsody,” too.
Queen inserted one of Lambert’s own new pieces: (I Don’t Give) “Two (Fuddle Duddles).” (And if you are Canadian, you know that Fuddle Duddle is a kinder, gentler version of a swear word made famous by the current Prime Minister’s father, Pierre Trudeau, ever the edgy one.)
I could have done without this Lambert “Two Fux” song. The crowd had quickly risen to its feet when Queen came on stage, to run through some famous numbers, but as Lambert began to sing his Two Thingies song, they all sat down. “Killer Queen” was next, with Lambert rising high in the air on the head of Frank, his eyes rolling up at the pink-clad cargo. The crowd rose to its feet again at the sound of traditional Queen fare.
I can see why Queen embraced Lambert, with his voice and his amazing abilities. Without him, these tours would have been impossible. They would have been finished. There’s an old video of Taylor and May returning to the studio in England where they recorded “Bohemian Rhapsody” and it seemed almost poignant that they were picking up the sticks and strumming the guitar again, their careers a fond memory. But they have made it happen, brought the magic all back again, with Lambert in tow. And they can still rumble with the best of them.
Still, Lambert is not Freddie. Freddie had me during the 20-minute video of Live Aid concert from 1985. Actually, I think he had me after 10 minutes. Hell, probably five. His persona and voice were so very powerful. Every move was charged. He was lord and master of the stage. There was a palpable connection to the crowd. As great as his voice is, Lambert doesn’t quite always reach the Freddie mystique. It’s not just that Lambert can’t possibly replace someone else, it’s just that he can’t quite do what Freddie did. Freddie could direct an entire crowd of hundreds of thousands and have them all in the palm of his hands, the sweep of his arm, the cheekiness of his delivery. Lambert couldn’t get this crowd to sing along.
So of course, in stepped Freddie himself in Toronto. The loveliest moment was “Love of My Life,” a duet that Freddie used to do with May. May played an acoustic guitar, not his Red Special, and Freddie sang this beautiful ballad that he had written. But in Toronto, May appeared on the stage alone, sitting on a chair far out on the neck of the guitar-shaped stage, directly across from me. There’s something wistful about the sight of May going it alone. It was singalong time for the audience.

But for the final verse, May turned and behind him on a huge screen was Freddie, singing the way he did during the final tour of his life. Was there a dry eye in the house? Not in my corner. On the screen, Freddie took his bows, impishly showed his rump as he was wont to do, and quietly walked away into the darkness. May appeared to wipe tears from his eyes, and as he walked back to the main stage, I could see him take a deep breath. He’s done this routine many times in the past few years, but it still affects him. And us.
The way it was, the duet:

Freddie showed up twice more. Very effectively doing the “ Aiyo!” routine he did at Wembley stadium in 1986, dressed in his yellow jacket. The one where he tosses a glass of water (?) into the crowd. Entices them into crazy flights of song. (And they answer every time). And then finally, smiling, he says: “F…. you!” The crowd in Toronto did the same, as if he was still alive. When he came onto the screen to do this, there was a mighty cheer. Let’s be honest: whenever Freddie appeared, it was bedlam.

Freddie returned for the final song, “Bohemian Rhapsody,” a song that he wrote, engineered, developed and used to mystify the world about its meaning. It’s a deeply personal song, so to have Freddie return to the screen at the Air Canada Centre to sing the famous, ground-breaking video (“Bismillah! I will not let you go!”) was truly as it should be. The crowd began to swing their lighted cell phones to the music. Magical.

On his final tour, Freddie wore a crown in the finale. This time, Lambert donned it for the final few numbers. But at the end, he planted the crown atop May’s head. As they took low bows, May’s crown toppled unceremoniously onto the floor. He quickly grabbed it, and Taylor got  a crown too. Another bow, and May had to push the crown back on with his Red Special. It was wonderfully imperfect and human.
An encore, a puff of smoke, and gold streamers, and Queen had left my life, at least physically, again. I’ve been floating on some ray of happiness ever since.
And yes. We miss Freddie. 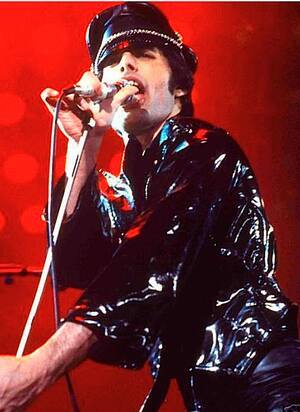 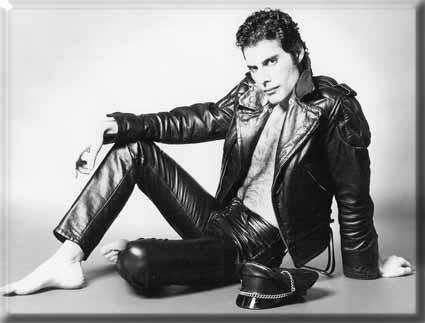 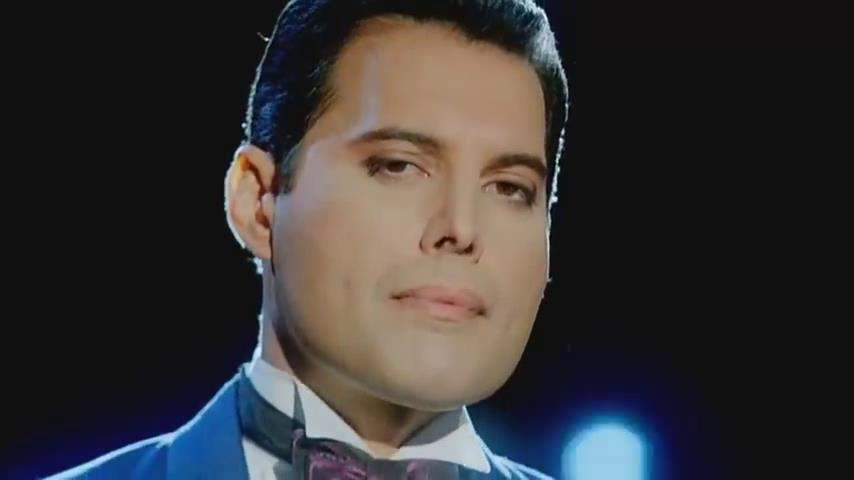 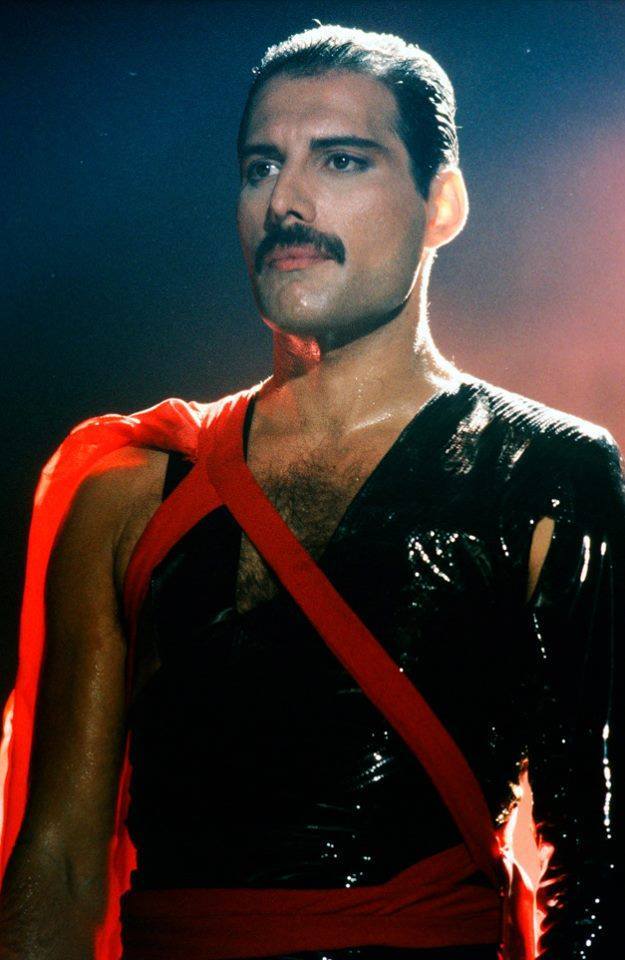 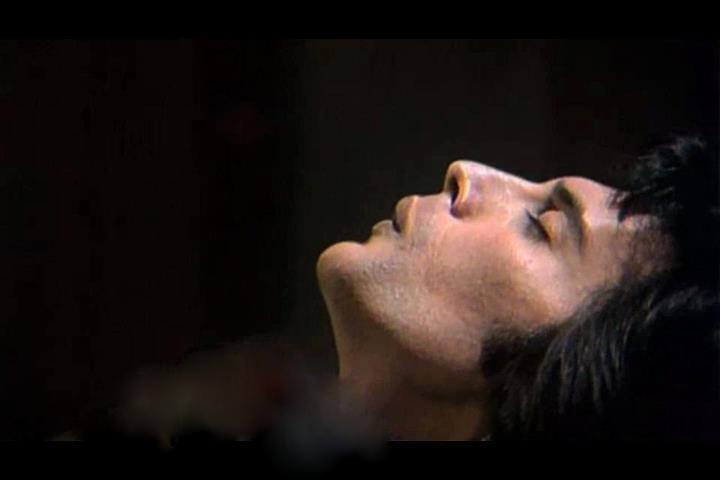