You are here: Home / Uncategorized / Osmond turns back to Piaf
Tweet
0 Shares

For Kaetlyn Osmond in this very important Olympic year, what is old is new again.
Starting next week at Autumn Classic, the world silver medalist will be going back to her masterful Edith Piaf short program of last season, leaving behind the exquisite “Summertime” on which she has toiled all summer.
It’s hardly a panic move. It’s a carefully calculated weighing of feeling and confidence, of impact and drama. 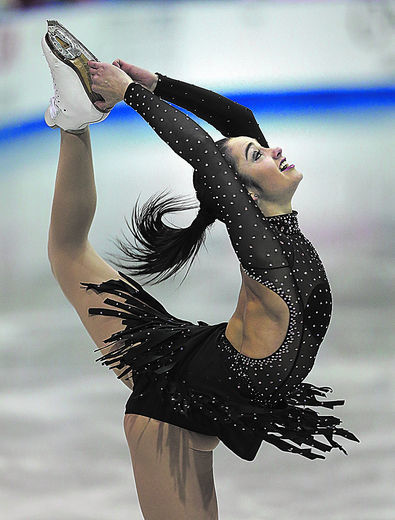 When judge monitors saw her new “Summertime” short program at the national training camp in late August, they gave a ripple of thumbs up, loving its feeling, the mood Osmond created, the maturity of it all and the choreography (done by Lance Vipond, who also created her Edith Piaf routine). Osmond loved it, too.

At the end of last season, after Piaf’s “Sous Le Ciel de Paris” and “Milord” had given her so much sparkle, Osmond felt that she had had enough of it. After all, she’d been hearing the music 15 times a day. It was all getting a bit cloying. Back then, she was happy to see the end of it.
“At the end of last season, we actually considered keeping the Edith Piaf for a second season,” said long-time coach Ravi Walia. “It was successful and she was so comfortable with it.
“But we knew that if she kept it a second year, she would have become really bored with it. She would have had to train it for a whole other year. So she got a new program choreographed. And we decided that after the summer, we’d see how the new program was going and how it was developing. And we’d decide at the end of the summer which program we thought would be a better choice for the season.”

Two days after she returned from the national team camp, Osmond began to toy with the Piaf choreography. She pulled it up on her computer. She didn’t do a full run-through of it until last Thursday. And it was clear what the decision should be. Piaf was like a comfortable old sweater.
“It felt like the best kind of déjà vu, honestly,” she said. “The minute that I turned the music on and went to skate it, it just felt incredible. It brought back so many great memories from last year. I had forgotten how much fun I had doing that.”
Walia said that even though the “Summertime” routine was very good, the team wanted to make sure that Osmond goes to the Olympics with her strongest programs. “We agreed that the Piaf program is the best program she’s ever had,” Walia said. “Many people have said to us that it’s a masterpiece. It’s obvious that we wanted to go to the Olympics with our strongest program. And that was definitely the Edith Piaf program.”
Vipond helped to refresh the new Piaf with some minor changes, some to the step sequence. It won’t look quite the same as last year. And that’s because Osmond isn’t the same as she was last year. “Now when I see her do this program again, I’ve noticed that it’s a lot better,” Walia said. “She skates it way better than before. She’s a better skater, so the program is ever better than it was before.” 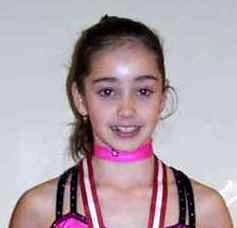 Kaetlyn as a juvenile skater in Newfoundland

Last summer, Walia and Osmond worked diligently on her skating skills. Her technical content is very similar to last year’s routines, but they’ve added more details and polish “so that every movement and every second that she is on the ice, she looks perfect,” Walia said. “We’ve spent a lot of time on that. We really tried to work on the technique of her jumps to make them more technically sound and more consistent.  And the other thing we’ve focused on is her endurance. She’s done a lot of both on-ice and off-ice to help with her stamina.” It will help her on those competitive days when adrenalin makes her give more than usual.
The stamina training will help her with the new Piaf, which is a much faster-paced program that the languid and breezy “Summertime.” “I learned that on the first day, doing it again,” Osmond said. The tempo is indeed more challenging. She’s getting used to it and has skated it cleanly.
“But the character is definitely a lot stronger than “Summertime” and for me this year, that is what I want to feel, knowing exactly what the character of a program is and be able to skate a program that I know I love,” Osmond said. “As much as I love “Summertime” – I honestly loved doing that all summer – I just honestly love this program more.”
So now it’s exciting in her mind. Walia believes that wouldn’t have happened if she hadn’t had a long break from it.  “Now that she just came back to it, it’s feels fresh for her and I think that’s really important.  You can tell if a program is really stale.” It would begin to show up in her performances. But Walia believes she can grow even more in this reborn Piaf. “I think by the Grand Prix, it’s going to be really special,” Walia said.
Costume?  “We were debating if we would change the costume,” Osmond said. “Or change the colour or try to create a new design. But for me, the dress worked really well with program and I couldn’t imagine skating that program with a different dress on. So I’ll be keeping the dress.”

Osmond still can’t quite believe she won a world silver medal but it’s very real. It’s motivated her further. “Worlds was definitely a big confidence booster,” she said. “But last year, everything seemed to fall in place for me. And I was able to compete well at each competition. But there is still a consistency that I want to be able to accomplish. I’ve had a great sense of motivation since worlds. I think it helped me a lot through my summer training to motivate me each morning to get on the ice and focus and skate my absolute best each and every day.”
Walia says Osmond has always been a hard worker, but she’s now very driven for more success. “That’s not an added pressure,” Walia said. “The great thing when people have expectations of you, it’s because you are doing something well.”