A couple of days before Nazareth embarked on its Canadian tour in August, Pete Agnew’s phone jangled in his pocket. It was Dan McCafferty, lead singer for the band for 43 years.

It was 11 a.m. and McCafferty had a special request. “Listen,” he told Agnew, bass player for Nazareth and founder of the group. “We’re doing ‘Sunshine’ again. I wonder if you could stick a harmony up?”

“Aye,” said McCafferty’s best mate. “Where are you?”

McCafferty lives a few minutes away from Agnew near Edinburgh, Scotland and it was another five minutes to a studio that the songbird had booked.

“So when do you want this done?” asked Agnew.

“I’ll be there in five minutes,” Agnew said.

By 1 p.m., Agnew had done the harmonies for an old Nazareth hit – written by the two of them so long ago – presumably for a solo album that McCafferty will hopefully release by the end of this year.

Message to all you guys! We are in Prague working on new wonderful things. New videoclip it's coming, hell ya! 💪 Dan McCafferty is 👑 king#danmccafferty #videoclip #tellme #nazareth #legend #message #newalbum #soloalbum #stayfocus #comingsoon

Nazareth is releasing an album this fall, too, the first one without McCafferty, who had to retire from the band five years ago, suffering from chronic obstructive pulmonary disease (COPD), characterized by increasing breathlessness. The two had separated (only professionally) after a long career together, but on this day, they had joined forces again for the first time in years. It was a poignant two hours. And it’s as if they have never stopped singing side by side.

McCafferty, whose mellow, raspy tones defined the band for years, has already finished his new album, engineered by friends from Prague. And his Prague co-author Kaja Marik LOVED the song “Sunshine.” And just wanted McCafferty to do it again.

“It was quite funny,” Agnew said. “The guy was sitting there and Dan had done his vocal as you usually do. And I was to do the harmonies…The guy said: ‘Do you want to do a run-through? ‘

And so they did. The Czech sat astonished. “This was amazing,” he said. “This was Take One!”

Agnew and McCafferty had the same look on their faces. “Amazing?

“We sung every [flipping] night for 45 years,” Agnew said. “This isn’t amazing. It would have been not amazing if we hadn’t been able to do it. And it didn’t matter. I never sang with him for almost five years. But you remember all the inflections that you did. It just comes like breathing.”

“It was great to record with him again.”

This new McCafferty album is hard for Agnew to describe. The music writer is Czech, and “it’s obviously going to have that kind of feel for it,” Agnew said. McCafferty wrote all the lyrics.

The Czech came in with all the melodies under his belt, and although he speaks English, it’s another thing altogether to write songs in English. McCafferty had to sing what came naturally to him. The “Sunshine” has McCafferty singing to a piano.

Thus, the album is not anything like what McCafferty did with Nazareth, Agnew said. Still, the “Sunshine” crept into their day.

Nazareth is doing a new album, too – the first without McCafferty. Since 2015, Carl Sentance, who sounds a bit like McCafferty, but then, again, not at all, is fronting the band with great energy and crowd contact. There are those who are loath to accept the changes in the band, particularly without McCafferty.

“It had to be a great album, because we didn’t have any wiggle room on this one,” Agnew said. “If this one was going to get panned because your icon had left, and he wasn’t singing anymore, you knew that by god, it had better be good, son. Or you’re definitely going to be buried.” 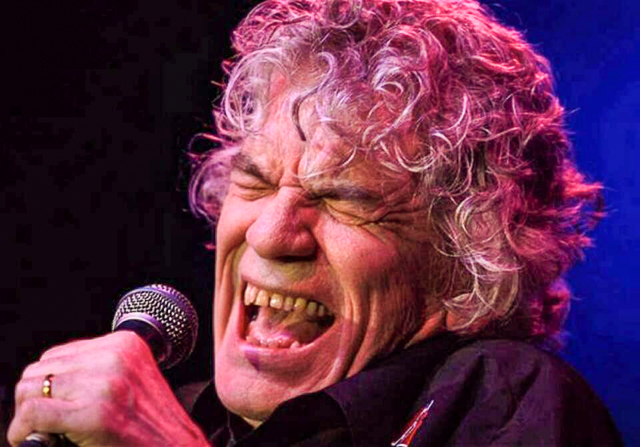 Far from it, Agnew says. It’s not just an album. It seems to be so much more. A few journalists have heard it, but haven’t released reviews on it yet. Agnew says they are raving about it.
“It’s actually one of the best Nazareth albums ever, because the material is just the best, some of the best songs we’ve ever had,” Agnew said. “It’s really really good. We’re looking forward to it coming out.”

It’s a bummer, he said, that the band could not play a couple of songs from the new album during their Canadian tour in August, but “these things, as soon as you play it, by the time you get to the dressing room, it’s on Youtube. And it sounds like shit. It looks like shit and it’s just absolutely god awful.”

People who really know music and care about it will take the Youtube version with a pinch of salt, he said, but a lot of people don’t. “They think that’s what it sounds like,” he said. He saw someone recently standing directly in front of the stage, recording on his cell phone, but that’s precisely the spot with the worst sound, where “you can’t hear anything at all,” Agnew said.

So we will all just have to wait until Oct. 12, while it’s being mastered. All four of the band members wrote tracks for this new album. “With this one, we wanted Carl to be comfortable,” Agnew said. So he wrote five of the songs. It’s his first album with the group. Agnew did three, with one of them being the title track of the album: “Tattooed on my brain.”

Besides, Nazareth never wrote to a formula. “We just couldn’t,” Agnew said. “I couldn’t. I think that’s what’s helped us a lot, because there are some bands that if you’ve heard one album, you’ve heard them all.” Not Nazareth.

At the end of the day, the songs still had to be “Nazareth,” Agnew said. Still, they thought of Sentance while they were writing it. And Sentance is a heavy rocker. “He likes AC/DC and Iron Maidens and Judas Priest,” Agnew said. “All those guys that I never listen to. It’s just not my kind of stuff, but he loves that. He was singing stuff with Nazareth that he has never sung before, so he sings it with a different style. That’s what’s good about it.”

Sentance has given new life to the band since he joined in 2015. “The guy is an exciting stage presence,” Agnew said. “I think the band is ten times more exciting than it has been for the last 25 years. It’s just gone up about 10 rungs. And it’s noticeable with the crowd and their reaction.”

When McCafferty was forced into retirement, Nazareth got dozens of tapes – and these days, videos – most of them doing “Love Hurts.” “Almost everybody was doing a Dan McCafferty impersonation,” Agnew said. “ I remember saying to the boys, we need somebody that is completely different, nothing that is anything close or it’s going to get slammed.”

They tried out fellow Scot Linton Osborne, but it just didn’t work out. “He is trying to fill shoes that no mortal can,” said one fan.

A friend tipped Agnew off on Sentance who had been touring with a classic rock show, doing big theatres. Agnew checked him out on Youtube. “This boy is good,” he thought. “We’ll have to give him a shot.”

When he came to a studio for an audition, Nazareth gave him three or four songs to do, the first being “Silver Dollar Forger,” with which they open their shows. He got half way through the first song, and they stopped him.

“That’s it, fine,” Agnew said. “You’re the man. You’ve got the job. It was obviously exactly what we were looking for. Very very good, but singing in his way. And I think it gave us a different way of looking at the recording as well.”

They had been waiting for a different voice. And just after the new album is released, Nazareth will undertake a rigorous tour of Europe, through Czech Republic, Slovakia, Slovenia, Kazakhstan, Russia, Belarussia, Latvia, Estonia, Lithuania, Poland, Ukraine. “Without crossing any oceans, we can do enough work that we couldn’t back in the old days,” Agnew said.

And they have new stuff for the first time in years. “That’s what anybody is looking forward to, new stuff,” Agnew said. “It makes the whole set much more fun to do. We can’t wait to do that.”