Somehow Nam Nguyen has grown to be 5-foot-11, sometime after that bustling childhood, when as a tiny one, he set all sorts of records: youngest to be pre-juvenile, juvenile, novice, and junior champion of Canada.

Now he’s 21. At 20, he finally began to find his footing in matters other than physical growth, all of which helped him win his second national title last January in Saint John, N.B.

This year? More of the same. But much more.

Like last year, he’s chosen the music of both of his routines for this season. He’s paying for everything in skating, like last year, although he’s given up working at a figure skating boutique when he found himself stretched too thin. “Last year was all about experimenting about what I could physically do,” he said. Now, if he works, it’s as a coach.

During the spring, he landed a spot on the Stars On Ice tour across Canada. He was a natural. He stepped in like crackers were exploding beneath his feet, charming the crowd as if he had done it all of his life, as if he instantly belonged. The experience has stayed with him. “Just performing on almost a nightly basis has helped me learn how to adapt to different situations,” he said. “And also to understand that you have to put 150 per cent into every show. Growing as a skater is thanks to the tour.”

Inside, he has changed too. Part of it has come through his friendship with the effervescent, kind-hearted Alaskan extrovert Keegan Messing. “He’s a character for sure,” Nguyen said. “I love him. He’s such a great guy.”

Nguyen has also sensed a change in his behaviour and the way he communicates with people. “I used to be very closed off with people,” he admitted. “I didn’t like being social with other people.” But this year is different. He now enjoys talking to people, returning the esprit and energy.

He thinks he has learned a lot from Elladj Balde, that charismatic Russian-born Canadian whose only senior gold medal came in the Nebelhorn Trophy years ago and who finished fourth FOUR TIMES at the Canadian championships. For a guy unable to hang his hat on titles, Balde was highly sought around the world for skating shows, his heartstrings on the ice unmatched.

Nguyen spent a couple of days with Balde at his new Skate Global camp, run by he and Liam Firus and who best to expound the virtues of performance art? “He’s really big on positivity and good vibes,” Nguyen said. ”It’s such a great camp.”

At the beginning of the camp, all of the participants were reluctant to speak to each other, all in their own little worlds, eyes down. “But by the end of the camp, everybody was grooving and vibing with each other,” Nguyen said. “It was amazing to see, because I didn’t think a faculty would be able to transform the number of kids that participated and change them completely. And they had them enjoy the sport. Love the sport and bring a side they had never realized in figure skating.

“I don’t know what they did, but he’s incredible and I loved it.” Nguyen said. “The way I portray myself now, I think it is different.”

Just for a joke, he watched an interview he did several years ago at a national training camp. “Man, I was so closed to myself,” Nguyen thought. “I didn’t really like talking about stuff.”

But at the camp, everybody was talking to everybody else, to see how they were doing. Nguyen would never have done that in the past. 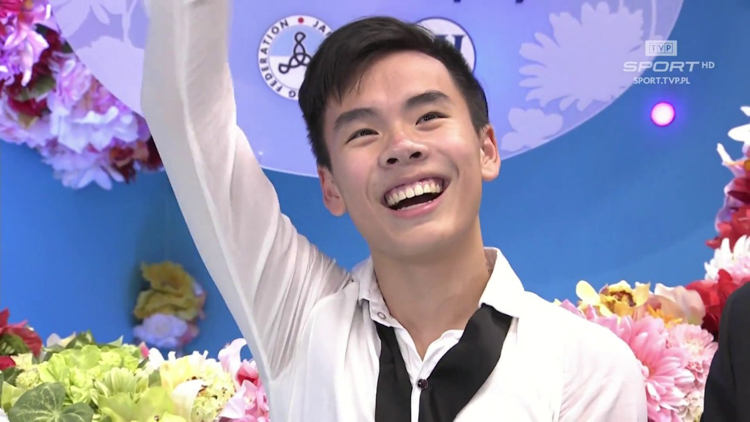 With his successes last season, Nguyen found himself toiling through a never-ending work list. “It was like a big shock,” he said. ”We had prepared for the first half of the season. And made goals and were organized for it.”

But during the busy second half, Nguyen and coach Robert Burk took things day by day. “Whatever they gave me, I just had to go along with it,” Nguyen said. “And it worked out fine. It was definitely long for sure. There were days when I was struggling to keep up with it, due to exhaustion. But we handled it as a team, we kept everything together and focused on our plan for the whole season.”

Last season he competed early and often, hoping to make an impression at home and in the world, too. He wanted to get the momentum started early, “so I could feel settled and keep that for the rest of the season,” he said.

This season, Nguyen finds himself a little late to the party, partly because of the Stars On Ice tour, partly because of boot issues. He was not at all at his peak during the North York Summer Skate in mid-August. He won the short program with a score of 92.34, higher than his personal best (87.57), and his two quads were humming. But in the long, he ran into an unusual problem, and sank to fifth in the free skate, a distant second to Messing overall.

“Something happened in the middle of the program,” he said. “I have this thing: like in training for example, I pull in on such a jump. I have very fast snap with my arms, so my right arm punches my heart.”

If he inhales at the same time that he punches his chest, his heart skips a beat and then the heart rate rises dramatically. “I’d be maintaining a steady 120 beats per minute, and it shot up to 200. Real quick,” he said.

He couldn’t breathe. His entire lower back went numb. His legs went numb, too. When it came to do his footwork in North York, he went through the motions. He was trying to inhale, but it was extremely difficult. “It was just not worth it for me to go extra and injure myself,” he said. “It was just an unfortunate circumstance. It rarely happens.”

And during the summer, he’s been going through a lot of changes with his boots. He hopefully has had it settled since the training camp, where he was performing on boots that were only 24 hours old.

During the summer, he switched to a new brand of skates tagged as the lightest in the market. Vaughan Chipeur, former senior men’s competitor is the technical rep of the company. Nguyen says the boots are really good; you can’t tell when they are on your feet. “When they work, they work,” he said. “My jumps have been working with these boots.” They have been working on the fit.

In the midst of all this, Nguyen has chosen “Blues for Klook” as the music for his short program and a Beatles medley (“Come Together,” “Let it Be,” “Get Back”) for his long. “Both are very fun programs in very different ways,” he said.

It was a successful experiment for him to pick his own music last year. “So why not try again?” Nguyen said. This time it was easier; he already had an idea what he wanted to do, especially in the long.

Actually, originally, Nguyen wanted to skate to Queen – so popular after the Oscar-winning movie – in the long. But Italian skater Matteo Rizzo did so last year. “He did such a great job with it, and I kind of didn’t want to fall in that shadow with him,” Nguyen said. “The way he did that program was just incredible.”

The Beatles’ music had a similar spirit. And Nguyen wanted three iconic pieces. (There are so many.) Kurt Browning, along with Danielle Rose choreographed the piece. Nguyen loves the energy of the program.

For the short, Nguyen is undertaking an iconic jazz piece, well used by top figure skaters of the past. Russian ice dancers Maia Usova and Alexander Zhulin used it for their free dance with which they won the 1993 world title. How could anyone best that performance?

As youngsters, Kaitlin Weaver and Andrew Poje tackled it during the 2007-2008 season, when they finished second at nationals.

Daisuke Takahashi used it for his free skate that helped him take a silver medal at the 2012 world championships. Canadian Liam Firus saw Takahashi – his idol – skate that and had to try this languid, gritty jazz piece, too, to good effect.

Most recently, Wenjing Sui and Cong Han skated to “Blues for Klook” for their short program at the 2017 world championships. Choreographed by Lori Nichol, the routine was a masterpiece.

This time, local choreographer Mary Angela Larmer has created the moves for Nguyen’s “Blue for Klook.” Once an elegant singles skater – Larmer competed for Canada at the world junior championships in 1991 – Larmer took part in the Ice Theatre of New York. And she choreographed the memorable “Run Boy Run” program done by Stephen Gogolev the past couple of seasons.

“Getting into the mood for that program is easy,” Nguyen said. “I get into it quick.” And it earned him the best short program score he has ever had.

Nguyen will show it all off this week at the Nebelhorn Trophy in Obertsdorf, Germany, where he is up against Alexei Bychenko and Daniel Samohinof  Israel. Nguyen will also compete at Skate Canada International in Kelowna, B.C. and Cup of Russia.