You are here: Home / Blog / Moore-Towers, Marinaro in a Virtual World
Tweet
0 Shares 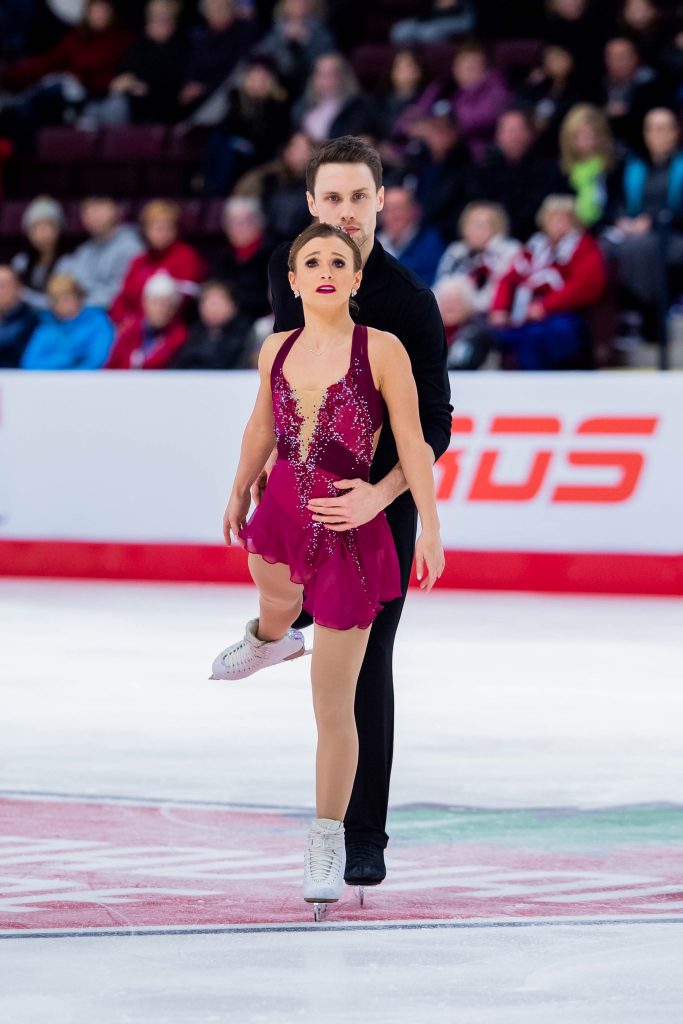 An injury, a pandemic, and all that entails, proved to be the sticky points for two-time Canadian pair champions Kirsten Moore-Towers and Michael Marinaro during a season beyond compare.

COVID-19 scuttled their hopes of competing at the world championships in Montreal last March. Then, during the first wave of the pandemic, Marinaro’s grandmother died of the virus. He had been speaking to her two days before. All had been fine. She had been his biggest fan.

“It’s been a heckuva year for everybody,” said Moore-Towers on a conference call. “For us, no different.”

They were idle for three months, like everybody else. But when they were finally able to get back onto the ice, they had to skate as singles, socially distanced. “It was challenging to us,” she said. “We missed skating with each other. We are pairs. For a reason. We do not thrive in the single skating environment.”

However in September, yet another tribulation. They had been trying to perfect their twist, and change the technique of it, but the landings weren’t always smooth on the risky element. Moore-Towers landed on a shoulder once too many times, and the crash caused a rib on her left side to sublux (go out of alignment.)

“It proved difficult to put back into the correct place,” she said. “And there was nerve damage as a result, which has just been a little bit pesky to get rid of.” Her back overcompensated for the injury. It was so difficult to keep her body stable. She’s on the mend now but recovery took longer than expected.

The injury kept Moore-Towers off the ice during September, October, and even into November. They finally started up the engines again, but the twist was the last move to come back. The twist, of course, was the most risky element for the injury.

They had begun to do the twist again only a couple of days before their Skate Canada Challenge event, which occurred about a month ago.

And here’s another oddity of skating during a pandemic: Moore-Towers and Marinaro have already skated the competition that serves as a qualifying event for the national championships next month (supposedly in Vancouver.) Skate Canada has a video of their performances, but they won’t be judged until the event actually starts today. Virtually. Only after this afternoon will judges deliver scores for what Moore-Towers and Marinaro did so many weeks ago.

Spoiler alert: They didn’t put out the performances they hoped for. “We definitely will be able to show some better stuff at nationals,” Moore-Towers said.

“Being about four weeks past those performances, we are expecting to be 15 to 20 points better than what we are going to show you [today and tomorrow],” Marinaro said.

They are also curious to get feedback for a new lift they displayed in the short program. Yet, without the feedback, they’ve kept training it the way it is for the past month.

“It’s a little bit unorthodox,” Moore-Towers said. “It’s something we have not seen before within the group that is required for the short [Group 3]. We’re curious to see if it counts, which is not a fun place to be.”

The Moore-Towers/Marinaro team have sought the advice of people they trust and who know the rules. “So far, everybody agrees that it should be okay,” Moore-Towers said. “But when you put it in a live event, you just can’t know.

“Because of that, it’s tough to train for four or five weeks after and still not know if it counts or not or if it’s worth it.”

What’s so unusual about the lift? “You’ll find out [today!]” Marinaro said.

The group required in the short program for this season is essentially, a star lift, Moore Towers said. But they are not doing a star lift. “You look at our lift and you roll it out, and it’s certainly not a group 5 and certainly not a group 4,”  Moore-Towers said.  They are in a situation similar to pair skaters Lubov Ilyushechkina and Charlie Bilodeau last season. They did a spectacular lift at the end of their routine, but people didn’t know what to call it. It didn’t fit into a particular category.

Moore-Towers, with a different lift, are in the same boat.

Despite the lack of mileage, Moore-Towers said they are “just super happy” to even be on the ice. “Not everybody in the country has that luxury right now,” she said. “We’re super grateful to the Ontario government that through this second series of lockdowns we are able to still get our training done and still get on the ice.”

Still, they miss the busy competition schedule that gave them structure and an ability to train for it, and taper in a way they know and that their bodies know. They wistfully watched skaters in other countries competing at home-grown Grand Prix events. The Skate Canada International in October was cancelled because of the pandemic.

“It’s hard to watch people doing real events,” Moore-Towers said. “In Russia they are even doing it with an audience, and we’re not saying that’s right, by any means. But it can be difficult to sit back and watch. We’re trying to be present and be grateful for what we do have. And to just take from it what we can.”

Even so, they were surprised that they felt the energy of a real competition during the taping of their Challenge routines – not in front of judges or spectators, but at a home rink. There was another pair with whom they train and some from the Toronto Cricket, Curling and Skating Club, too. They formed a little hub within Skate Ontario.

“There was a little bit of energy there,” Moore Towers said. “Certainly not the same we would feel if we had the help of the audience and the judges standing there right in front of you.”

What was hard, she said, was typically after they step off the ice, they watch replays and assess what happened. They didn’t get the chance this time. There were no replays. “Everything in our programs happens so fast, about an hour after we finished competing, I was asking Mike how certain elements went, because I couldn’t remember,” she said.

It has been 10 months since they competed, finishing third at Four Continents Championships after silver medals at NHK and Skate Canada.

Marinaro admits that it will be nerve-wracking to watch themselves be judged in real time. That’s a first.

“The biggest thing,” he said, “is we’re enjoying every moment we step on the ice and spend together training. We are not taking any of these moments for granted or anything else in our lives for that matter.

“It’s put everything into perspective. We’re definitely trying to stay present and cherish every moment while we can because we don’t have much longer at this. We want to make the most of the next 13 months.”