You are here: Home / Blog / Magic in a Dog Sled
Tweet
0 Shares 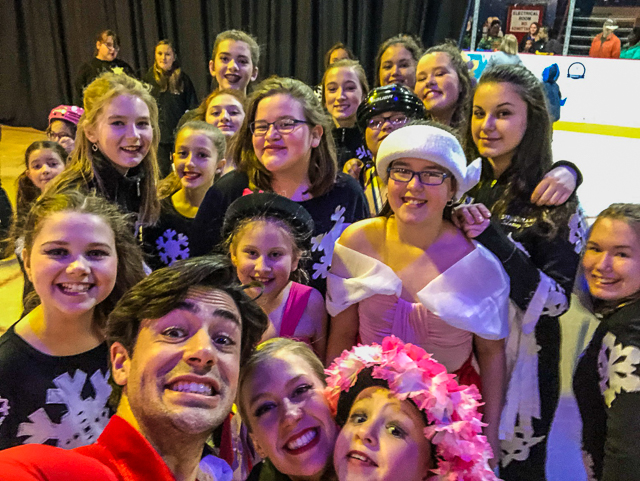 The way Kaitlyn Weaver and Andrew Poje planned it, they would have been happy to remain low-key, and chill out in their hotel in the off-hours during a spring visit to the very northerly Happy Valley-Goose Bay town in Labrador. They had come to Labrador’s largest community in the spring to do three shows and a seminar.

Nothing was ordinary about their time in the twin towns of about 8,000 people, where access is best by air. The former world silver medalist ice dancers expected a fun time with the kids of Happy Valley. But they found so much more.

For the shows, Weaver and Poje pulled out their costumes for their Olympic short dance, yet one more time. For the seminar, they brought their spit and polish.

The kids – “millions of kids,” Weaver said – bubbled into the rink with excitement and wide eyes. They didn’t get to see skaters like Weaver and Poje every day.

And that’s when the Olympians discovered that these budding skaters get 15-minute lessons once a WEEK. (And that’s only during winter.) Because there is only one coach, who also doubles as a school teacher, she just can’t get to every kid.

“It was eye-opening,” Weaver said.

They also can’t afford to go to Halifax to see a Stars On Ice show. The cost of living in the area is very high. Rents are high. The flights are expensive. And they have to fly.

“They were so enthusiastic and so grateful,” Weaver said. From those of wobbly ankles and impish grins, there was wordless bowing to Olympic and world magnificence. “What, us?” Weaver thought. “We’re not that special. But they were just over the moon. That was implanted in our brain.”

They inspired tots to teens. “It was very touching,” Weaver said. “I could have been this kid who couldn’t get the opportunity to move, to train, to get a different coach and I wouldn’t be where I am.”

So Weaver and Poje gave them everything they had that week.

“It really brought us back to what’s important and why we love to skate in the first place because of the joy they had. Just being out there and doing that, was so much fun to be part of,” Poje said. “It was a great life experience. That’s another thing that we really value now more than ever is the life experience, that we bring back to who we are as people and as skaters.”

They found perspective in that tiny northern settlement. The experience left a major imprint on their souls.

Indeed, their entire spring and summer has been about living in all different ways. Weaver and Poje certainly found that in Happy Valley-Goose Bay.

The children weren’t alone in greeting Weaver and Poje with open hearts. So did the local adults.

Out for dinner one night with a local woman, they ended up talking about life. The local mentioned that she had gone out dog sledding and snowmobiling and all the sort of things one does in Happy Valley.

Poje let slip: “I’ve love to go dog sledding.” (Be careful what you wish for out loud.)

Let’s do it TOMORROW!”

The time was set: after one of their shows. “Get in your gear,” Weaver and Poje were told. “Do you have any snow gear?”

They had no gear. Snow blanketed the ground. It was bone cold.

So the locals dug into their closets and clothed them with everything: big deep-treaded boots, hats, coats.

“This is the type of people they were,” Weaver said. “They were just so generous.”

Out in the wilds, their new friends set up the dogs in the sleds. It was a fascinating sight. Winter wonderland everywhere. Happy-faced, eager huskies, blue eyes and all. It was “so cold,” Poje said. It was a buzz, just being out there with the dogs.

Then the chatter started. “Okay, so this is how you stop,” they were told. “And when you steer, you do this…”

“No,” said their teachers. “This is how YOU stop.”

“If you ever have trouble, just let go,” said the local sledder, whose family had been dog sledding for six generations. “The dogs know where to go. We’ll see you out there.”

“Just make sure you don’t tip the sled.”

Weaver sat in the sled. Poje drove. They realized it was a once-in-a-lifetime opportunity. Not to be missed. To be cherished. Frigid wind in their faces. Peaceful valley in the middle of nowhere. Bustling dogs. Sun low in the sky. Gold streaks up past the horizon. The way it had all been for generations. They realized what they were being given. They took it.

Their journey didn’t end with husky heaven. Their hosts were determined to get Weaver and Poje up in a prop plane, too.

The skating club had a little contest and some of the children won a plane ride out of it. Weaver and Poje got to go with them. Did we tell you that the runway at Goose Bay is 11,000 feet long, enough to handle NASA’s Space Shuttle, if it needed an alternate landing site? (It never did.) Goose Bay was built in 1941 as a military air base.

The day of one of the shows, up Weaver and Poje went in a tiny plane, with their knees up against the pilot’s seat. The pilot was the father of one of the students.

Then the plane encountered turbulence. Weaver clutched the window for dear life. “I’m thinking that might have been my last moments on earth,” Weaver said. “But if these kids can do it, I can do it.”

Seriously, she thought they were going to do down at any moment.

Poje had a different take. “It was so much fun, because it was a little turbulent,” he said. “The little girls were just screaming.”

They returned intact. More than intact. And everything became clear to them.

“We’ve learned that figure skating is not the be-all and end-all in life thing,” Weaver said. “It’s just a part of who we are and just a part of what our lives will be. So to do these life experiences gives us perspective to know we can bring that into skating. And then we can leave it there and live the rest of our lives.

“I think that takes so much stress out of it. And we are able to work harder and create better things of it anyway.”

At this moment, before the Stars on Ice tour, they had been asked to be part of the ThankyouCanadatour, and they had said no, preferring to chug along in competitive mode.

But their experience in Happy Valley tipped the balance for them in favour of setting aside the Grand Prix season in favour of the tour. So when you see them going from small town to small town on the tour across Canada, Weaver and Poje will be skating with Happy Valley-Goose Bay in their hearts. Yes, the tiny town had made a huge impact.