It was dreamy, the way Lubov Ilyushechkina and Charlie Bilodeau swept about the Espoo ice, her hair back in a whiff, picked up by the wind, his body movement curving around a French Canadian tune.

Together seven months, they could not stop smiling. There was shine on Ilyushechkina’s costumes, but more on her face. This was a second chance for both.

They finished with a bronze medal at that event, the Finlandia Trophy, after finishing second in the free skate – their first competition as a pair team. It was a stunning start.

Both had been out for the past year, and who knows if for good? Bilodeau had split with partner Julienne Seguin after they had won Junior Grand Prix Final gold, and silver at the world junior championships. Then they stepped right up to senior and won Skate America in 2016 with their expressive style. They followed that with a national silver medal in 2018 that led to them finishing ninth at the Pyeongchang Olympics.

After winning the world junior title with Russian partner Nodari Maisuradze in 2009 and Skate Canada in 2010, Ilyushechkina switched countries to skate with Dylan Moscovitch, with whom she finished sixth at the 2017 world championships. But Moscovitch retired after the 2018 season.

Footloose, Ilyushechkina joined up with Cirque du Soleil, making good use of her daring spirit and her flexible body. “After I finished skating with Dylan, I didn’t feel that I’m ready to stop skating myself,” she said. “And I wanted to finish on a higher note. I was thinking of looking for a different partner, which originally was not a plan. But I decided that I wanted to.

She looked for another pair partner, but it just didn’t happen by the start of last season. And at the same time, Cirque du Soleil managers had contacted her directly. That was pleasing. And by this time, since all of the international assignments were already out, Ilyushechkina (sharpening my pencil to learn how to spell that name again) signed the contract and toured for eight months from June until February, 2019.

As for Bilodeau, he wasn’t so sure whether he would continue to skate again at all. He decided he needed two months away from the skating world altogether “to make sure that I’m there for the good reason and that I still really want to do that.”

Eventually, he decided he still had the energy to do it and he wanted to reach higher goals. “So okay, which would be the best partner I could have?” he pondered.

One day, Ilyushechkina got a message from Bilodeau via Facebook. They started talking. At first, Bilodeau thought he would try out with some other skaters as well. He and the tiny Ilyushechkina arranged a tryout in Toronto. In short, it went well.

“The first time we skated together, we grabbed the hand and went to skate and do elements. And we were just feeling each other,” Bilodeau said. “I feel we have the same natural way to move.”

“We naturally go the same direction, we naturally set the same curve,” Ilyushechkina said. “It was a big sign for me when we did a tryout the first time in Toronto. I really really enjoyed it. For me it was kind of a brainstorm. What do I want to do right now? When I moved to the circus, I really made a conscious effort to look at figure skating more from the performance perspective. And I did a tryout, and I still felt that feeling that I’m wanting to compete again.”

After that first tryout, Bilodeau felt that he really didn’t need to do a tryout with anyone else, that Ilyushechkina was everything he wanted in a partner. After the first trial, “my mind was clear,” he said.

They decided to do a second trial in Montreal, just to make sure the idea of getting together was solid and valid. That week, Ilyushechkina knew that she needed to pack her things from her Toronto base and move to Montreal where Bilodeau trained and lived.

She went back to Cirque du Soleil and finished her contract. And then their competitive life began anew. 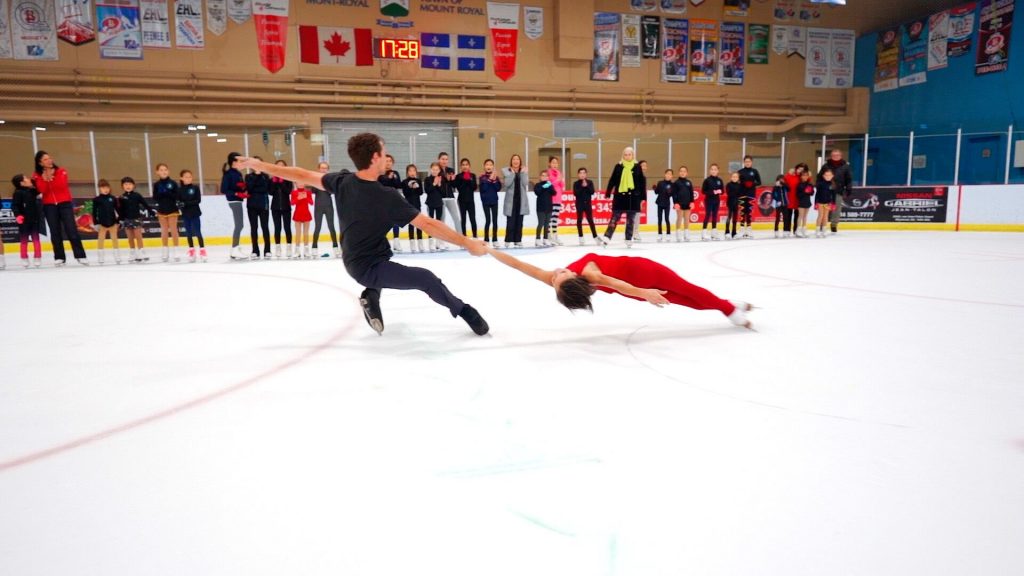 Their personalities are different. Their taste in music is different. But they get along well. They are so similar on ice. Off the ice, they hang out sometimes, and invite each other to events.

“Yes, our personalities are different, but we are comfortable [together,]” Bilodeau said. “Like the first time we did the tryout together, like the first two minutes, we already see we have the same natural way of moving on the ice and the same pattern. And there was something really special.

“I think that what we are doing right now on the ice and getting back to competition at that level is only possible from that perspective with Lubov. Every day in training, we have the same goals. We have high expectations. We know whatever happen on the ice in competition or training, the end goal is the same. With this in mind, we work really easily every day in training.”

With the forging of this new partnership, they have not gone to coaches that either of them had used before, but to Richard Gauthier, an experienced and successful producer of top pairs. They have both also gone from skating schools with very few pairs to a school that has eight or nine teams, not all of which practice at the same time. Ilyushechkina and Bilodeau now have to manage their time. And figure out how to mash their skills together.

“Since early on, everything has been quite easy,” Bilodeau said. “In the throws, we had a few details that we were doing differently. So what do we keep from what I was doing and what from what she was doing, and put this together. And we go. So really, it’s easy.”

A team coming together, getting ready to compete? There is a lot to put together. Late in the game, they started to finally work on triple twists. “There’s a point where we have to work on so many things,” Bilodeau said. “We didn’t have the time to start doing triple twist, but then we started [late August] and okay, we did it.”

They got a level two difficulty on their triple twist in the short program and level one in the free, as Ilyushechkina stepped out of it. The bronze medal, only a point away from a silver, was a bonus.

“I think it confirms we are on the right track with our strategies so far,” Ilyushechkina said. “And of course, we are taking some notes where we can improve and pay attention so we can improve going into Skate Canada, and hopefully finish at a higher level.” Skate Canada International is in Kelwona, B.C. from Oct. 25 to 27.

At the training camp, Ilyushechkina promised something in a program that would remind everyone she had been a Cirque du Soleil performer. And in Finlandia, there it was, a most formidable lift, right at the end of their free skate, in which Ilyushechkina climbs up into a lift into a handstand, facing backwards, at first with bent knee, then with ankles crossed, then in a split position. And all the while, Bilodeau is turning, at first one way, then another. It is astonishing.

“There is a circus aspect to it,” Ilyushechkina said. “We tried a few things on ice. We developed this together, according to the rules and levels. We tried different versions of it, turning all the way, doing different things in the air, but what we have right now is the best thing.”

“We really think it was worth it to put that lift right at the end of the program, to end on a big note and make people stand up from their bench,” Bilodeau said. It works.

The most encouraging part of getting out their programs for the first time at Finlandia is that they were able to do in competition what they do at home at practice regularly in a context where there are so many things they cannot control: stress with other skaters, judges, being in another country. Ilyushechkina has benefitted from her time with Cirque du Soleil. “I’m very thankful for the constant change in environment,” she said. “I feel I am less reactive to change. When you go to competition, you want everything to line up perfectly, and then something happens. But now I am thankful that I have that experience travel-wise. I’m more resilient and easy to adapt.”

The short program was more successful than the long at Finlandia, but Bilodeau said the free skate was fresher. They created the short program first and had already been working on it for a couple of months before they competed at Finlandia. They did not compete the free at the Quebec Summer Skate, because it just wasn’t ready, but got it humming well enough for monitoring at the national team training camp at the end of August.

The programs have different energies, Bilodeau said. Both were created by ice dancers: Marie-France Dubreuil and world champion Guillaume Cizeron. “When they are both together, they try things, and then they try things with us, and then we partner with each other,” Ilyushechkina said. “It was a new experience to try things with a dancer. Guillaume is so much in control, all the little piece of curve. Just a good dancer.” 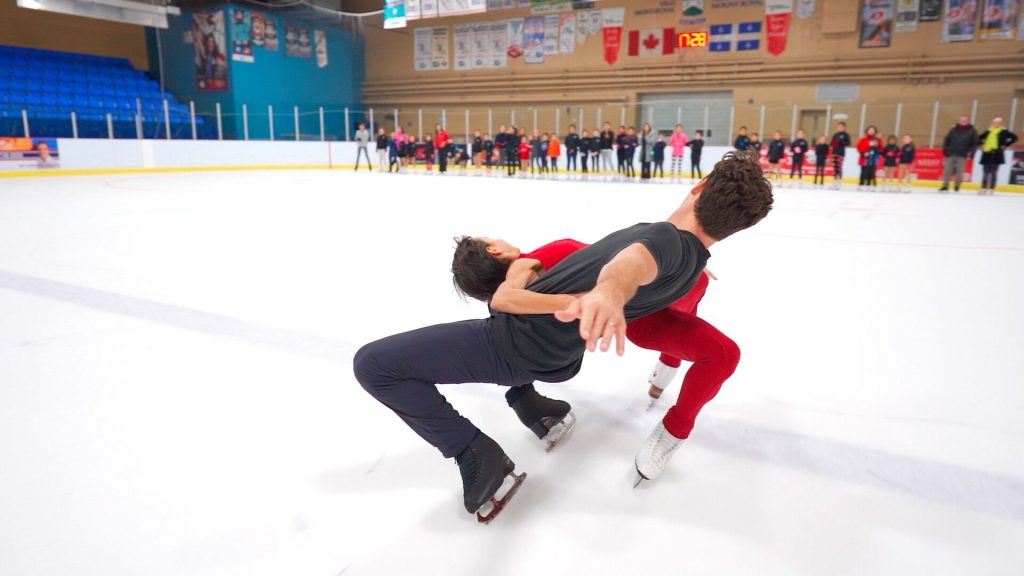 Their short program is to “My Funny Valentine” while the long is a song created and sung by a stalwart French Canadian Michel Rivard: “Je voudrais voir la mer.” It’s a dreamy thing, too. Ilyushechkina is dressed in seafoam green as Rivard warbles and looks like the ocean. Their first moves are a weaving in and out, like waves marching against the sand.

And its silver beaches

And its white cliffs

Proud in the wind

And its moon birds

And its fog horses

And its flying fish.”

…I live in a bubble

In the middle of the city

Sometimes my heart is gray

And behind the window

…So from the bottom of the sea

As strong as the storm.

…And the ocean is calling me

In a velvet voice

And draws in my body

Swell with the sun.”

It is, says Bilodeau, the perfect song for the world championships, to be held in Montreal in March. Whatever happens, wherever they finish throughout the year, whatever scores they get, their prime goal is to be in that event, flying Rivard’s flag at home. And they are coming home, to the ice.