It was magical. A day at little Clinton Raceway – Legends Day to be exact – brought me to my roots. (Racing came before figure skating.) In my neck of the woods, it was what you did. I know of folk in my hometown who kept horses in the back yard – within the town limits. From all of this, Canadian harness racing drivers and trainers sprouted forth, and ruled the world.
And they all showed up at Clinton Raceway at Legends Day, a crazy phenomenon that works. The best drivers on the continent get together in this little town of 3,200, a far drive into Ontario’s farm country. It’s quite a hike from Toronto, but just a short hop  from my hometown. It’s home to me.
On Legends Day, fans came from all over to flood a corner of Clinton at a bright little well organized track that races only once a week during the summer. (Twelve busloads, to be sure.) They came primarily to see two stars of the sport, John Campbell and Bill O’Donnell drive the final races of their careers. T-shirts were sold in Campbell`s maroon colours. Bidders could try to land some John Campbell bobblehead dolls. 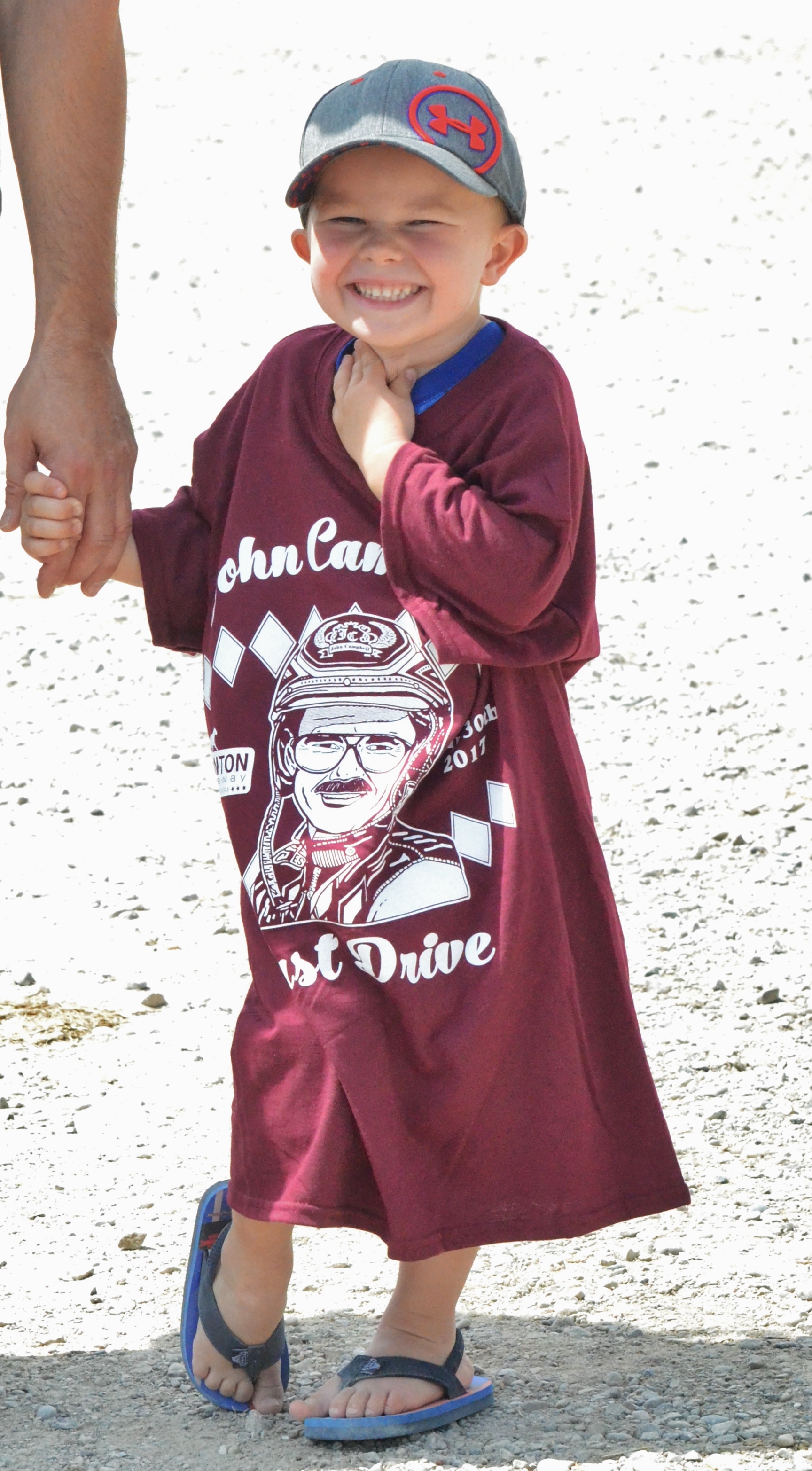 A young fan at Clinton (All photos by Beverley Smith)

In truth, the eight drivers (Campbell, O’Donnell, Ron Waples, Steve Condren, Doug Brown, Michel Lachance, Dave Miller, and Dave Wall) have earned a total of $1.15-billion and 69,000 races between them. They are not small fry in this small town. 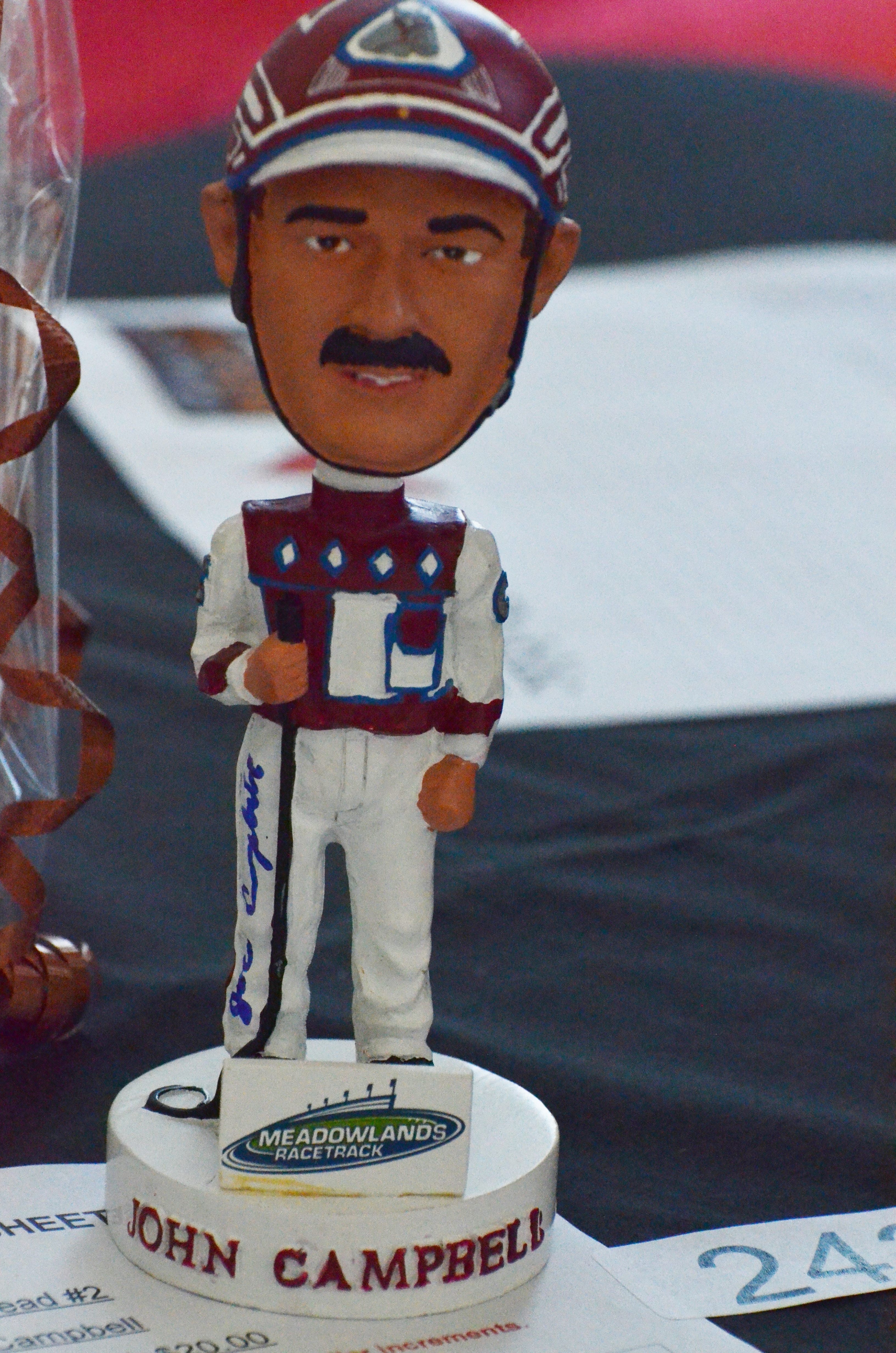 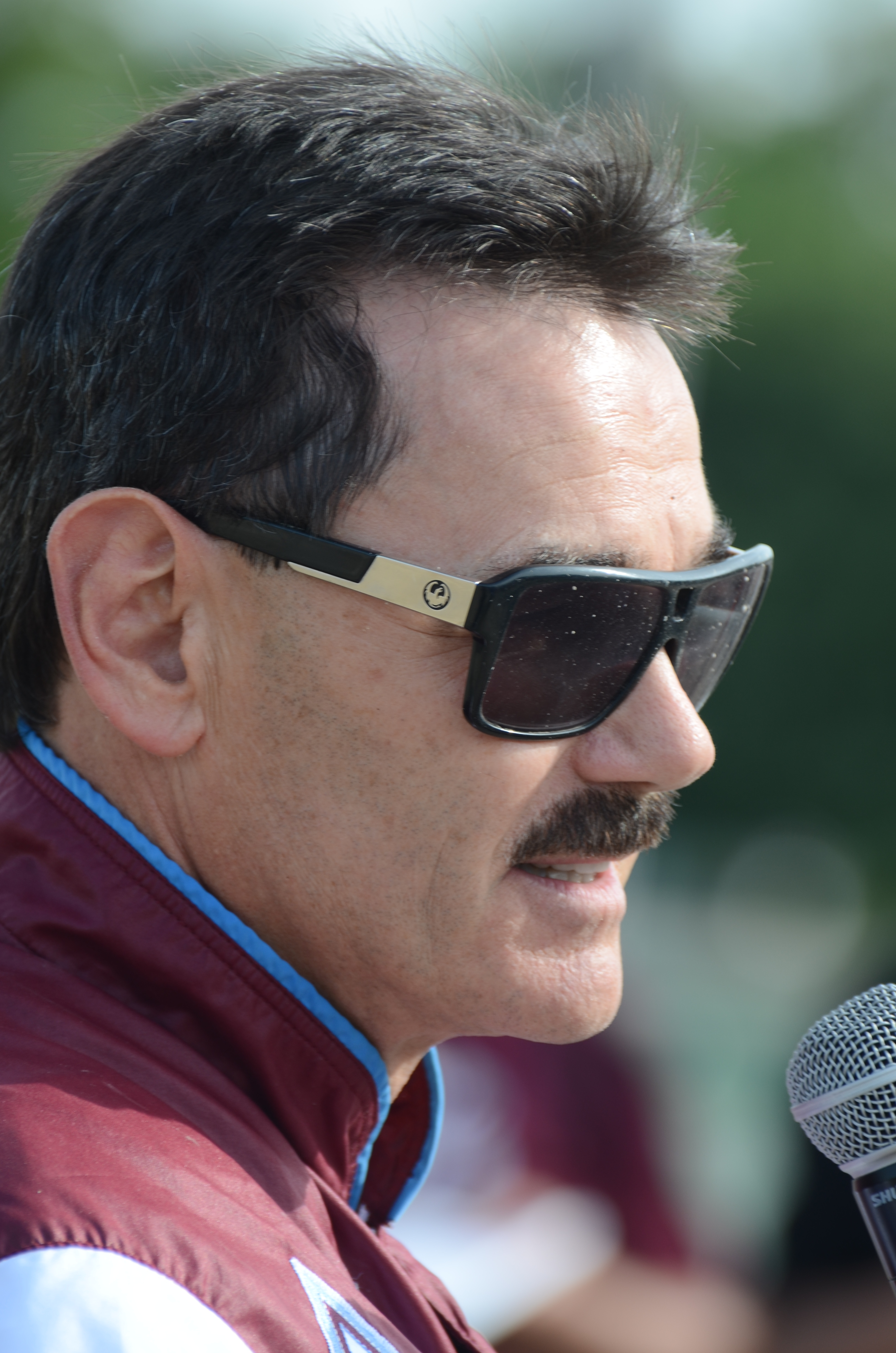 The man himself. He never ages. He looked exactly like this 25-30 years ago.

Yet, they all come to Clinton for this biennial event. The most recent convert, American Dave Miller, dropped everything when Campbell asked him if he wanted to be part of the day. Miller has won 12,180 races and horses he has driven have earned $215-million so far in his career. Miller was the junior of the group at age 52. 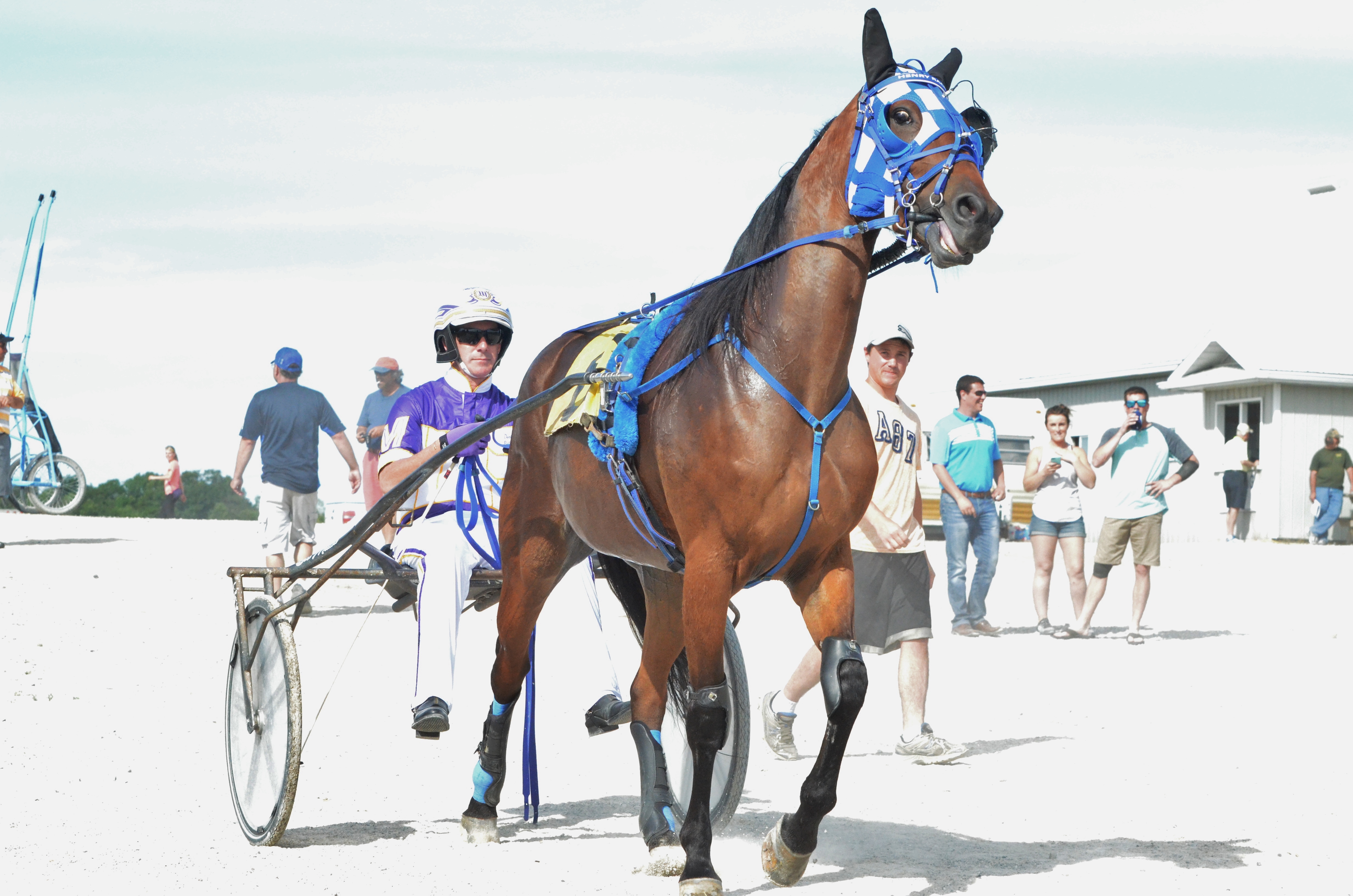 Campbell, 62, retired from driving about a month ago with 10,668 wins (Standardbred Canada has him at 11,058 wins) and $303-million in life earnings, well ahead of the competition. He’s won seven Meadowlands Paces, six Hambletonians and six North America Cups, all races with purses of $1-million. He’s known as a class act, an ambassador of the sport.
O’Donnell, the best tale spinner in the business, drove against Campbell for years at The Meadowlands in New Jersey, a harness racing mecca where he had a nearby locker. And folks dubbed him `The Magic Man` for his driving abilities, for always getting more out of a horse than you would expect.  He`s 69 now, but has chalked up 5,743 wins and $99-million in earnings. But this was to be his last, too. 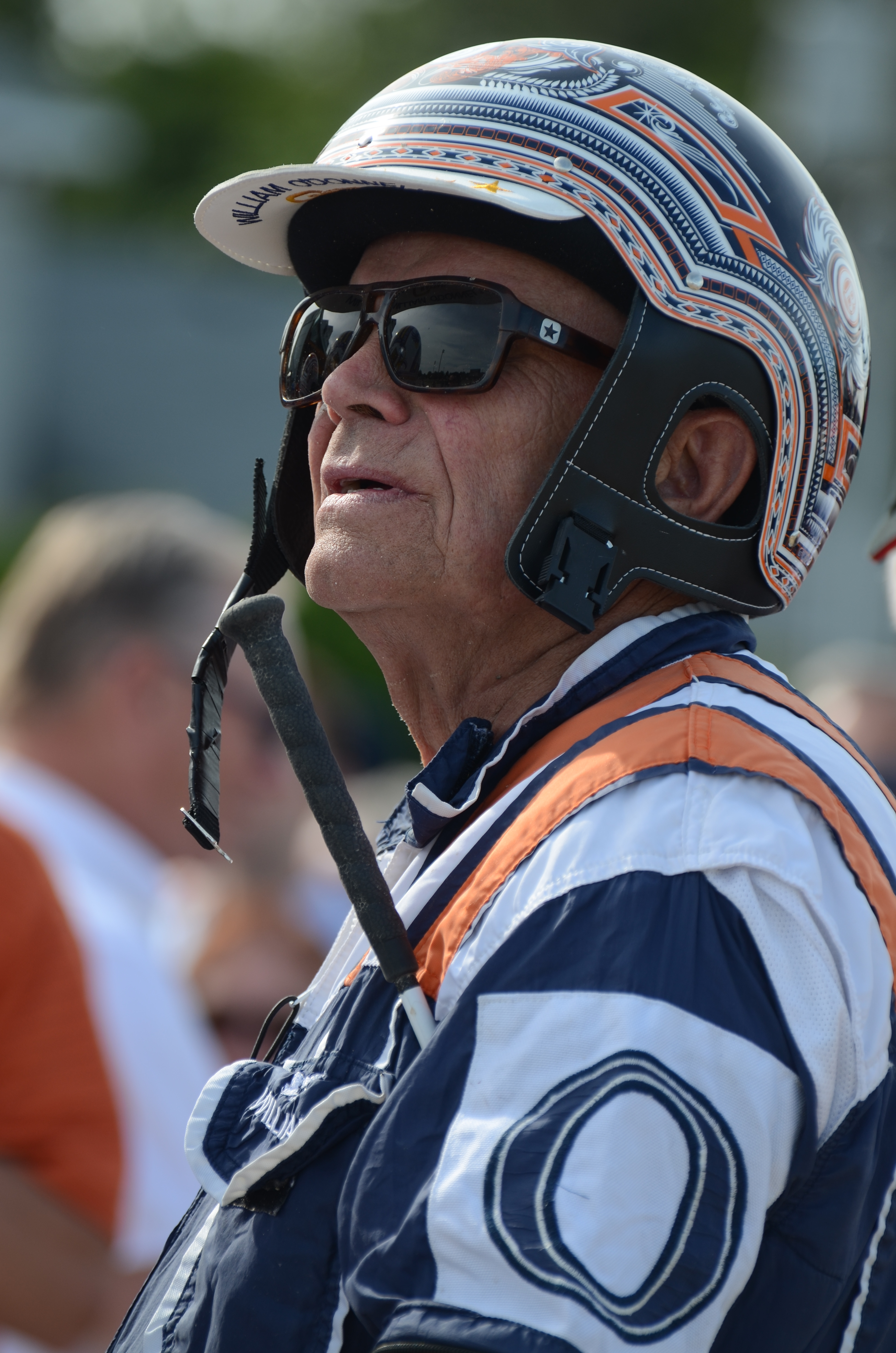 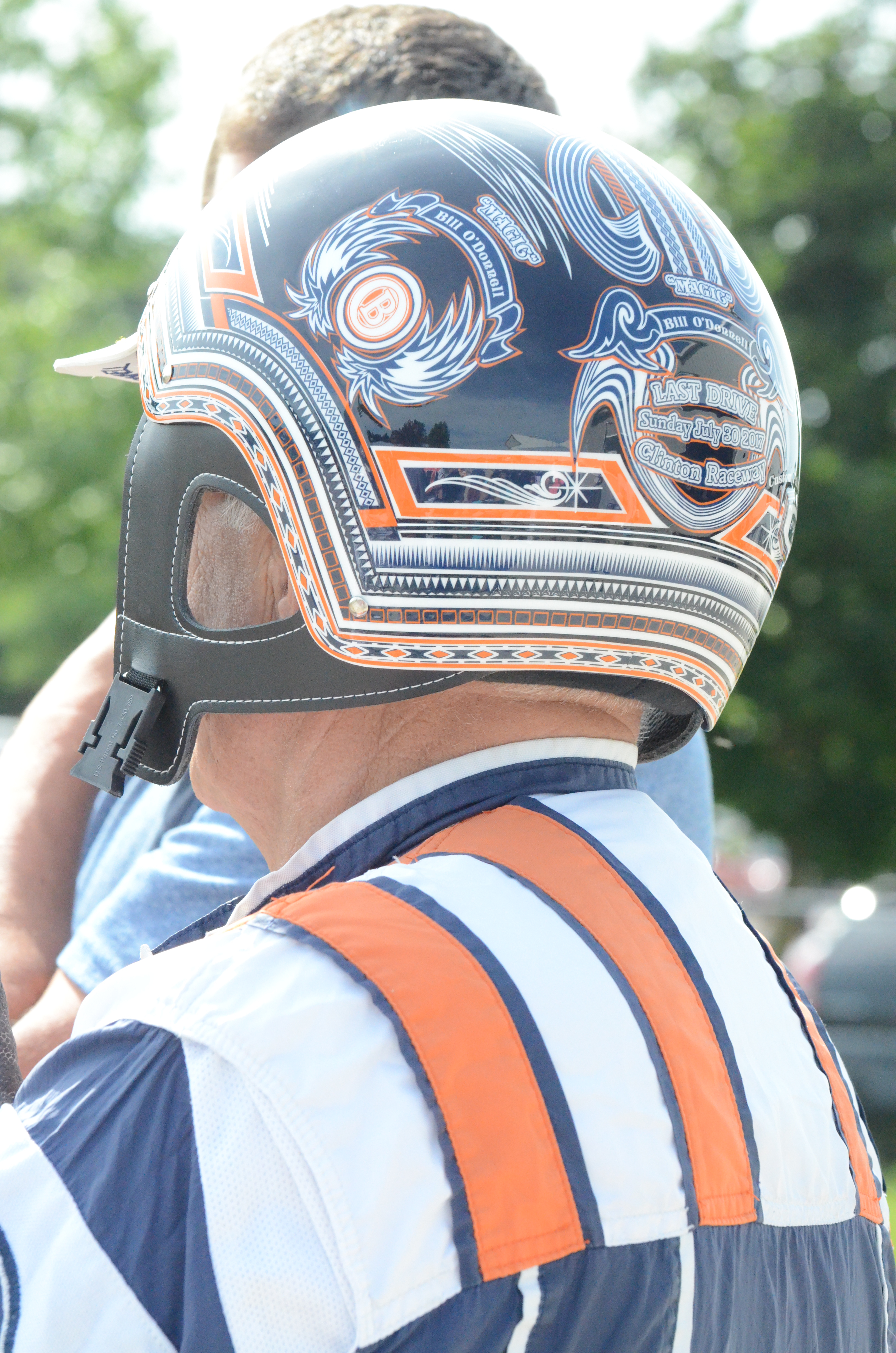 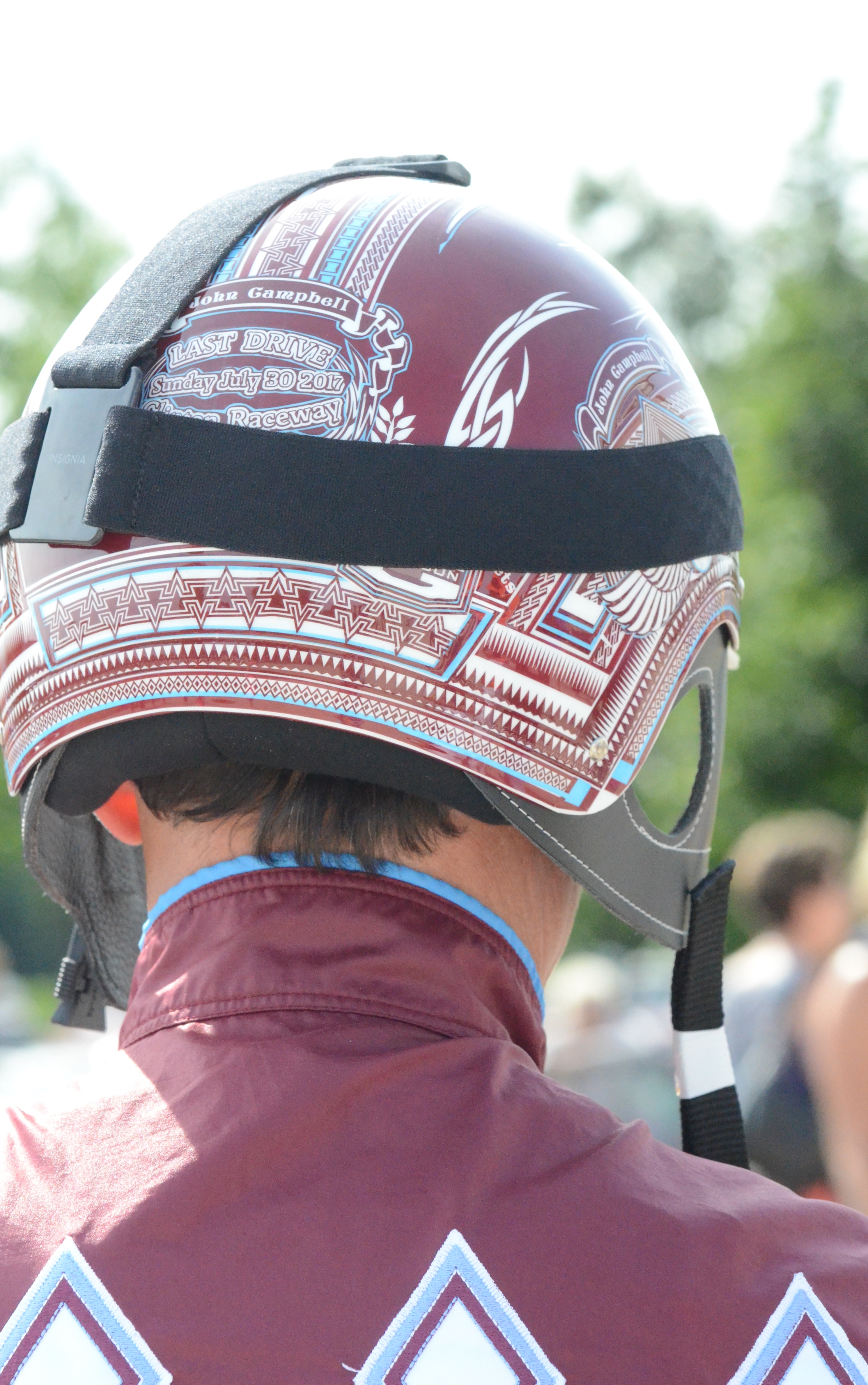 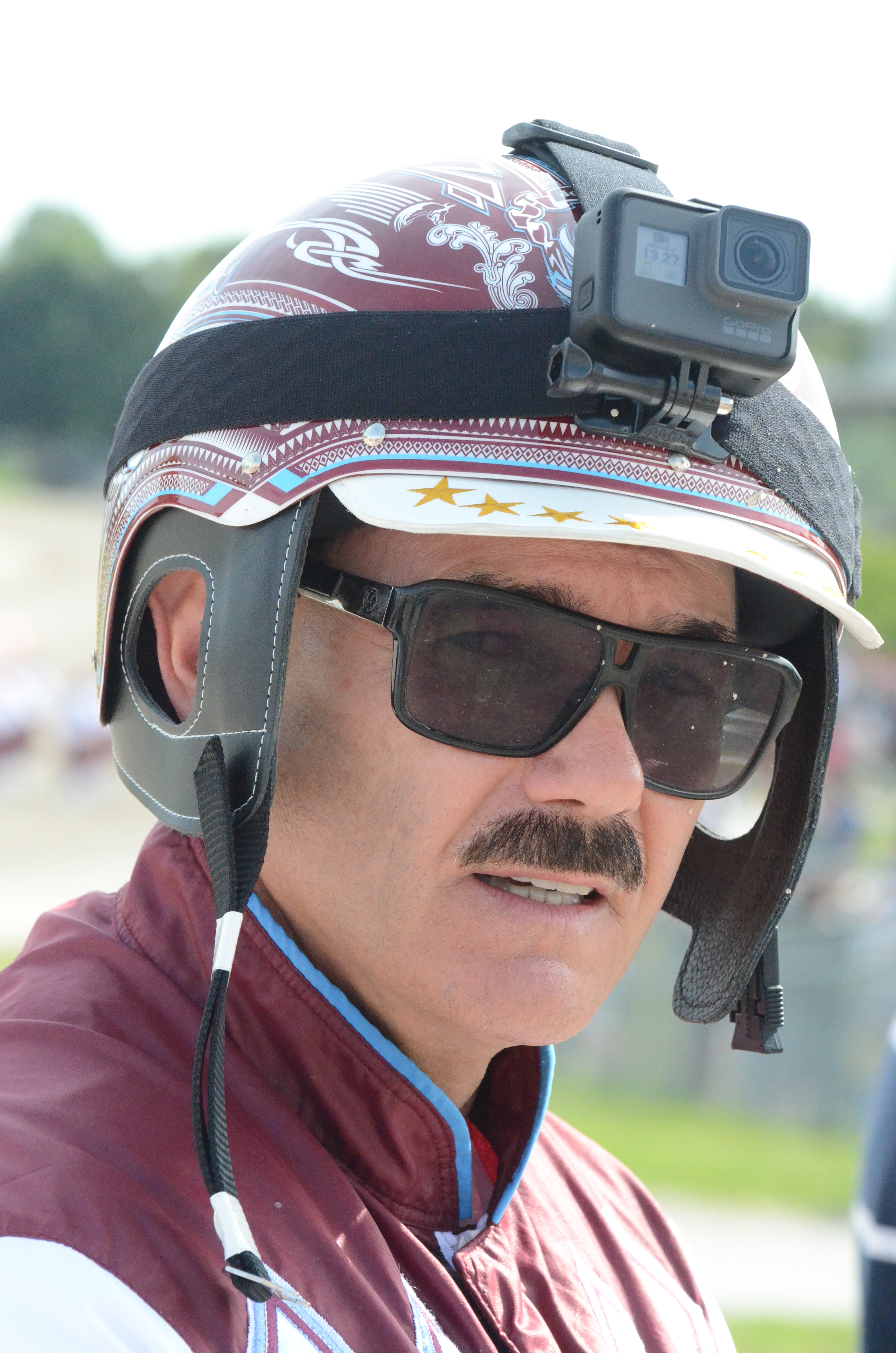 Both O’Donnell and Campbell wore specially painted helmets. Campbell wore a camera.
The place was packed. People in little towns an hour away knew about Legends Day and the final drives of a lifetime. A lineup for autographs seekers snaked around to the front of the grandstand. The history in that lone lineup of drivers who scribbled their names could fill books. 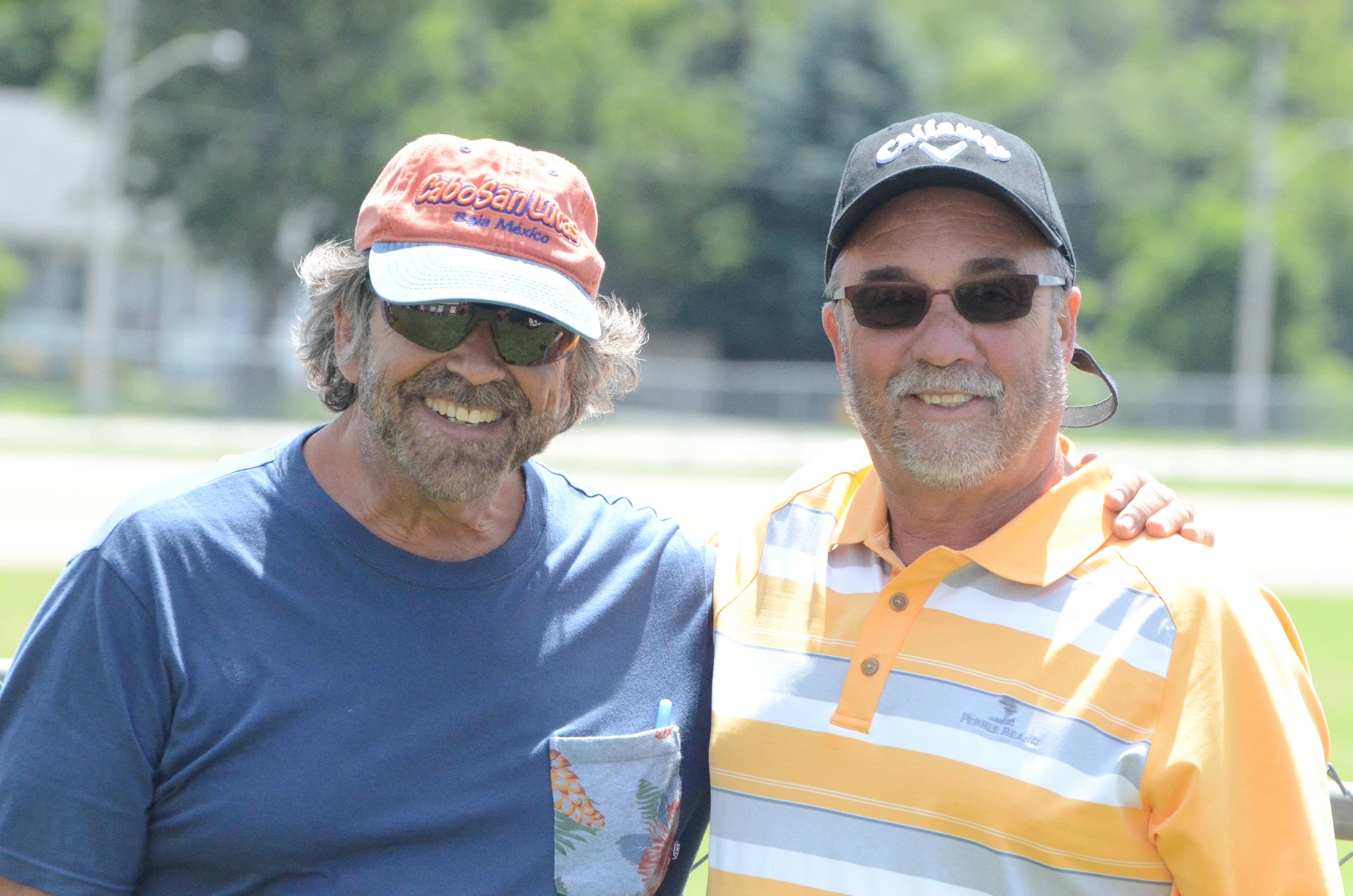 The man on the left is from California. The one on the right is from Ohio. They came to see Campbell and the rest.

Added to the group – but not driving in the $15,0000 Legends Day Trot – was 71-year-old Bud Fritz, a taciturn local from nearby Walkerton, Ont., who could drive with the best of them, having won a North America Cup with his Apaches Fame. He`s the man who guided trotter A Worthy Lad to 30 consecutive wins. 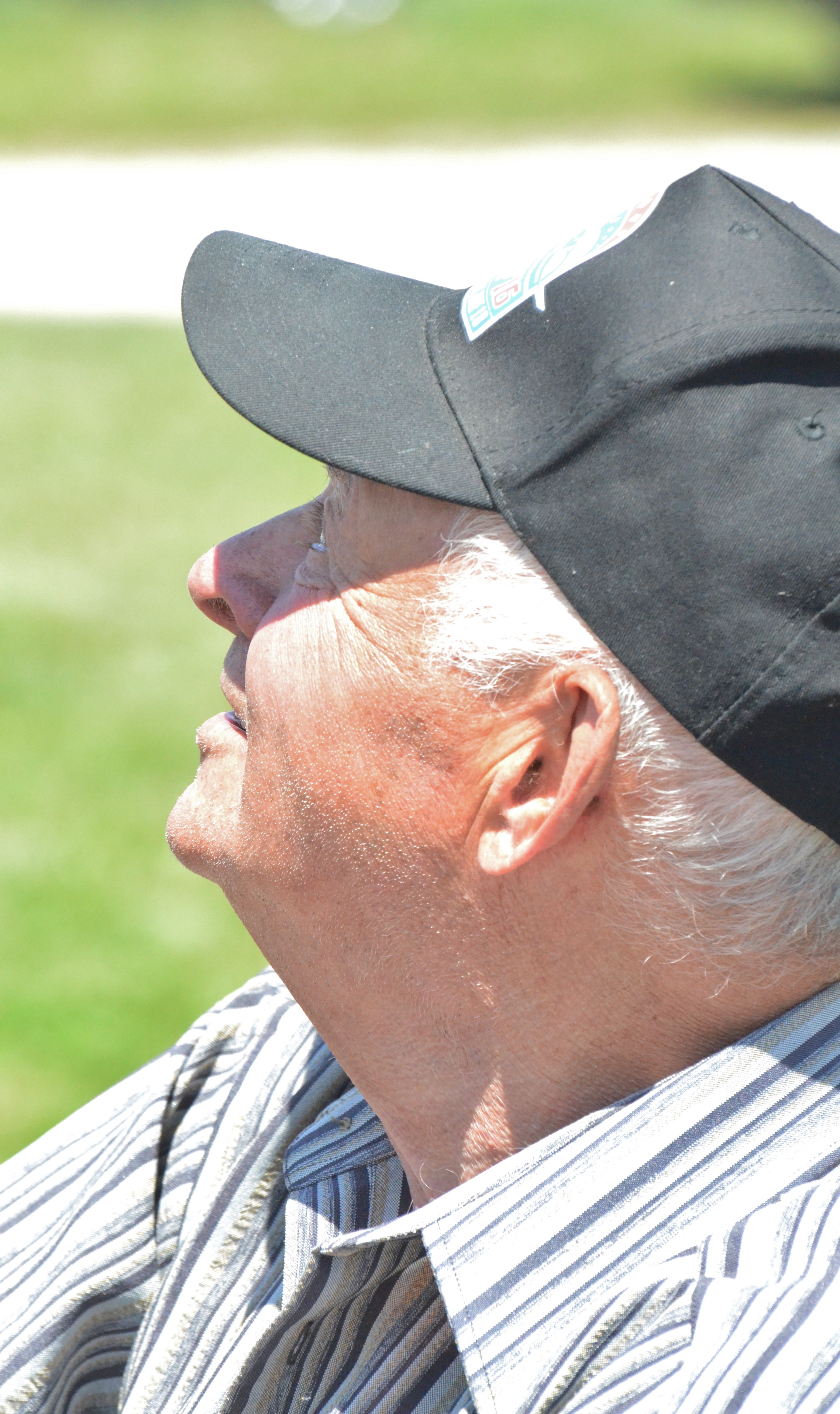 Bud Fritz. Clinton and Walkerton, Fritz’s hometown, are both in the snowbelt of Ontario. Fritz used to say: “If it’s snowing so hard, you can’t see the horse’s ears, we won’t go out. That is about all that stops us.”

Nearby was Keith Waples, considered a class above all of the best. Nobody really knows how many races he has won. In his early days, nobody kept tabs. All of the best bow to him. He`s 93. 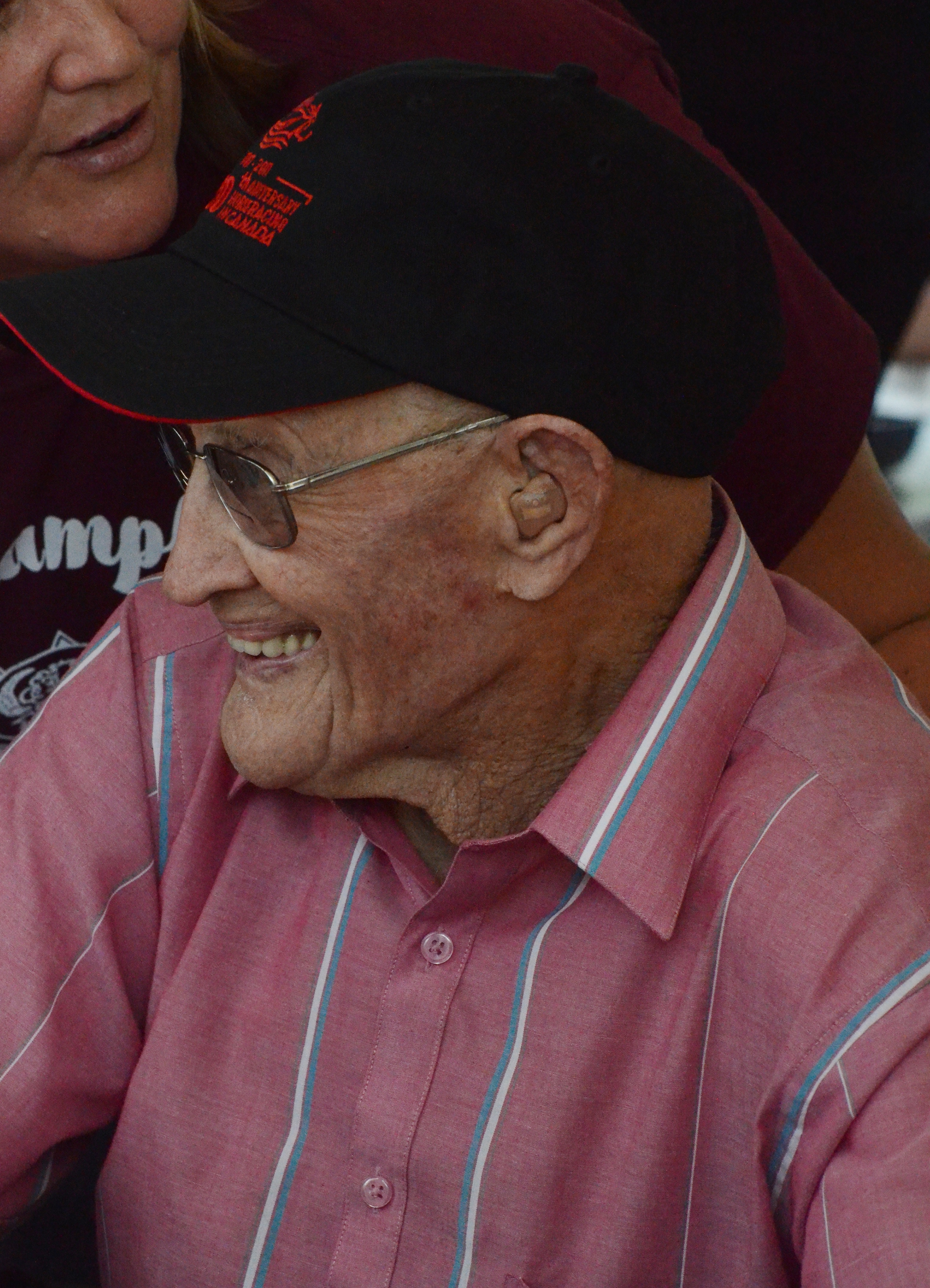 Keith Waples
The whole event was like a huge family reunion, of a sport that has changed so much, remembering what used to be. This was my first Legends Day. One thing I know for sure: I will never miss another one. 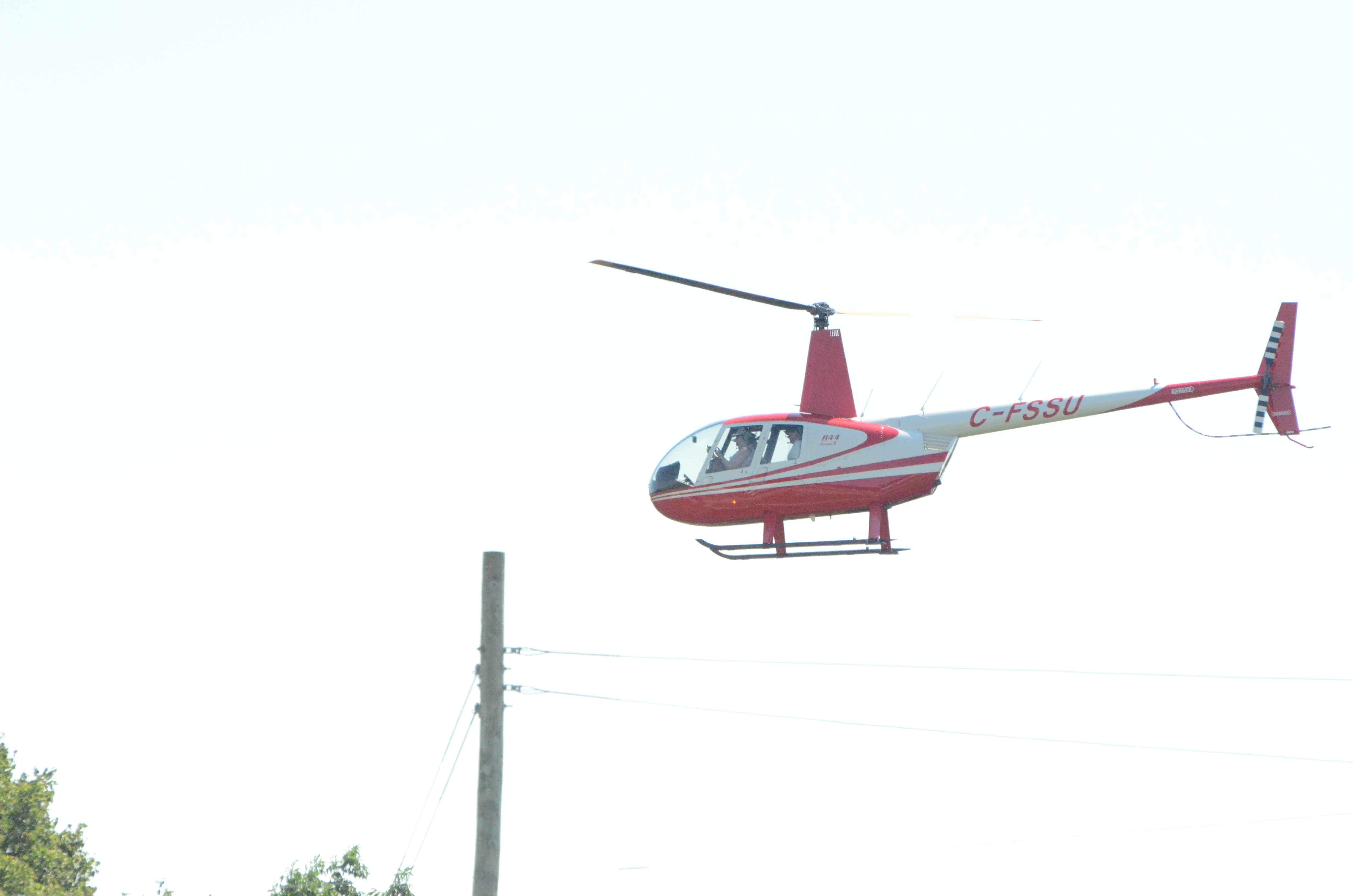 Marv Chantler flew in by helicopter for Legends Day. 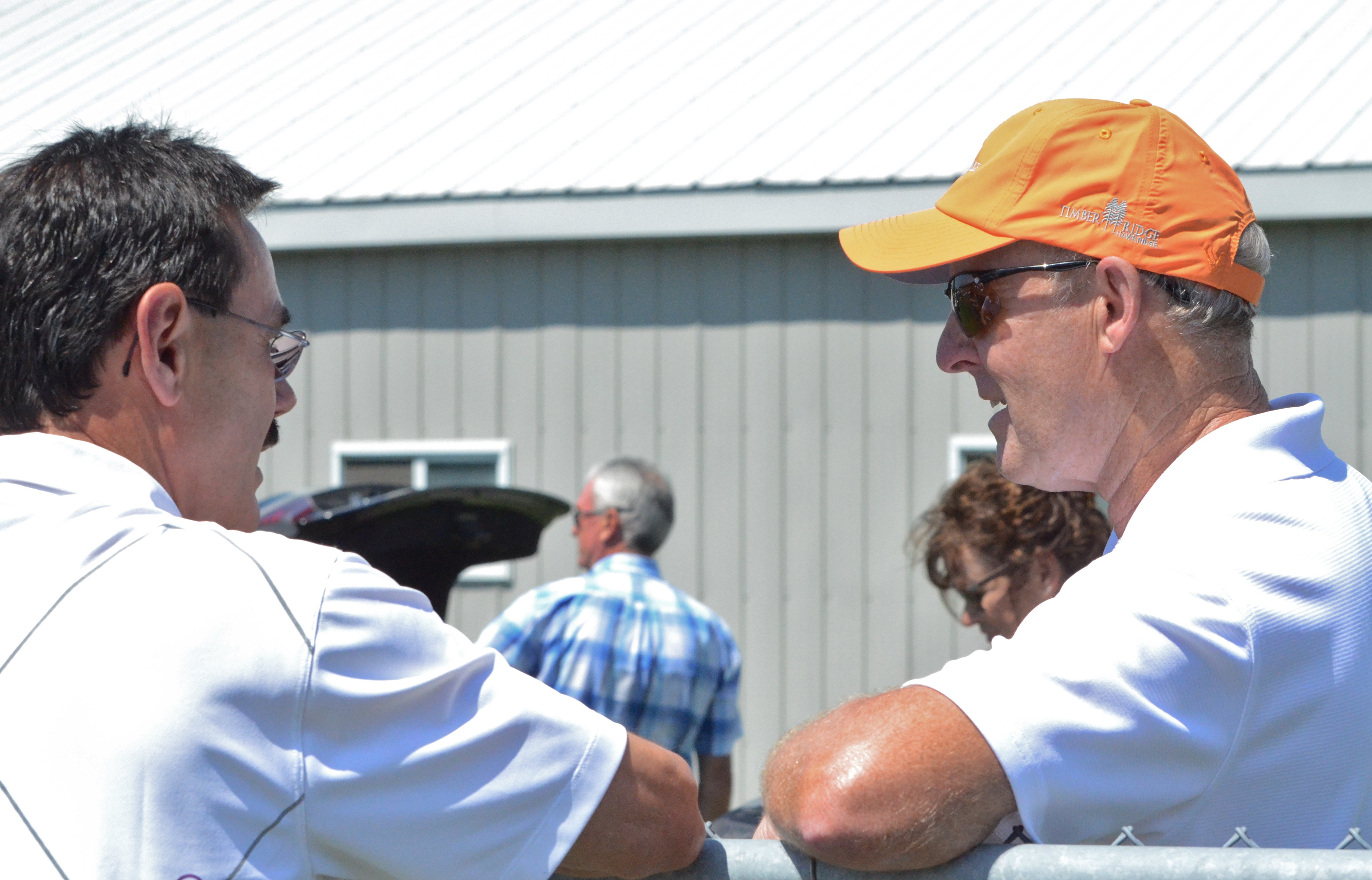 Campbell chats with Gord Waples, another member of the storied Waples clan. 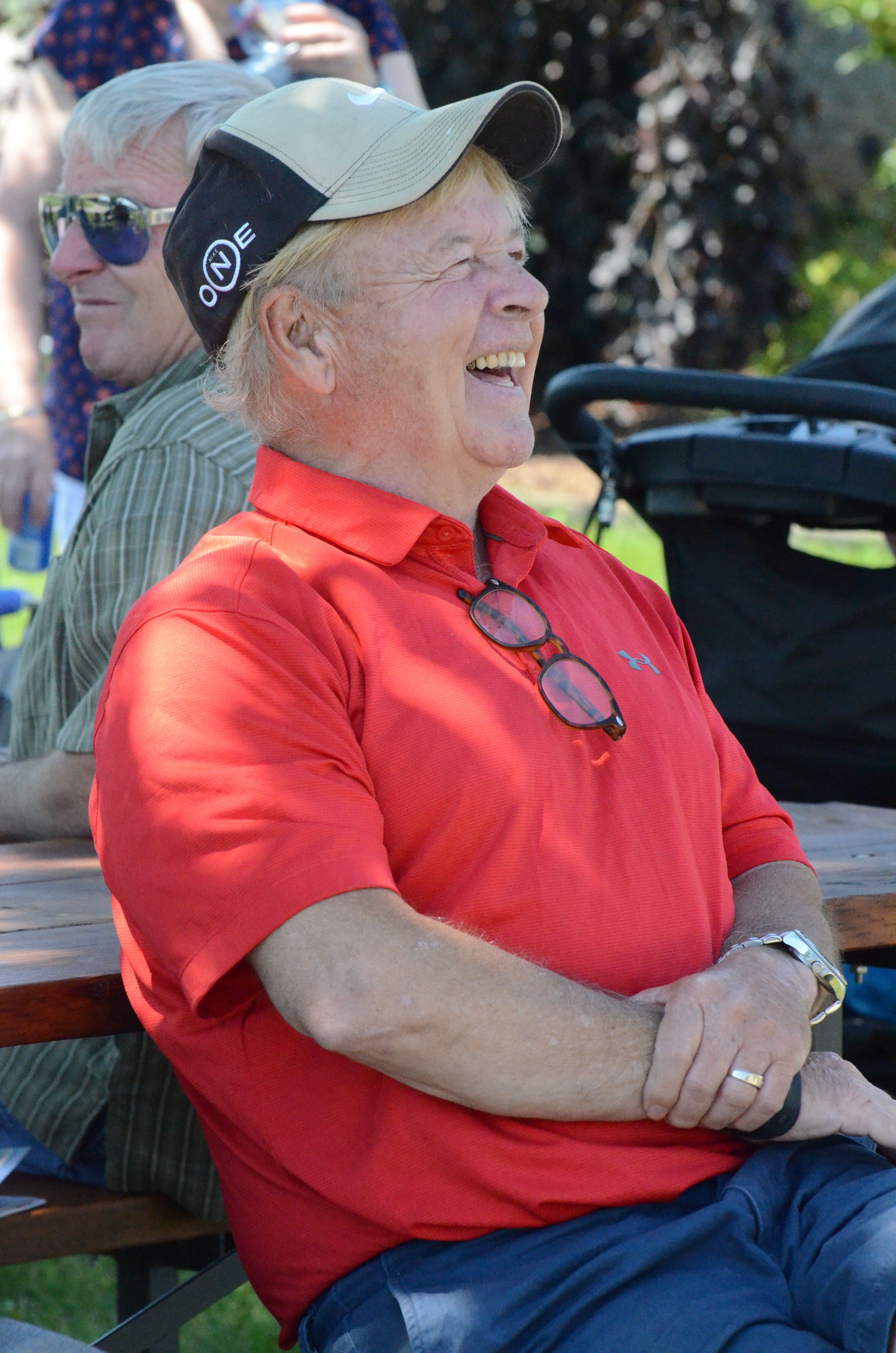 Dave Wall was born in the same Kincardine hospital that I was and I’ve known him since he got his driver’s licence. He’s now 70. Still driving. 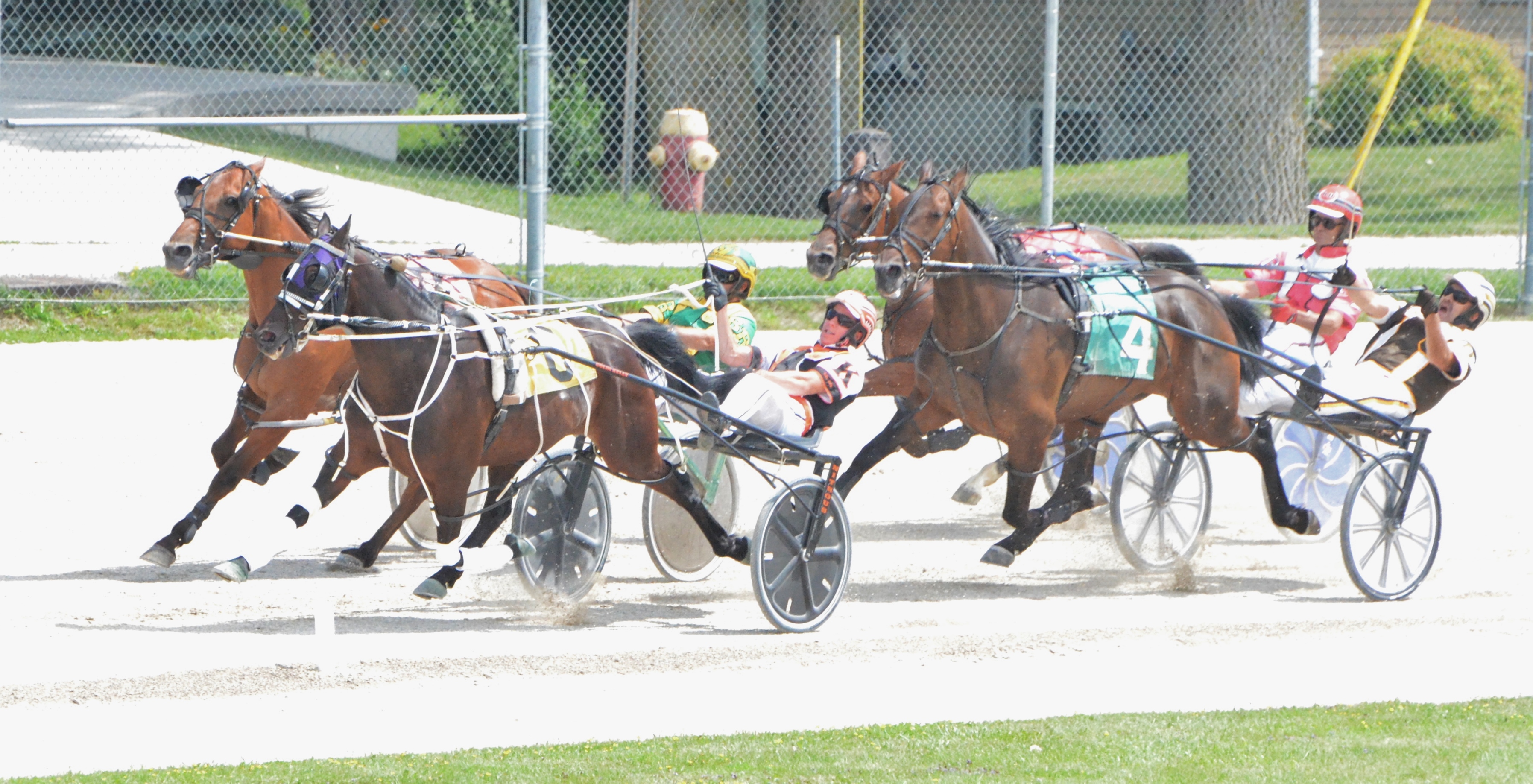 An earlier race at Clinton Raceway. Competitive, despite the small purse. 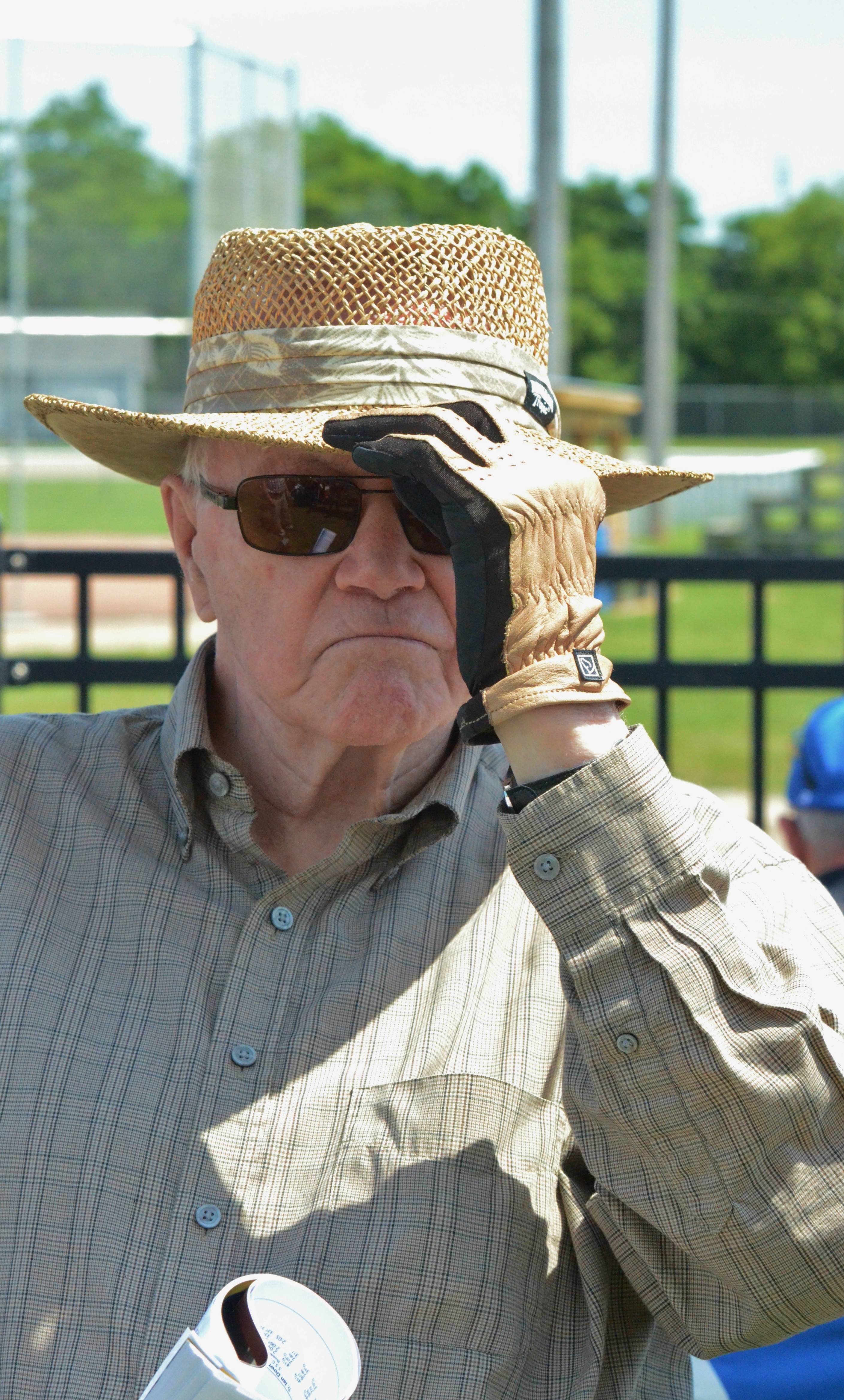 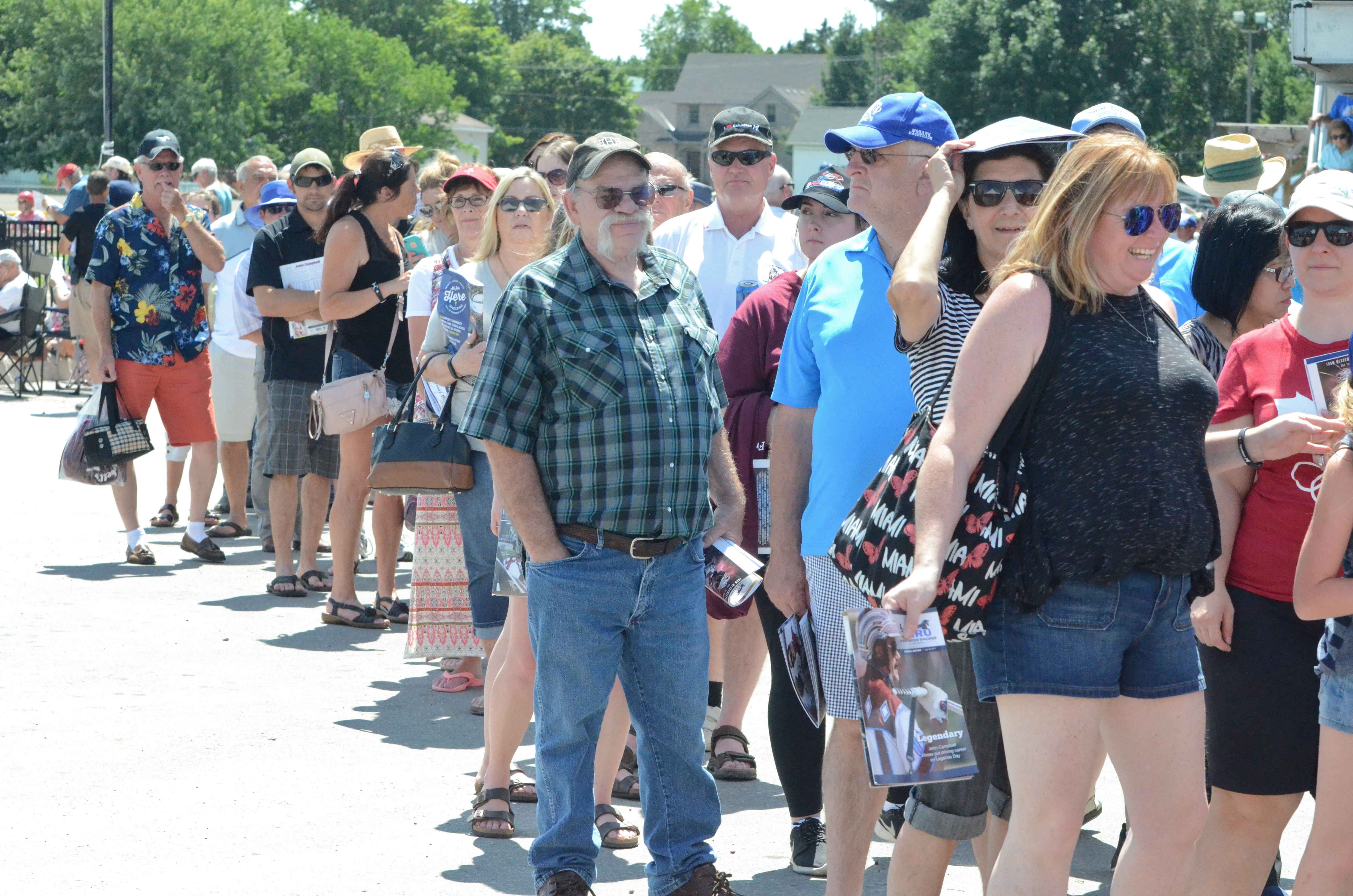 The lineup for autographs 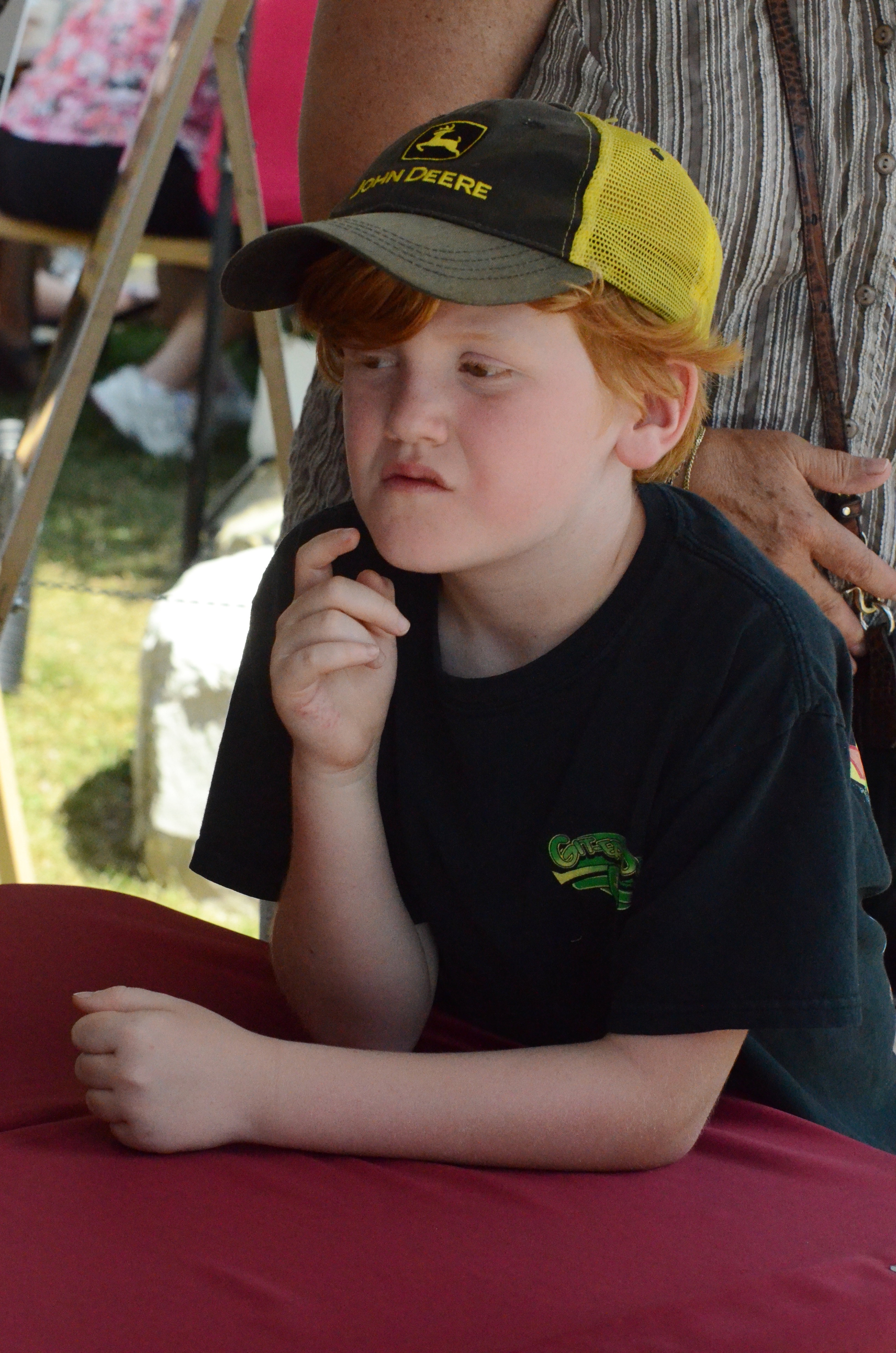 A little red-headed kid who stared and stared at the lineup of legends on the autograph table. Future star? 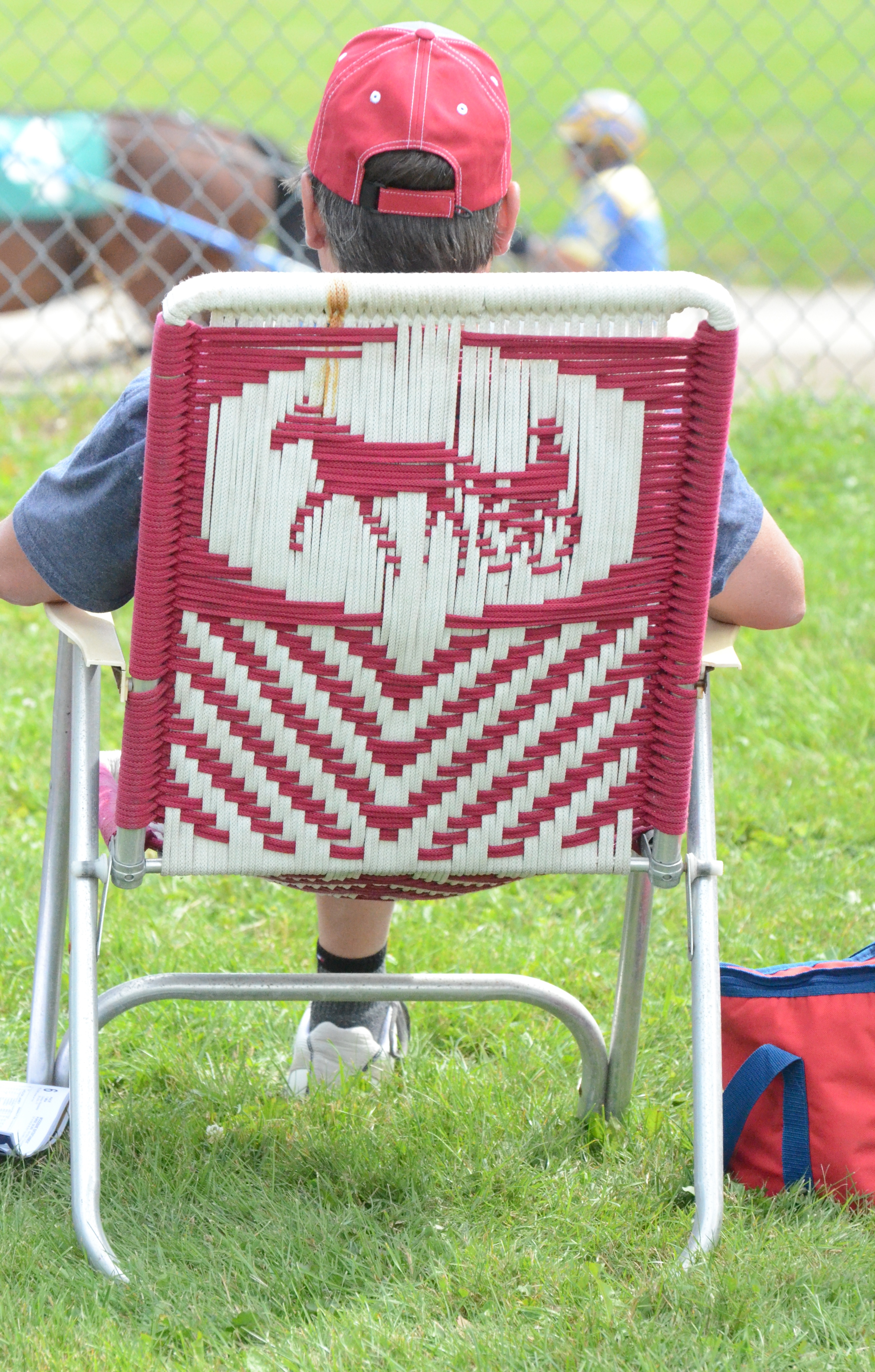 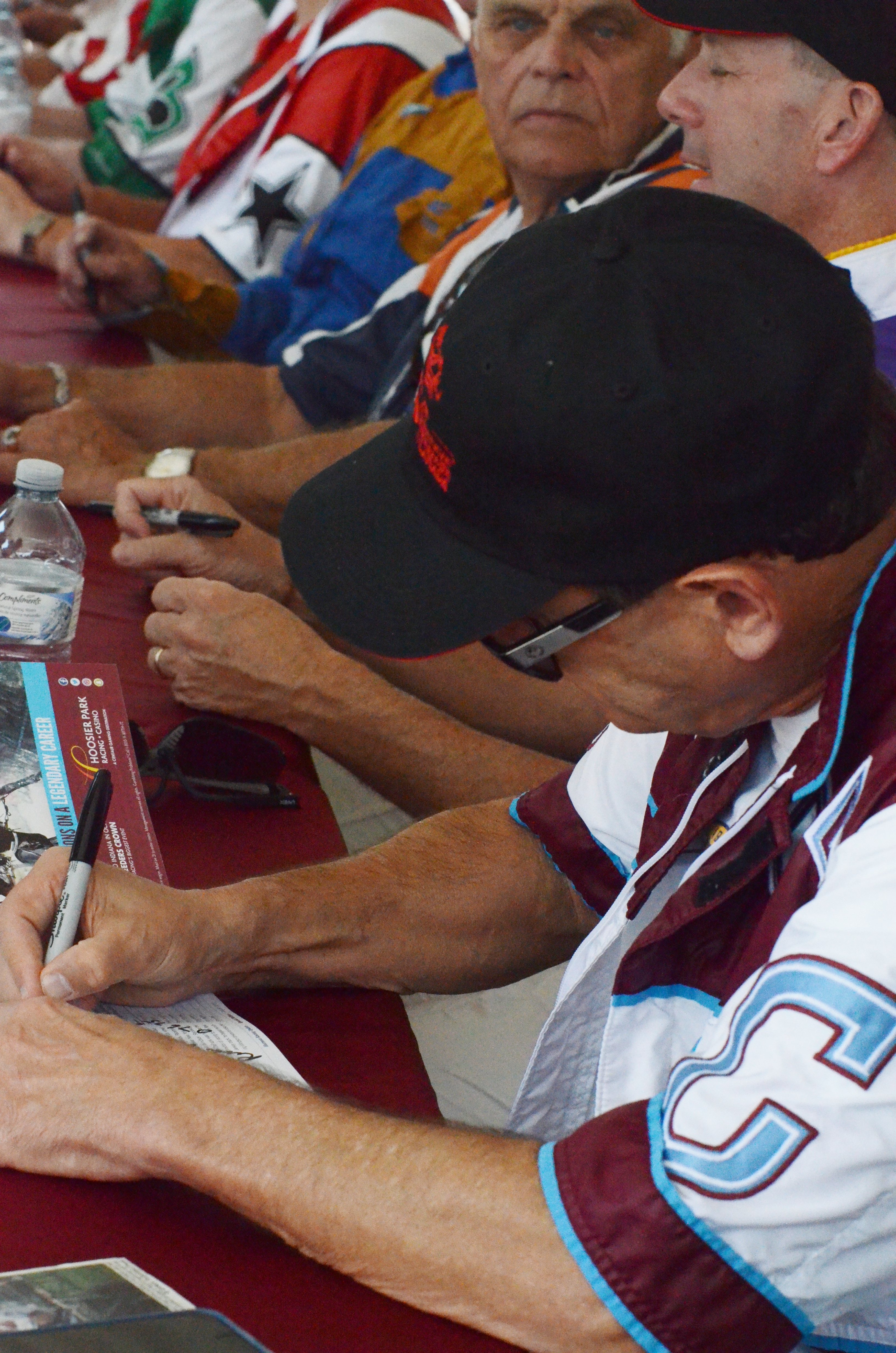 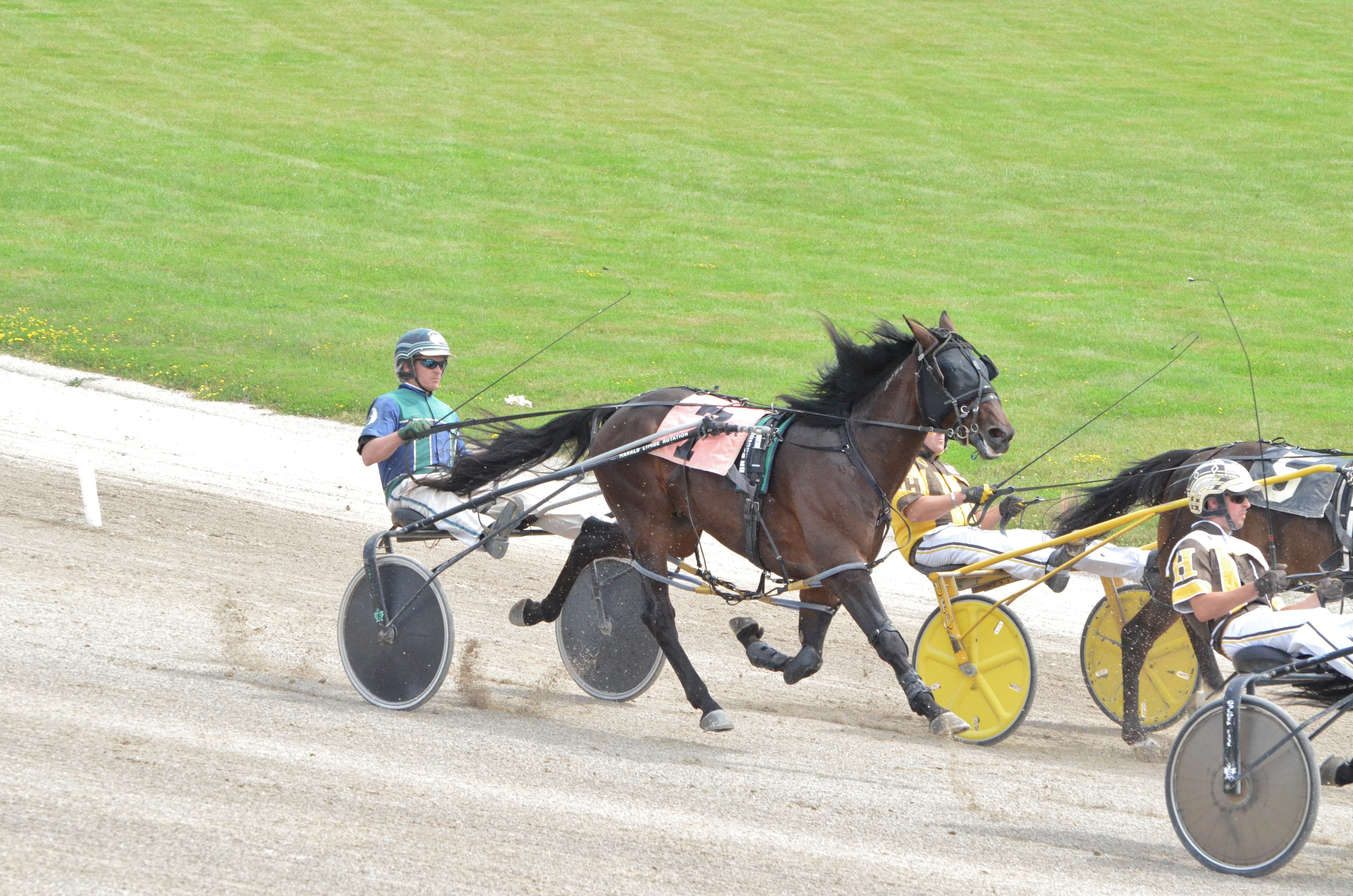 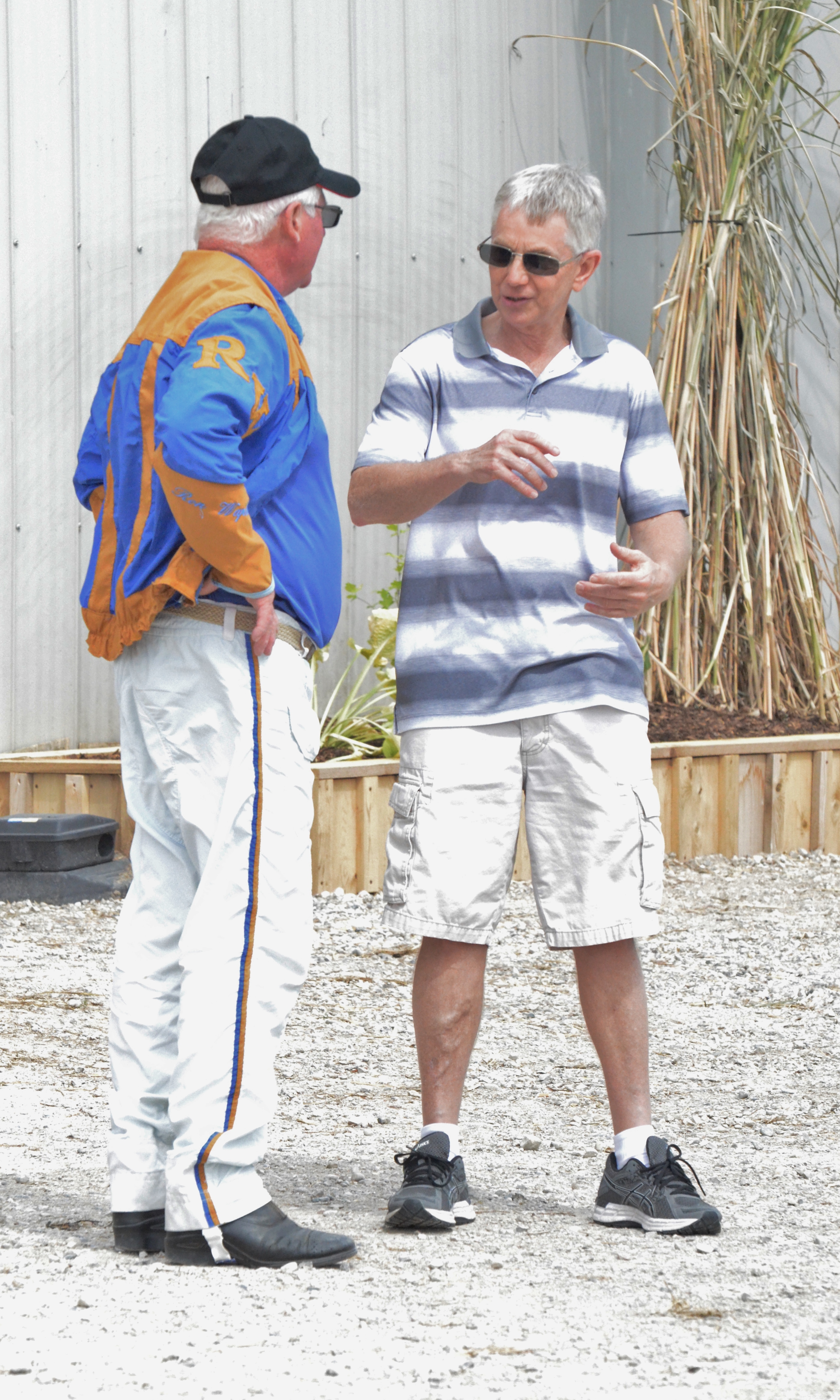 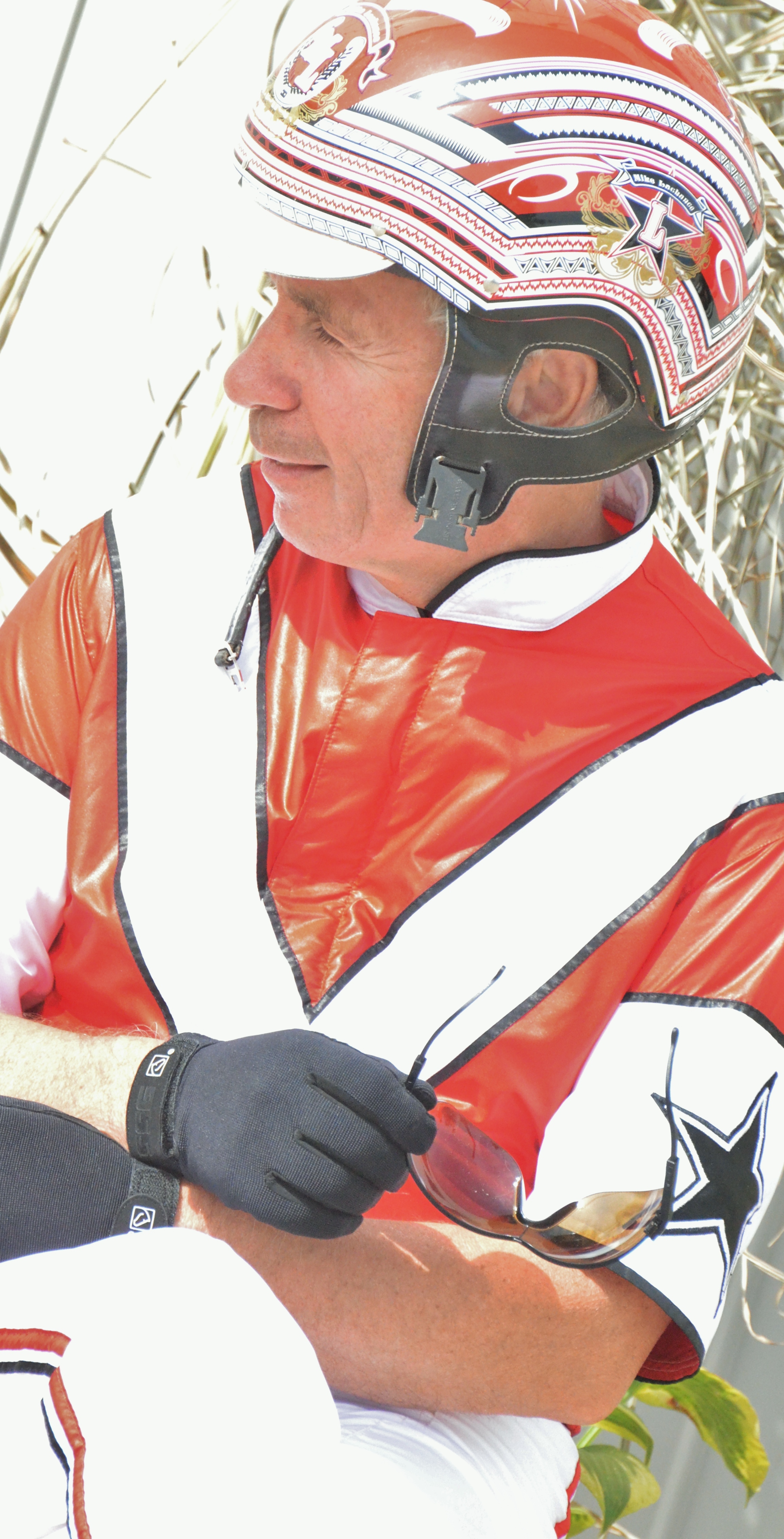 From left to right: the perfect lawn chair; the lineup of legends signing autographs, Blair Burgess, who will be inducted into the Canadian Horse Racing Hall of Fame next week, was driving at Clinton, too; Ron Waples talking to another legend, Trevor Ritchie, just visiting; and Quebec-born Michel Lachance, now 66. 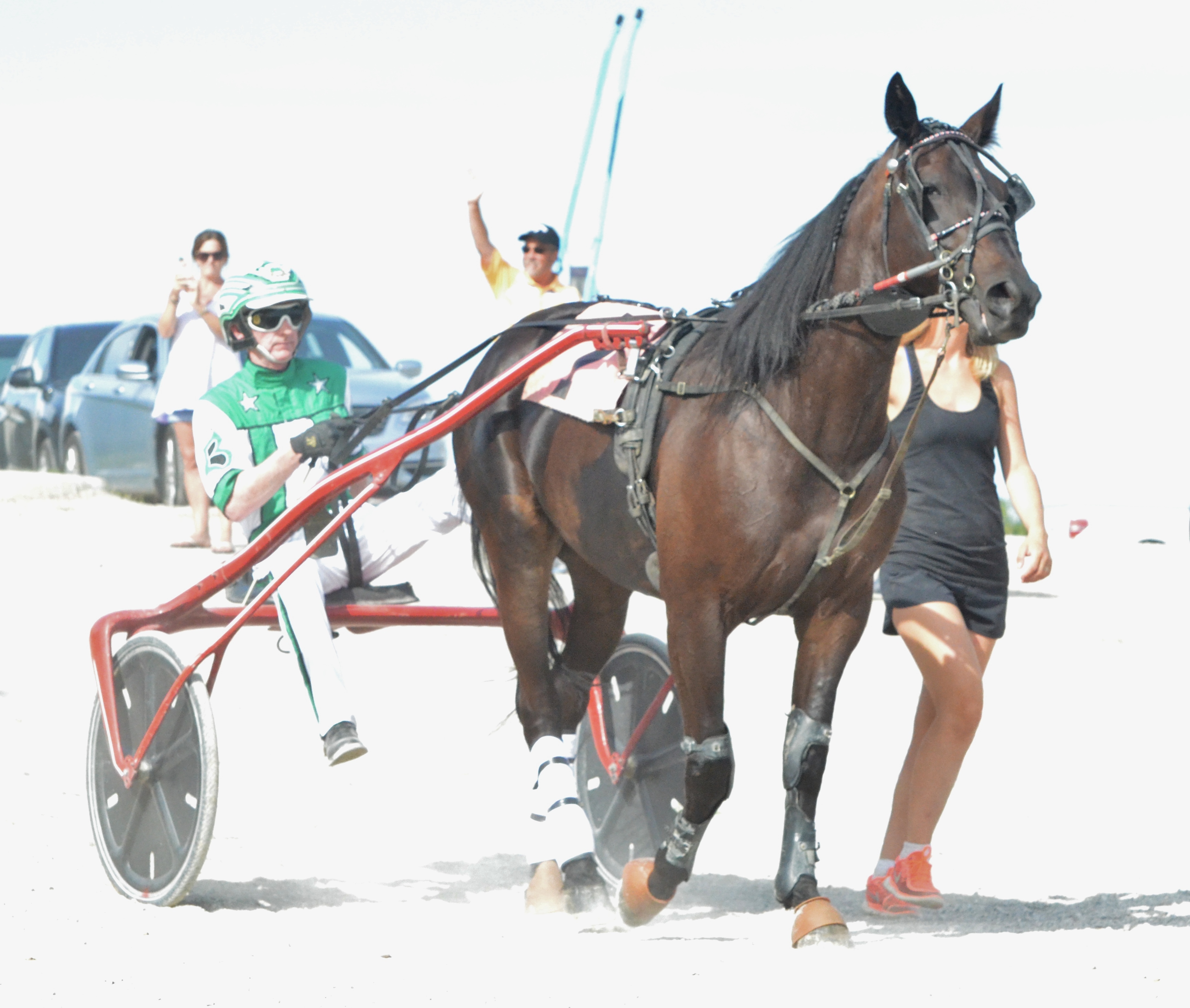 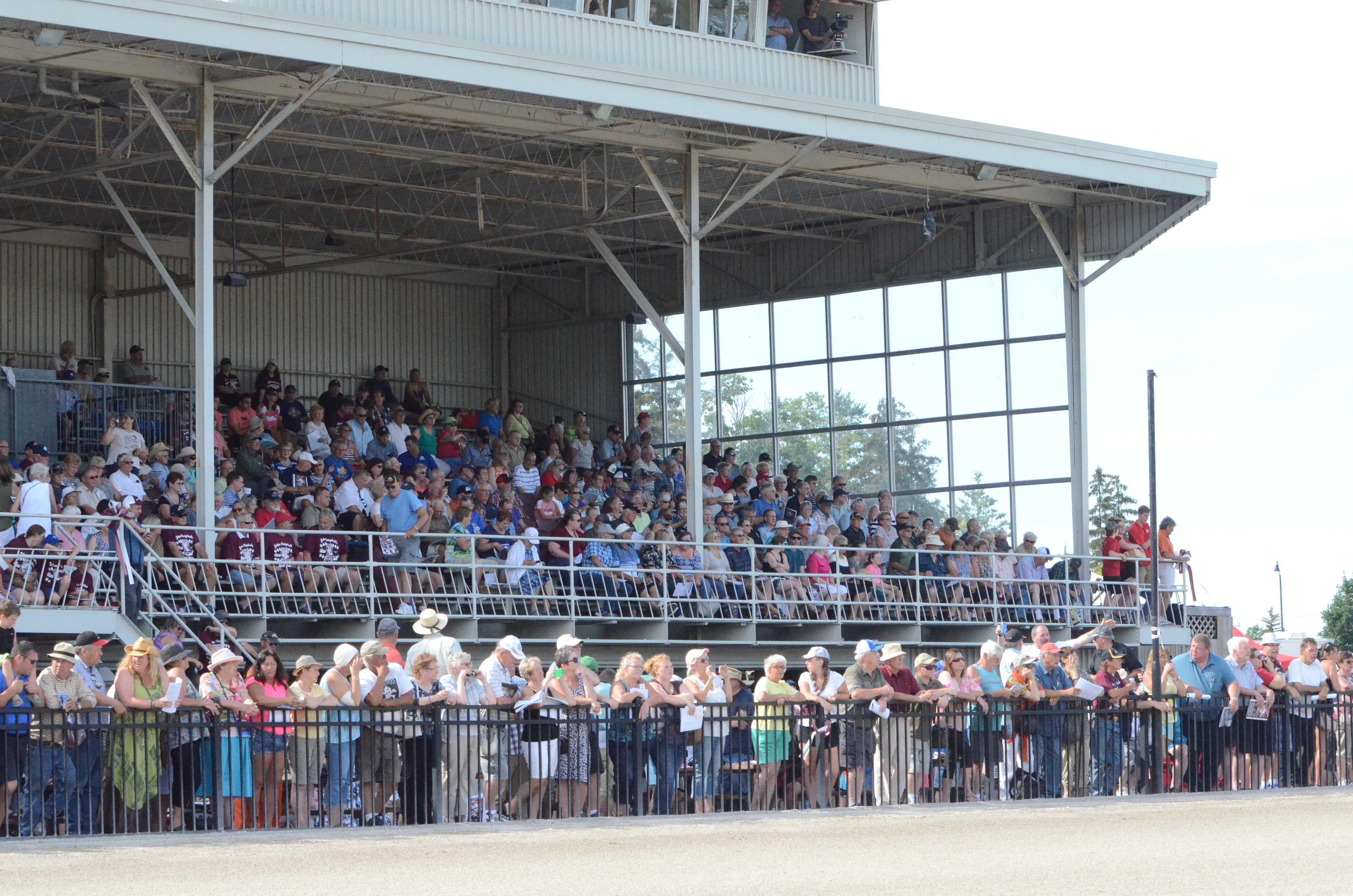 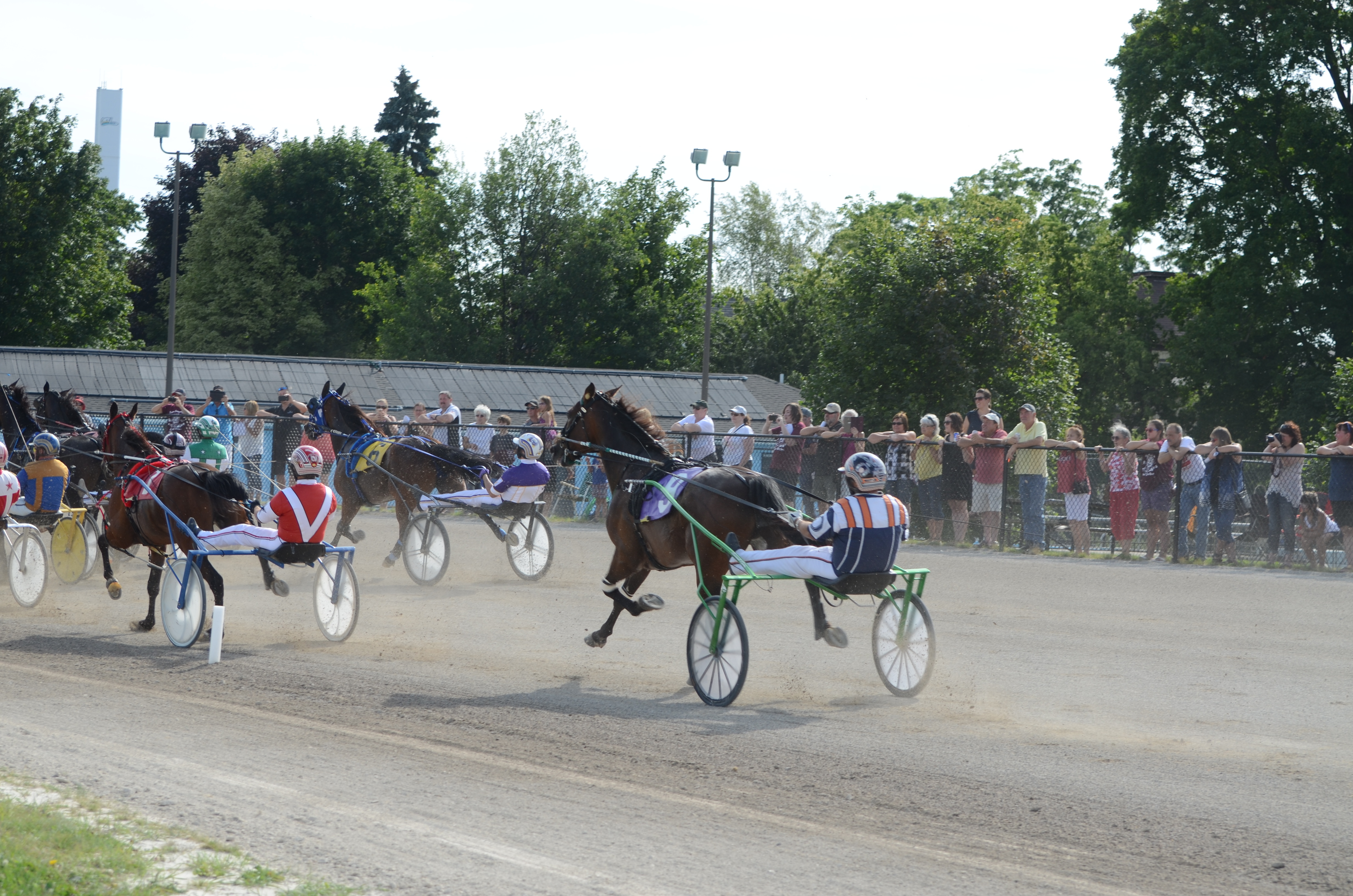 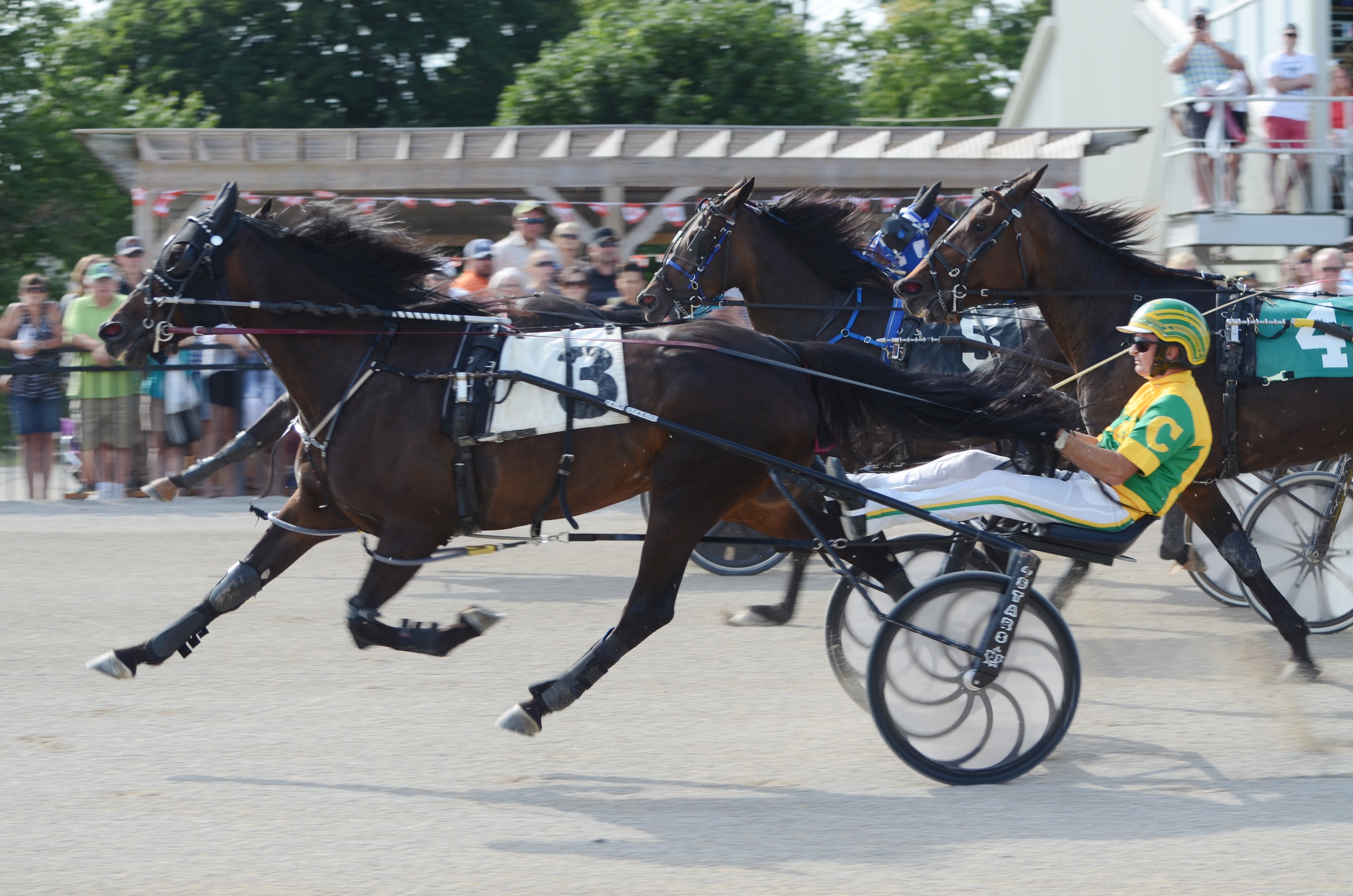 From left to right, Doug Brown, 61, driving Willheorwonthe(trained by Bill Megens in his eighties), the grandstand of Clinton, the view of the field, with O’Donnell at the back of the field, and Campbell in a scramble near the front; Steve Condren, 60, won the race. Campbell finished last after his horse, Happy Holidays, broke stride on the first turn. He said it was a carbon copy of his very first race. 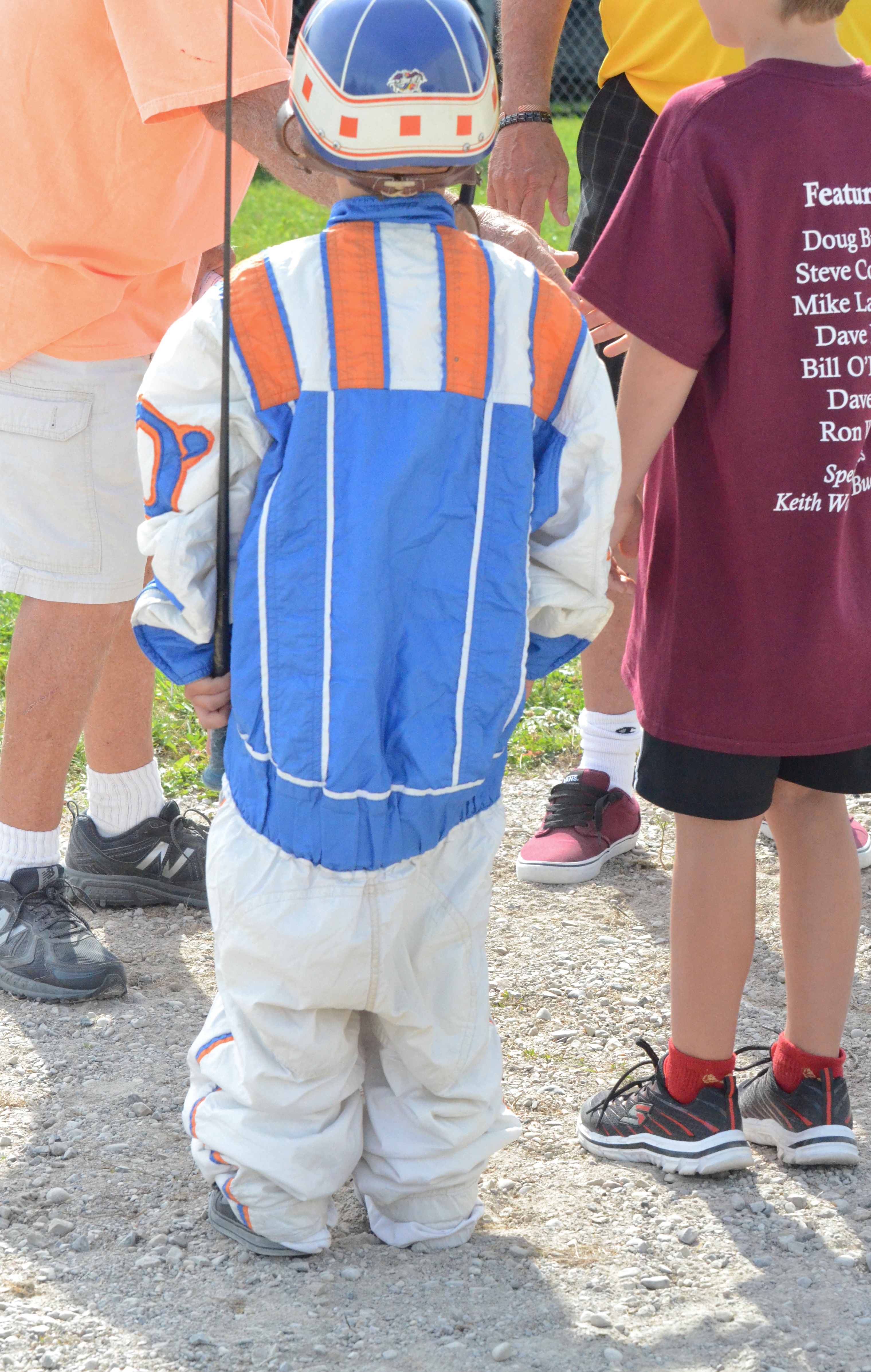 Years ago, O’Donnell gave his colours to a young man. Now the man’s son sported the colours at Legends Day. they fit well, don’t they? 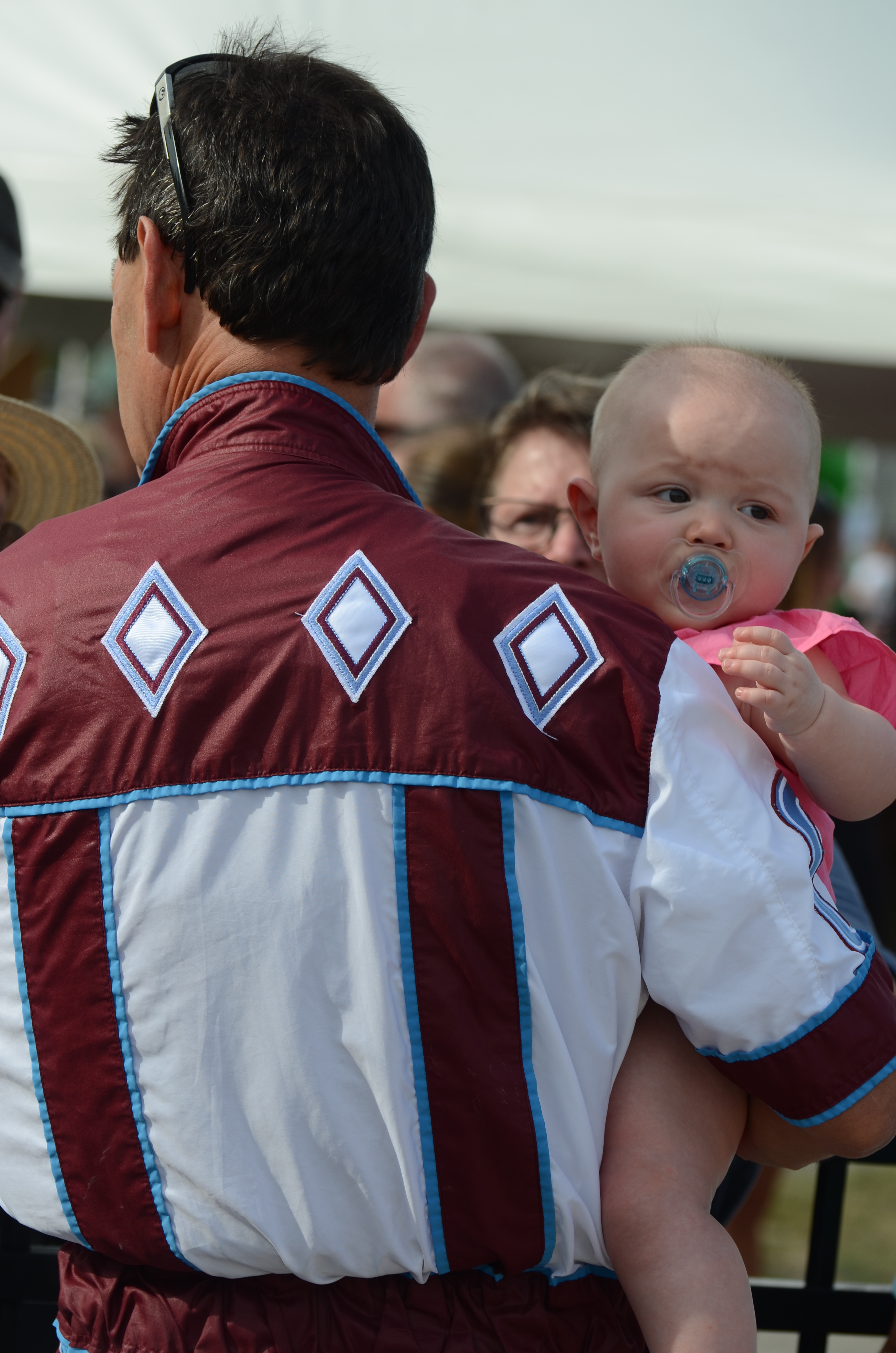