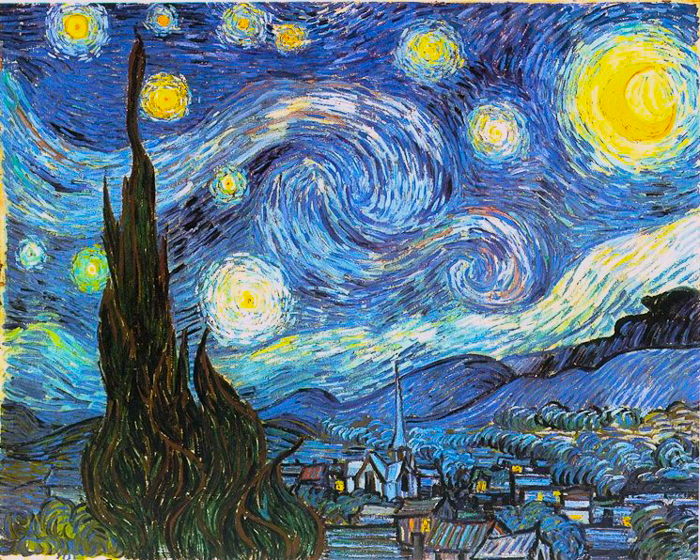 Okay, paint your palette blue and grey, Piper Gilles and Paul Poirier. Watch the swirling clouds in a violet haze. Nothing could be more painful and splendid than to touch the art of Vincent Van Gogh.

Yes, this new free dance of Gilles and Poirier hits a nerve. Van Gogh is my favourite artist. No reproduction of any of his work comes close to seeing Van Gogh’s canvases in real life, in real time, his actual brushstrokes so clearly soaked in despair mixed with beauty. Not even.

It’s a story that Gilles and Poirier explored two years ago following the release of the “Loving Vincent” movie, the world’s first fully painted feature film that explores his death/suicide. “We listened to the soundtrack, but it just wasn’t full enough or the right music, so we kind of shelved it and forgot about it,” Poirier said.

Then along came Govardo, European street buskers, of all things. Coach/choreographer Carol Lane discovered them on social media during the Pyeongchang Olympics. She kept it a secret for a long time, until Poirier started peppering her with questions after the world championships: “Okay, what idea do you have for us next year?”

He kept asking. And finally Lane showed him the video on Youtube of musicians Jack Rose and Dominik Sky taking to the streets, playing their own version of Don McLean’s hit “Starry Starry Night.” Their version spawned more than 80,000 views globally. (Below is the version Lane actually saw.)

There was just something about their heartfelt style, their voices. “Why don’t you message them on Instagram, because they have an account?” Lane suggested to the ice dancers. And the next thing, they had their email address and then they met them on Skype. Govardo came on board right away, intrigued with the idea of customizing music for another artistic pursuit: ice dance.

Every innovative, interesting program that Gilles and Poirier has done up to this season has prepared them for this momentous undertaking. They will skate to the story of Van Gogh and how his artist journey caused him pain, caused him to go mad, end up in an asylum. The piece is about the relationship between Van Gogh and his art.

From across the Atlantic Ocean, Gilles and Poirier sent a boatload of videos showing their previous performances, illustrating how important story-telling was to the whole thing. So Govardo revamped the Don McLean classic to make it work with the structure necessary for competitive ice dance. The first version wasn’t bad at all. In fact, Gilles and Poirier kept much of the first half.

The first time they heard the music, Gilles and Poirier both sat there for a second after it finished, just to digest it “because it was just so beautiful,” Gilles said.

But as they choreographed the program, they found spots they wanted to adjust, to make louder, or stronger, or slower. “There was one, the instrumental section where we wanted to add a drum beat behind it,” Poirier said. They went on Skype to better illustrate what they needed. Lane began to scat sing: “Bum, da, da, da Bum, da da da, upupup!”

“It was quite comical actually,” Poirier said. “We should have recorded it.”

Govardo mimicked exactly how they wanted the drum beat to be, and where they wanted to pick up the pace, or slow it down. “They were so willing to help us,” Poirier said. “I think our biggest thing was that we obviously needed the musical vehicle, but at the same time, we didn’t want to get in the way of their integrity as artists, so they wouldn’t put out a piece of music that they wouldn’t stand behind.”

Seven or so versions later, they had it. Every good skating program should build momentum to the end. Govardo did that for them. “They were very eager to learn about the sport and what we needed for us to do our jobs, and give it the impact that it needed,” Gilles said.

Jack, said Gilles, is the brains behind the duet, and Dom is the singer. (They did bring in an Irish percussionist to provide the required drum beats.) “And when he sings, it’s magical,” Gilles said. “He takes you to a new place. They are kind of like us: you’ve got the brains and you’ve got the little artsy fartsy one over there [nodding her head towards Poirier]. They are very much like us. We’ve got yin and yang going, and I think it’s very special to work with other people that are like us.”

Govardo call it “a beautiful collaboration.”

Rose and Sky met in Bath, England and they say they busk for many reasons. “One, being that we love travelling to new places and creating a spontaneous experience for unsuspecting passersby,” they said.

“It’s so powerful to see a crowd of people standing together, made up of folks from all backgrouns and walks of life, connected randomly by some magical moment,” they said.

They say busking also helps to build a core loyal fan base from people who feel a personal connection to them after seeing them on the street – and then follow them on social media. Govardo checks the weather every day to follow the sun, so to speak, to “somc place where we can put on a show.”

They also do concert tours, and are currently booked for shows in Moscow, Voronezh and St. Petersburg. Then they’ll head to Mexico for “a creative writing period.” Don’t be surprised to see them at the Parliament Buildings in British Columbia some time next year.

“It was just like they get who we are as people and as artists,” Gilles said of the British musical duo. “I think that what’s special about this whole thing: It’s two different artistries coming together as one.”

Actually, it’s three. Gilles and Poirier are taking it one step further: an artist’s painting fused with music, fused with dance (on ice.)

All this, and Gilles and Poirier had never met Govardo face to face.

They finally met them for the first time at the Nebelhorn Trophy in the mountain town of Obertsdorf. Gilles and Poirier won the event. But Lane caught first sight of Govardo – unfamiliar with the way skating competitions work – sitting in the practice rink, waiting for something to happen. She directed them to the main rink where the competition was taking place.

Gilles and Poirier met them for a few fleeting moments just before they were to take to the ice for their Vincent free dance. “I think it was really special to have them there for the first performance of the Vincent program,” Poirier said. “We were really glad that we were able to share that with them.”

They did not want the process to feel as if they took what they needed from these artists and then dropped all communication with them. “I think this has allowed for the spirit of collaboration to continue throughout this project and this season,” Poirier said. “It was such a pleasure to finally meet them, and just feel their energy.”

They all managed the day after the free dance to ride a cable car together up a mountain. “We had a grand old time,” Poirier said.

They watched Govardo busk at a church in a town square, too. “I think it was really nice for both of us to see each other in our respective elements,” Poirier said. “And to appreciate the art of each. I think it made for a really nice trip and it made it a very special event for us.”

Most memorable were the moments in which Gilles and Poirier met Govardo after their free dance performance. The Govardo guys were in tears. “Both of them were like: ‘This is so beautiful!” Gilles said.

“It was just like waterworks. After meeting them, I don’t know why, I just got really emotional and I started crying. Everyone started crying. They just brought this certain energy into that program that just makes me feel so much.”

The musicians listened to themselves over an arena loudspeaker, and then watched the Canadians dance to it. “It was a whole energy and I think a lot of people just got caught up in it,” Gilles said. “I think it was really special. It was pretty wonderful.”

They hope to meet again with Govardo later this season at another competition.

And it just got better. People watching the program descended the stands in tears. And when Gilles and Poirier took the top step on the podium, they met Angelika and and Erich Buck, West Germany ice dancers who won the 1972 European championships, upsetting eventual Olympic champion Russians Ludmila Pakhomova and Alexander Gorshkov. The Bucks, who invented the Ravensburger Waltz (“We won’t hold that against them,” Poirier said) are now in their late sixties.

It was a journey that validated the plans of Gilles and Poirier (who say they are taking one year at a time.) In deciding what to do about the coming quadrennial, they knew they wanted to continue competing because they love to skate. “But there are lots of ways we can continue to skate,” Poirier said. “If we compete, it’s because we want to compete – and win – and that’s what this quad has to be about.”

They know they will have to tackle three-time world champions Gabriella Papadakis and Guillaume Cizeron at the Grand Prix in their home country of France next month. But Gilles and Poirier know there are lots of good skaters in the world, that lots of dancers are doing difficult things, and interesting choreography, too.

“So the challenge becomes how do we get people and the judges to stand behind what we’re doing,” Poirier said. “And this is the way we decided to approach the programs this year, especially in the free dance, where we have more creative latitude.”

So far, it seems to be working. Their vehicles are special and unique.

“We have to have our goals set high if we want to be able to get into the rink and keep pushing ourselves,” Gilles said. “If we don’t have those, we might not do it.”