You are here: Home / Uncategorized / Duhamel and Radford: We can be heroes, just for one day
Tweet
0 Shares

Thursday was a good day, said Eric Radford, slipping into a rink-side seat at the Air Canada Centre during Stars on Ice rehearsals in Toronto.
It was good, because he – for the first time since the world championships in Helsinki – landed some double jumps. “And I feel fine,” he said. 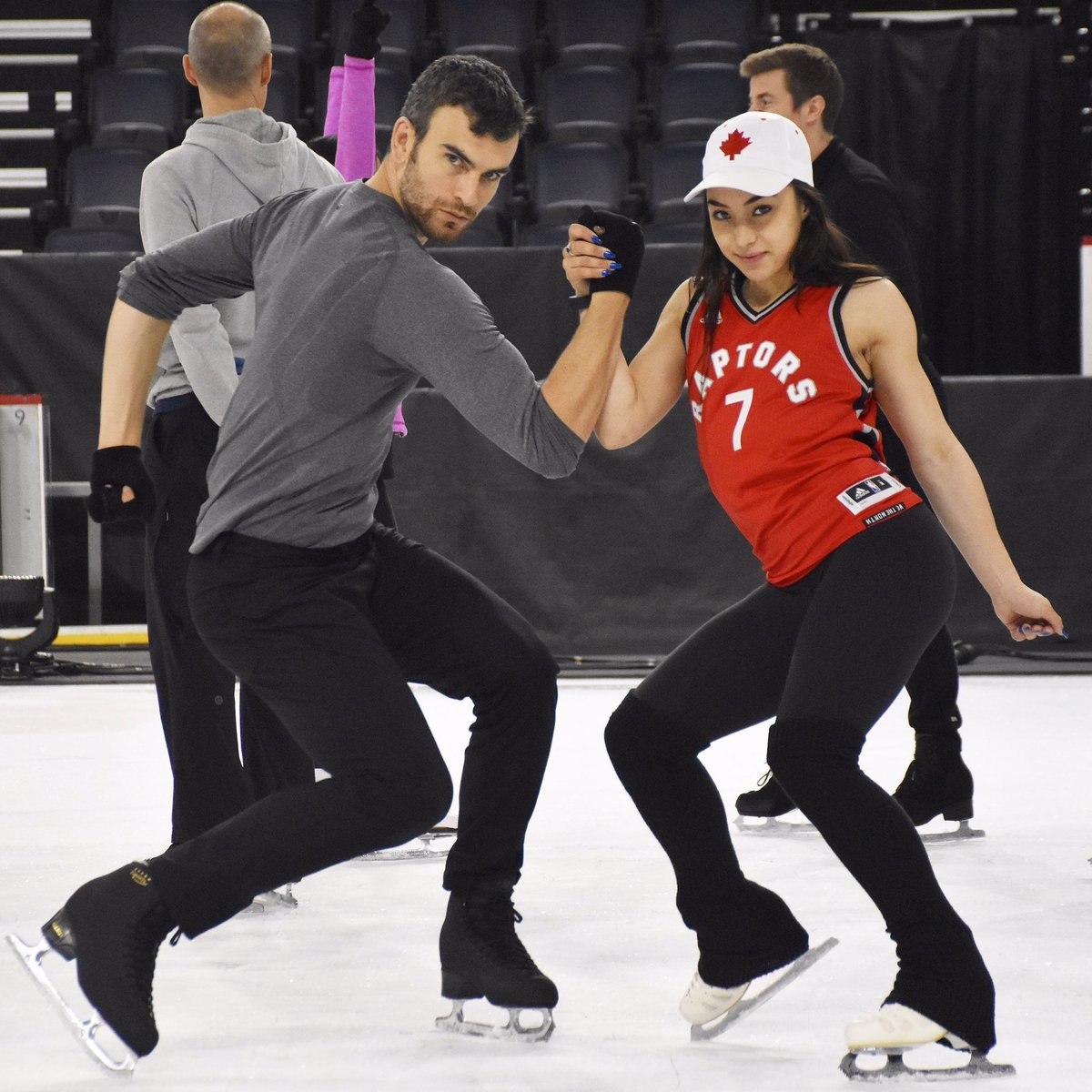 On tour, having fun with Gabby Daleman (Stars On Ice photo)
Radford and partner Meagan Duhamel finished seventh in Helsinki when Radford’s back/hip started bothering him badly at exactly the wrong time: the day of the short program. During morning practice, he couldn’t land a triple Lutz. After he returned from Helsinki, an MRI showed his L2 disc (the upper part of the lower back) had herniated.
Actually he figures he had symptoms hinting at troubles back in February. “I had some back spasms just a few weeks before Four Continents,” he said. “I was dealing with them when I was there. Then I had that tight muscle heading into worlds. I think they were all coming from the same place.” The injury got so bad on the day of the short program at Helsinki that he could not skate properly.
Looking back, Radford figures if his disc had herniated three days earlier, it would have given him some sort of chance in Helsinki. Still, he’s also lucky that it’s an injury that came at season’s end. “I’m right at the moment when I have the time to get better,” he said. “And we don’t’ have any extremely important competitions coming up.”
The herniated disc caused the two-time world pair champions to miss World Team Trophy in Japan, and at one point, they wondered if they would be able to do the Stars On Ice tour at all. The Canadian leg of the tour stops at 12 cities from April 28 to May 18, starting in Halifax and ending in Vancouver. For the first time, all of the cast members were Canadians, simply because there are so many powerful skaters in this country. The tour was to mark the first time that Kurt Browning, Patrick Chan and Elvis Stojko had skated on the same tour together. Add up their world championship titles, and throw in choreographer/director Jeffrey Buttle, and you have 11. The tour also celebrated the singular achievements of Canadian women, with Kaetlyn Osmond (silver medal) and Gabby Daleman (bronze) being the first Canadian women to win two of three world medals.
“Sitting at home was horrible,” Radford said. “I did feel very lost. It was so unknown. We didn’t know if we would do Japan, and I didn’t know if I would be able to do the tour even. It’s really nice to be back skating a little more now.” 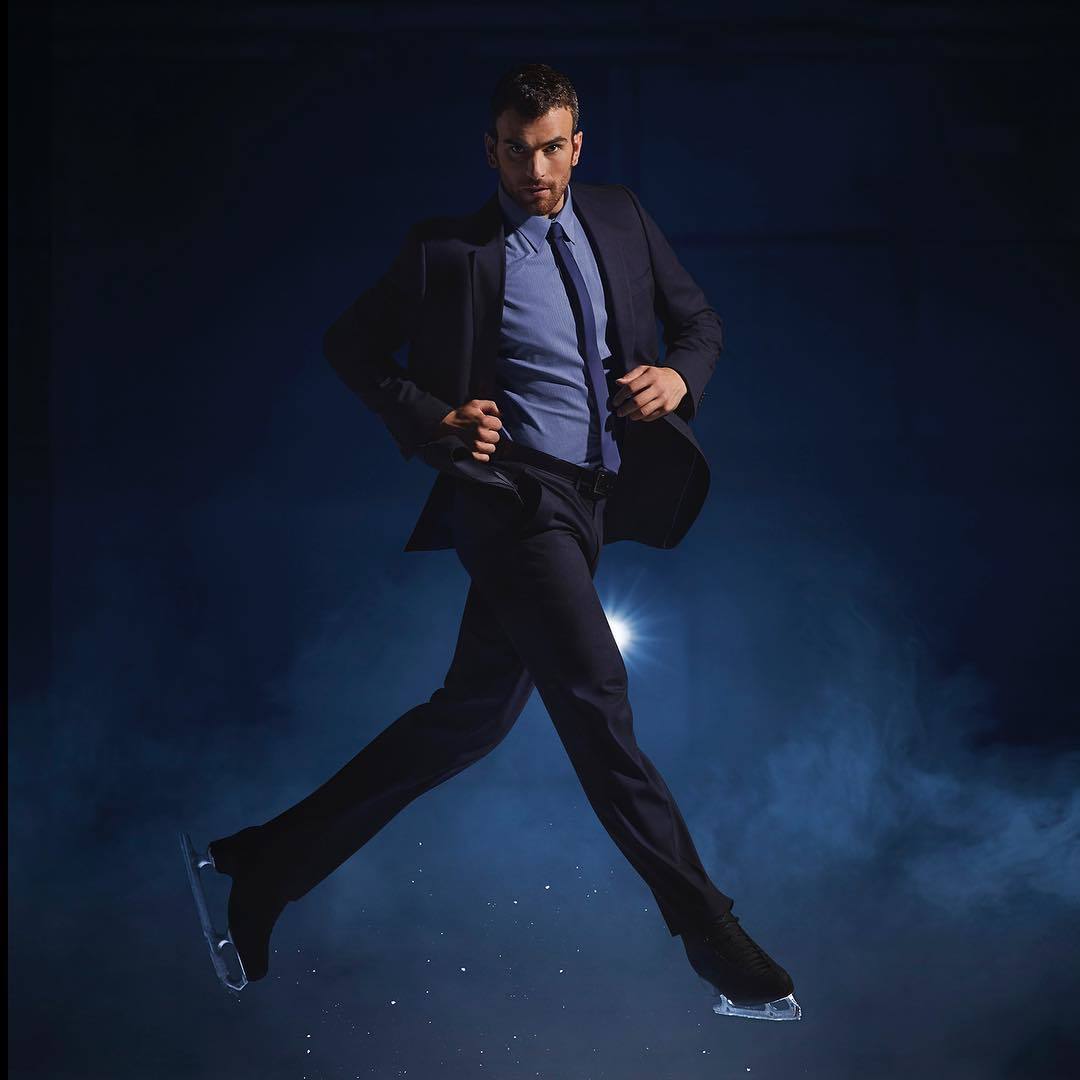 He had only been doing singles in the last few days. Then his physiotherapist said he should probably try some doubles. He wears a supportive belt when he skates. And he reckons he’ll have it for a while. “But jumping felt good,” he said. “It feels like I felt when I was a little kid on the ice again, by jumping my first double Salchow.” It WAS his first double Salchow in a month.
Duhamel said that she and Radford kept skating when they returned, because they initially thought they would do the World Team Trophy and the tour. But as the doubt grew, Duhamel was also mindful of the fact that fellow pair skaters Julianne Seguin and Charlie Bilodeau were forced to pull out of the Stars on Ice tour. “I knew the tour was down some numbers,” Duhamel said. “So I offered my singles services to Jeff Buttle if he needed a number filled.” She grinned.
In the end, she and her partner are doing the tour, albeit only one solo number, although they also take part in the group numbers. “I feel there is nothing I can do to control anything about Eric, so I just focused on myself and being the best I can be,” Duhamel said. She’s been working on some skills and has kept herself in top shape. “With the Olympics coming in less than a year, there is not a day to waste,” she said. “You have to be better than top shape every day.”
And she is. She says she’s in the best shape of her life right now. 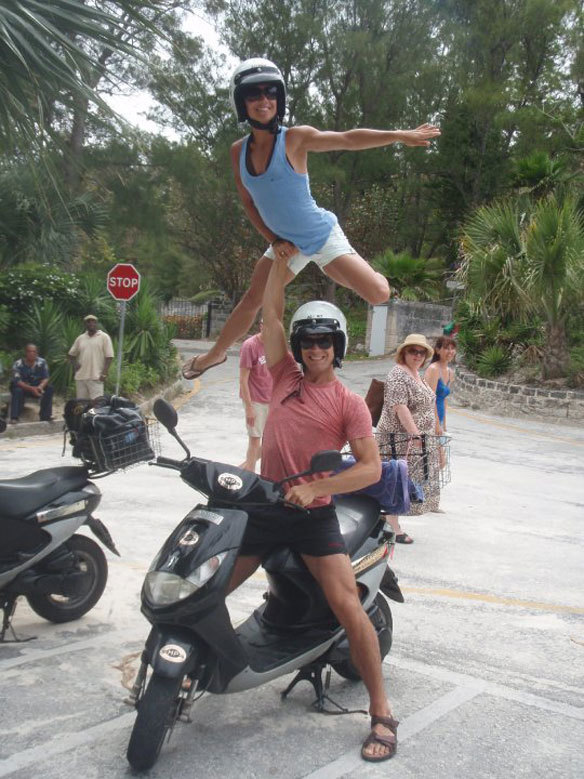 Coming on tour had its advantages for Radford. It meant that he was able to have a physiotherapist at any time, and he does physiotherapy three times a day. “Just moving and getting back into skating slowly has really helped [the back] to improve quickly,” he said.
“But I’m not going to be going back and doing triple twists or anything like that soon,” he said.
Their solo routine on the Stars on Ice tour is to a David Bowie Song: “Heroes,” but Buttle, as he did with many pieces in the show, gives familiar music a twist by using a version done by another star. (Tom Jones sings Leonard Cohen’s “Tower of Song, a number performed by Kurt Browning, and American Idol contestant Tori Kelly sings Cohen’s “Hallelujah,” in a routine done by Osmond.)

Duhamel and Radford skate to a version sung by Peter Gabriel.  “As people know, Meagan and I have been through so much in our career,” Radford said. “Ups and downs. We’ve had to beat a lot of odds and I feel like this song lends itself to that story.”
“I, I will be king,” the song goes.
And you, you will be queen.
Though nothing will drive them away,
We can beat them, just for one day.
We can be heroes, just for one day.”

The music was Radford’s choice. Dylan Moscovitch introduced the song to Radford at the Sochi Olympics. Radford loved it. When he presented it to choreographer Julie Marcotte, she loved it too.
For next season, they will return to their “Muse” free program, although it will be refreshed and reinvigorated for the Olympic run. They have a new short program that captures their story, too. They’ll announce it a little later. 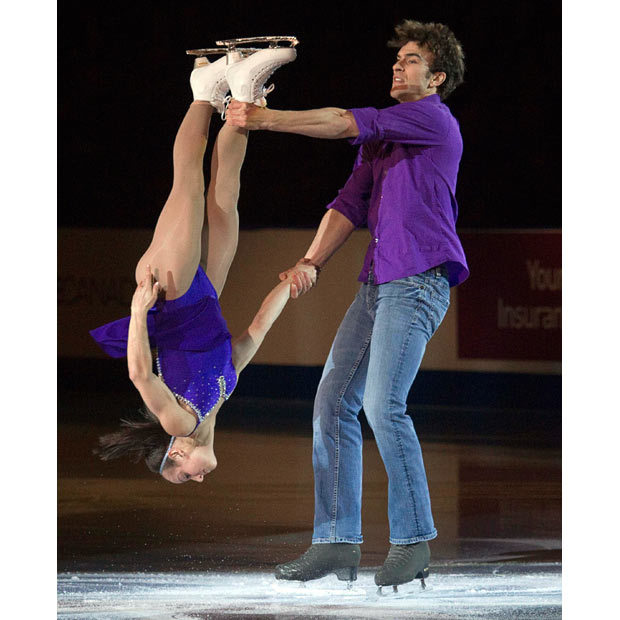 Their past season was not ideal. They showed up ready for the world championships, at their peak, ready to do the A game. The morning that Radford could not do a triple Lutz, and the music for their run through was about to start at practice, Duhamel knew she had to think fast. She skated over to Radford – no time to consult with the coaches first – and said: “Eric, we’ll do a triple toe.”
“We didn’t work that hard to go to worlds not to skate,” Duhamel said. “We’d find a way to skate. And I hadn’t tried a triple toe in three months. So I warmed one up and we did it with the music.”
“It was a bit of a different experience. It’s one thing not to practice a jump for three months and do one, but to have to do one at competition at worlds, is a little bit of a scary unknown experience. It’s life and it’s sport.” Curve balls are going to come at any time. Duhamel knows that it’s up to them to figure out how to deal with them. It’s not an option to deal with it in a negative mindset. “You can’t give up,” she said. “You find a way. You work around it and you make it work and that’s what we did.”
Looking back, the whole year was “pretty terrible,” Duhamel said. “The programs weren’t a fit for us. The skating wasn’t working. It wasn’t gelling. It was lacking some oomph and pizzazz. The whole thing, now that I think about it, was just like mush. A puddle almost. But we had two stellar seasons before that. You can’t be on top forever. You have to go through these ebbs and flows.”
They’ve dealt with the disappointment of finishing well off the podium at the Helsinki world championships. They’ve learned much. They know what to do. “We finished seventh. Life went on,” Duhamel said. “So what. It happened. It wasn’t as scary or as terrible as we thought it could be. And that just goes to teach us that it’s not that bad when you don’t win. It’s not the end of the world.”
“At the end of the day, if we go to the Olympics and skate really well and we come seventh, it is what it is,” she said. “But we’re going to do everything that we can and make the changes and strategize so that when we show up for next season for every competition, we are in the best shape of our lives, we have the best programs, that we’re motivated and we’re on the top of our game mentally and physically. And it has to be like that from day one in the season all the way to the Olympics. If we’re able to do that, then we’ll consider it a success.”