You are here: Home / Uncategorized / Donald Jackson: there's only one
Tweet
0 Shares 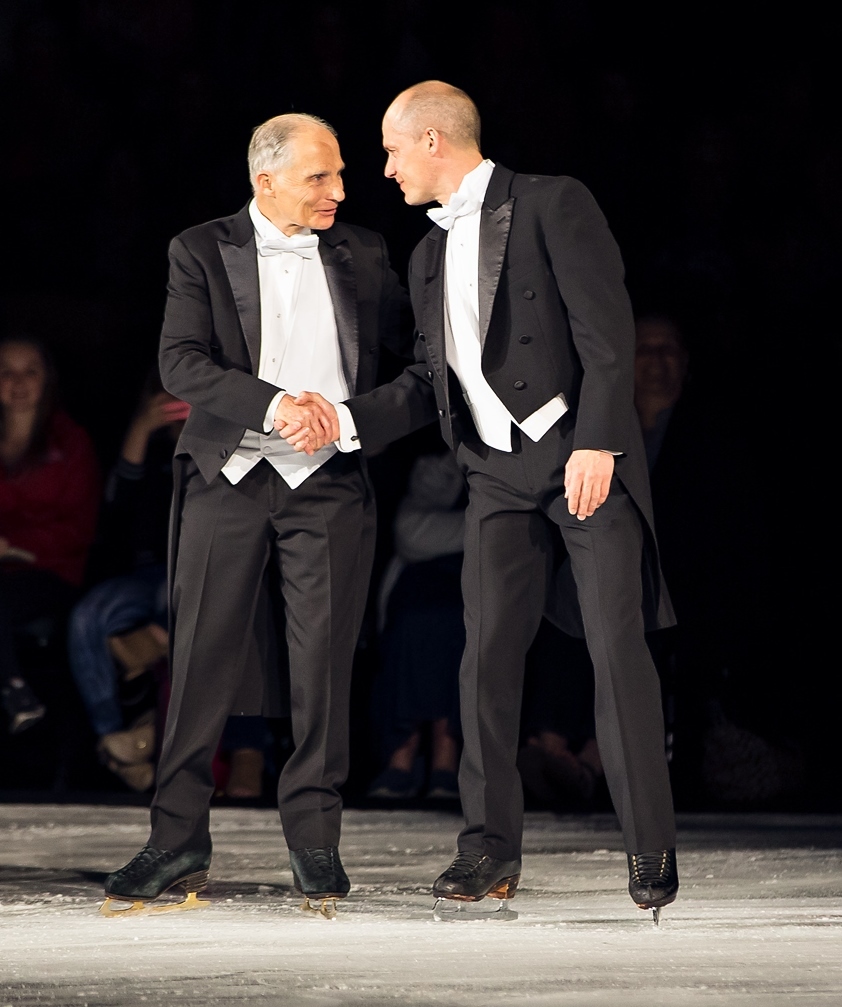 It started out as a tantalizing little secret.
“I have a BIG surprise for skating fans,” bubbled Kurt Browning on twitter several days before the Toronto stop of the 2016 Stars On Ice tour in Canada.
He started dropping hints. “Don’t Get Around Much Anymore?” King of Blades? The special guest would show up only in Toronto and Hamilton.
It all seemed hush hush. But when Elvis Stojko stepped out on centre ice and introduced the duo about to skate: Browning and Donald Jackson, the 1962 world champion, a hush settled. Yes. Donald Jackson, a newly minted 76-year-old in a tux and a grin, his packet in trade when he skated for Ice Follies so many years ago. He is the King of Blades, or so his autobiography was called.
They skated to “Don’t Get Around Much Any More,” a duet sung by a younger voice, Michael Buble, and an older voice, Tony Bennett. Perfect. When Bennett starts to sing, Jackson starts to skate. Buble begins to warble. So does Browning on skates. Genius.
Missed the Saturday dance
Heard they crowded the floor,
Couldn’t bear it without you
Don’t get around much anymore.
They stole the show. Fans that filled the spacious lower bowl at the Air Canada Centre in Toronto rose to their feet as one. It was the only complete standing ovation of the night. Everybody was in on it, appreciating the usual Browning thing, and the Jackson spirit of old: his head up, smiling, playing to the crowd, just like he always did, so many years ago. 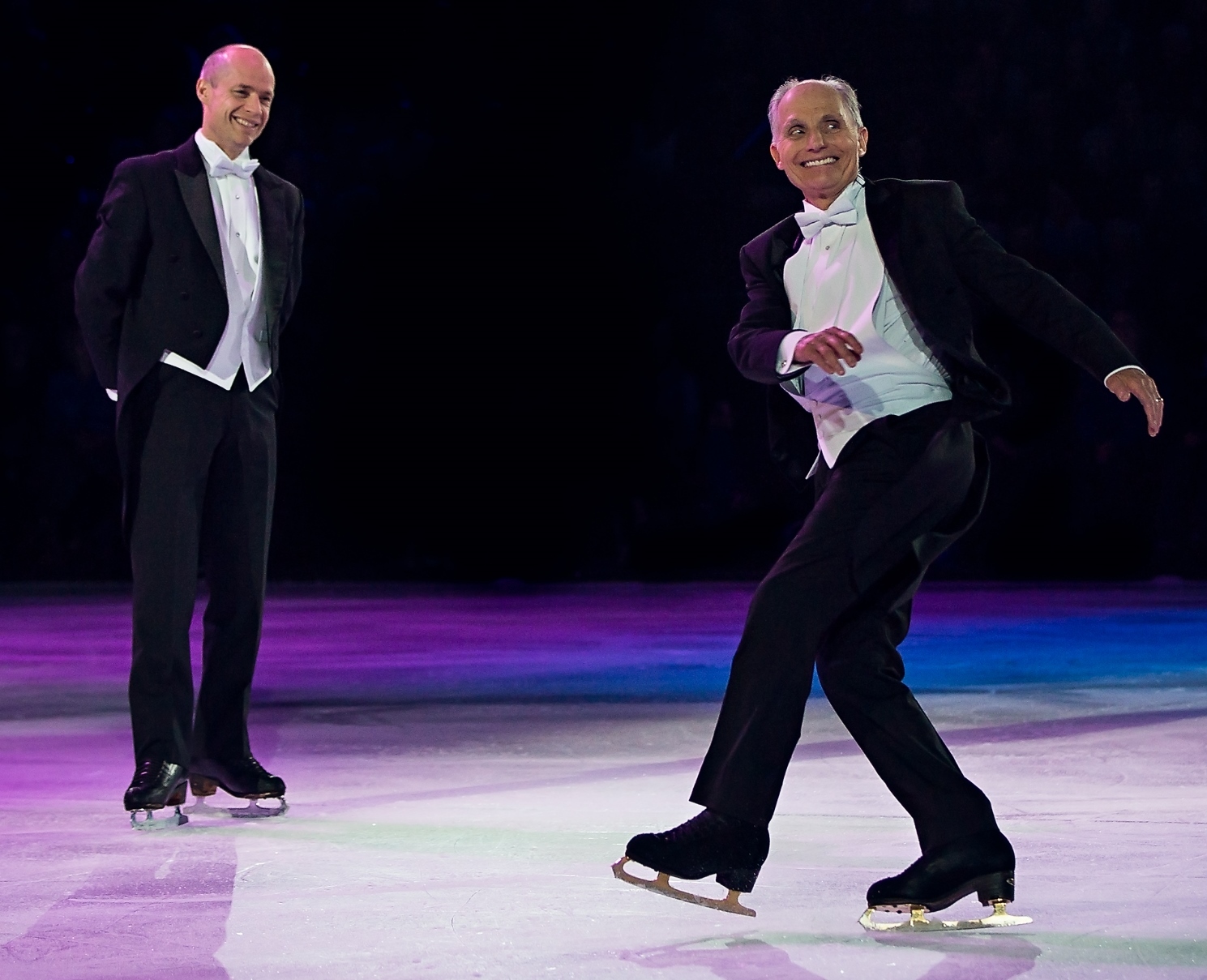 Photo by Julie Larochelle
The only other ovation that came close was for Browning’s solo in the second half, a solo with deft footwork, body movement, attention to every note. A ham, as always. Neither of them are newbies to this sort of gig. Browning will turn 50 in mid-June. Experience worked.
This is the first season that Browning is not part of the entire tour. He will take part in only five stops. But his sense of what charms a crowd is still fully intact. He created the duet, from start to finish.
Browning had been working on a commercial for the Home Equity Bank that will air later this year, and one day, in a creative meeting, someone suggested that another skater was needed in the clip. It didn’t have to be a known skater. Then somebody mentioned Donald Jackson’s name. Obviously, the name still resonates in Canada.
“Hmmm,” thought Browning. “He still skates. He’s charming. He’s funny. He’s handsome. Yes, yes, yes.”
They made it happen. They filmed the commercial. But Browning had to go further. If there was a camera around, they had to play at doing a duet. “Because that’s just too cool,” Browning said.
They filmed something very casually, in a rink, and thought perhaps it could be used to supplement the commercial.
But Browning’s instincts – dead on – were still at work. “This is so cool, people should see Don do this,” he thought.
So he suggested the idea to the Stars on Ice brass and they liked it, too.
Jackson is the oldest person ever to take part in a Stars On Ice show.
To create a number for the show, Browning asked Jackson to come to the Granite Club in Toronto and the “youngster” filmed the “oldster” doing all of his cool tricks. Browning wanted an idea of what a 76-year-old Jackson could do. He saw waves of fancy footwork, spins, an Axel jump.
“I tried to implement as much of his natural footwork into the program that I could, making it easier for him,” Browning said. “Otherwise, it’s more than he needs to worry about and besides, his stuff is really cool.”
“This show, I never expected,” Jackson said. When Browning saw what Jackson could do, he told the septuagenarian that he was actually going to push Jackson a little. “You can do it,” Browning told him.
“I don’t know if he pushed me, but he did,” Jackson said. “He was a good coach. He told me about the knees and what happens when you’re in the show [they tighten], and it just brought back a lot of things.”
Browning asked Jackson what sort of music he’d like to skate to. Jackson told him: something in the direction of Frank Sinatra. A week later, Browning had found the music and they began to create.
I thought I’d visit the club
Got as far as the door
They’d have asked me about you
Don’t get around much anymore. 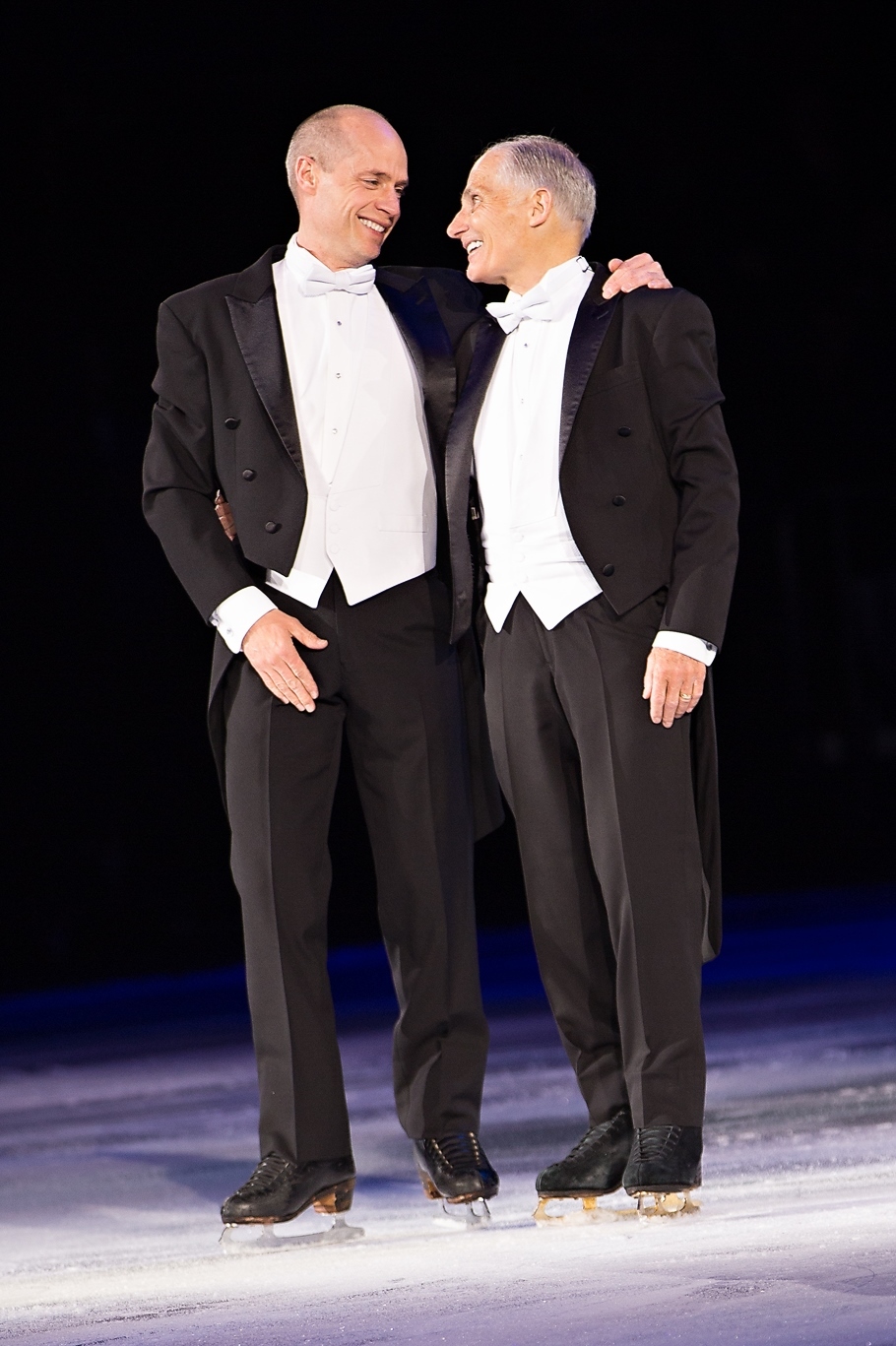 Photo by Julie Larochelle
Back behind the curtain on performance day, Jackson paced the halls, listening to the music on earphones, just like Patrick Chan or Javier Fernandez or Nam Nguyen would on competition day. He admitted to a case of nerves, a gimpy leg and foot. “He’s really pumped,” Browning said. “He really wants to land that Axel.
“He’s nervous. So am I.”
“Are you going to land that triple Axel?” he was asked in jest.
“No, but I’m dreaming of it,” Jackson replied.
Browning tried to help him ease the nerves, to bring back memories of how Jackson would have handled things decades ago. “Now Don, don’t think about what comes next,” Browning told him. “Just do it. Bend your knees and think ahead a little bit. Keep that soft knee.” Browning told Jackson that soft knee is his gift, and it’s something not everybody has.

Part of what was so special about the duet is that Browning and Jackson have a little bit of history.
“He gave me some advice when I was a kid about landing the quad and doing it,” said Browning. “And having the confidence to stick your neck out and go for it.”
After all, Jackson knew. He had been the first man to land a triple Lutz in competition at the 1962 world championship, the first time he had ever landed the jump in his life, at a hard-fought competition, in which he needed to be perfect in the free skate to win. And he did. “So he knew,” Browning said. “He was like: ‘Just go for it. You’ll thank yourself later. Just go and do it.’”
So Browning did and became the first skater to land a quad in competition at the 1988 world championships in Budapest.
Browning had met Jackson even earlier. When Browning won the Canadian novice title, someone grabbed him and led him to an unfamiliar room – the media room. “I didn’t really know why,” Browning said. They planted him in front of a man with a pen and a piece of paper. It was Jackson, who was working at the time as a skating correspondent for a Toronto newspaper.
“I’m going: ‘Oh my god, that’s Donald Jackson,’” Browning said.
Jackson started by asking him how it felt to be Canadian novice champion. Browning hadn’t even realized he had won.
“What?” Browning said.
“How does it feel to be novice champion?” Jackson said again.
“I won?” Browning cried. “I won! I won!” He began jumping around the room, later reminiscing that Jackson must have thought: “How does this kid get to the rink?”
Browning and Jackson haven’t spent much time together since. Browning also had a relationship with Barbara Ann Scott, who became affectionately, his adopted grandma.
As for Jackson? “Let’s call him skating Dad,” Browning said. “I don’t think he’d want to be called Skating Grandpa. He’s very proud of his age, but there’s a limit.”
Browning wanted to do something creative and interesting and fun with this man. The theme of the music, according to Browning is that “I don’t get around and womanize anymore because I’m in love with you.” But for the Browning/Jackson duet, it’s simply: “We don’t get out of the house much anymore. And here we go.” At various points, they clench their hips, as if their bodies are giving out. Jackson shakes a finger at Browning. Tsk tsk.
Darling I guess, my mind’s more at ease
But nevertheless, why stir up memories?
During the shows in Toronto and Hamilton, Jackson landed a single Axel on two feet. He’s annoyed with himself, still a true athlete. He’d been 90 per cent consistent at landing them in practice. But he was taken aback when the crowd applauded him doing a waltz jump.
“I thought, what the heck?” Jackson said. “I couldn’t believe it.”
It’s not as if Jackson has had to crawl into an attic and dust off old leather hardened by time. He still skates three times a week in a public sessions that he shares with three “older guys” who skate around the outside, while Jackson skates around the inside of the ice surface in Oshawa.
And he teaches too, mostly CanSkate and adult skating. “I don’t want to teach competitive skaters, because once you do that, your time is their time,” he said. He does work with some singles skaters, but loves working with young skaters, trying to instill in them a love of the sport so that they will want to return, as he has.
He’s always kept up his skills, as he can. He landed a triple Salchow when he was 60 years old. There is a private video to prove it somewhere in the dustbins of time.
After his ground-breaking performances in Stars On Ice, Jackson phoned Cathy Sproule, who asked him to skate solos at intermissions of NHL Legends hockey games that traveled across Canada. In the first season, Jackson did 20 shows in 22 days. But he kept coming back from 1998 to 2008. He credits this 10-year gig with helping him to stay fit enough to skate at Stars On Ice at age 76.
He reveled in the standing ovations during his brief stint, but the best part of being invited to skate was the feeling that he was part of the skating family, again. “It’s different, going back into an ice show like that again,” he said. “But what I really liked was getting to know the stars. They know me because I’ve been around, but just to say hi. Now I know them as real people. They were so nice to me. It was so nice to see that all of them were stars in their own right….They worked their tails off.”
And the way they spoke to Jackson, it was “almost like they had me on a pedestal,” he said.
Andrew Poje admitted he felt intimidated by Jackson’s prowess. “He does things I wouldn’t even dream of doing,” he said during rehearsals.
“They are being nice to me,” Jackson said.
“He killed it,” Tessa Virtue said of Jackson at the Hamilton show.
“We will have to tell Don to tone it down a bit,” Scott Moir said. 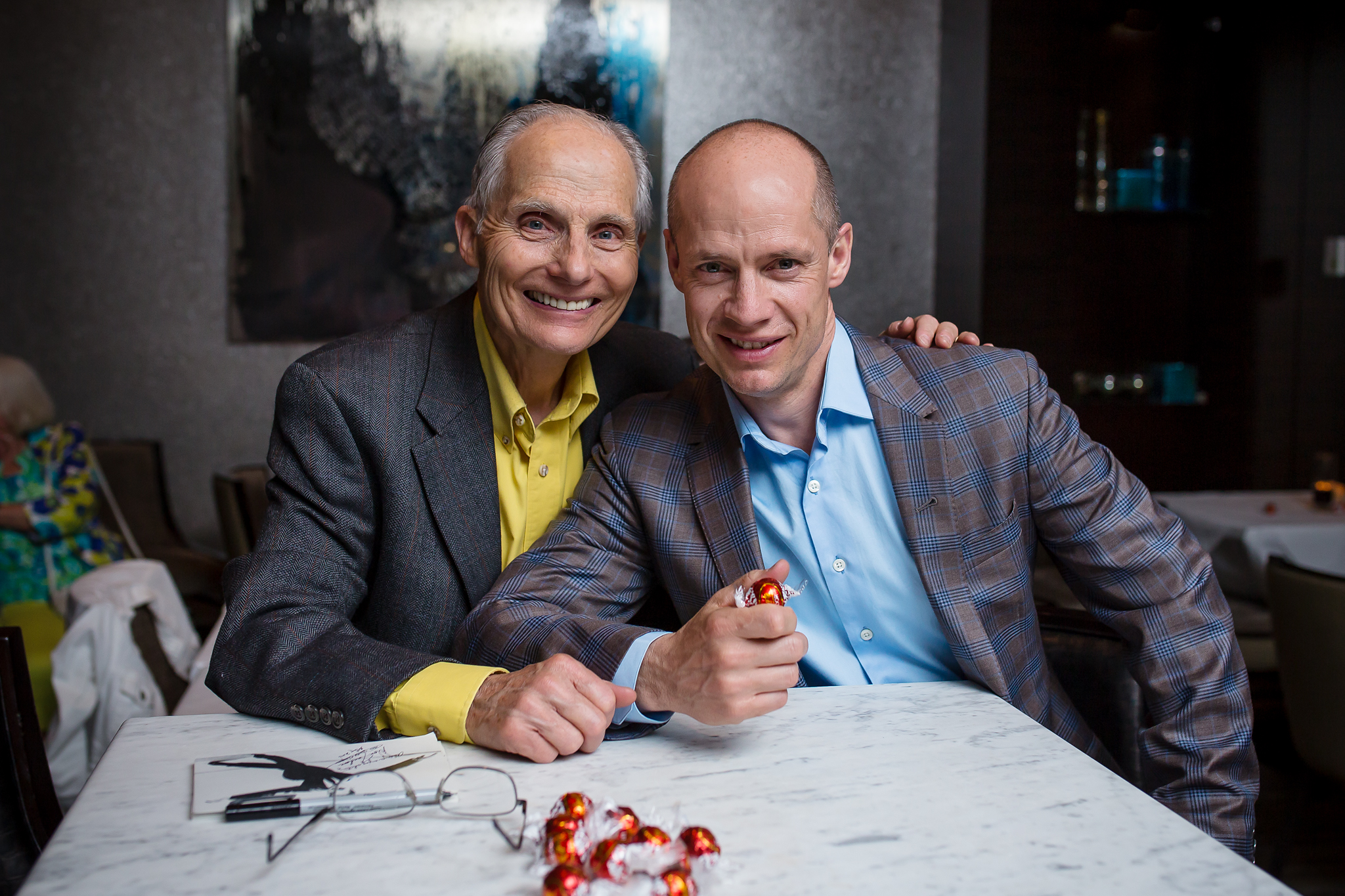 Photo by Julie Larochelle
The whole thing has energized skating in these parts in the right way. And reminded us that the old trick ponies have a lot to offer.
“I don’t know if there is anybody else I could have skated with that made us look good together,” Jackson said. He might have told Browning:
They’ve been invited on dates
I might have gone but what for
It’s awfully different without you
Don’t get around much anymore.