You are here: Home / Blog / Daleman, pressing onwards to the free
Tweet
0 Shares

Today, Gabby Daleman will find her rhythm.
It’s what she does in times of peril. The national championship proved to be one of those times, when she endured strep throat, that was replaced by pneumonia by the time she whizzed through her free skate to the rapturous “Rhapsody in Blue.” Even so, she took her second Canadian title from the splendid Kaetlyn Osmond. Always breezily positive, Daleman calls her respiratory ills just more cardio training.

The reigning world bronze medalist is a tad behind the eight ball in seventh place after an uncharacteristic fumble on her astonishing triple toe loop – triple toe loop combination, her big money move because of all the bonus marks she usually gets from it. As in perfect marks. This time, the extra 3.60 points she would have gained by doing it her usual manner would have given her 72.50 points, putting her in ….seventh place. But a closer seventh place.
Daleman did not let that miscue bother her the rest of the way behind the toughest women’s field ever assembled. Judges and technical officials loved her step sequence, giving it a level four, ladling out +2s and a few +3s. (Note: So impressive were the top eight skaters, they all earned level fours for all non-jump elements. Make a mistake at your peril.)
Before the Olympics, coach Lee Barkell said he doesn’t really think about the competition that Daleman is up against. There is no point at looking down when walking across a tightrope across a canyon. Daleman is aware of it, too. “The depth is incredible,” Barkell said. “On any given day, there could be five or six that could do well. That’s why we’ve got to make sure we stay focused and be in our own little bubble and at the end, just do our job. Whatever happens, happens.” 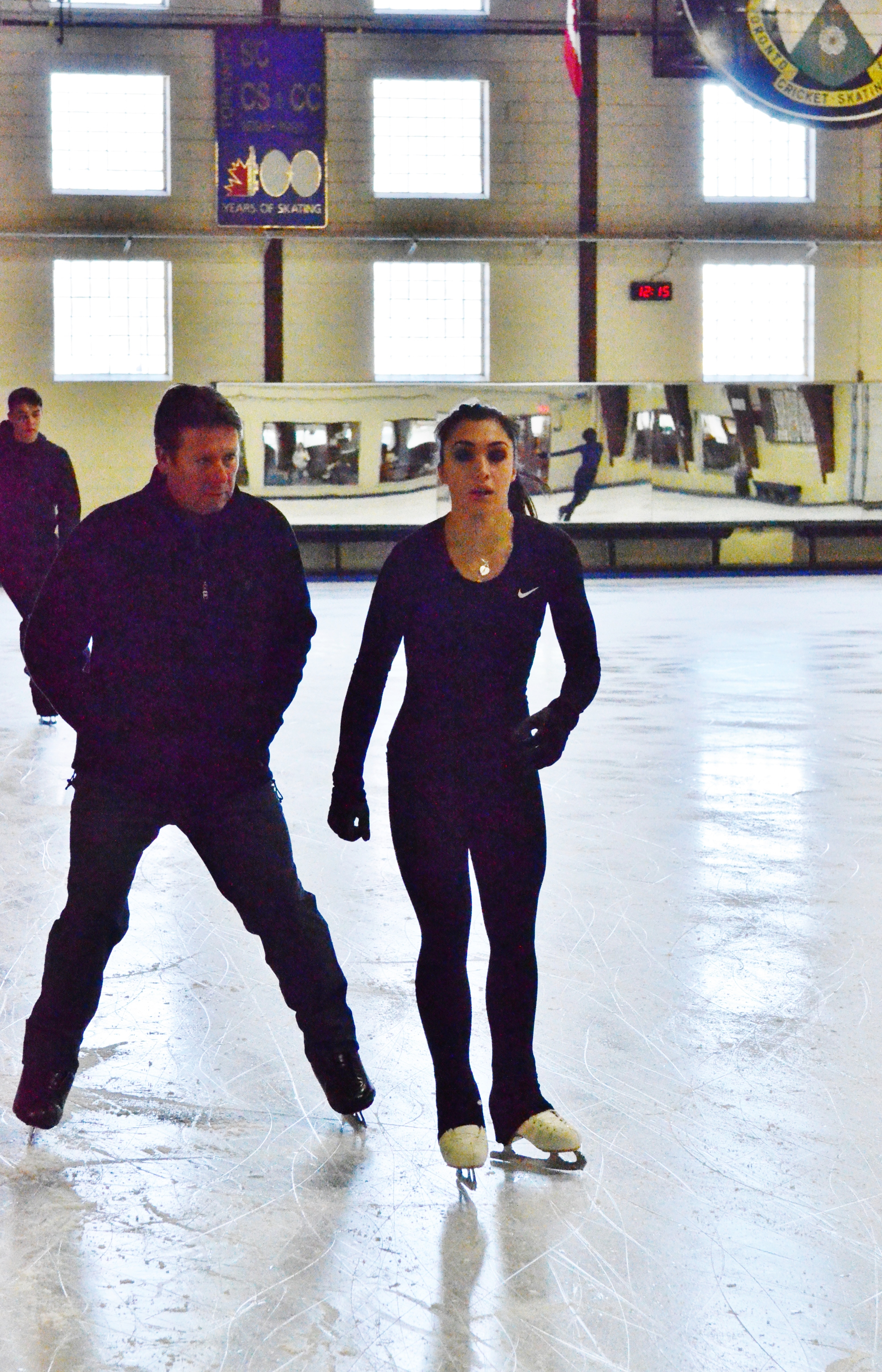 Barkell is a calm figure in the midst of a storm. He always has been. It’s the kind of guy he is. He’s the perfect coach for the bubbling Daleman, who brushes across a room like Hurricane Irma. They have developed a relationship that has been good for both. At the world championships last year, when Daleman finished third, she landed a triple Lutz in the long program, glanced over to the boards and saw both Brian Orser and Barkell, leaping up and down and applauding. It’s not unlike Brian Orser to skate the program himself on the apron, entertaining in itself, but it’s so unlike Barkell to do so.
“Finally!” Daleman thought, with Barkell in mind.
After last year’s national championships, Olympic bronze medalist and world champion Jeffrey Buttle – who also trained with Barkell – approached Daleman and said: “So what did you do to him [Barkell]? He never did any of that for me!”
“Sorry,” Daleman said.
“He never jumped up or did those nervous taps on the boards when I skated!” Buttle continued. “And now he’s doing all this.” 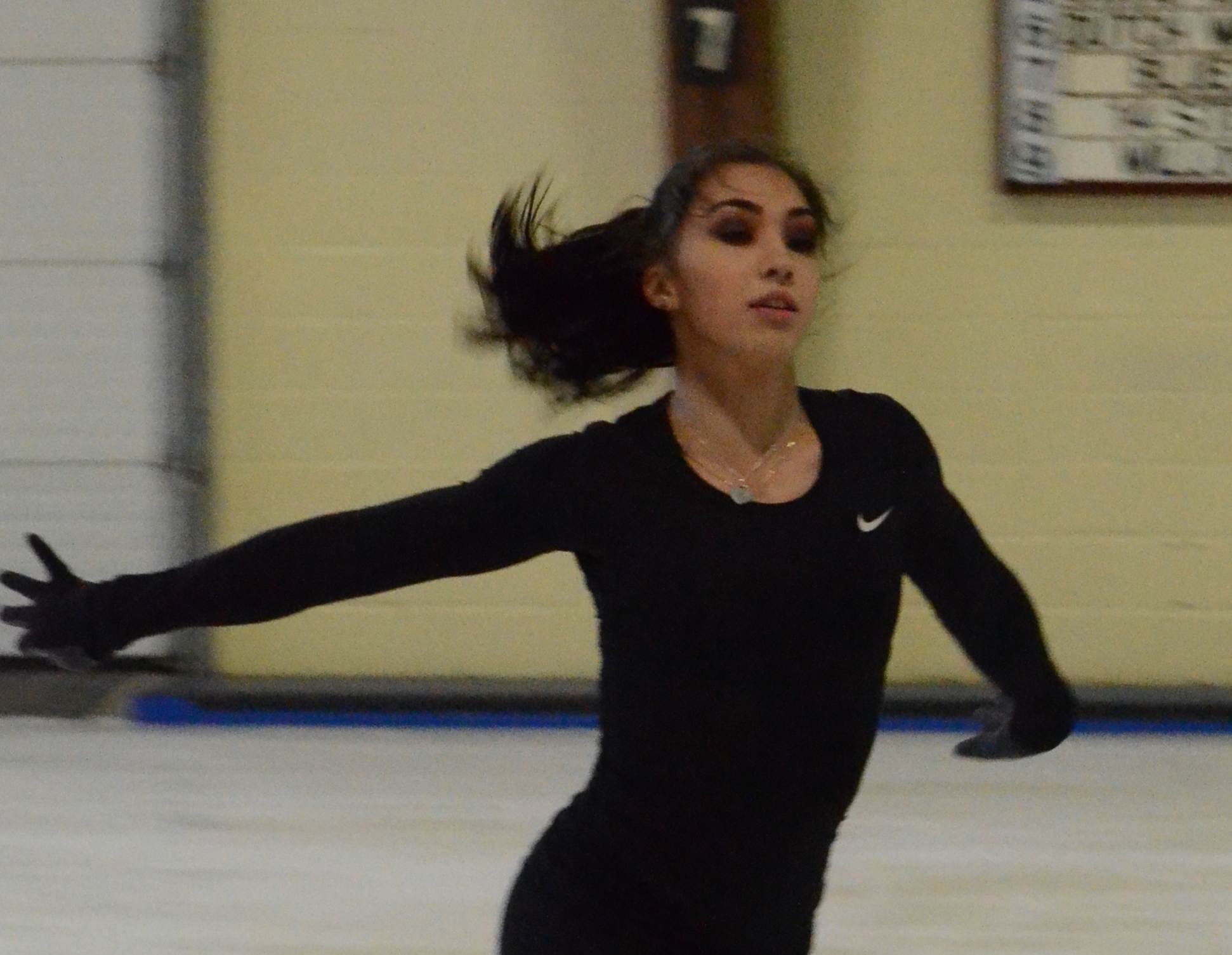 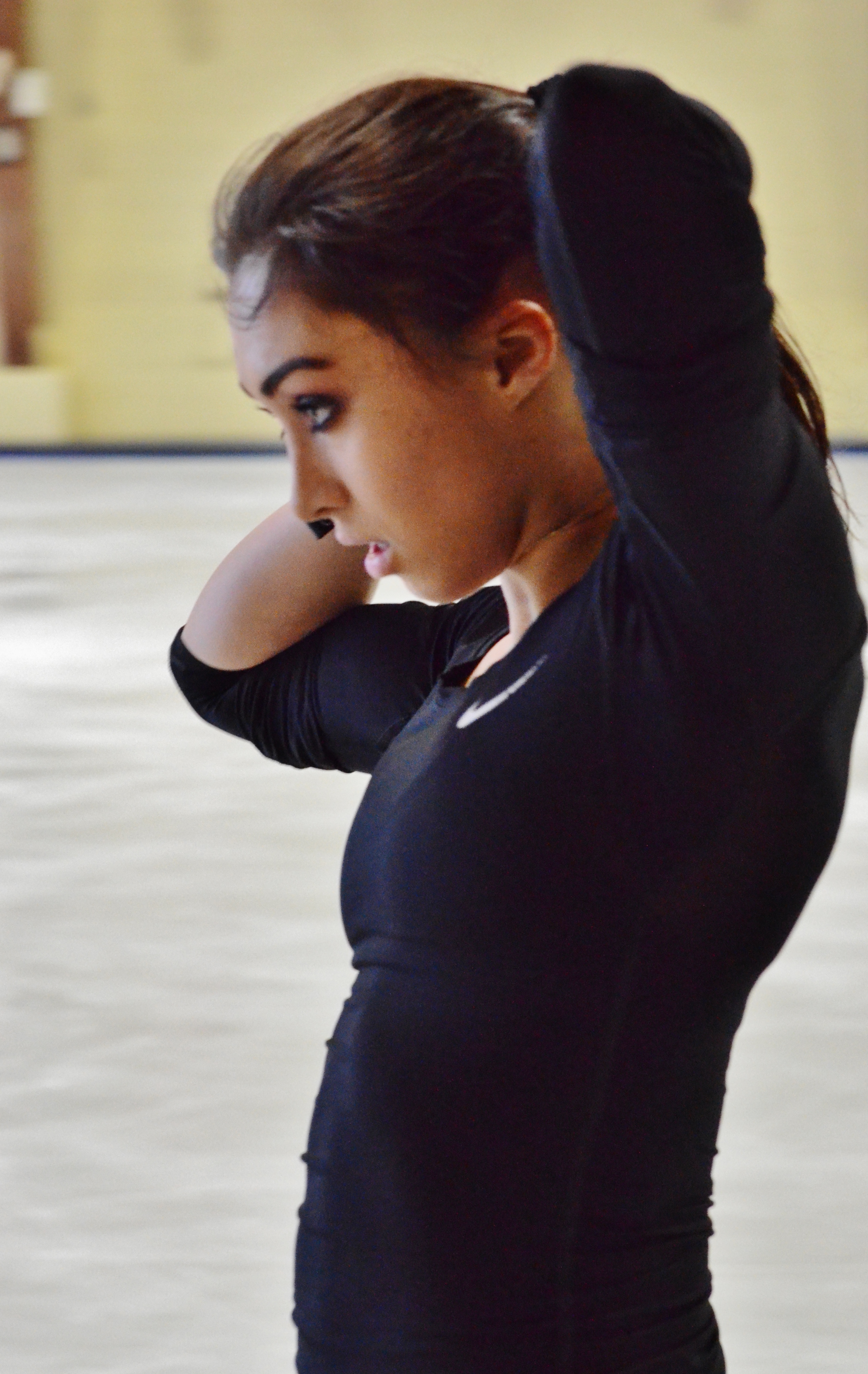 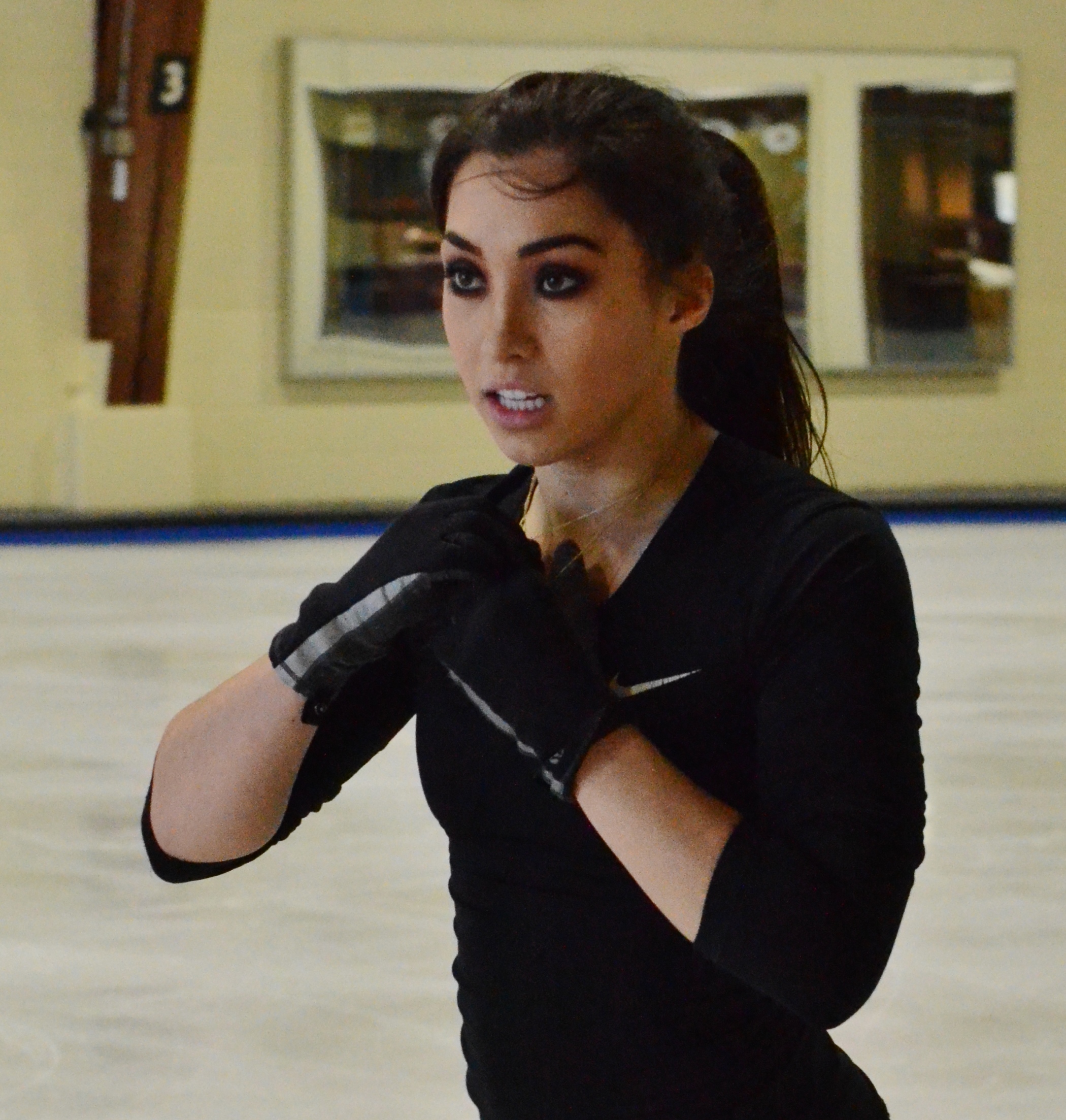 Barkell and Daleman constantly joke with each other. Over the past year, they have taken to playing Jenga when she is waiting to skate at a competition. It’s a testy little game, in which players build a tower, then try to take out blocks to place them on top without the tower falling. The player who causes the tower to fall loses.
The rule allows players to use only one hand to keep things steady. Daleman admits both she and Barkell sometimes use two. “When you have two very competitive people, it can end up very badly,” Daleman said. “You must like to lose.” But most of the time, Daleman wins.
Jenga has been a good strategy for keeping Daleman’s emotions in check. “It keeps the bad thoughts out, the extra little thoughts that you don’t need in your brain,” she said. Her job on the ice is to keep the tower intact.
And they joke. Sometimes, Daleman said, you get hungry at a competition. Orser or Barkell will say: “I could really go for a steak. Or a burger.”
“Really?” Daleman replies. “I have to go on the ice now and I’m thinking about a burger.”
Daleman is in her third season, training at the Toronto Cricket Skating and Curling Club with the formidable coaching team of Orser, Barkell and Tracy Wilson, who among other things, teaches skating skills. Couple that with progressively challenging choreography from Lori Nicholl, and Daleman is turning into a complete skater. She looked the part in her short program in Pyeongchang, skating powerfully to “Carmen” – music so often used by skaters, but this is Daleman’s “Carmen.” 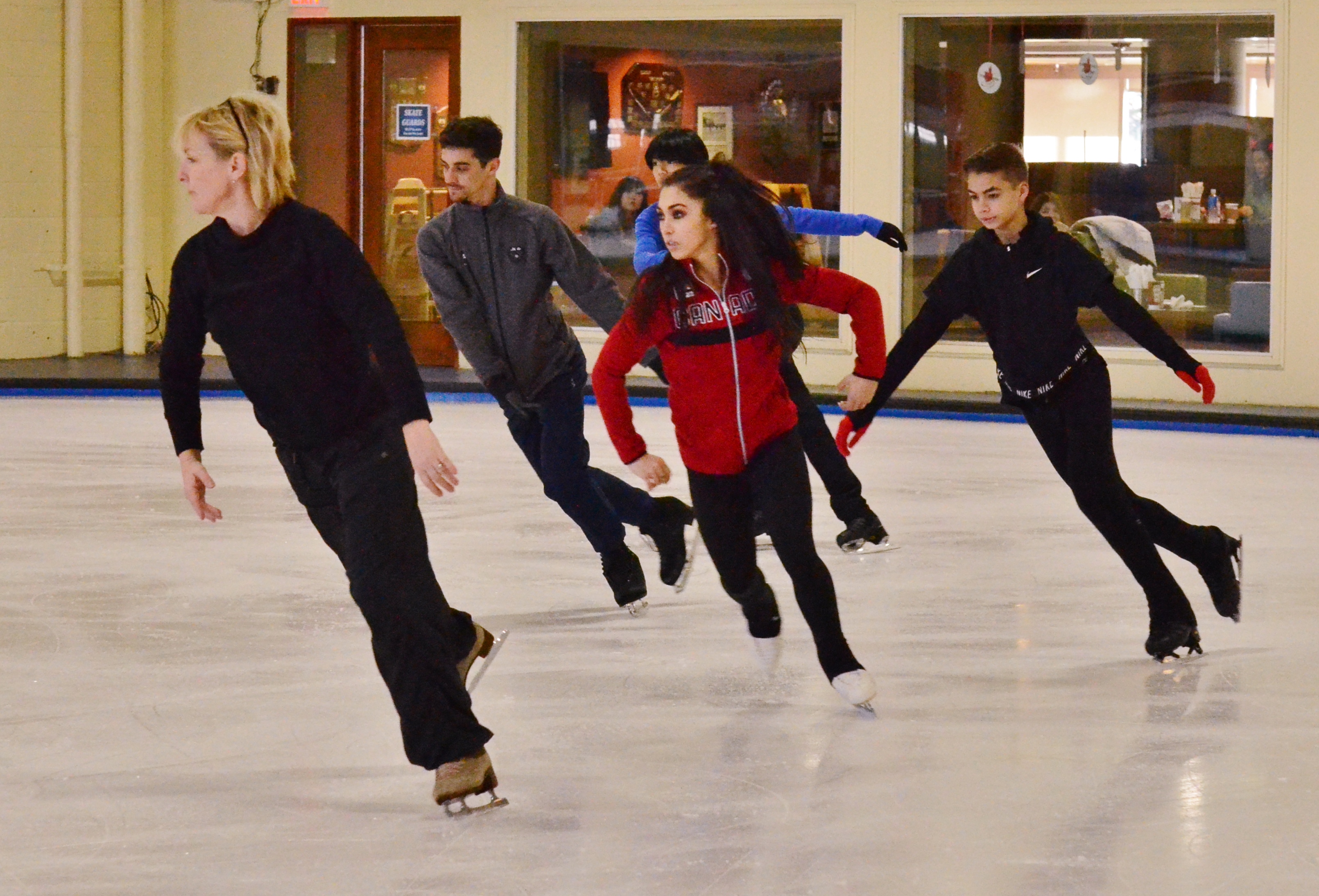 Both Orser and Wilson work with skaters on the stroking, balance and edge skills. “Often coaches will send me their students and it’s like they think it’s a quick fix,” Wilson said. “You say one thing and they say: “Got it,” and I say: “Actually, you don’t have it, because it’s hours and hours or repetition and of doing it a certain way for it to become muscle memory.”
Daleman is a quick learner, but even two-time world champion Javier Fernandez and two-time Olympic champion Yuzuru Hanyu would initially revert back to rudimentary skills while focusing on other things, like jumps and spins, under pressure.
“So when Gabby came, we said to her parents: ‘It’s going to take a year and a half. You’re going to see signs of it and then it is going to go.”
Now it’s just part of who she is. They saw quality skating skills last season and this year at the Canadian championships.
With Daleman and the rest of them, Wilson says it’s “really about patience and riding the blade. And not going after it too hard. You really have to have it under you. If you are trying to reach for it and go for it, that’s when you are working and you are not getting there. So what we try to do with these stroking classes, it just reinforces those things over and over again. And it becomes muscle memory.”
Wilson wants the skaters to tap into a feeling, not “a thinking.” Find the comfort place. “If they are feeling comfortable and balanced on the approach, they’ve got a really good chance of being successful in the jump,” she said. They work on awareness. And the idea that less is more. Fernandez has finally dialed in.
After Cup of China, Wilson flew to Spain and worked with Fernandez there. “He was working in this freezing cold rink on this hard crunchy ice on his own, and it was just really beautiful skating. “
She liked what she saw from Fernandez at the European championships, where he won his sixth title, because although he made a big mistake, he got right back into where he needed to be, not swayed by it. He was able to think on his feet and add a triple to another jump. 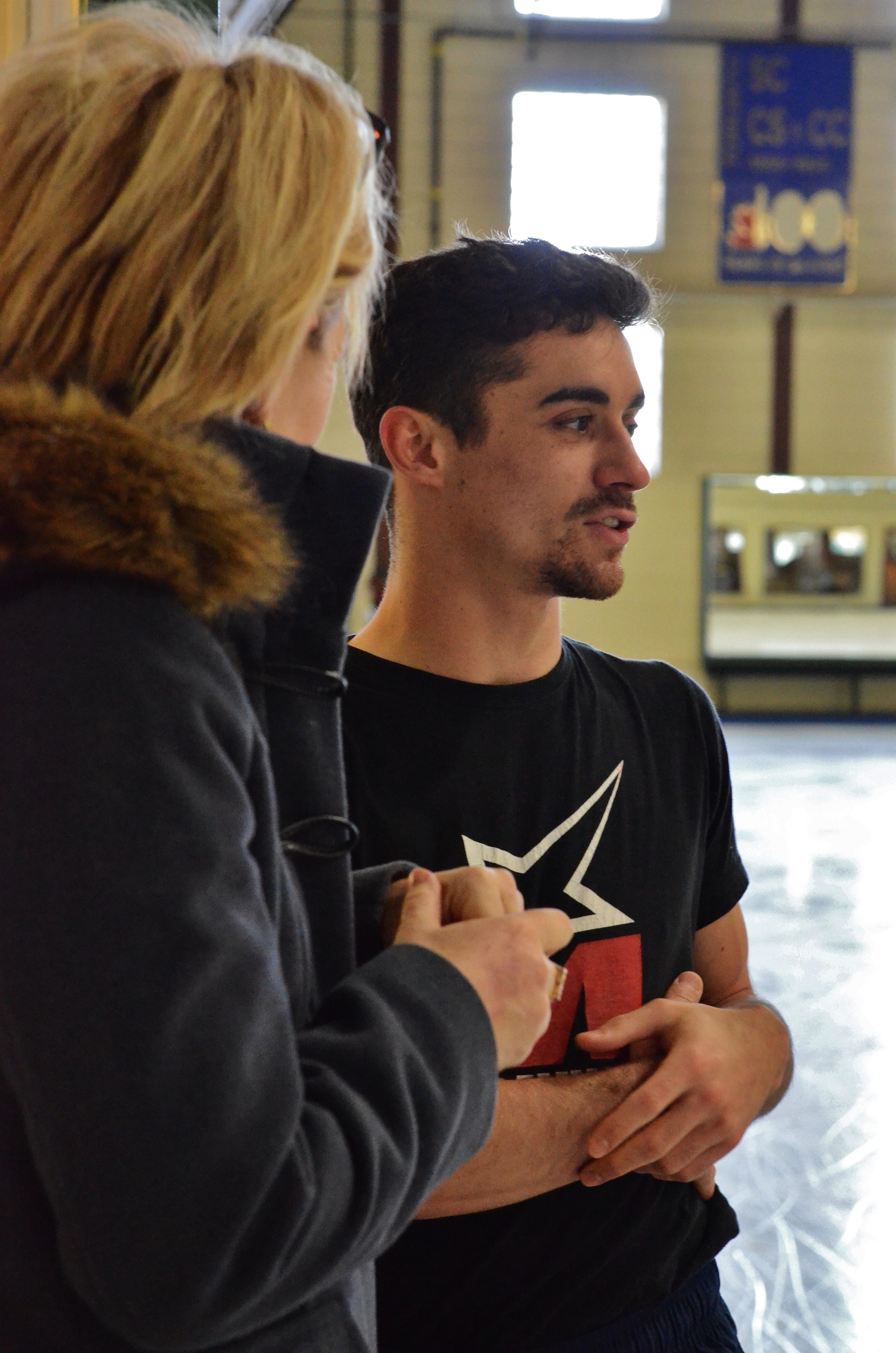 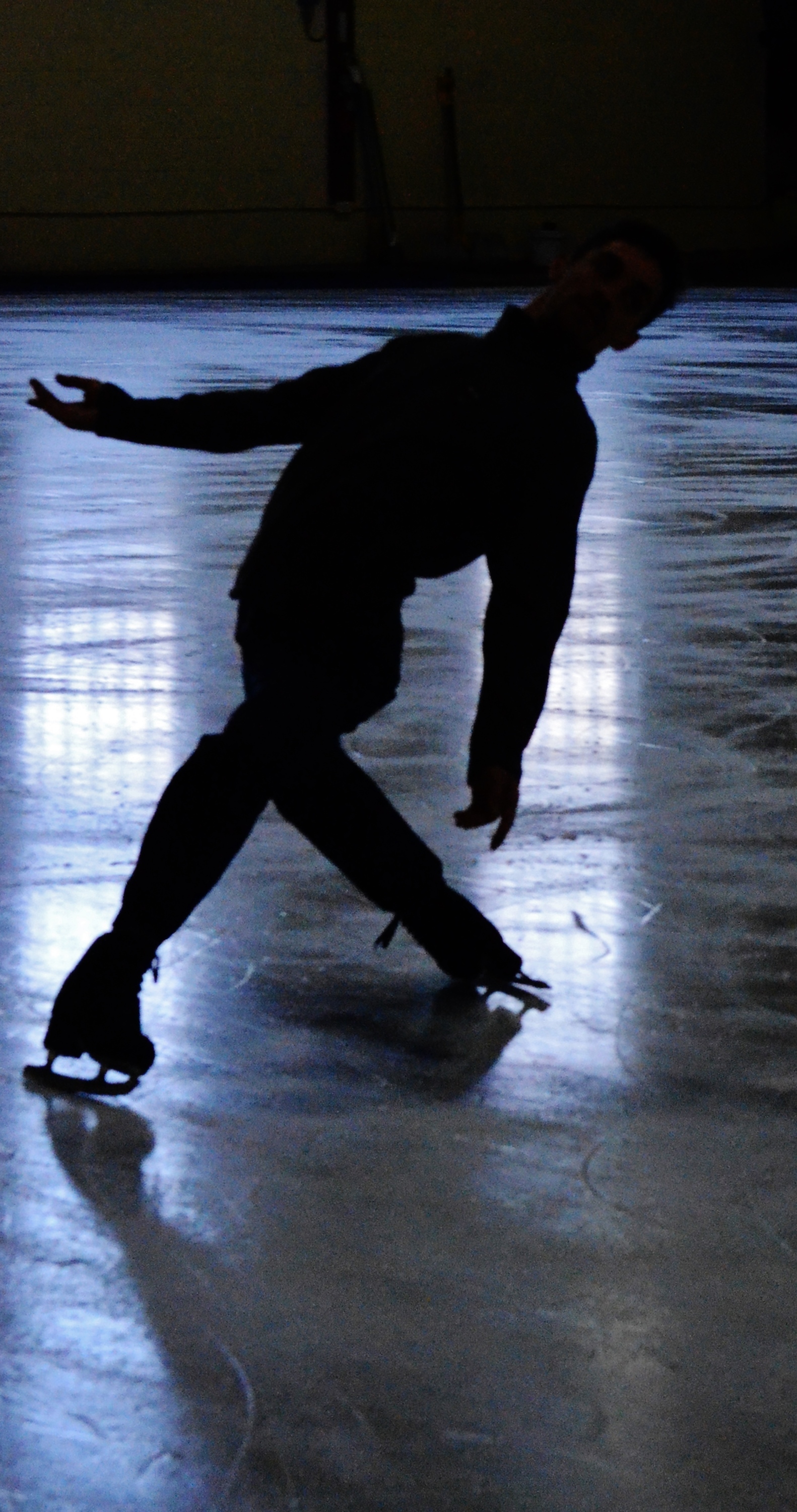 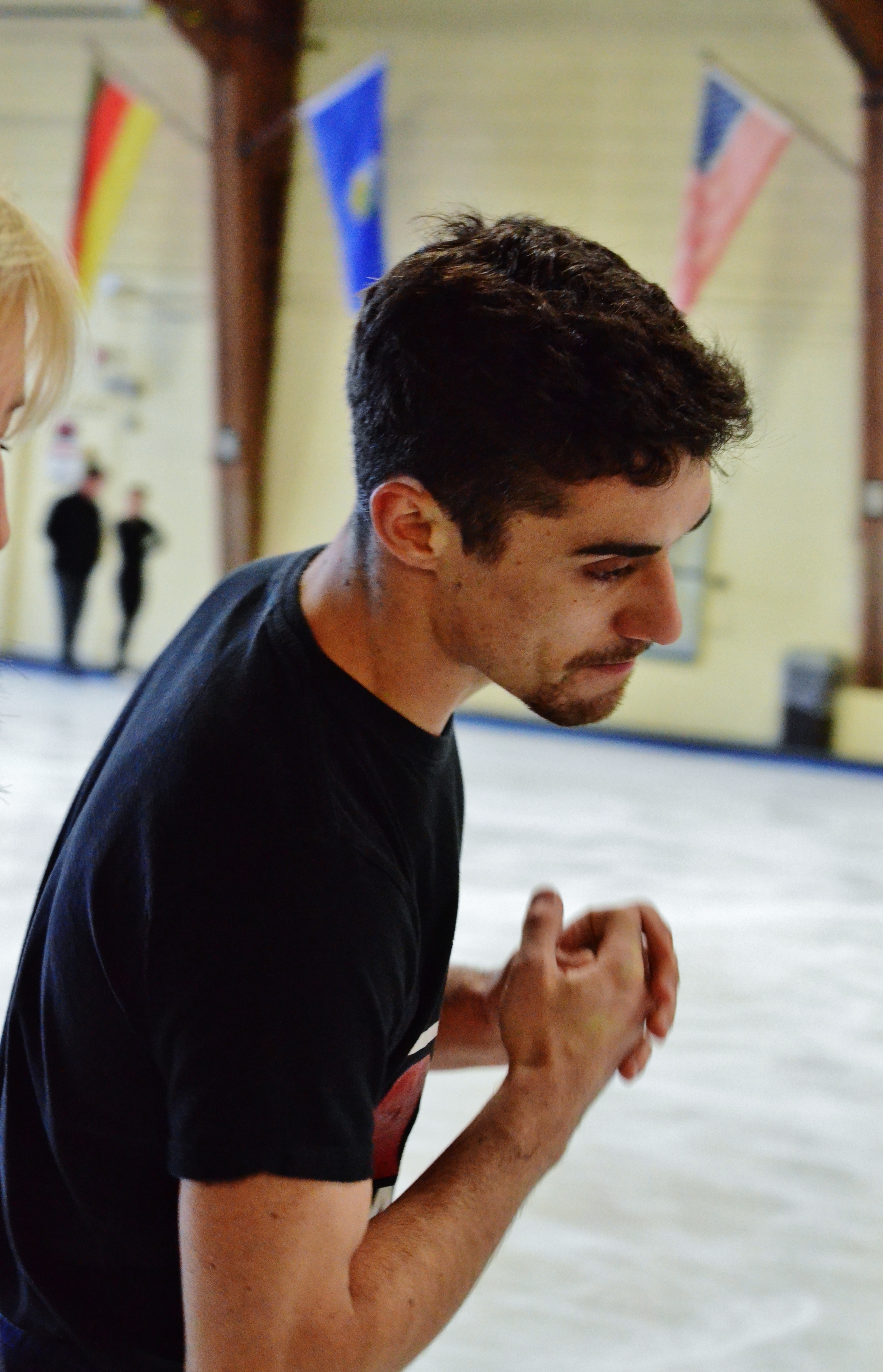 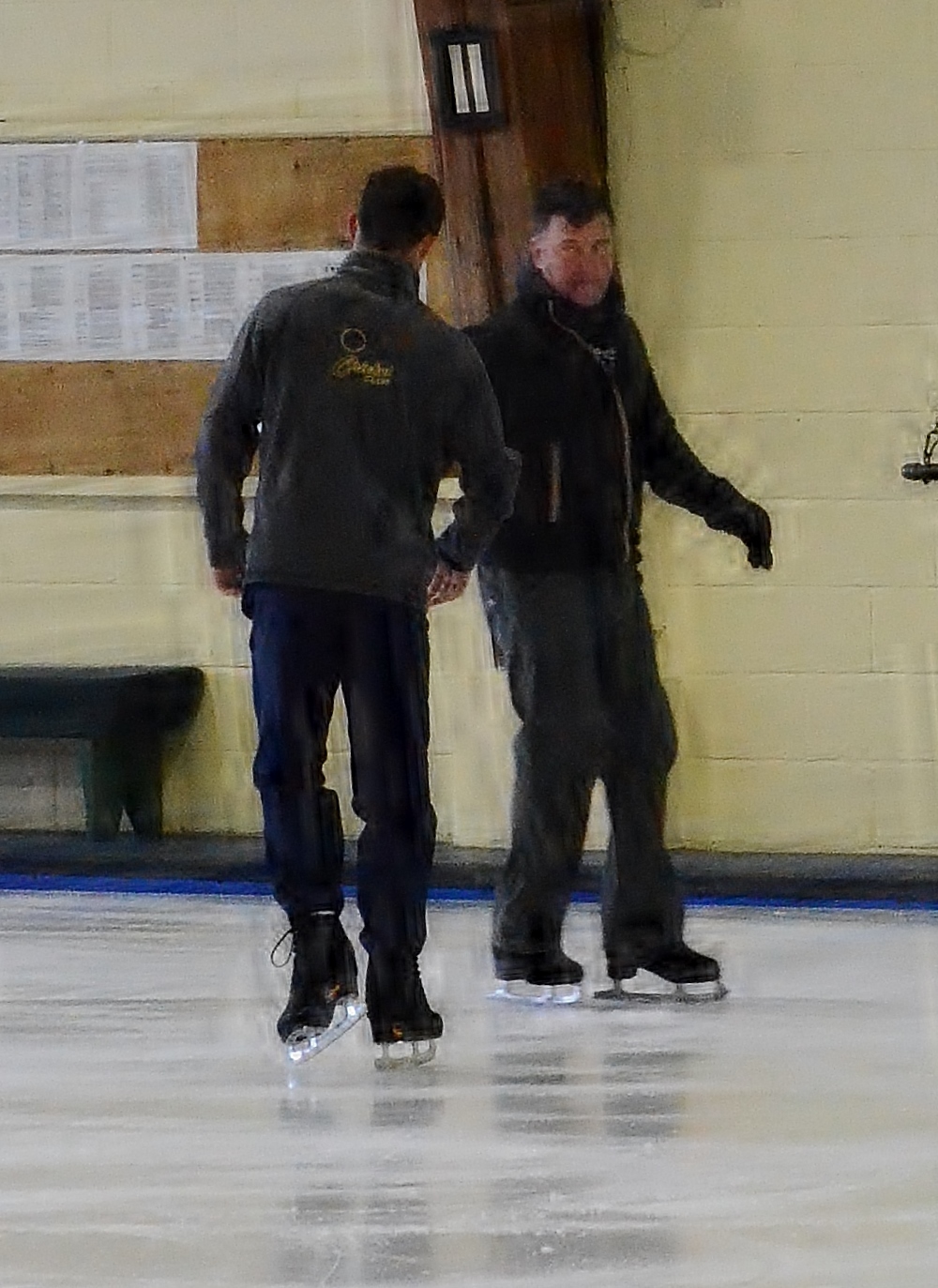 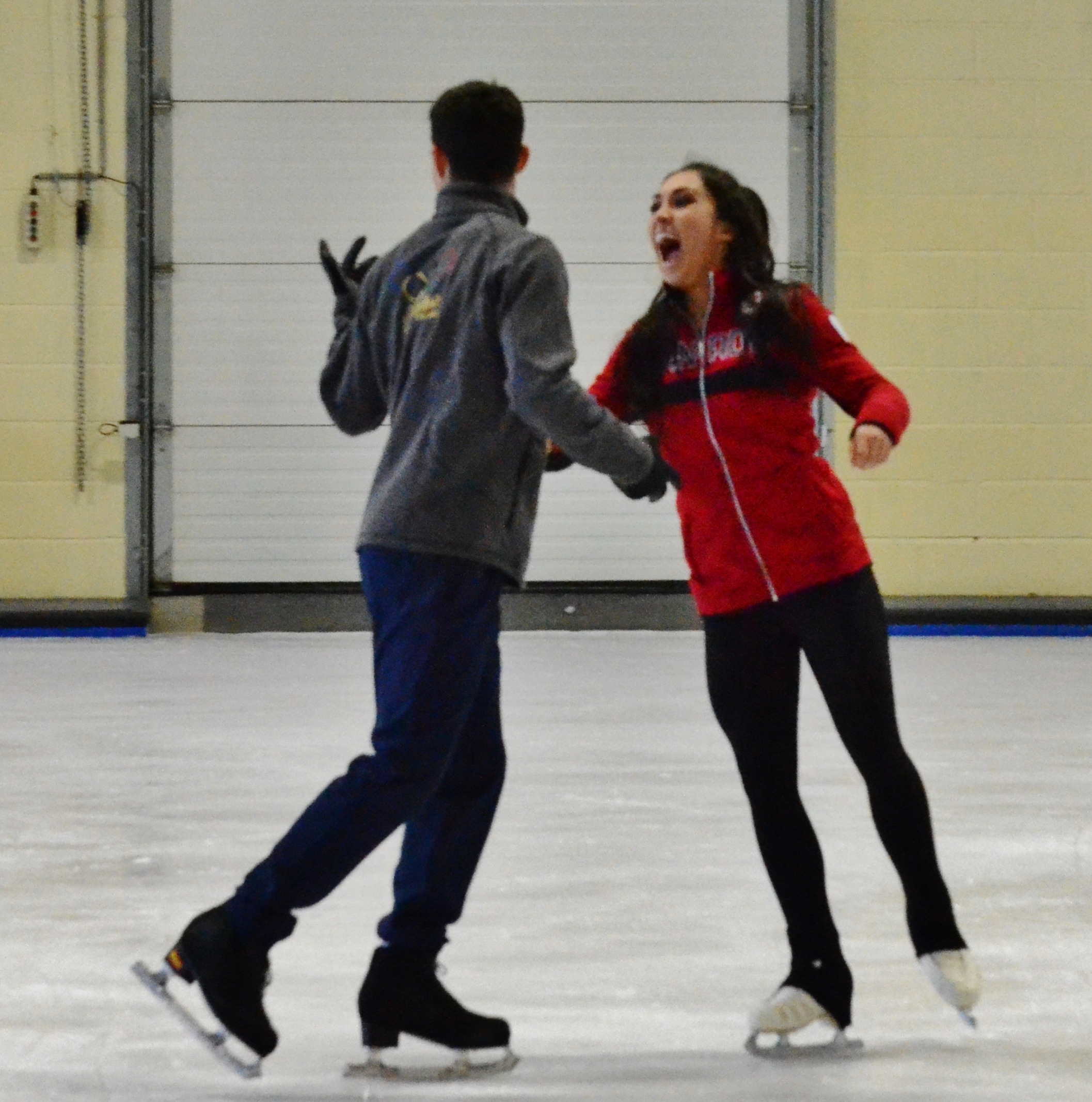 And this is what she tells Daleman: “It’s about being in it, not about being perfect. It’s being able to adapt.”
When you are in that zone where the moon and the stars align, you don’t put a foot wrong. “But the chances of this happening are not high, so you want to be prepared,” Wilson says. “You have to be in it. You have to be comfortable about being uncomfortable, and finding your way.”
Truth be told, Daleman is always finding her way in uncomfortable situations. She knows perfection does not exist. But that does not stop her.
“There are some countries that rather than try to peak every year for a world championship, peak for the Olympics,” Orser said. “They may lose a title in between, but it’s the Olympic year that is really important. We always see the greatest skating at the Olympics. That’s what we hope for. We hope we can get a medal by being better than everybody at their best. You don’t want to win a medal by default.”
All photos by Beverley Smith