You are here: Home / Uncategorized / A different kind of victory
Tweet
0 Shares

TORONTO
The atmosphere at the rink at the World Figure Championships last week in Toronto was hushed, quiet, subdued. Heads tilted downwards, eyes on the tracings. People huddled in the cold in the spare stands.
But this event and this pursuit – tracing figures with precision and intent – have given life to Christian Hendricks, a lanky skater from Tacoma, Wash. Trumpets could have been blaring, albeit silently, in this special arena of black ice.
Six years ago, Hendricks was in hospital in a wheelchair, doctors having told him he would never walk again. Diagnosed with full-blown AIDS in 2009, Hendricks waited to die. And waited. “I wasn’t living,” he said. “I was a very unhappy, struggling person.”
That is, until former U.S. national competitor Shepherd Clark talked him into competing at the inaugural World Figure Championships last year in Lake Placid, N.Y.  Finally, after an eon of darkness, a flicker of light fell across his brow.
His doctors were dead set against Hendricks getting up out of that wheelchair and engaging in a sport. They didn’t think his body would hold up. Hendricks says he has three terminal diseases: diabetes (most recently diagnosed), pancreatitis (not fixable and painful) and AIDS, to the point that he has only about 12 per cent of his immune system left to sustain him. He takes more than 50 pills a day. A couple of years ago, he weighed only  114 pounds, his cheeks hollow, his six-foot frame gaunt.
But six weeks before the Lake Placid event, Hendricks began to practice. The energy came from somewhere. From spirit. From will. Everything that he had left.
Ironically, figures were never his thing. “I was horrible,” he said. “Absolutely horrible and I hated them. Hated them!”
Hendricks was definitely a free skater, one of the first to land a triple Axel in competition as a junior, at a time when few senior men were trying the jump. (Brian Orser landed his first triple Axel as a junior and was the second man to land one, after countryman Verne Taylor squeezed out the first one in 1978.) Hendricks competed at four U.S. championships, one of his coaches being Frank Carroll. And he was a popular show skater, performing back flips, strong and confident. He worked as a producer and choreographer. When he found out he was HIV-positive in 1993, his show career eventually stopped.
Now Hendricks finds figures absolutely fascinating. “If I had understood those things when I was younger, I might have been a little better at them,” he said. “I never really knew how my blades worked. I just knew that they skated. And it’s made me aware of how important your equipment is.”

Most importantly, Hendricks does not compete to win medals. Last year, with little time to prepare, he set out to do the best he could. He did win a bronze medal last week at the Toronto event – against only two other competitors. He was a distant third, after falling flat on his back during one of the figures, a forward change loop, one of his best figures. The fall took some of the wind from his spirit, too. His entire goal last week was to skate clean. “Heartbreaking,” he said. However, he looked better this time, somehow managing to pack enough pounds to weigh 130, despite every medical problem he is up against.
Still, the fall and the slips and the touching down of the free foot where it shouldn’t, didn’t matter as much as his quest and his purpose.
“I’m here to represent all the people that were ever told they can’t, because I was told that I can’t,” Hendricks said. “I refused to believe that.”
He worked as hard as he could this year. But all that work did take its toll. He ended up in hospital in August for 16 days, trying to modify treatments to get himself back together. Now doctors absolutely approve of his quest. “They back me up. They do whatever they can to help me,” he said. “It’s really wonderful. It’s turned my life around.”
He’s become an inspiration to others. His fans open up to him, because they know he understands the most difficult of difficulties. “I’ve had that kind of disappointing news,” he said. He listens to their stories.
Now Hendricks has a purpose. It’s remarkable that he’s on his feet at all. He’s become a role model. He takes it very seriously.  He feels a responsibility to help others gather their forces to live, to work, to try, to ignore negative thought. Astonishingly enough, he laced up a pair of boots with free skate blades to take part in Gary Beacom’s Master Blades seminar one night at the championship. He can’t remember the last time he put them on. He floated about the ice, trying as many Beacom-like movements as he could, taking the microphone at one point to offer advice, and offering encouragement to youngsters in the group. He had experience. He had knowledge to pass along, too. 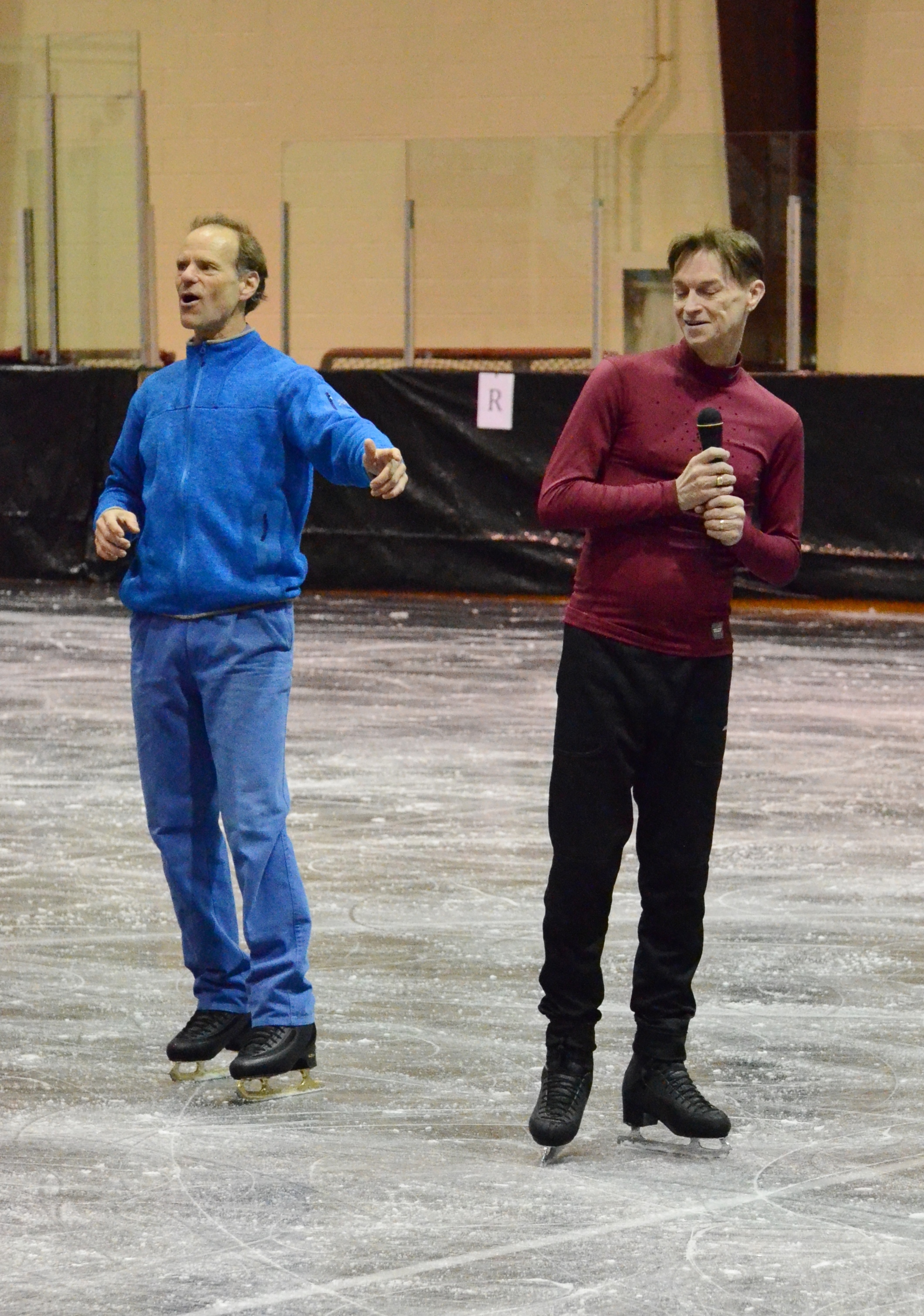 Most gratifying: Judge Trixi Schuba, a figures master who won the 1972 Olympics, singled out Hendricks, “kidnapped” him and asked him to sit at the judges’ table during the opening night gala at the Toronto Cricket Skating and Curling Club. He found the experience “enlightening.” And heart-warming.
Hendricks has inspired many people with his quest, and he’s been inspired by those who have stepped up to help him. Last year, he couldn’t pay the $500 entry fee to the first world championship, so World Figure Sport Society president Karen Courtland Kelly found him a sponsor to get to Lake Placid.
This year he’s had to rely on a foundation he’s set up to raise money through the sales of T-shirts and hoodies, and through a GoFundMe account.
His personal campaign is called the Infinite Love campaign, with the shirts emblazoned with the infinity sign. “”That’s how I feel about skating, how I feel about my friends and my fans,” he said. “I’m skating the infinity sign because I do have an infinite love for skating, and this really has made me happy again.” This campaign is not going to make him wealthy.
It was touch and go whether or not the GoFundMe campaign would generate enough money to get Hendricks to Toronto this year. People gave what they could: $30 here, $100 there. One anonymous donor gave him $2,400. Another, also anonymous, donated $4,000. And so he made it to Toronto. It took him three days from Washington State to get to Toronto, what with flight delays and cancelled flights. But to Toronto he came and he laced up his skates, happy, a spark in his faded blue eyes.

Hendricks didn’t have his own figure blades, which are flatter than free skate blades and which have fewer toe picks. There aren’t exactly a lot being manufactured these days, since compulsory figures were dropped from International Skating Union competitions 25 years ago. The World Figure Sport Society encourages people to use what they have, even free skate blades. But women’s competitor Tracey Robertson-Hanford, a Canadian novice champion and junior bronze medalist, while skating alongside Brian Orser and Elvis Stojko in Orillia, Ont., with coach Doug Leigh managed to find an Ottawa man who had bought up all the old figure blade stock and got herself a pair, started training in November and finished fourth in the women’s category. She found that the rocky nature of free-skate blades made the tracing of figures difficult.
Hendricks found another way. The mother of a friend who died of AIDS gave him the young man’s blades that he used to pass his eighth gold test. “She was just so proud that Rickie [Scarry] was a part of the world championship in any way, shape or form,” Hendricks said. “Everybody has gone beyond the call of duty for me.”
When Hendricks finishes using those blades, he plans to shower them with gold leaf, frame them in a shadow box and send them back to Scarry’s mother.
Hendricks has a different definition of winning, indeed.