You are here: Home / Uncategorized / The Waddell Brothers: an extraordinary test
Tweet
0 Shares

They have the same eyebrows. The same eyes. The same smile. Same hair. Bruce Waddell is the Mini-Me to his older brother, George. Teenagers both, they are separated in age by three big years. 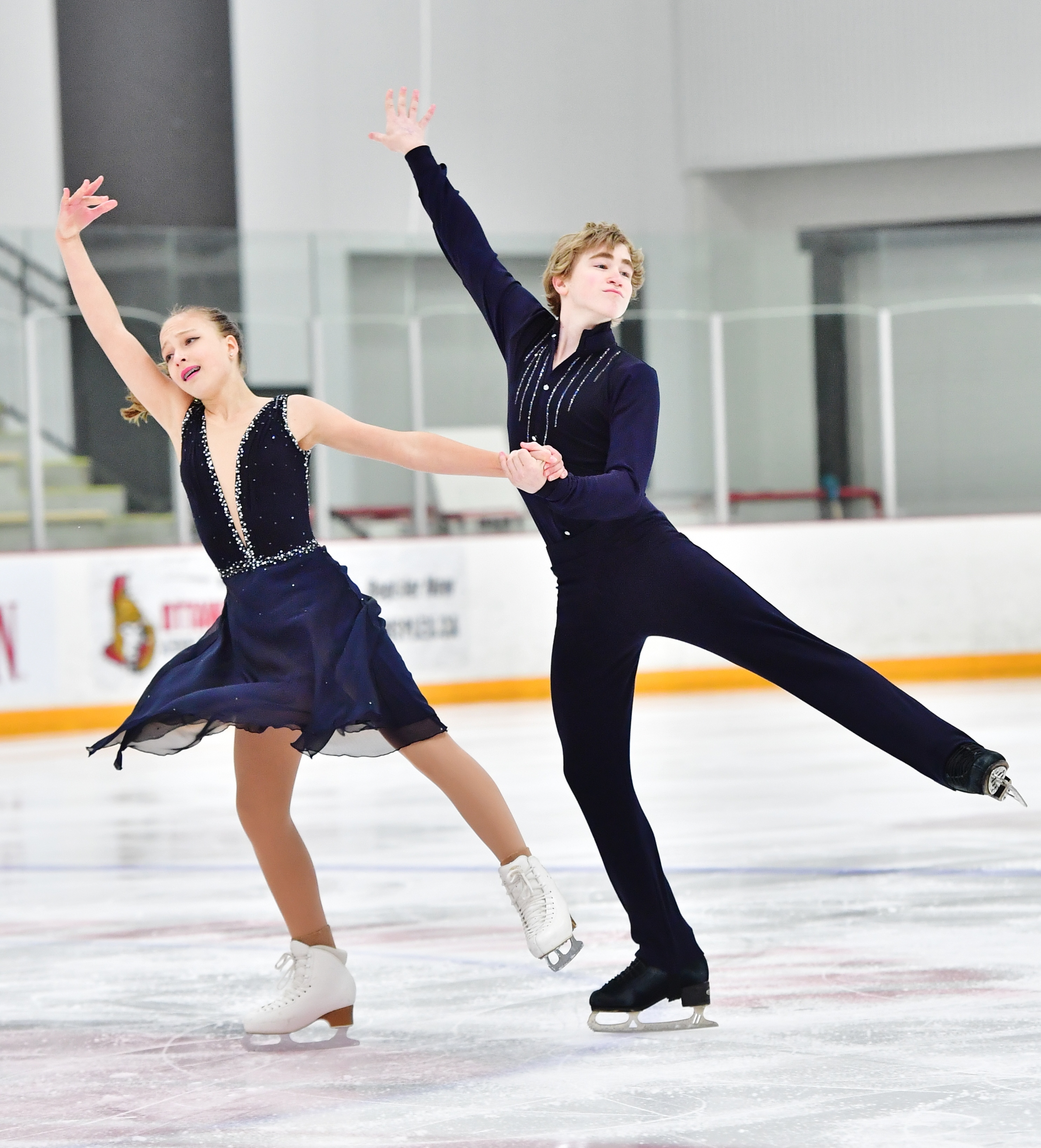 George Waddell and Sabrina Bedard (Skate Canada photo)
They are both ice dancers. They both are musicians, pianists. They both played high-level municipal hockey up to a year ago. (And why not? They are grandsons of the venerable National Hockey League star Red Kelly – now 90 years old.) They have traveled so many of the same steps.
But nobody on the planet would ever have dreamed that they would have ended up competing against each other while skating for different countries at their first Junior Grand Prix event in Brisbane, Australia last week. (They aren’t the first to do this. American born dancers Cathy and Chris Reed finished 18th at the 2010 Olympics while skating for Japan. Their sister, Allison, skating with a partner from Georgia, finished 20th at the same event.)
They were neck-in-neck in this brotherly rivalry, waged so far from home. George, 18, and his new partner Sasha Fear, finished seventh with 110.32 points. Bruce, 15, finished just ahead of him in sixth with 113.25 points. The younger Waddell skated with his partner Natalie D’Alessandro, who at 13, was the second youngest woman at the event behind a Russian singles skater. Both efforts were remarkable, all considered.
While Bruce competed for Canada, George skated for Britain.  George’s switch in allegiances happened all very quickly, so quickly it would make your head spin.

Both of course were born in Toronto. Both learned their early dance steps from former British dancer Andrew Hallam, who now coaches at the Toronto Cricket Skating and Curling Club. George has a twin, Charles, who danced, too. When Charles decided to hang up his skates, George’s partner had quit. So George skated with Charles’ former partner, Victoria Oliver. For seven years, Oliver skated with a Waddell twin. There are many tight twists in this story.
A year ago, George moved to Montreal to skate with Sabrina Bedard in the school of Marie-France Dubreuil and Patrice Lauzon. His coach and choreographer there was former French skater Romain Haganauer, who had taught Hallam in France. (Haganauer moved to the Montreal school in July 2014.)Haganauer also choreographs routines for D’Allessandro and Bruce. All in the family, right?
George found himself without a partner at the end of last season. What to do? He had been accepted into the commerce program at Queen’s University in Kingston, Ont. – not an easy task – and he had already deferred his start by  a year when he moved to Montreal. He decided to try out with a few dancers, just to see.
But on a weekend in April when he came home to Toronto from Montreal to attend the funeral service of much-loved Skate Canada volunteer Barbara Rogers, things sparked quckly to change his life. He had taken the train home on a Thursday night. On Friday, he got a message to call Haganauer. “You need to call me between 7:30 and eight,” the message said.
The call? Would George be interested in skating for Britain? If he wanted to consider it, the parent of the British girl, Sasha Fear, was to call at that time. If he wasn’t interested, no call necessary.
“Oh yeah, I’d consider it,” said George, who had finished seventh at the Canadian junior level last season. The Waddell family already knew the Fear family. Fear was an accomplished dancer, who had competed for Britain at the world junior championships last season. She and her older sister, Lilah, a British dance champion, had trained periodically at the Cricket Club with Hallam, but she sprouted up like a weed and outgrew her partner. Her parents were Canadians who had moved to Britain. Both Sasha and Lilah had dual citizenship. And George? He had a British passport, just like all of his brothers. The Waddells have known the Fears for a very long time. And guess what? Haganauer had already coached Sasha with her previous partner.
“George has always had a British passport because my husband is from Glasgow,” said George’s mother, Casey Kelly, an international judge for Canada. “When they were babies, we got them all British passports, because we thought for travel, it would be great. And who knows, maybe they would want to live there, or go to school there. But we never thought it would be used for anything related to skating.”

George and his family discussed the opportunity over the weekend. On Monday, he returned to Montreal to pack. On Wednesday, he was in Britain. On the following Sunday, members of the British skating association showed up to have a look at the new team. They have been together only since May.
Another bonus: George had never skated internationally for Canada, so there would be no one-year wait for him to switch countries.
“I knew she was a good skater,” said George. “I knew her from before. I thought it would work well, so I just went over there. And it worked well, so I just stayed over there.”
George and his partner had to get international minimum scores and they did that at an event at Lake Placid. A few weeks ago, they won a competition in Sheffield. With only five teams in Britain competing for international spots, George wasn’t surprised when they got Brisbane.
George is happy in London. He trains at the Alexandra Palace in north London, an impressive old structure with a beautiful rink built in 1990 and a nickname: Ally Pally. “Everything is pretty close to us,” said George, who shares a flat in Kensington with Lilah’s partner Lewis Gibson. The rink is close by.
And he has relatives in the country. His grandmother Waddell is 98 and living in Edinburgh. He can see her a lot, now. He has an aunt that is a 40-minute train ride away. (He’s had dinner there.) He has cousins in Manchester. When he competed at Sheffield, he had a little cheering section. (Waddells, unite!)

“It’s an incredible opportunity,” Kelly said. “The family has been so warm and welcoming and it helped that he knew them beforehand.” Because Sasha is only 15, they must train in England where she goes to school. When school is out, they will go to Montreal with Haganauer. Karen Quinn, who competed at European championships for England and did a four-year stint with Holiday on Ice in Europe, looks after the new team at the Ally Pally.
When George and Bruce met in Brisbane, they hadn’t seen each other in months. “I was impressed with his [Bruce’s] skating,” George said. “They have really improved.”
They hadn’t always skated even at the same sessions in Toronto because Bruce had been at a lower level. Perhaps three times a week they were on the same ice. And they had always had a friendly brotherly rivalry. “We compete with each other in everything,” George said. “He was always better than me at free skate, so I stopped doing that. [Bruce also skates singles, as does D’Alessandro. But to do it, he had to give up hockey. George kept the hockey but dropped singles skating].
“I guess we were pretty close at this competition,” George said. “That starts it off and we’ll see what happens. But we’re not bitter with each other.”
“They certainly have a friendly rivalry, which they would have developed in the days of hockey,” Kelly said. “They would do pickup hockey too. And they certainly wouldn’t go easy on each other. They hope the best for each other, but they’re not going to give an inch. That’s part of the fighting spirit.”
Kelly never dreamed that her two sons would ever compete against each other, much less for different countries. Bruce seemed to be at another level, but in his three years with D’Alessandro, he has spun up the domestic dance ladder with alacrity. Two years ago, they were pre-novice national champions at first crack. Last season, they won the novice title in their first try. This is their first year at the junior level and hadn’t expected a Junior Grand Prix assignment at all. The fact that they got one shows that Skate Canada feels they have promise.
George and his partner had the Brisbane assignment first. Suddenly, Bruce and D’Alessandro were going, too.
Truth be told, Bruce has missed his older brother. In Brisbane, they hung out a lot off the ice. On the ice, they paid no attention to each other as they warmed up. George was more focused at the sight of American and Russian dancers whizzing past him at great speed. As an older, more experienced team, Fear and Waddell have more power and speed than the younger team, but D’Alessandro and Bruce have built up a togetherness over three years. Fear and Waddell match quite well. They both have long legs, and power. She is still growing, but George stands about six feet tall.
In Brisbane, Bruce and D’Alessandro were part of a Canadian team. George and his partner were the lone Brits.
Back home in Toronto, parents watched online. Even Red Kelly and wife Andra, a former figure skater, watched too. The first night, they stayed up late. The second night, because the Waddell brothers competed later, Red and Andra set their alarms to wake up later.
They all noticed Bruce’s wink – a new move – at the beginning of their short dance. “My favourite part,” said a cousin watching from Scotland “was that cheeky wink.”

“I wasn’t expecting it,” Kelly said. “I thought it was funny.”
Both teams have easy relationships with their partners. Bruce and his partner fall in like brother and sister.
They were all on the same flight back from Brisbane to Vancouver. George and Bruce sat together on the plane for the long flight back.
And next? George and his partner have already been assigned to a Junior Grand Prix in Minsk on Sept. 20 to 24. It’s a tougher field, and a bigger one too, with 17 entries.
It’s not clear that the young newbies, Bruce and D’Alessandro have another assignment. But they are on the substitute list for Minsk – with five other Canadian teams. Should the Brothers Waddell end up there together again, it will be a fascinating rubber match.