You are here: Home / Archives for Gabriella Papadakis and Guillaume Cizeron 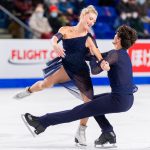 The long and winding road isn’t quite finished yet for world bronze medalists Piper Gilles and Paul Poirier. But this year they are celebrating it. And skating to it. Using the Beatles music to it, they won a gold medal at Skate Canada on Saturday. It’s an important gold medal: it’s their first Grand Prix […]

What do you do for an encore, after you’ve won a bronze medal at the world figure skating championships after years of toiling in the shadows? When you’re Piper Gilles and Paul Poirier, you go out and nail the highest score of the season for the rhythm dance at Skate Canada in Vancouver, in front […]