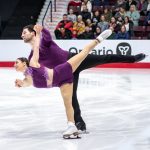 Early in the season, Deanna Stellato-Dudek and Maxime Deschamps seemed to have the world in their grip. After finishing second at Skate America and winning their first Grand Prix gold, in France, and thus qualifying for the Grand Prix Final for the first time, they appeared a lock to win their first national title […]