It’s as if Patrick Chan is sweating his way through a nightmare. Just as he is about to grasp the golden ring, it slips out of his reach. He’s running as fast as he can but it feels like slow motion, as his opponents pull away. We know how it feels, when the bottom suddenly falls out of a dream.
He says that feeling was most true last season, when he made his comeback after a couple of years of doing shows and was taken aback by the new crazy quad world. He had thought that Olympic champion Yuzuru Hanyu had been hitting the limits of men’s skaters at the Sochi Games. How wrong he was. Hanyu, with his little hips, and inherent ability to rotate like a top, was only starting to push it. And he pushed it more while Chan was gone. 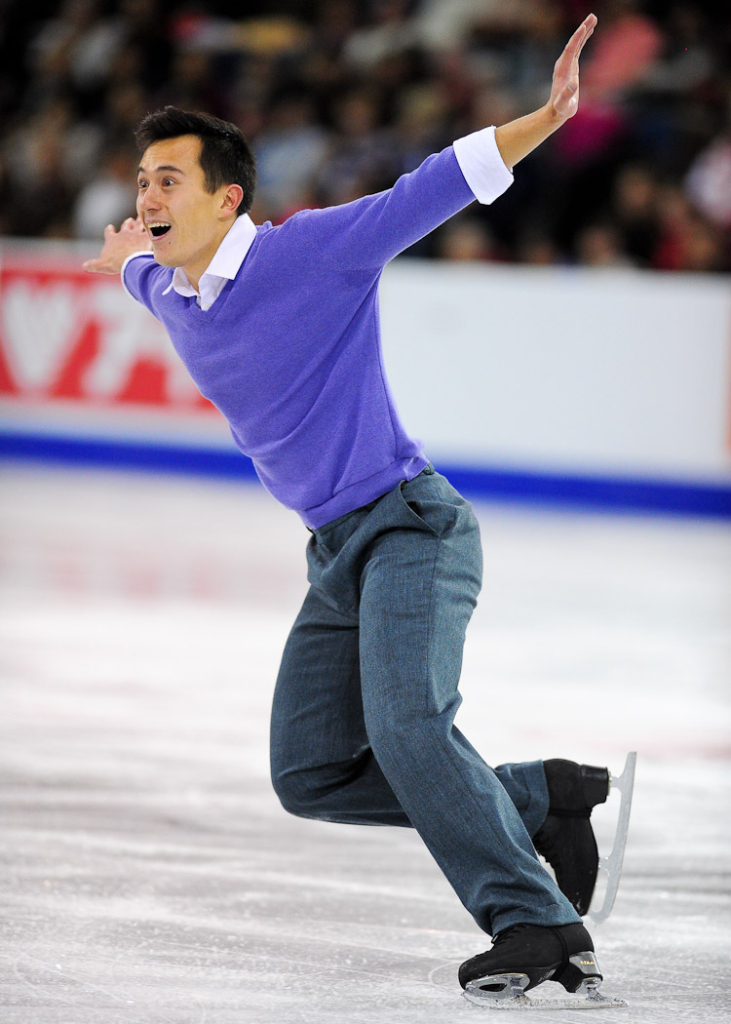 Now Chan feels as if he’s catching up, sort of. He’s had to. He originally never dreamed that he would be including a quad Salchow in a program, but the headlong race to the quad in the men’s event has driven Chan to a new level. However, even with the extra quad, he’s going to have to skate clean short and long programs to make a dent on his competitors,  because he still falls short of the technical arsenal of the others. Although Chan has the best skating skills in the world, it’s the quads that plop the biggest points into the basket.
So at Four Continents last month, Chan found himself watching the top three skaters of the long program while sitting in the green room – that place where the ISU puts them so television cameras can record them squirming – and it changed his strategy for the world championships in Helsinki, Finland next week.
“It was mind-blowing, what these guys were doing, technically,” he said.

It was also interesting for him, just to watch them skate. He never had. He’d always been in the lineup, perhaps after some of the top three. He had never watched their programs from beginning to end, all three of them: Hanyu, Nathan Chen, Shoma Uno.
“It was great to see,” he said. But what he saw was that he was “at a great disadvantage technically.”

Winner Nathan Chen – with whom Chan trained briefly at the beginning of the season – squashed his opposition with five quads and a stunning final score of 307.46, almost 40 points more than Chan. Hanyu had stumbled in the short program but felt a moment of triumph after his long and a frothy mark of 303.71. But he skated before Chen and the wind went out of his sales when he saw the unassuming, matter-of-fact American kid lay it down. He doesn’t like to lose. At all. Current Japanese champion Shoma Uno fell twice and dropped to third with 288.05, still about 20 points more than Chan.

“It was eye-opening,” said Chan, who fell on two of his three quads in the long. Chan finished fourth in the free, fourth overall. On the outside, looking in. Believe it or not, Chan is the reigning Olympic silver medalist from 2014. Hanyu had skated badly, leaving the door wide open. Chan had skated worse.
Yes, Chan felt frustrated about this most recent test. The results made him want to hold a meeting with his coaches, immediately, on the spot, to figure out how to combat what happened. Eventually they did meet, and the week after Four Continents, Chan flipped around some of the elements in his long program, and changed up some combination passes to improve his chances for next week.
Chan keeps his opening tour-de-force, the quadruple toe loop – triple toe loop, that he enters with the speed and drama of a freight train. The quadruple Salchow becomes the second jump now instead of the third. This, his newest jump, which has evaded him this season in many competitions (as it did at Four Continents) switches places with the triple Axel.
The triple Axel, now third in the parade, gets a facelift because it will become a jump series: a triple Axel – loop – triple Salchow. It had been a jump combination with a triple toe loop in the second half of the program.
Now, Chan will turn a lonely triple Lutz late in the routine into a triple Lutz – double toe loop  combination (now his second-last jump), great for second-half points. There will be a sole triple Axel and a quad toe loop in the second half, too. Finally, there will be a triple flip and a tripe loop.
“We gave it [the quad Salchow] as many chances as we could to see how consistent the layout was,” Chan said. “But it didn’t’ seem consistent enough. We thought it was logical to try a different order.”
“And I decided that I’ve lost out on quite a few points just on not having completed enough combinations,” he said. “I didn’t fill my combination bracket.”
The new arrangement will give Chan slightly higher point totals, but that wasn’t really the full intent of the change. “It was more just to allow myself a new approach and maybe the possibility of having the jumps become more successful” in the heat of competition, he said.
Couldn’t he really be doing something else with his time, instead of chasing something that younger skaters are increasingly capable of? He’s a bright guy. He doesn’t need this craziness.
“We are at a point now where it’s crazy,” he said. But he admits, it’s true. It’s hitting the nail on the head to say he could be opening up a rink in Vancouver to teach skaters or to become part of the finance world, or to do anything. Chan said he’s had many more options for his future opening up to him in the months leading up to the Pyeongchang Olympics than he did before Sochi.
But hope springs eternal. The battle doesn’t halt Chan. It spurs him on. His new sports psychologist has set things in perspective. “It does get to a point where it’s frustrating, where I’m running as fast as I can, but they are just creeping away from me,” he said. “It doesn’t help seeing other people have success. Or to be in the spot that I used to be in.”
So Chan has had to separate the raw emotions of the moment, from the logical thought of tackling the fight at hand. He can’t worry about those other guys. He got his plan of attack for the world championships.
He’s miles ahead of where he was at his first world championship back – at Boston a year ago. He has more confidence and a tougher list of elements. “Last year, I think there was always a lingering doubt that I was behind the eight ball, compared to the other guys,” he said. Coach Marina Zoueva said last year her most important task was to instill confidence in him.
It’s all been worth it, he says. He’s surprised himself at what he has been able to do. Where this will all take him, we shall see next week. Next year? Perhaps two quads in the short program. He can always dream (or plan), can’t he?