In the midst of the frothy Hats and Horseshoe party, the shiny shoes of the storied horse owners and breeders, and the proven stakes winners that move on unseen springs around the walking ring of the Queen’s Plate, there is a horse called Vaughan.
Vaughan is a late-comer to the 158th running of the Queen’s Plate, Canada’s premier race, the one everybody in the game in this country dreams of winning. He’ll be the longest longshot of the field, overlooked by many. The morning line says 50 to 1. That’s just a guideline. It could be more. After all, the colt has won only $8,436 in his life. (The two richest horses in the race are State of Honor at $423,736 and King And His Court at $426,412). Vaughan has run in only two races, winning none. He almost forgot to leave the gate in the first race of his life only a month ago.

The Vaughan family. Vaughan will wear a red hood like this when he runs in the Queen’s Plate
Vaughan will be only the second Queen’s Plate starter for trainer John Mattine, the first being Okiyama six years ago in 2011. Okiyama was a longshot, too.  At odds of 63 to 1, he finished last of 17 after forcing the early pace. That Plate was won by a filly, Inglorious. This year, a filly, Holy Helena, is favoured to win the Gallop for the Guineas. Mattine is hoping that history won’t repeat itself this time. 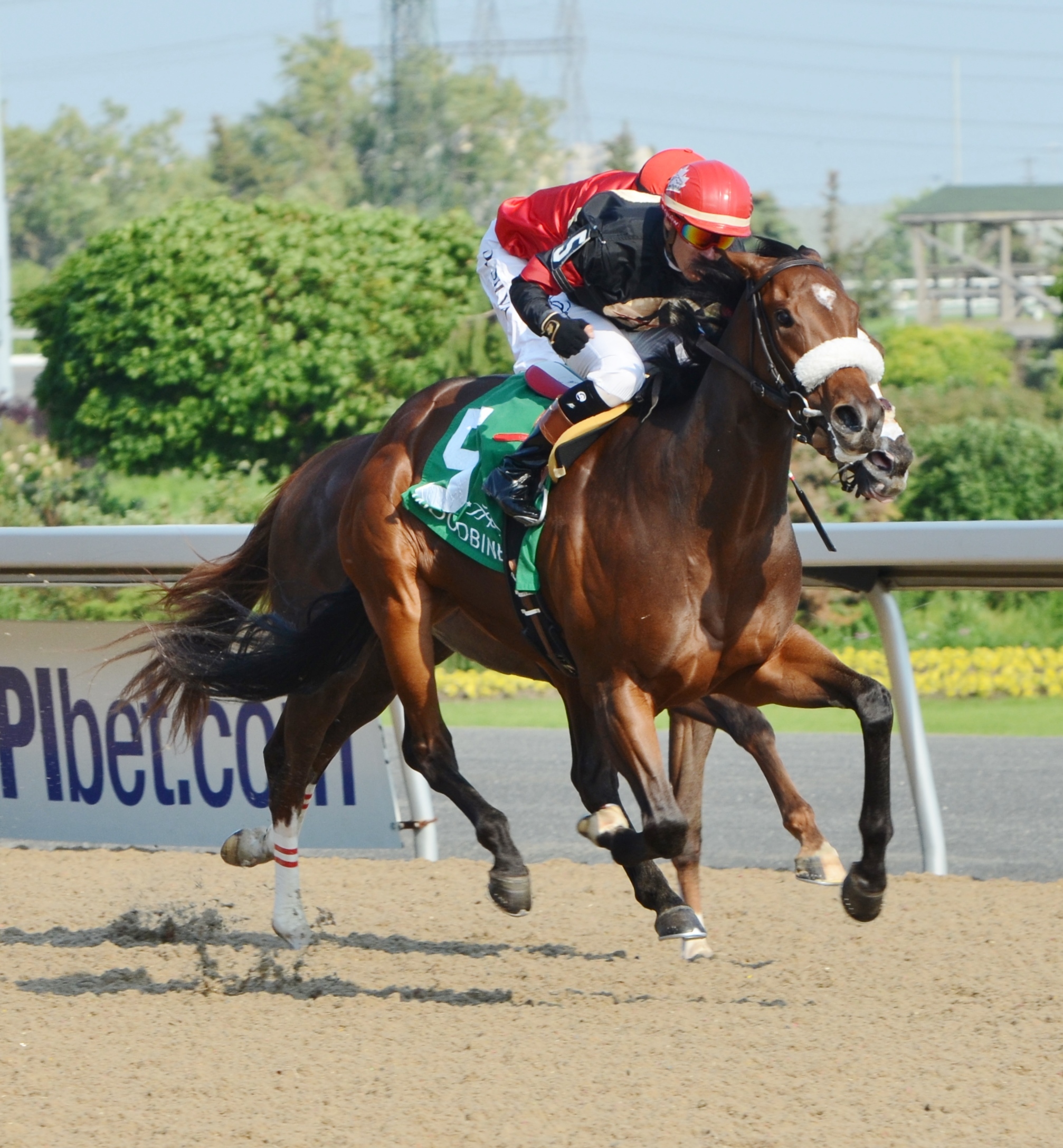 Holy Helena, winning the Woodbine Oaks.
Vaughan, the horse, is owned by John Romanelli, whose RCC company is best known as a restorer of waterlogged basement foundations.  Romanelli owned a couple of ears of Okiyama, one of his early plunges into a nine-year history of horse ownership. He’s also owned the likes of Buongiorno Johnny, that made everybody feel like they were in Italy when they spoke his name. It’s no secret that Romanelli has Italian roots, like much of Vaughan, the city. 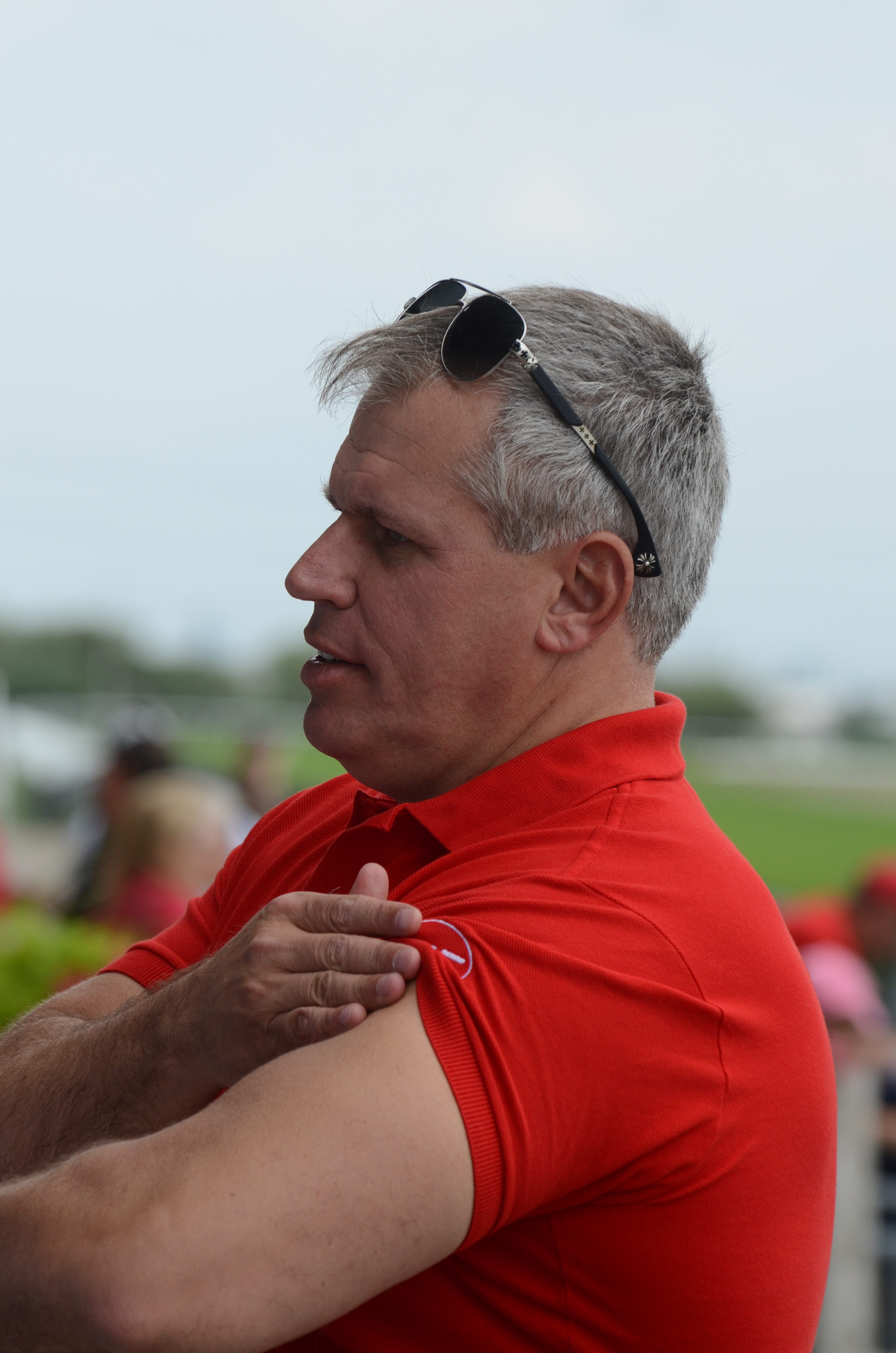 Romanelli, lover of Vaughan, the horse and the city
Last November, Romanelli bought a colt called Conquest Zipped Up, from the dispersal sale of Ernie Semersky’s Conquest Stable for $17,000 US. Because of the dispersal, there are now multiple Conquest horses with new home all over the continent, almost to the point that you can’t remember which Conquest horse is which. Romanelli wanted to put his own stamp on this colt and renamed him Vaughan, after his home city. He loves Vaughan, north of Toronto. Like the horse that bears its name, Vaughan is a town lurking under the radar in Canada’s largest metropolis. Even though it is a city, it doesn’t even have its own listing in the phone book, nor does it have its own hospital.
Still, it was Canada’s fastest-growing municipality from 1996 to 2006, when the population exploded by 80.2 per cent. It’s the home of Canada’s Wonderland, the McMichael Art Collection, and the megamall, Vaughan Mills.
The task of Vaughan (the horse) seems improbable and impossible. The cast of characters surrounding him also includes 46-year-old jockey Slade Callaghan, who hasn’t ridden in a Queen’s Plate in seven years, since he piloted Seawatch to finish sixth, his best finish ever in five previous attempts at the Plate. There’s a reason for Callaghan’s long absence from Plate consideration. Three or four years ago, he semi-retired from riding, deciding to ride only the horses trained by his wife, Kelly. At 5-foot-8, he’s tall for a jockey. And he loves dabbling in real estate. 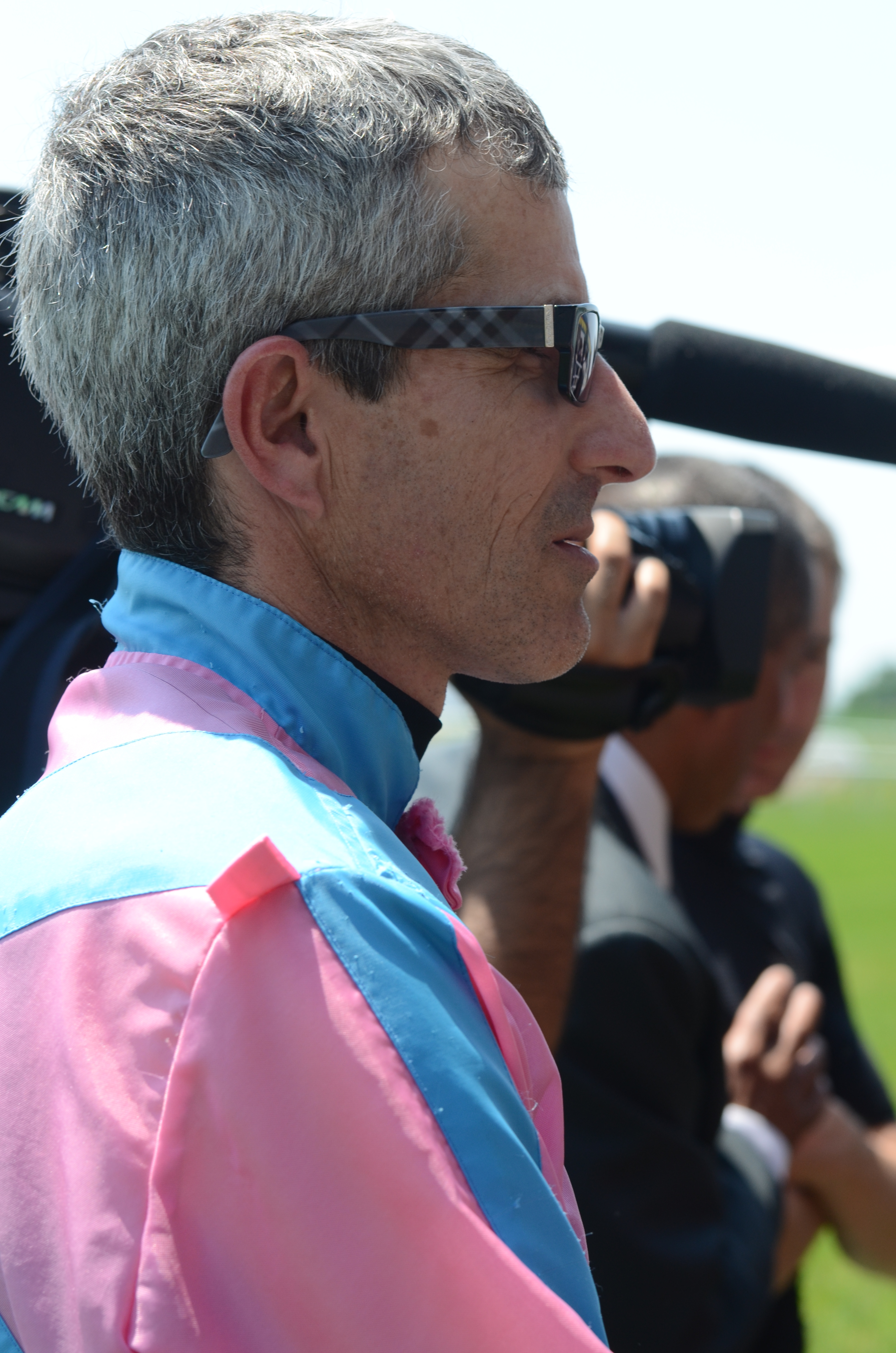 Slade Callaghan
However, more than a year ago, the Barbados-born Callaghan began to feel the tug of riding good horses again. Earlier in his career, he’d scaled the heights with Rahy’s Attorney, which he rode to win the $1-million Woodbine Mile, defeating top North American milers.

And although Callaghan had never won a Queen’s Plate, he had won a Canadian Triple Crown race on Portcullis and two legs of the filly’s version, taking the 2003 Bison City Stakes with Seeking the Ring (in a dead heat for the win) and the 2000 Wonder Where Stakes with Misty Mission, who made only three starts in her life. All three were Sam-Son Farm horses. Callaghan often got the mounts when somebody else couldn’t honour a commitment. And he made the most of those chances.
However, two weeks into the Woodbine meet last year (and his comeback), he had a morning training accident, and broke his right leg and his right ankle. Surgeons inserted a rod into his leg, starting from beneath his knee cap right into his bone. His ankle, more problematic, got some screws. All of that hardware is still there. That put him out of action for much of last season.
But he understands patience, and the time you need to put yourself back on track. He found a way. For weeks he lay in bed, watching television series. But he wasn’t idle. He couldn’t put any weight on his leg, but he could lie in bed and stretch and do certain things to keep the injury mobile.
He never went to rehab. “I did everything myself,” he said. “With my experience dealing with horses. I used a couple of machines that we use on horses, like lasers and ice packs. “ He would get periodic medical check-ups to ensure the bones were in place and mending properly.
At the end of 12 weeks, he could put away the crutches, although at first, he limped for a while – not so much because of the fractures. His hardest work was to deal with inflammation and scar tissue, and the tightening of his tendons, and shrinking muscles.
He never considered giving up. Not once. “It never crossed my mind,” he said. He rode a race in September, and by the end of the year, had only a handful of rides.
He’s had injuries before. Back in Barbados, Callaghan suffered a serious shoulder injury that prompted him to have nerve transplant surgery in Toronto, but when he caught sight of Woodbine for the first time, he knew he had to ride here. He moved to Canada in 1994. 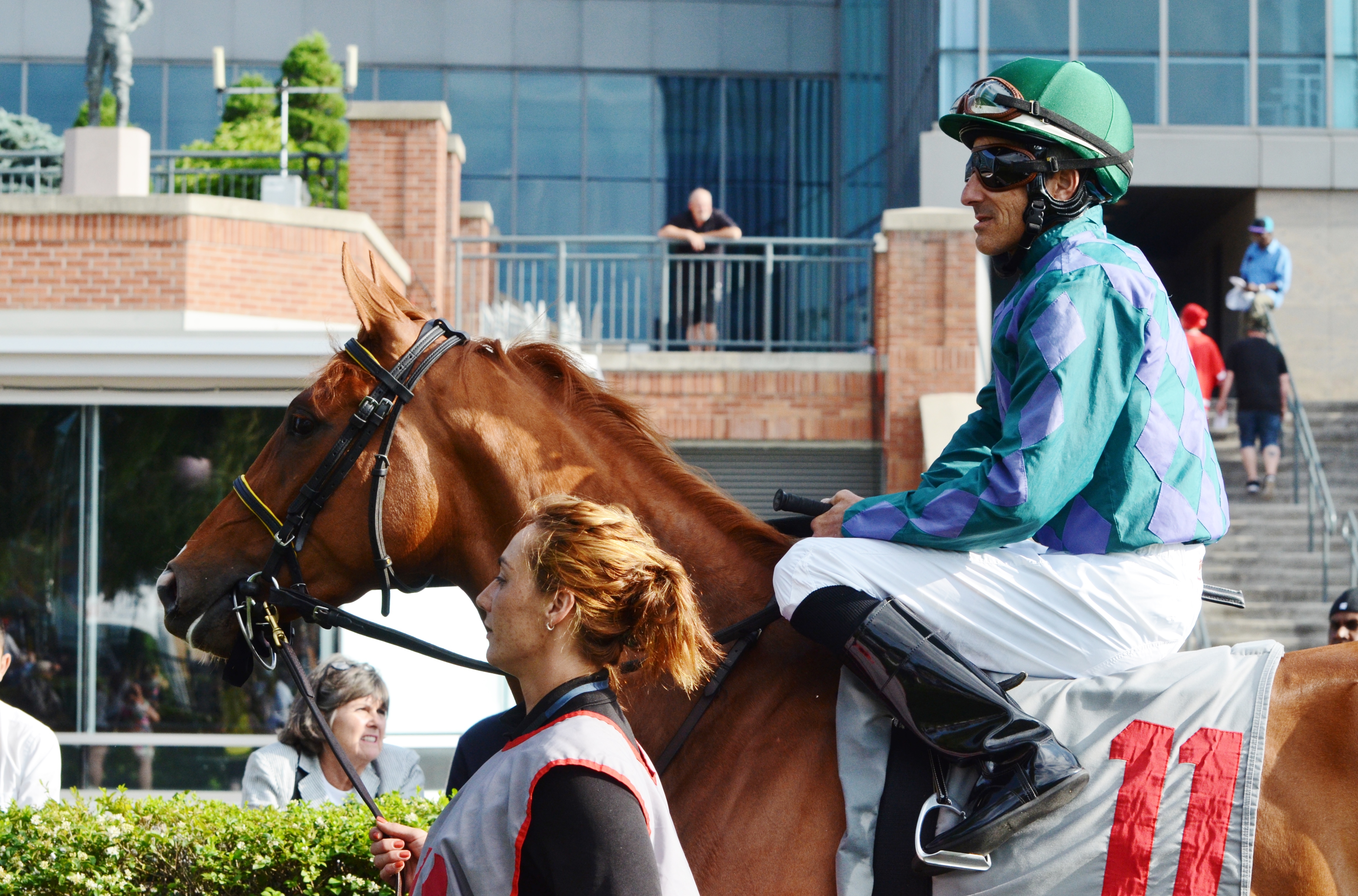 Callaghan warming up for his Plate ride during a Saturday race at Woodbine
He knew that this season, he would have to start from scratch again, drumming up business from nothing. He made regular daily stops to Mattine’s barn. With the Queen’s Plate coming up, Mattine took a second look at Callaghan, who had experience.
“Slade can ride a horse,” Mattine said. “He kept saying: ‘Give me a chance on him.’ I said: ‘You know what? Let’s give him a chance on him.’
“I know he’s been on nice horses. He was pretty cool and calm and collected at the [Plate draw.] I’ve always liked him.”

CAllaghan “can ride a horse.”

The way Romanelli sees it, Callaghan isn’t the sort to lose his head and get into a speed duel in a major event. “He’s not going to get overly excited,” he said. “He’s going to ride a smart race and if things open up, you never know.” So much can happen in a 1 ¼-mile race, he said.
Callaghan discovered that he was to ride Vaughan only the day before the Plate draw for post positions. It’s given him a lift, like nothing else. “It means so much that someone has confidence in you to put you on a horse in the biggest race in Canada, after not riding full-time for a while,” he said. “It’s not like you forget how to ride.”
The thing about Vaughan is that it’s not as if he doesn’t belong in Plate chatter. His mother is a mare called Destroy, who was Canada’s broodmare of the year in 2011, after having produced brilliant horses such as multiple graded stakes winner Smokey Fire, as well as Utterly Cool and Ghost Fleet.
And Destroy’s mother was another diva of the racetrack: Eternal Search, Canada’s champion sprinter in 1981 and champion older mare in 1982 and 1983. The awards don’t tell the whole tale of the horse. Eternal Search as a racehorse was as tough and speedy as they come. A star, back in the day.
Mattine says he’s liked Vaughan from day one, and has no regrets in buying him for Romanelli. “He’s a horse that’s improving and we’ll see if he fits in with this calibre,” he said. 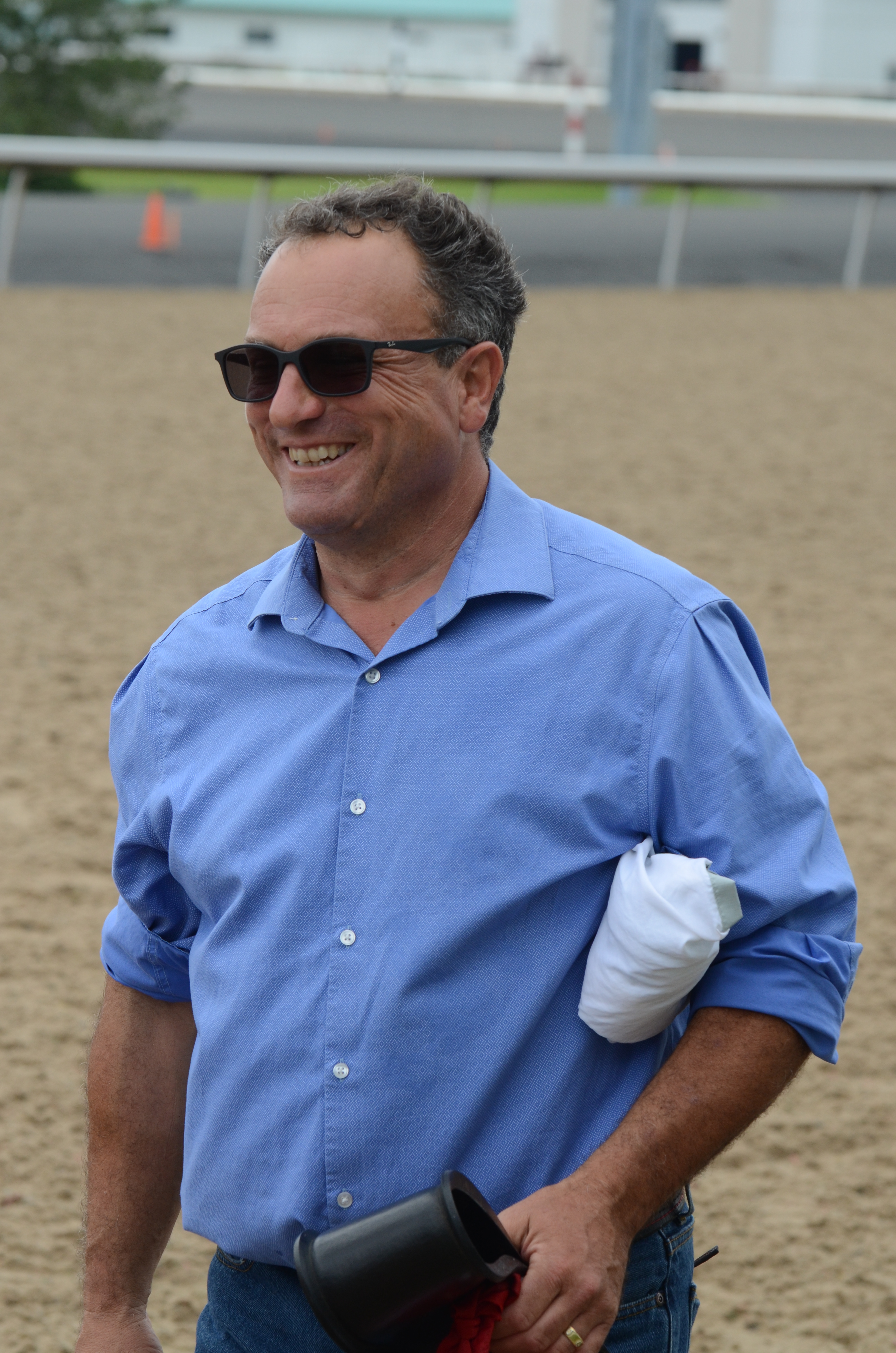 John Mattine
Winning a Queen’s Plate, of course, would mean a great deal to Mattine, whose father, Tony was a Woodbine trainer. And his grandfather minded the “gap” where horses get on and off the track. Because of his grandfather, Mattine witnessed part of track lore in Queen’s Plate history. He watched Amber Herod go through the gap enroute to a start in the 1974 Plate, but he took an unscheduled roll in the mud (It rained buckets that day) and arrived in the paddock with his new white blanket besmirched. Then he went out and won the Plate by 1 ½ lengths, with his ears pricked.
As for Romanelli, who admits he hasn’t been sleeping all that well the past few nights, he didn’t  want to find out two or three months after the Plate was over, that he had a horse that could have been a contender. “What if he broke his maiden by 10 lengths and I go: “Why didn’t I try?”
Mattine says they are making this a serious pilgrimage to the Plate. It’s not a vanity contest. “We’re serious, don’t get me wrong,” he said. “If you want to have fun, you go to Vegas.”
And then, it seemed an omen, when Mattine and Romanelli won an allowance race at Woodbine two days before the Plate with Broken Meadow, winning the first race of her life, rather impressively. Owned by Romanelli, she was a 24 to 1 longshot. Mattine has always liked this mare, too. 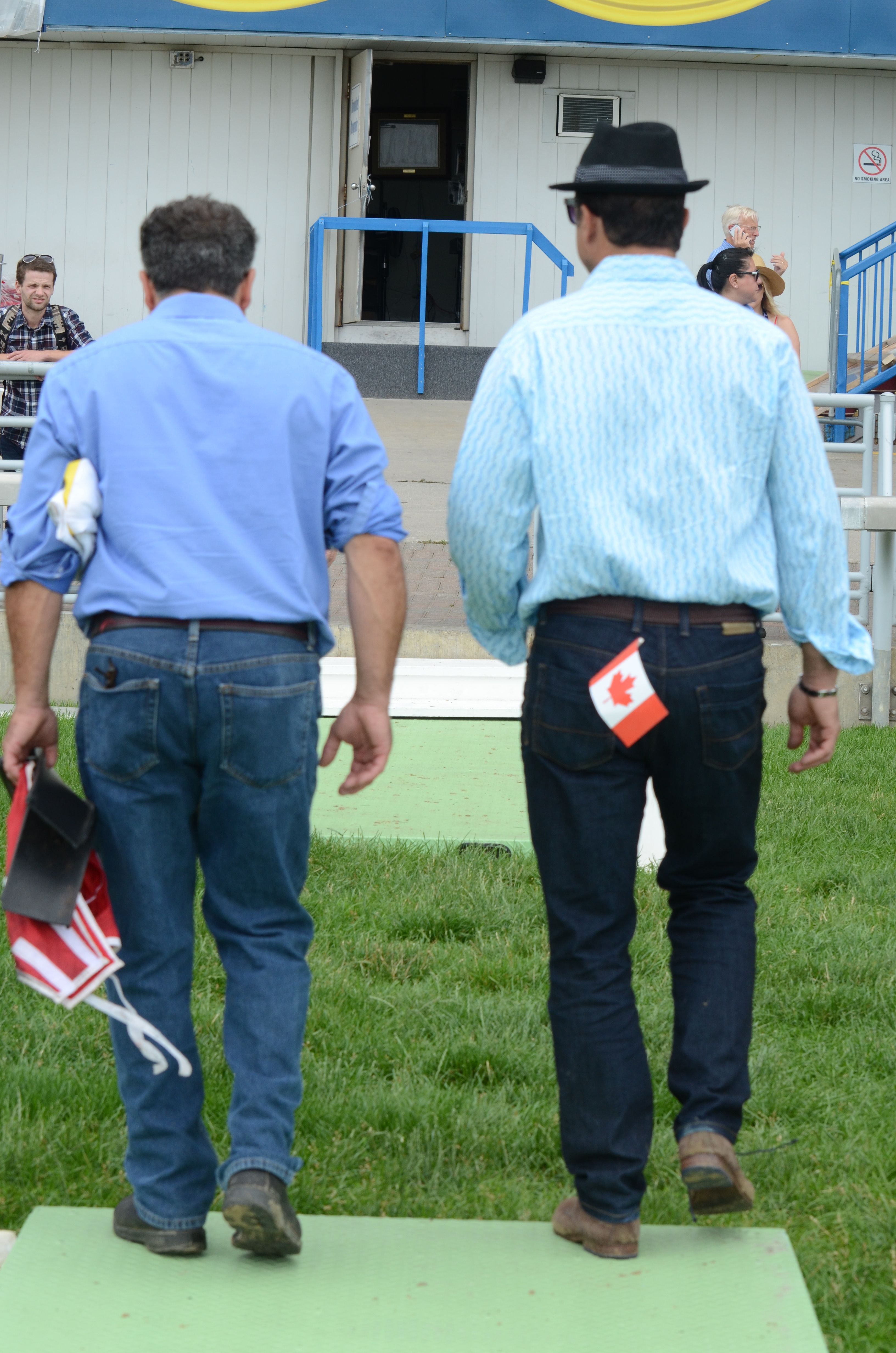 The omens are good. Note the Canadian flag in the back pocket.
Of course, longshots have won the Plate many times. T.J.’s Lucky Moon won in 2002 as an 82 to 1 shot., second longest shot behind Maternal Pride in 1924, at 95 to 1. T.J.’s Lucky Moon had won one of only five previous starts and he was a mean sonofabuck, too. His win was wacky and unforgettable.
And maidens?  Scatter The Gold was the most notable one in 2000. He hadn’t won before the Plate, but he had been bred in the purple by Sam-Son Farm, a leading racing juggernaut in the country. If Vaughan should win, he could become part of Queen’s Plate lore, too. One thing Romanelli and Mattine know for sure: there will be a lot of cheering from Vaughan (the city) for Vaughan (the horse) on Queen’s Plate day.