If Jason Brown ever found himself in the Hundred Acre Wood, he would be Tigger, hopping and bopping, swinging his arms around everybody with glee, smiling until tomorrow.
“Tiggers are wonderful things,” the song goes. “Their tops are made out of rubber. Their bottoms are made out of springs.”
The young American is irrepressibly positive, despite living in the shadow of the Giant Quad, of which he’s landed few. Three years ago, a video of him skating to “Riverdance” at the 2014 U.S. championships went viral, attracting something like four million viewers.  It wasn’t the jump content that captured hearts. It was the Jason Brown mystique: beautiful skating, with expression, with skating skills. The kind that lives in the memory. 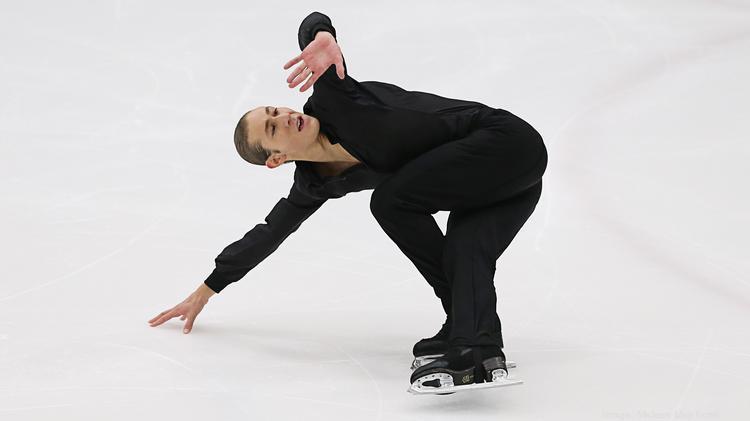 See? We still remember his “Riverdance.”

Brown has always been playing catch-up with the difficult jumps. He was injury-free until the past two seasons, when he set out to make up the jump deficit. Still, he won’t blame his back injury from a year ago that caused him to miss the U.S. championships and thusly, the worlds, too, and a stress fracture in his right fibula, his landing foot last December.
This time, he didn’t dare miss U.S. nationals, since a petition to go to worlds last year didn’t pass muster. So he competed in January. And February. With watered-down content and certainly no quads in sight, he skated. And remarkably at nationals finished third to youngsters Nathan Chen and Vincent Zhou, and by the grace of god – Zhou went to junior worlds and won it instead with wicked quad content – made it to the world championships in Helsinki next week.
Brown won’t blame his injuries on the quad pursuit. Although it may be part of it, he thinks it’s just because male skaters at a certain age are going through a growth spurt, and that males are just figuring out their bodies and what the limits are.
“When you’re young,” said the 22-year-old youngster, “…and being young in the sport, you’re kind of a whippersnapper, able to do these things without even thinking about it. Your body is just quick and it fires fast and you’re short and as you grow up and mature, things start to change.”
Somehow the description of “whippersnapper” fits him. The word seems all Tiggerish. But he’s past it now, he says. His injuries have taught him how much he can push the limit and when he should pull back.
Before his stress fracture flared up, he said he had been landing quad Salchows and quad toes. And he’s going to press on in the future. Going to go for more quads in the future? he is asked.
“One hundred per cent!” Brown cries in that bouncy way of his. “One hundred per cent!”
He’d like to also work on a quad flip. He’s constantly working on quads, he says, although he said his task is to find the balance between pushing his technical limits, staying injury free and doing only what he can manage. No sense putting four quads in a program, if it only falls apart under the stress of competition.
But here’s the rub. He’s been injured. He was wearing a special boot for support on his right foot and took it off only a week and a half before he left for Four Continents, where he finished sixth without a quad. His leg still felt weak. He was still taping it up to compete. But he has his strength back now. The height of his jumps is better, he is hustling across the ice at greater speed.
The quad toe loop is going well, he says. Elements will return. He’s had five weeks since Four Continents (finished sixth without a quad) to get his quad toe loop back in formation. He intends to put a quad in the short and a quad in the long. Mind you, he’ll have to see how they go in practice.
“It’s all about putting together a program that you feel the most confident about and to put those clean skates out there,” he said. “The main goal is to do what I can do and do it in the most competent manner.”
So no, he’s no Nathan Chen on the quad question. But if Tigger bounces recklessly to and fro with exuberance, on the ice, Brown is exquisite. He skates on big curves, the way skating was born. He uses his feet. He has transitions. He does crazy things, like a hydroblading move low to the ice, which then explodes into a lofty split jump. He gets top component marks, as well he should. Brown may be five years older than Chen, but he’s a whippersnapper in other ways. Both of his routines this season are things of beauty.


“The technical side can only draw people in so far,” he said. “Riverdance” was special and what it represents is what he hopes he can bring to the sport.
He’ll work hard to improve his technical content because he has to. But he won’t ever lose the other side, “never losing what made me fall in love with the sport in the first place,” he said. “I love it because I can perform, because I can draw people in, because I can connect with an audience.”
He faces the same conundrum that Patrick Chan – he of the beautiful edges and scary speed – does.  “I don’t care what anybody says, but what I know for sure from my experience so far since my comeback, when it comes to adding more quads…the skating transitions, the skating skills do get sacrificed, 100 per cent,” Chan said. “I guarantee. Now does that make me shy away from pushing myself technically? No, not at all. I think I have to go in the direction that the sport is going in, which is dictated by the top men’s skaters. All I can do is follow the lead.
“All I know is all I can control is maybe being able to combine the difficulty of the quads with really great transitions and skating skills. And that may be my edge above the other men. That’s not for me to decide. All I can do is skate the way I’ve always skated and then add additional quads as I go along, to my capabilities.”
So Chan and young Tigger are treading the same path. And if Brown were ever to get lost in the Hundred Acre Wood, I think I would open the door of my shack to let this cat curl up around the hearth. Because skaters like Chan and Brown must be cherished somehow.