So why of all people could a person like Denis Ten be felled by such ugliness in a country that he championed so hard to raise up? With his big heart, he wanted to help. How could such a singular life be worth so little?

The tributes are pouring in world wide since Ten was stabbed and killed by two people who wanted to steal the mirrors off his car.)  I’ll show one created by his friend Dimash. Afterwards, an excerpt on Denis Ten from my book “Skating to Sochi,” printed in 2014.  There are no more words than this.

By winning a surprise silver medal at the 2013 world figure skating championships in London, Ont., Denis Ten became a poster boy for many things: illustrating how well the (relatively) new judging system works when it enables an outsider to bounce to the top of the standings; how it’s possible for a skater from a country with no history of the sport to turn into an Olympic contender; how no one should give up, no matter how bad things seem in the arena of winning and losing.

Ten, the first skater from Kazakhstan to do anything in figure skating, including most recently, win a world medal, hadn’t exactly set the world on fire during his 2012-13 season, finishing near the bottom of the heap with sixth and ninth-place finishes at his two Grand Prix events. And he finished only 17th in the long program at the Four Continents championships in Osaka, Japan, after falling twice and doubling three jumps.

He had never won a senior Grand Prix event and all last season, he’d been plagued with injuries and boot problems, hurting his right ankle in December, then the left. Ten admitted that two days after he returned from Osaka, his mood was low.

“I was really, really disgusted,” he said. He was still not filly recovered from the injuries when he won that world championship silver medal three weeks later.

Ten, a true artist, according to Lori Nichol, who created his routine to “the Artist” said the Kazakhstani is incredibly sensitive to everything. Call it the Prince and the Pea syndrome. He’s aware of the slightest tweak of his blade or the fit of his boot.

“For athletes like that, it is extraordinarily difficult to have a decent pair of boots they feel good in,” she said. “Add the boot problems to the injuries and he has never really had truly consistent training.”

“I had so many rough skates, really hard times,” Ten said.

“I wanted to show everyone that I was still playing,” he said.  From that moment on, Ten had only one thought in his mind: doing well at the world championships. In bed, he thought of nothing else.

Carroll didn’t know it, but Ten worked out (doing unspecified tasks) in his garage until 10 p.m. each night. “I was on some mission,” he said.

The new attitude worked. It was as if Ten could do no wrong at the 2013 world championships. Buoyed by what he sensed was a sympathetic audience, Ten landed a quadruple toe loop and a perfect triple Axel in the short program, inspiring a standing ovation. That put him in second place, incredibly, ahead of a couple of world champions and a European champion. His 91.56 points was the fourth highest score all season for a short program. It was his best skate in four years, he said.

“I was ready for it,” he said. “When I stepped on the ice, I was really confident I would have enough strength. But it still feels like a dream that I am still sleeping in and it’s time to wake up soon.” For the free skate, under a new pressure he’d never felt before, Ten decided not to think about medals, but rather to imagine that he’d already blown it. That took off the pressure, allowed him to skate with freedom. His performance was one for the ages. Despite not having been able to sleep the two nights before the final, he won the free skate over three-time world champion Patrick Chan. Ten fell to his knees and kissed the ice.

“I never though I would finish the season this way,” he said. “My free program hasn’t gone well all season….I was waiting for this moment so long.”

Ten didn’t have world championship medals in his mind when he began to skate at an open-air rink in Almaty, Kazakhstan as a youngster. (These rinks were actually soccer fields that were transformed into ice rinks in the winter.)

And yes, he really is from Kazakhstan. He’s not some Russian with the right passport. Instead, he’s a member of the Korean minority in Kazakhstan, and the great, great grandson of Min Keung-ho, a Korean general who fought for independence in his country.

“Sometimes I think he watches me and I have no chance to fail him or disappoint him,” Ten said. He feels an additional responsibility to his ancestor to carry the torch.

After Ten had skated for two years in the outdoor elements, Almaty got a very cold covered rink – but the temperatures dropped to minus 17 degrees Celsius inside during the winter.

“I still remember how my mother would put three pairs of pants on me,” he said. “I was like a cabbage.”

“It helped me to be quicker,” he said jokingly.

Then he moved to shopping malls, which had ice surfaces that weren’t exactly Olympic-size. Every Friday, the malls would stage an ice exhibition and Ten would perform for “all of the shopaholics,” he said. He didn’t feel frustrated by the meagre conditions. He didn’t know anything else existed.

When he was 10, he moved to Russia to train and learned the ropes under Elene (Vodorezova) Buianova, the first Soviet female skater to win a world championships medal (bronze in 1983). And now a master coach in Russia.

“In real life, he is actually rather quiet,” Buianova said. “Very quiet. Very shy. But he transforms on the ice and becomes so emotional. He jumps easily, like a cat. He has phenomenal jumping ability.”

Ten spent seven years there with his mother, Oksana, a violinist. (His first language is Russian.)

“I became a normal skater there,” he said. His father, back home, was an engineer with his own business. His brother, Alexei, also stayed home. When Ten competed at the Vancouver Olympics, he was the youngest male figure skating at the Games, aged 16. He finished 11th. 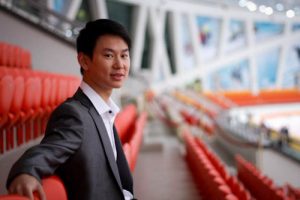 When he moved to California in 2010, with his mother (chief cook and manager) in tow, Ten was taken back to basics by new coach Frank Carroll. And Lori Nichol began to choreograph his routines.

“He’s a good spirit,” Nichol said. “He’s very intelligent. He is very compassionate and caring, and when you’re working on the ice and I give 150 percent, he’s giving 150 per cent back.

While having his routines to “The Artist” movie soundtrack choreographed, Ten spent a month in Toronto, soaking up all the nuances he could from Nichol. Others usually spend far less time when getting choreography done.

In trying to find the proper performance vehicle for Ten last season, Nichol had written down only one piece of music for Ten – “The Artist” – when usually she offers six or seven options. When Ten arrived in Toronto – before she had a chance to show him her choice – he blurted that he had seen “The Artist” on the airplane on the way to Canada.

“It was so incredible. Do you know it?” he asked her. She opened her notebook and showed him her choice.

From track to track, the music was so varied and so usable for skating, that off-handedly, Nichol suggested that they use it all, and do the first part for the short program and the second for the long. Carroll agreed to the unusual plan.

Over the past few years, Ten has gained an immense trust of Carrol. “Whatever I have to do, just tell me and I’ll do it,” he tells the veteran coach.

“I had a long way from being a kid, skating like a cabbage,” he said. “And now I skate in a good costume at worlds. So many things to take in. I’m glad I have this medal and I’m proud of my parents for being so patient.”

From time to time, Ten gives seminars to budding young skaters back in Kazakhstan and still considers that he lives there. He says Kazakhstan now has many gorgeous rinks and there are many young skaters who want to follow his path.

And Kazakhstan is quickly becoming a modern country with the wealth of oil. In 1998, its leaders decided to move the capital of the country from Almaty to the steppes where donkeys used to tread and build a new city, Astana, from scratch. It’s now the second largest city in Kazakhstan.

“Soon I believe we will have new stars,” Ten said. “I feel that I am a tank, making the road for small stars.”