Daisuke Takahashi will be the spice that warms your cocoa this season. The mulled wine. The Kobe beef. The autumn leaves kicked up into a new eddy in the sun. The jack of hearts.

At 32, he has done the unexpected after a four-year absence, hobbled by a knee injury and an onslaught of competition from his own country. He’s coming back, he announced on July 1. He finds it difficult to put into words just why, even in Japanese, but who is arguing? We know there is a treat coming whenever he skates. We will all press our noses against the glass to see it.

The right knee of him has been a bother for a long time. He tore the ACL in that knee on Oct. 31, 2008 and had to withdraw from two Grand Prix. He had surgery to repair a ligament and missed the entire season. Doctors inserted a bolt in the knee, and he didn’t even return to the ice until April. On May 19, 2011, he had the bolt removed. And felt lighter. But the knee came back to haunt him – he aggravated it while jumping just before the 2013 Japanese nationals  – and this caused him to miss the 2014 world championships after the Olympics. In October, 2014, he retired. He’d had enough. “I felt like I was done and that was it,” he said.

While in Toronto for choreography last week, Takahashi said that the Sochi season was a very difficult one for him mentally. And there was that injury that had an impact on him for the entire season. So it seemed easiest and most sensible to just finally walk away – at the time. Yuzuru Hanyu had won that Olympics, Takahashi’s last event at which he had finished sixth.

But four years later, it hasn’t rested with Takahashi so easily. He spent the past four years doing various things: working for Japanese television and moving to New York to study dance (recreationally) and learn English. But in his bones, he felt he had some unfinished business, that he hadn’t gone to the end of what he could have done when he left. He hadn’t found his bottom.

Watching all of those skaters compete at events that he covered as a television commentator was a boon. First-hand he was witnessing an encyclopedia of different lives. He could see that it was possible for skaters to have different goals, that there were different ways to compete, and that not everybody has to compete for the same reasons. He began to think that he, too, might enjoy finding a different way to compete, not like the mode of the past, where to win is divine.

He also realized he didn’t have a central focus in his life. All of his life, skating had been that solid, central axis. There was something else he needed from the sport. He still can’t quite put his finger on it or explain it completely. He just knows that this comeback is for himself.

Yes, it’s important to meet the expectations of others, he says, and he will have some. He realizes that his return to competition might inconvenience his Japanese peers, that he might take a spot from them. But still, he must do this. He must return and push himself to the end of his strength and will. He needs competition.

And not necessarily to win competitions. In the past, his motivations were to win. He wanted to win against himself, and he had to win for other people.  This always brought anxiety. And he was always conscious of the younger skaters in Japan – and elsewhere – rising up, pushing him. He felt the push. Truth be told, his mind wasn’t all-in. He was distracted by all of the external stuff.

Now he’s in an eddy of his own making. An eddy isn’t just about a whirlwind that carries you somewhere. It’s a turning aside, or a big departure from the main current or thought of life. Earlier this year, the thought came: to stop his current line of work and focus on his own skating. Mainly, it happened after he watched last year’s Japanese nationals. “That was the trigger,” Takahashi siad. “That’s what made me want to come back.” 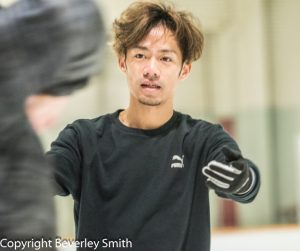 But it wasn’t until April that he started to take action, because he still had duties to commentate for Japanese television at the Pyeongchang Olympics and at the following world championships in Milan, Italy. He couldn’t train before that.

Skating? Had he left it altogether? The season after Sochi, he had been booked for some ice shows, one being Art On Ice, but there were others. At the time, Takahashi admitted he wasn’t really enjoying skating. He was doing it because he had to. Then when he went to New York, he didn’t put his skates on at all for eight months.

And for three years, while he was working for television, he skated only sporadically. But then the trigger kicked in. “There came a point where I thought: ‘This can’t go on,’” Takahashi said. “I thought I might have five years at most of being able to skate, as in being able to put out a decent performance.” The cut-off age, he figured was 40. If he wants to do it, it has to be now.

Still, he’s committed to this quest for this one season. After that, he’ll see.

He knows it will be hard to make this comeback. It’ll be like rolling a huge rock up a hill. He hasn’t trained seriously for four years. His motivation is high. His body can’t quite match the mind. “My body won’t let me,” he said, speaking of stamina and strength. He’s returned to strength training. “I’m really having to rebuild my body from scratch,” he said. And the clock is ticking.

It hits him that he can’t readily do the things he used to be able to do.

At the moment, he has all of his jumps back, up to the triple Axel. He just started practicing quads. He’s not at the point where it’s feels like it’s feasible yet. He’s working on a quad Salchow. “I’ve never actually landed one successfully,” he said. But he’s been trying different entries into the jump and it’s starting to hum a bit. “We’ll see how it goes,” he said.

He’d like to do the quad toe loop, but about three years ago, during a show, he sprained his left ankle on the toe pick of the jump. “Ever since then, for three years, I’ve been scared to do it,” he said. “And now my body is weaker all over.”

When he started training again, he tried to do the quad toe loop, and it felt like he might get a sprain, so he’s still a bit wary. He’ll think about it. “We’ll see how it goes,” he said.

He knows all about the difficulties that Patrick Chan had, trying to make a comeback after time away from the competition wars. “It must have been hard,” Takahashi said. “Everybody around him assumed he would win. They had high expectations. And he had to come back in that setting. He was the leader for figure skating in Canada. He was their top skater and he had his place in the world ranking. Having to come back under those circumstances, with a lot of pressure, there were things that didn’t go so well. I can imagine how tough it must have been.”

But Takahashi’s story is different. If he thinks about it objectively, there is no way that he can win in his current form at the world level. “Obviously as I progress along, things might change,” he said. “I might start feeling like maybe I have a chance, but I won’t know until I try.” 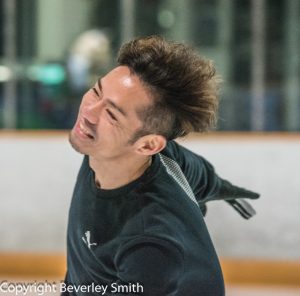 Yes, he’s seen all those competitions over the past four years and knows he’s in a completely different sphere and at a totally different level. “I am not making my comeback at that level,” he said.

If there is a question about what he wants to show with his skating, well, it’s more about him being 32 years old and “figuring out if it is possible to grow” at this age,” he said. “I have my doubts, actually. But if I manage to make even a little bit of progress, if people can see that and I can feel it too, then that may encourage people who are about to give up. And that may be good enough.

“It may not be a big improvement, but even a small one would give me confidence, and it would be a good learning experience for me.”

He’ll have to start from the bottom. Of course, he has no Grand Prix this year. He’ll have to compete at qualifying competitions just to get to Japanese nationals. “I haven’t been in one of these for ages,’ he said. “I have no idea how it will be.”

His main focus will be on Japanese nationals. The sectional and regional competitions will serve as practice competitions for the big one. That means he might have three competitions this season, so he will treat those two qualifying competitions before nationals as important ones.

But he’s Daisuke Takahashi, he of the lyrical line and expression. And that’s what we want to see.

Please note that this article, as are all of the articles on this site, is subject to copyright laws.