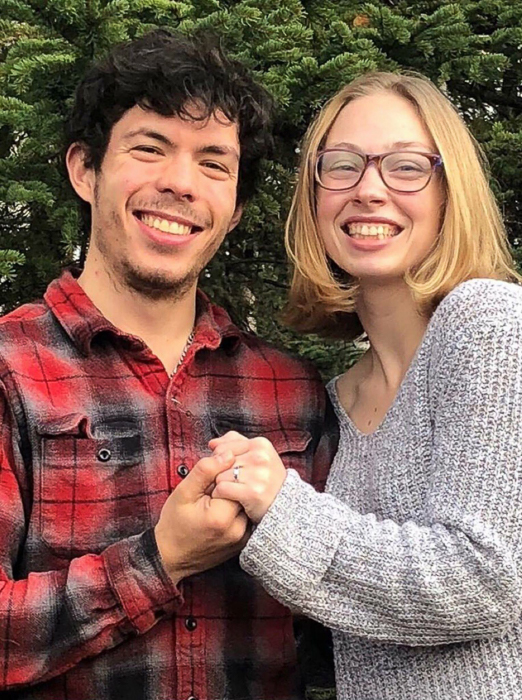 Keegan Messing, man of adventure, keeper of the north, tried to be so prepared to make this day special.

He was in love. And he wanted to propose to his girlfriend of 2 ½ years, Lane Hodson. It was supposed to be a surprise early this week.

The venue was to be exotically northern, up beyond the snow line at a ridge high up in the mountains near Anchorage.

Hodson had been working all day and when she came home at about 5 p.m., she really didn’t see the wisdom of backpacking up a mountain for an hour into the wilderness.

Messing had to talk her into it.

He had spent a lot of time preparing a picnic. “If you ask her, it was a stupid picnic that she didn’t want to go on,” Messing said.

“Oh but I really want to go,” Messing pressed. In the end, he won out.

And up the mountain they went, Messing toting the biggest backpack of his life. He had spent the whole day shoving stuff into it: some tent poles from his dad, to make a rain fly, just in case it rained.

He also brought a nice thick blanket, and his down sleeping bag, big enough for the two of them. He made her favourite soup – kale with sausage – he had asked her for the recipe and made it the night before – he brought milk to make some hot chocolate, a treat that Lane had purchased at the world championships in Milan last March. He packed water bottles. He had a pot, a kettle, a couple of tuques, some gloves because “well, it’s winter,” he said.

Never had he hauled so much liquid on his back up a mountain. Never had there been a heavier impost.

Hobson had been from a town three hours north of Messing’s home town. They’ve known each other for a very long time. Messing was 12 years old when Hodson started to skate. “She was just a little kid at the rink at the time,” he recalled.

When she started going to college, she moved to Anchorage and began to skate in Messing’s rink.

They saw each other every day.

She had been skating there for almost a year before they started to date. This happened after a gaggle of kids began to poke fun at Messing: “Oh you like LANE!” they teased.

“They were just trying to be cute little kids,” Messing said.

And then he realized that he did.

“Well maybe we could do this stuff together,” he thought.

So they made excuses to do something. They began to hang out more and more. Then…the date.

Then she broke up with him. He was heartbroken. It was two weeks into the relationship. Who said the course of true love was easy and trouble free?
“But we both really liked each other and saw things through,” Messing said.

They had lots in common. They did hiking trips. Camping trips, too. “Everything I do, she’s the one I want to do it with,” Messing said.

And all of this led to the evening on the mount. In Alaska.

Messing just wanted to make the trip up the mountain comfortable and nice.

It was anything but.

Everything that could go wrong, went wrong. Murphy’s Law settled onto the pair like a dark cloud.

The wind began to blow at 30 to 40 miles per hour. “Just trying to walk in a straight line was impossible,” Messing said.

Eventually, they reached a spot where some folk had built some stones into a fort. Settle into that, and you are protected from the wind, somewhat. In they went. But the wind still howled.

“At this point I’m thinking: ‘This might not work,’” Messing thought. “This isn’t going to happen.”

But he erected the poles and the rain fly and used it as a wind break.

Then, okay, it seemed possible after all.

The quilt came out. They sat on it. They pulled the sleeping bag over them. It was oh so cozy.

Then, Messing decided to heat some of the soup. He set up the stove, and hitched the gas tank to it.

He sat and stared at what he had just done and slowly realized, that although he had been so careful to bring everything but the kitchen sink, that he had actually forgotten the mode of fire to light up the cooking instrument.

“I had thought of everything, but…” Messing said. “Just trying to make this night perfect. But I forgot the one thing to tie it all together. “

So they decided just to enjoy the view. It was the sunset hour. The clouds were clinging to the horizon, but still, you could see the yellows and the pinks glow through. They munched on some chocolates that they didn’t hate to heat.

It was when they started to pack up to return to civilization that Messing popped the question.

Messing said he’s been on cloud nine ever since.

Just watch him rotate those quads this week at Skate Canada International.